(Answers to this Paper must be written on the paper provided separately.
You will not be allowed to write during the first 15 minutes.
This time is to be spent in reading the question paper.
The time given at the head of this Paper is the time allowed for writing the answers.
Attempt seven questions in all.
Part I is (Compulsory). All questions from Part I are to be attempted.
A total of five questions are to be attempted from Part II.
The intended marks for questions or parts of questions are given in brackets [ ].

To be supplied with this paper: Survey of India Map Sheet No. 45D/10
and 20 cm of twine

(i) In all Map Work, by a wise use of arrows to indicate positions of countries,
cities and other insertions that you make, you will be able to avoid overcrouxting
parts of the map.
(ii) The extract of Survey of India Map Sheet No. 45D/10 must not be taken out
of the examination hall. It must be handed over to the Supervising Examiner
on the completion of the Paper.
(iii) The Map given at the end of this question paper must be fastened with your
answer booklet.
(iv) All sub-sections of each question must be answered in the correct serial order.

(v) All working including rough work, should be done on the same answer sheet
as the rest of the answer

Study the extract of the Survey of India Map Sheet No. 45D/10 and answer the following questions:

(a) Name and give the four figure grid reference of a settlement where the people of the region meet at least once a year. [1]

(i) In which direction would he be walking?

(ii) Which are the two different kinds of roads that he would be using? [3]

(f) Name four facilities that Anadra has which makes it an important settlement. [2]

(I) Mention two factors which support the following:

(i) The Sipu river is in its middle course

(ii) The rainfall in the region shown in the map extract is seasonal. [4]

(j) What is the distance in kilometres between the distance stone 20 in 1818 and the causeway in 1715 along the metalled road?

On the outline map of India provided:

(a) (i) Name the type of climate prevailing over India.
(ii] Mention any two factors responsible for it. [2]

(b) What is the direction of the summer monsoon? Why? [2]

(c) Give geographical reasons for the following: [3]
(i)Even in summer Shimla is cooler than Delhi.
(ii) The northern plains of India do not freeze in winter.
(iii) Kochi has a lesser annual range of temperature than Agra.

(i) Calculate the mean annual temperature.
(ii) What is the total rainfall during the monsoon season?
(iii) Does the station have a maritime or a continental climate? Give a reason for your answer. [3]

(a) state two methods of controlling the erosion of soil caused by running water. [2]

(c) Mention any three characteristics of black soil which makes the soil fertile.[3]

(d) Give geographical reasons for the following:
(i) Laterite soil is not suitable for cultivation.

(a) Mention two reasons why Tropical Evergreen Forests are difficult to exploit for commercial purposes. [2]

(b) Give two characteristics of tidal forests. [2]

(c) Mention three reasons why forests must be conserved. [3]

(d) Name any three trees found in monsoon deciduous forests and state one use of each of these trees. {3]

(b) Why are inundation canals being converted to perennial canals? Give two reasons. [2]

(c) Give two advantages and one disadvantage that tube wells have over surface wells. [3]

(a) (i)Name two leading states producing Manganese.
(ii) Name one use of the mineral. [2]

(b) (i) Name two varieties of iron ore used in industry.
(ii) How is the low grade iron are utilized? [2]

(c)Give geographical reasons why:
(i) Anthracite is used for domestic purposes
(ii) Oil refineries are located close to oil fields or near ports.
(iii) the location of coal fields is an important factor in industrial development. [3}

(d) Name the mineral:
(i) which is converted to aluminium.
(ii)which is used in the manufacture of cement
(iii) the largest deposits of which are found in Balaghat in Madhya Pradesh. [3l

(a) What is the importance of agriculture in India? Mention two factors. [2]

(b) Name a state which produces short staple cotton. Which climatic and soil conditions favour the cultivation of cotton in the state mentioned? [2]

(c) Give geographical reasons for the following:
(i) Jute has to be retted

(ii)Tea is grown on hill slopes.

(b) Why has the electronics industry grown in importance? [2]

(c) Mention three advantages that a mini steel plant has over an integrated steel plant. [3]

(d) Name:
(i) A city on the east coast of India which has a ship building yard.
(ii) The iron and steel plant set up with German collaboration.
(iii) A city which has a plant manufacturing Maruti cars. [3]

(a) Why has the importance of inland waterways declined? Give any two reasons. [2]

(b) Name two areas where helicopter services may be used? [2]

(c) Mention any three problems being faced by the Indian Railways. [3]

(d) What is the Golden Quadrilateral? Mention any two ways in which it will help in the economic development of the country. [3] 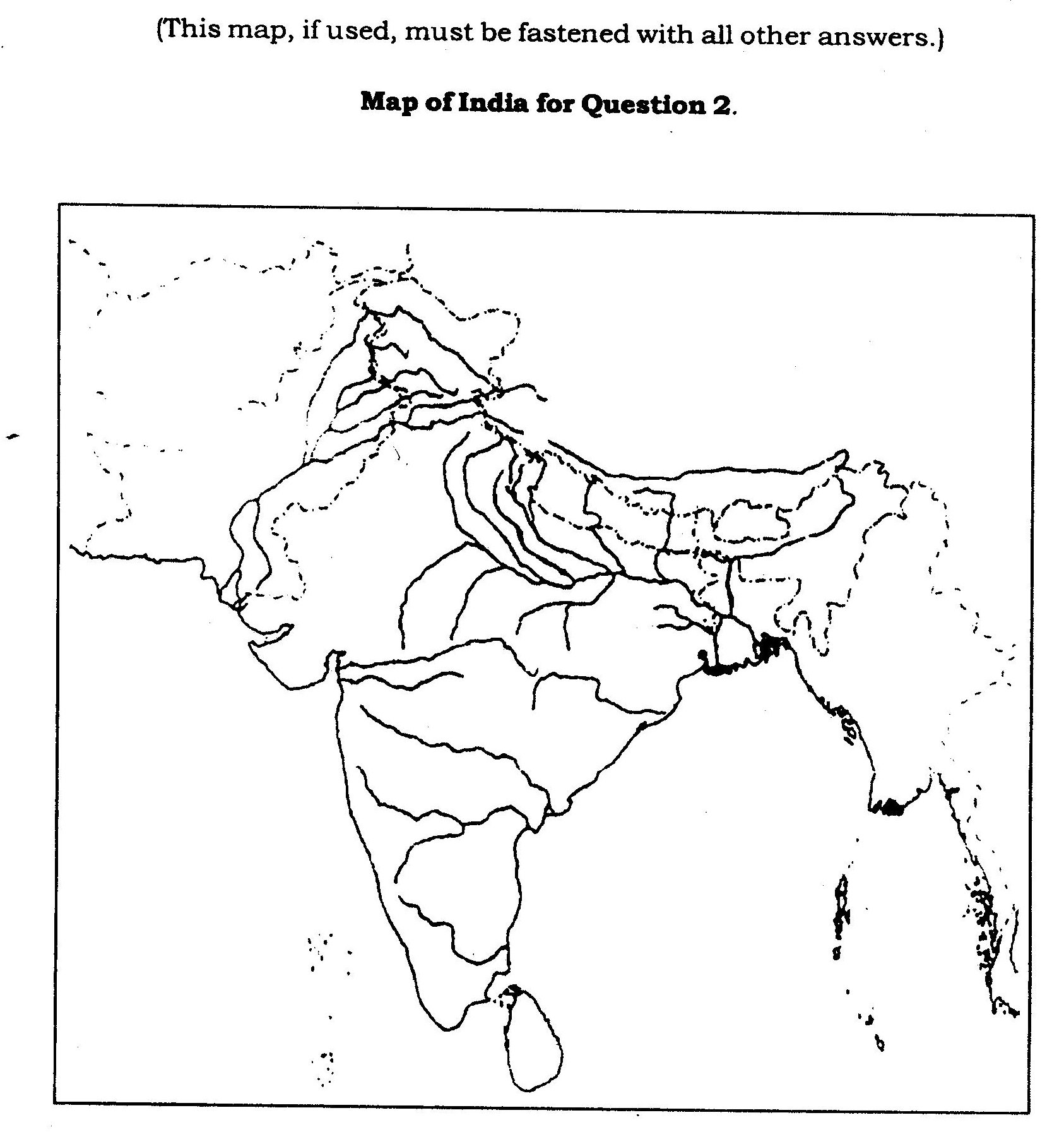