It involves substitution of (-OH) group by halogen atom

i.    The reactivity of halogen acids for given alcohol in the above reaction order HI >HBr>HCl

ii.   Of alcohols for the halogen reactivity order is tertiary > secondary > primary.

Reasons of order of reactivity:-

iv.  Order of stability of carbocation is 3o> 2o> 1o that’s why reactivity order follows the same as discussed above

ii. Bromoalkanes are obtained by mixing a suitable alcohol with constant boiling hydro bromic acid (48%) in presen of con. H2SO4

2.  By Action of PhosPhorus Halides:-

They gives (80%) yield of haloalkenes

METHODS OF PREPARATION OF HALOALKANES-II

i. From alkenes and alkynes:-

ii.   In presence of the peroxide, the addition of HBr (notHCl and HI) to unsyimmetrical alkenes takes place contrary to markoniekove’srulemeas

1 – haloproduct will be major in quantity.

This is also called as peroxide or kharasch effect 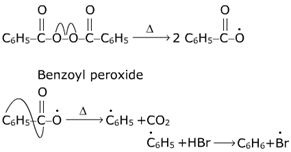 6. From Alkanes By Free Radical Halogenation:-
i.

This reaction is called swartsreaction.

Iodoalkanes can be easily prepared from the corresponding chloroalkanes by heating with sodium iodide in acetone. 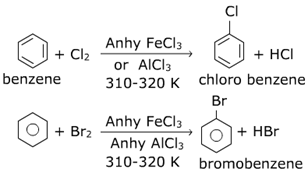 i. Generation of electrophile:-

iii. Loss of proton to give final product:-

METHODS OF PREPARATION OF HALOARENES-II 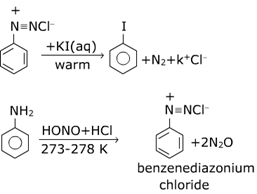