In haloarenes the lone pair of electrons on halogen atom is delocalized on the benzenering.

Since aryl halides are stabilizes by resonance hence the energy of activation for displacement of halogen from aryl halide is much greater than alkyl halides thus they not under go Nucleophilic Substitution reaction.

Since in haloarenes the C atom to which the X group is attached is SP2 hybridized thus it is become difficult to replace it by the Nucleophile.

Since arenes and Vinyl halides are electron rich molecules due to presenceof n bonds, they repel Nucleophile attacking them.

Due to low reactivity Nucleophilic substitution reactions in arylhalides occurs under drastic conditions.

The presence of electron withdrawing groups such as –NO2, –CN at O and P– positions of haloarenes, w.r.t halogen greatly activates the halogen towards Nucleophilic Substitution

The presence of NO2 groups at O – and P positions withdraws electrons from benzene ring and Facilitates the attack of Nucleophile on haloarenes. 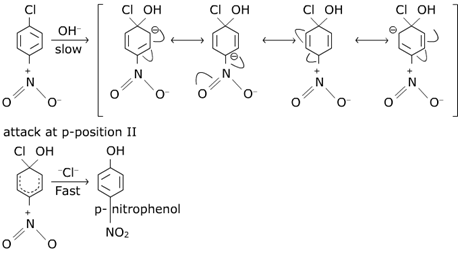 Thus carbocation is stabilized by resonance 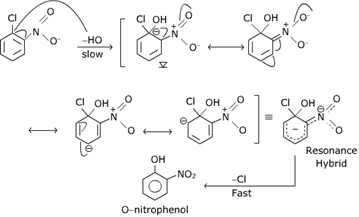 i).  IInd structure and V structure respectivety in cases of P – chloronitrobenzene and O –chloronibenzenecarries negative change on carbon atom bearing NO2 group.

The halogen group is deactivating the haloarenes Facillitakes the further substitution at the ortho and para positions. 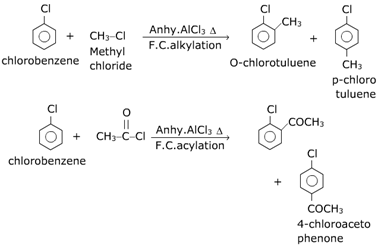 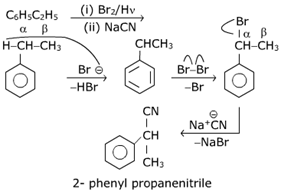 3. Write the product of given reactions