by Anwesha Bose
in 12th Class 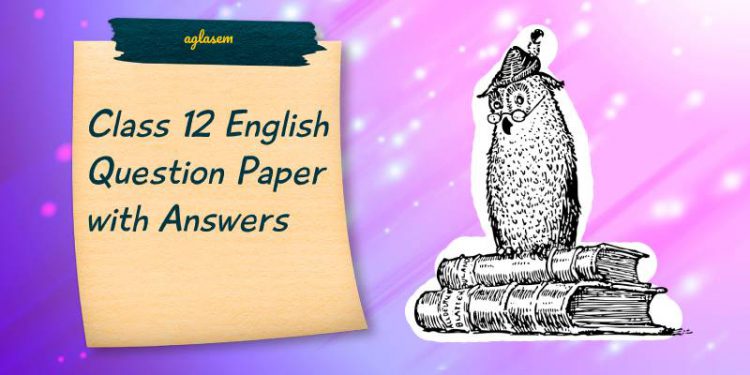 CBSE conducted the class 12 board exam 2020 English subject paper today, on February 27, 2020. Now after the exam, the question paper and proposed solutions by teachers are available here at AGLASEM. If you are a 12thee, then you can check this out to get an idea about the answers, and if you are feeling anxious, this will help you ease down. Note that however, marking will be in tune with the official CBSE board exam key. Wish you the best, for your class 12 result!

Board Exam 2020 Most Important Resources

Check out the questions asked in class 12 English exam, as well as probable answers of them.

First, Here Is The Question Paper of CBSE Class 12 Board Exam 2020 English Subject

(a) The first green corridor in India was created in?

(b) The organisation which is framing a proposal to airlift cadaver organs is?

(c) The onerous task that the author is talking about in PARA 1 is ?

Ans : (iii) to carry the harvested organs in the shortest possible time.

(d) Most of the people do not go for heart transplant is?

Ans : (iv) the cost is prohibitive

(e) Most states refer organ transplants to big hospitals because?

Ans : (i) they do not have well trained experts

(f) Heart retrieved from body is alive for —

(a) The traditional method of transporting organs by road is refereed to as green corridor.

(b) To help those who are awaiting a life saving transplant of an organ.

(c) The Chennai Traffic Police reached destination withing 11 minutes during peak hours of traffic and save the life of a 9 year old girl. This was a noble task as they saved a precious life.

(d) Cadaver Organs have a short span of life and hence transplant should be done in a few golden hours only.

(e) The heart transplant costs about 15-20 lakh per operation and the post operative treatment and medicines costs Rs. 30,000 per month.

Pick out the words from passage

4. On the basis of you reading do note making and use heading and subheadings with abbreviations?

Title – Pros and Cons of a Television

The television affects one’s life in both good and bad ways, it is good for the one who keeps a check on what he watches. It however benefits because it increases knowledge by showing programmes based on study and medicine . it also helps people to do their daily informal practice of language and increases vocabulary. The disadvantages of watching of television in children is that they watch for more than 6 hours which causes poor concentration . Kids then only pay attention during commercials. It affects adults negatively because they start comparing their lives to actors and say that life is boring. Violence is not so strange for them and they become very sad because they cannot solve their issues as fast as actors.

This is to inform all the students that a book fair is being organised on the 7th February to 14th February, 2020 at Pragati Maidan. If you too want to dive into the world of fictions and non-fictional stories, informative books and autobiographies, please meet me in person so that I can write your names and class by 4:00 pm today.

4 (b) Write a Letter to the editor highlighting the unfair practice. You are Rahul/ Rashmi

Subject : Banning overcrowding of 50-60 students in one section

I Rashmi, a social worker from Delhi would like to bring your attention towards the unfair practice of admitting somewhat 50-60 students in one class just for the sake of extra money by schools. Even the reputed schools are playing with the future of the students by this inappropriate teacher-student ratio.

Thus, I request you to throw some light on this topic so that we can save the academic standards from getting adversely affected.

(a) What was the contract between the sharecroppers of Champaran and their landlords?

Most of the arable land in the Champaran district was divided into large estates owned by Englishmen and worked by Indian tenants. The chief commercial crop was indigo. The landlords compelled all tenants to plant three twentieths or 15 per cent of their holdings with indigo and surrender the entire indigo harvest as rent. This was done by long-term contract.

(b) What were the positive qualities of Subbu that the writer admired?

He had the ability to look cheerful at all times even after having had a hand in a flop film. He always had
work for somebody — he could never do things on his own but his sense of loyalty made him identify himself with his principal completely and turn his entire creativity to his principal’s advantage. He was tailor-made for films. Here was a man who could be inspired when commanded.

(e) How has Mr. Lamb kept himself open to everyone?

I don’t mind who comes into the garden. The gate’s always open, Mr. Lamb says. He has kept himself open to everyone because he is lonely but positive and is interested in anybody. Anything. There’s nothing God made that doesn’t interest him.

(f) What distracted Bama the most on her way back to the school?

It would take Bama from half an hour to an hour to dawdle along, watching all the fun and games that were going on which included The performing monkey; the snake which the snakecharmer kept in its box and displayed from time to time; the cyclist who had not got off his bike for three days, the rupee notes that were pinned on to his shirt to spur him on; the spinning wheels; the Maariyaata temple,
the huge bell hanging there; the pongal offerings the dried fish stall by the statue of Gandhi; the sweet stall, the stall selling fried snacks, and all the other shops next to each other. And then according to the season, there would be mango, cucumber, sugar-cane, sweet-potato, palm-shoots, gram, palm-syrup and palm-fruit, guavas and jack-fruit.

(g) How was Gondwana different from today’s world?

Things were quite different then: humans hadn’t arrived on the global scene, and the climate was
much warmer, hosting a huge variety of flora and fauna. For 500 million years Gondwana thrived

(a) Life of bangle makers of Firozabad shows the grinding state of poverty and traditions that condemn thousands of people to live a life of misery?

His dream looms like a mirage amidst the dust of streets that fill his town Firozabad, famous for its bangles. Every other family in Firozabad is engaged in making bangles. It is the centre of India’s glass-blowing industry where families have spent generations working around furnaces, welding glass,
making bangles for all the women in the land it seems .None of them know
that it is illegal for children like him to work in the glass furnaces with high temperatures, in dingy cells without air and light.

After the Maharaja left, the hunters went to take a closer look at the tiger. The
tiger looked back at them rolling its eyes in bafflement. The men realised that the tiger
was not dead; the bullet had missed it. It had fainted from the shock of the bullet
whizzing past. One of the hunters took aim from a distance of one foot and shot
the tiger. This time he killed it without missing his mark. Maharaja was out for purchasing a birthday gift for his son and finally he spotted a wooden tiger in a toyshop and decided it was the perfect gift. On that day father and son played with that tiny little wooden tiger. It had been carved by an unskilled carpenter. Its surface was rough; tiny slivers of wood stood up like quills all over it. One of those slivers pierced the Maharaja’s right hand The next day, infection flared in the Maharaja’s right
hand. In four days, it developed into a suppurating sore which spread all over the arm. In this manner the hundredth tiger took its final revenge upon the Tiger King.

This Is How Students Reacted To The Class 12 English Exam

The exam pattern meaning the marking scheme of the paper and the distribution of the questions were as per the guidelines of CBSE. The paper pattern was as follows, in case candidates need to check it to calculate their estimated score using the solutions above:

Total number of questions in the paper: There were 10 questions in all with sub divisions and all questions were compulsory to attempt.

Choices: There were no overall choices in the paper. But choices were given in the subdivisions of the questions.

Distribution of marks and questions in each section:

CBSE Gives Urgent Notice For 2-7 March 2020 Board Exams, Says Will Not Postpone More Papers, Exam On Later Date For Students Unable To Attend