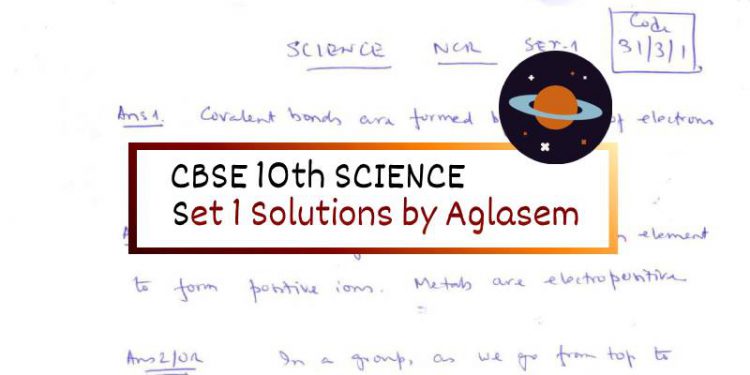 Central Board of Secondary Education (CBSE) conducted the science paper, for the 2020 board exams, on March 4, 2020. After the exam now the solutions to the paper have been compiled, so that students can know answers to questions asked in the paper. Questions asked, their proposed answers, as well as solutions by AGLASEM are here on this page. You can go through it all to calm down yourself over your exam performance. And best wishes for your result!

Qs 1. The number of valence electrons in a Nitrogen atom

Qs 3. Answer questions based on paragraph (on Mendeleev)

Ans a). Mendeleev’s Periodic Law states that the physical and the chemical properties of the elements are a periodic function of their atomic masses.

Ans b). Mendeleev left some gaps in the periodic table as mendeleev’s classification could not assign position to isotopes.

Qs 4. Answer questions based on paragraph (on resource utilization)

Ans c). If we discontinue the use of plastic, an environment-friendly substitute can be provided by effective plastic waste collection and methods of its disposal.

Qs 5. Which statement is correct about human circulatory system?

Option a. Blood transports only oxygen and not carbon dioxide.
Option b. Human heart has five chambers.
Option c. Valves ensure that the blood does not flow backwards.
Option d. Both oxygen-rich and oxygen-deficient blood gets mixed in the heart.

Qs 7. Fertilization is the process of

Qs 8. If a person has five resistors each of value 1/5 ohm, then the maximum resistance he can obtain by connecting them is

OR Qs 8. The resistance of a resistor is reduced to half of its initial value. In doing so, if other parameters of the circuit remain unchanged, the heating effectes in the resistor will become

Qs 10. Which one of the following statements is not true about nuclear energy generation in a nuclear reactor?

Option a. Energy obtained by a process called nuclear fission.
Option b. The nucleus of Uranium is bombarded with high energy neutrons.
Option c. A chain reaction is set in the process.
Option d. In this process a tremendous amount of energy is released at a controlled rate.

OR Qs 10. The biggest source of energy on Earth’s surface is

Qs 11. Food web is constituted by

Qs 12. Choose the incorrect statement from the following

Option a. Ozone is a molecule formed by three atoms of oxygen
Option b.
Option c.
Option d.

Ans 15. a) A bright yellow precipitate of lead iodide is precipitated

Rancidification. Rancidification is the process of complete or incomplete oxidation or hydrolysis of fats and oils when exposed to air, light, or moisture or by bacterial action.

Prevention :
1.By keeping the food in airtight container.
2.By lowering the temperature.
3.By vacuum packing.

Ans 18. Nerve Impulse and Structure of Special Proteins in Muscle Fibre. On seeing the prey, an impulse is sent from the brain to the muscles in it’s limbs so that the cheetah can run towards the prey. Muscles have special proteins that change both their shape and their arrangement in the cells, new arrangement of the proteins give different forms to the muscle cells, i.e. Shorter or Larger form.

Therefore, the cheetah is able to run after the prey due to the arrangement of cellular components (proteins) in the muscles.

Ans 20. Evolution is a gradual and continuing process of change that occurs over a period of time, due to slight variations in genetic compositions as well as changes in environment, leading to formation of new species.
Evolution cannot be equated with progress because it is used to describe the slow and gradual process by which living organisms have undergone changes from the simplest unicellular forms of life to the most complex multicellular forms that can be seen today.

Organs or features can be adopted to new . functions during evolution Example – Feathers were developed form providing insulation in cold weather (in dinosaurs) but in birds they were adopted for flight.

Ans 23 a).
b). It happens when a person is not able to see both near distant & far distant objects.
c). Bifocal Lenses

b). Peristalsis mainly causes movement of food inside the alimentary canal. The contraction and expansion of oesophagus is known as Peristalsis movement.

Ans 30. a).Fleming’s left-hand rule states that if we stretch the thumb, the forefinger and the middle finger of our left hand such that they are mutually perpendicular to each other.

d).The main function of the earth wire is to conduct the leaking current from the electrical appliance to the ground . It is connected to the outer metallic body of the appliance .
It is necessary to earth metallic appliances , as it protects the user from electric shocks by transferring the current to the earth.

These answers are in the order they appeared in 31/3/1, 31/4/1. If you got another set 1 paper, please match questions with answers, rather than question number with answer. If none of the questions provided here came in your paper, please send your paper to [email protected] We will try to provide solutions to your paper as well..

How was your paper?

Let us know in comments below, how your paper went!