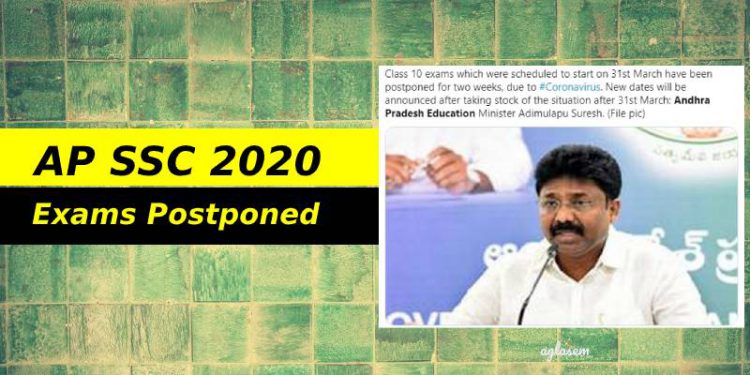 AP SSC exam 2020 hereby stands postponed. Andhra Pradesh Education Minister, Adimulapu Suresh has officially confirmed this to the press. In Andhra Pradesh, the class 10th exams were supposed to start on March 31, 2020. However now, they will not and fresh dates will be announced on or after March 31, 2020, after analysing the COVID-19 situation.

“Class 10 exams which were scheduled to start on 31st March have been postponed for two weeks, due to #Coronavirus. New dates will be announced after taking stock of the situation after 31st March: Andhra Pradesh Education Minister Adimulapu Suresh.”

The initial time table is shown below. New dates will be announced.

Now that exam dates will be changed, students want to know whether fresh hall tickets will be released. As of now there is no clarity on the matter. Students should keep visiting the official website bseap.org and get the latest hall ticket as released by the board.

On 20th March, that is just four days ago, the Andhra Pradesh Board of Secondary Education had released the examination admit cards. Even now many students are in the process of downloading it.

Despite delay in exams, students are advised to download their admit cards without delay.

As exams will undergo significant delay, and also because evaluation process is bound to get hampered by the COVID-19 situation. Therefore it is anticipated that there will be some delay in declaration of results as well.

However, by taking some alternate measures like reducing number of gap days between exams, exam schedule may again be brought back on track. Last year the result was announced on 13th May.