Mammachi had started making pickles commercially soon after Pappachi retired from government service in Delhi and came to live in Ayemenem. The Kottayam Bible Society was having a fair and asked Mammachi to make some of her famous banana jam and tender mango pickle. It sold quickly, and Mammachi found that she had more orders than she could cope with. Thrilled with her success, she decided to persist with the pickles and jam, and soon found herself busy all year round. Pappachi, for his part, was having trouble coping with the ignominy of retirement. He was seventeen years older than Mammachi and realised with a shock that he was an old man when his wife was still in her prime.

Though Mammachi had conical corneas and was already practically blind, Pappachi would not help her with the pickle-making, because he did not consider picklemaking a suitable job for a high-ranking ex-government official. He had always been a jealous man so he greatly resented the attention his wife was suddenly getting. He slouched around the compound in his immaculately tailored suits, weaving sullen circles around mounds of red chillies and freshly powdered yellow turmeric, watching Mammachi supervise the buying, the weighing, the salting and drying, of limes and tender mangoes. Every night he beat her with a brass flower vase. The beatings weren’t new. What was new was only the frequency with which they took place. One night Pappachi broke the bow of Mammachi’s violin and threw it in the river.

Then Chacko came home for a summer vacation from Oxford. He had grown to be a big man and was, in those days, strong from rowing for Balliol. A week after he arrived he found Pappachi beating Mammachi in the study. Chacko strode into the room, caught Pappachi’s vase-hand and twisted it around his back.

‘I never want this to happen again,’ he told his father, ‘Ever.’

For the rest of that day Pappachi sat in the verandah and stared stonily out at the ornamental garden, ignoring the plates of food that Kochu Maria brought him. Late at night he went into his study and brought out his favourite mahogany rocking chair. He put it down in the middle of the driveway and smashed it into little bits with a plumber’s monkey wrench. He left it there in the moonlight, a heap of varnished wicker and splintered wood. He never touched Mammachi again. But he never spoke to her either as long as he lived. When he needed anything he used Kochu Maria or Baby Kochamma as intermediaries.

In the evenings, when he knew visitors were expected, he would sit on the verandah and sew buttons that weren’t missing onto his shirts, to create the impression that Mammachi neglected him. To some small degree he did succeed in further corroding Ayemenem’s view of working wives.

He bought the skyblue Plymouth from an old Englishman in Munnar. He became a familiar sight in Ayemenem, coasting importantly down the narrow road in his wide car, looking outwardly elegant but sweating freely inside his woollen suits. He wouldn’t allow Mammachi or anyone else in the family to use it, or even to sit in it. The Plymouth was Pappachi’s revenge.

Pappachi had been an Imperial Entomologist at the Pusa Institute. After Independence, when the British left, his designation was changed from Imperial Entomologist to Joint Director, Entomology. The year he retired, he had risen to a rank equivalent to Director. His life’s greatest setback was not having had the moth that he had discovered named after him.

It fell into his drink one evening while he was sitting in the verandah of a rest house after a long day in the field. As he picked it out he noticed its unusually dense dorsal tufts. He took a closer look. With growing excitement he mounted it, measured it and the next morning placed it in the sun for a few hours for the alcohol to evaporate. Then he caught the first train back to Delhi. To taxonomic attention and, he hoped, fame. After six unbearable months of anxiety, to Pappachi’s intense disappointment, he was told that his moth had finally been identified as a slightly unusual race of a well-known species that belonged to the tropical family, Lymantriidae.

The real blow came twelve years later, when, as a consequence of a radical taxonomic reshuffle, lepidopterists decided that Pappachi’s moth was in fact a separate species and genus hitherto unknown to science. By then, of course, Pappachi had retired and moved to Ayemenem. It was too late for him to assert his claim to the discovery. His moth was named after the Acting Director of the Department of Entomology, a junior officer whom Pappachi had always disliked.

In the years to come, even though he had been illhumoured long before he discovered the moth, Pappachi’s Moth was held responsible for his black moods and sudden bouts of temper. Its pernicious ghost—grey, furry and with unusually dense dorsal tufts—haunted every house that he ever lived in. It tormented him and his children and his children’s children.

Until the day he died, even in the stifling Ayemenem heat, every single day, Pappachi wore a well-pressed threepiece suit and his gold pocket watch. On his dressing table, next to his cologne and silver hair brush, he kept a picture of himself as a young man, with his hair slicked down, taken in a photographer’s studio in Vienna where he had done the six-month diploma course that had qualified him to apply for the post of Imperial Entomologist. It was during those few months they spent in Vienna that Mammachi took her first lessons on the violin. The lessons were abruptly discontinued when Mammachi’s teacher, Launsky- Tieffenthal, made the mistake of telling Pappachi that his wife was exceptionally talented and, in his opinion, potentially concert class.

Mammachi pasted, in the family photograph album, the clipping from the Indian Express that reported Pappachi’s death. It said:

Noted entomologist, Shri Benaan John Ipe, son of late Rev.E. John Ipe of Ayemenem (popularly known as Punnyan Kunju), suffered a massive heart attack and passed away at the Kottayam General Hospital last night. He developed chest pains around 1.05 a.m. and was rushed to hospital. The end came at 2.45 a.m. Shri Ipe had been keeping indifferent health since last six months. He is survived by his wife Soshamma and two children.

At Pappachi’s funeral, Mammachi cried and her contact lenses slid around in her eyes. Ammu told the twins that Mammachi was crying more because she was used to him than because she loved him. She was used to having him slouching around the pickle factory, and was used to being beaten from time to time. Ammu said that human beings were creatures of habit, and it was amazing the kind of
things they could get used to. You only had to look around you, Ammu said, to see that beatings with brass vases were the least of them.

Arundhati Roy, an architect by training, is a novelist and screen writer. Her first novel, The God of Small Things, from which this extract has been selected, is the winner of the 1997 Booker Prize, a prestigious literary award. She now lives in New Delhi and is an activist.

2. How does Mammachi stand out as an independent and resilient woman in the text?

3. Why does John Ipe consider retirement to be a dishonour?

4. What was the underlying reason for John Ipe’s disgust with the world?

TALKING ABOUT THE TEXT

1. Chacko’s firmness in dealing with the irrational behaviour of his father.

2. The contrast between the outward elegance of a person and his private behaviour.

3. Approval from the outside world and approval within the family.

1. How does the author succeed in raising crucial social issues not through open criticism but through subtle suggestion?

2. Within a few pages the author has packed the important events in the lives of John Ipe and his wife. Discuss how conciseness and economy of expression can achieve effective portrayal of entire lives.

1. Entomologist and lepidopterist are mentioned in the text and you must have guessed the meanings of these words or found them out from the dictionary.

Now match the kinds of scientists given below with the work they do:

2. A short report announcing the death of a person in a newspaper is called an ‘obituary’. Where would you find the following 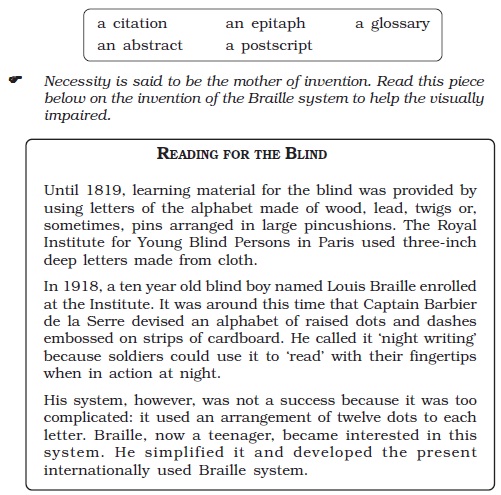