Versatility of carbon :Carbon is known metal and occurs in free as well combined state in nature.

Carbon  has 4  valance electrons carbon can form an anion c-4 by gain of electons.It can also form of cations C+4 by loss of electron.IT can share its balanced electrons with other carbon atoms or atoms of non metal and forms covalent bonding.

compounds having double and        triple bonds.

Isomerism:The phenomenon of existence of compounds in two or more forms with same molecular formula but different structure.

Functional group: An atom or groups of atoms which makes a carbon compounds reactive and decide its properties.

HOMOLOGOUS SERIES:A series of compounds in which the same functional group substitude for hydrogen in a carbon chain,such that successive compounds differ by CH2 groups e.g CH4 ,C2H6,C3H8 etc.

ESTERIFICATION REACTION:The reaction between carboxylic acid and   an alcohol in the presence of con. Suphuric acid to form a sweet smelling substance ester.  .e.g

SOAP AND DETERGENT: Soap is sodium and potassium salt of long chain of carboxylic acid .They foam lather with soft water only.

Detergent are ammonium or sulphonate salts of long chain carboxylic acid .they even remain effective in hard water and foam lather. 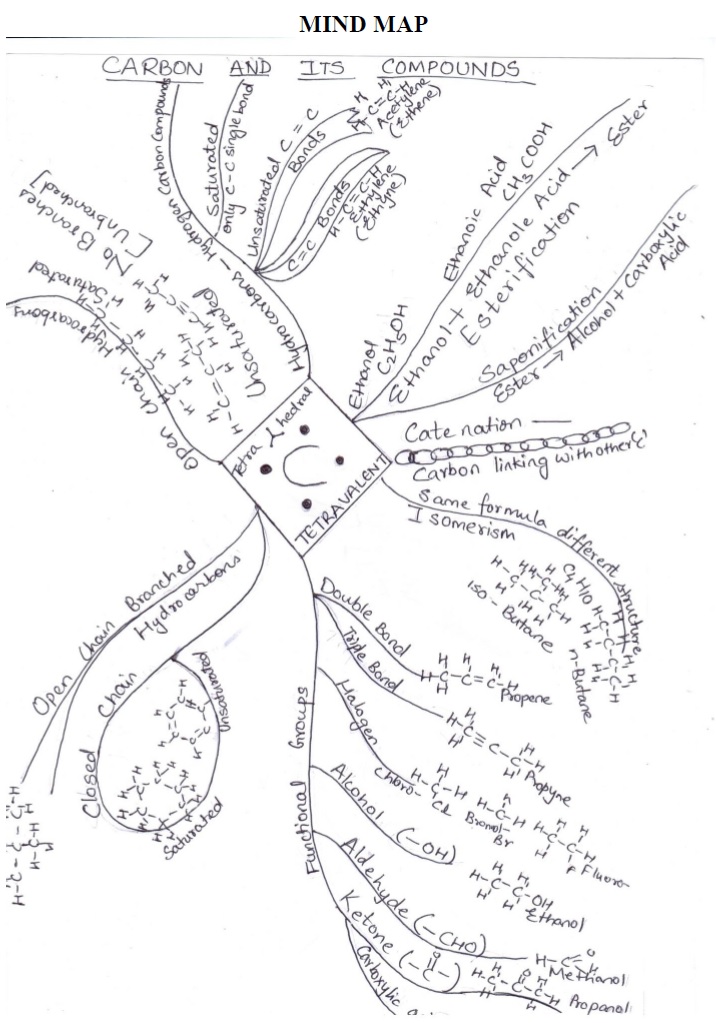 Topic 1: Carbon and its compounds

5. Name the product obtained when ethanol is oxidized by either chromic anhydride or alkaline potassium permanganate.   1

6. Write the chemical equation repressing the preparation reaction of ethanol from ethane.   1.

7. Name the 2 elements which are present both in CNG and Petroleum     2

9. Write the IUPAC name of the next homologous of CH3OHCH2CH3.  2

11.Describe a chemical test to distinguish between ethanol and ethanoic acid.   2

12. Give the name of functional groups

13.Why does carbon form compounds mainly by covalent bonding ?    2

14.Give a chemical test to distinguish ethanol from ethanoic acid.  2

15 Allotropy is a property shown by which class: substances elements compounds or mixtures ? give one examples of allotropy.     2

16  . How may be the following be obtained from ethanol ? express giving chemical equations.

17. Describe  with chemical equation how ethanoic acid may be obtained from.

19.Distinguish between esterification and saponification reactions of organic compounds   3.

20  Explain the structure of graphite in term of bonding and give one property based on this structure.  3

21  Name the organic acid present in vinegar .write a chemical equation which represents the commercial method for the preparation of this acid from methanol.  3

a .Identify the  organic compound.

b. Name the gas evolved.

C. How will you test the gas evolved.

d. Write the chemical equation for the above reaction.

e. List two important uses of the above compound.

3.a.What are the various possible structure formulae of a compound having molecular formula C3H6O .

b. Also give the IUPAC names of the above possible compounds.

c.What is the similarity in these compounds?

4.A mixture of oxygen and ethyne is burnt for welding ,can you tell why a mixture of ethyne and air is not used .

5.Two carbon compound A and B have molecular formula C3H8 and C3H6 respectively. Which one of the two is most likely to show addition .justify your answer .Explain with the help of a chemical equation ,how an addition reaction is used in  vegetable ghee industry.

6.1ml glacial acetic acid and 1ml of ethanol are mixed together in a test tube. Few drops of concentrated sulphuric acid is added in the mixture are warmed in a water bath for 5 min.

b.Represent the above change by a chemical equation .

c.What term is given to such a reaction.

d.What are the special characteristics of the compound formed.

7.An organic compound ‘X’with a molecular formula C2H6O undergoes oxidation in the presence of alkaline KMnO4 and forms the compound ‘Y’.

B.Write your observation when the compound ‘X’ is made to react with compound ‘Y’ which

is used as a preservative for pickles.

2.What is the general formula of alkynes.?

4.Name the product other than water formed on burning of ethanol in air.

5 Give the IUPAC name of the following compounds.

2. Which of the following solution of acetic acid in water can be used as vinegar used in pickles?

3.The suffix used for naming an aldehyde is

4.When acetic acid reacts with ethyl alcohol ,we add  cons,H2SO4,its acts as……….and the

5.2ml of ethanoic acid was taken in each of the three test tubes.A,B and C,and 2ml.4ml and 8ml water was added to them ,respectively .A clear solution is obtained in:

a. Test tube A only.

c.Test tubes B and C only.

d. All the test tubes.

6.2 ml pf acetic acid was added in drops to 5ml of water it was noticed that:

a.The acid formed a separate layer on the top of water.

b.Water formed a separate layer on the top of the acid.

7.A few drops of ethanoic acid was added to solid sodium carbonate .The observation made was that

8.Acetic acid , when dissolved in water, it dissociates into ions reversibly because    it is a :

9.Which of the following hydrocarbon can show isomerism?

10.Combustion of hydrocarbon is generally accompanied by evolution of

2.A compound which is basic constituent of many cough syrups.

4.A sweet smelling substance formed by the reaction of alcohol and carboxylic acids.

5 Gas released when sodium metal is dropped in ethanol.

6.The functional  group present in methanol.

8.The number of single covalent compounds present in pentane.

11.Self linking property of carbon.

12.Product formed by dehydration of ethanol in conc. Sulphuric acid.

13.Alcohol whose intake in small quantities can be lethal.

15.Type of reactions shown by alkanes.

1.To Study the saponification reaction for the preparation of soap in the laboratory using any vegetable oils.

CARBON AND ITS COMPOUNDS

3..Testing the hardness of water.

4..Collect information about artificial ripening of fruits by ethylene.

1.Role of esters in everyday life.

2. Condemning the use of alcohol as a social practice.

3.Use of biodegradable synthetic for cleansing purpose.