Gist of the lesson:

Only three triads were identified from the element known at that time .hence this classification was not useful.

He arranged the element in the order of increasing  atomic masses starting with hydrogen(least atomic mass ) and ended with thorium having atomic mass  56 . According to him ,the properties of every eighth element are similar to the  first element . Iit was compared to music notation sa,re ,ga ,ma, pa ,da ,ni ,sa,and thus the name Newlands law of octaves(notes of music ).

1.  It was applicable only for lighter element having atomic mass upto 40 amu ,i.e.upto calcium .

2.   He believed that only 56 elements existed in nature but later on more element were discovered whose properties did not fit into Newland  law of octaves.

3.   Some elements having different properties were grouped together  like cobalt and nickel  have been placed  with halogens .

Due to above limitations, Newland law of octave was rejected

He arranged the elements in order of increasing atomic masses , similarity in physical and chemical properties of element . properties of hydrides and oxides of different element were studied and elements with similar properties were grouped together .

He classified the elements in table consisted of vertical columns called groups and horizontal rows called periods . there were 7 groups in table  and group is subdivided into subgroups A and B except group 7 which has three sets of elements in  4th , 5th , 6th period.

1.   Position of hydrogen was not assigned correctly .

2.   No separate position has been given to isotopes of an element .

Mosely modified the Mandelleve’s periodic table by taking atomic number as the  fundamental property instead of atomic mass.

Elements in group one are called alkali metal s.

Elements in group 17 are called halogens .

Significance of group in the periodic table is that an element  in a group has same number of valance electron ,valency and thus identical chemical properties .

The number of shell present in the element indicates the period to which it belongs .

It is defined as the combing capacity of an atom of an element to acquire noble gas configuration. it is equal to the number of electron lost , gained or shared during the formation of chemical compound .

It is defined as the distance from the centre of the nucleus to the outer most cell of atom . it is generally expressed in pico meter ( pm) .

On moving down the group the atomic radii increases.

Because on moving down the group a new energy shell is added which increases the distance between the outermost electron and the nucleus . All though the nucleus charge also increases , but it is compensated by the additional shell being added thus , increasing the size of the atom .

Across the period the atomic radii decrease. Due to the increase nuclear charge , the pull on the electron increases and hence, they are pulled closer to the nucleus thus, decreasing the atomic size .

Oxides and its nature. Metal reacts with oxygen to form oxides by loss of electrons. These oxides on dissolution in water from bases.

Down the group reactivity of metal  increases  as the tendency to lose electron increases due to the increased atomic size .

Reactivity of non metals decreases down the group because of the increased atomic size and the tendency to gain electron decreases. 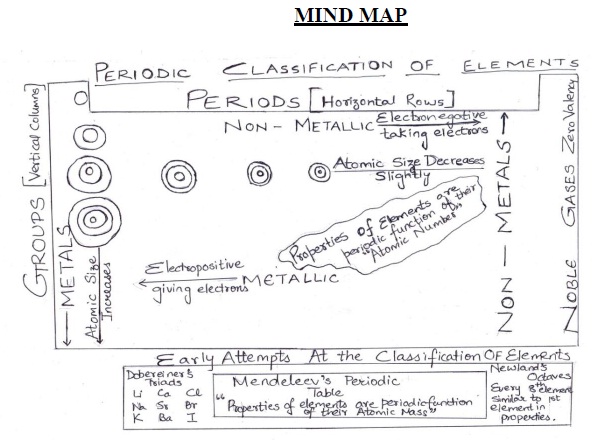 i)the terminating member in a period .

Q.7Give reason as to why the atomic radii of elements increase in a group while moving from top to bottom ?     (2)

Q.11 in a group reactivity of metals increases while those of non metals decreases . Explain.  (2)

Q.12 elements in a group of periodic table have similar chemical properties why (2)

Q.14 write the electronic configuration of atoms of

ii)why is fluorine is  more reactive than chlorine ?

iii)which is smaller in size Cl or Ar ?

iv)which is smaller in size Li or F ?

ii) Whether it is a metal or non-metal?

iii) Whether it is bigger or smaller in size then an element of atomic no.18?

iv) What type of bonds it will form with elements of group 18?

Q.1 an element has two electron in its M shell:

i) Identify the element. ?

ii) What type of ion will it form ?

iii) What will be the formula of its chloride ?

iv) Predict the solubility of its chloride ?

Q.2 which among the following elements whose atomic number are given below belong to the

Q.3 element X with atomic 12 and element Y with atomic number 17 reacts with hydrogen to form

hydrides . Which of them is expected to have high melting points?

Q.4 why is position of hydrogen not justified in modern periodic table?

Q.2 Name a metal in making cans and a member of group14.

Q.3Name the most electronegative element in the periodic table.

Q.4 Name the horizontal rows in the periodic table .

Q.5 on moving across the period , atomic size of the element increase or decrease.

Q.6 who gave the classification on the basis of musical note .

Q.7Name two elements belonging to group one which can be cut with the help of knife .

Q.8 what name is given to the elements belonging to group 2 of the periodic table and why?

Q.10 Name the highly reactive metal that give violet colour to flame.

A) Drawbacks of Mendeleev’s and modern periodic table.

B) Achievements of Mendeleev’s and modern periodic table.

1. Modern Periodic Table based on the similarity of properties of elements

2. Contribution by various Scientists towards the development of Periodic Table.

2.Make an outline sketch of the Modern Periodic Table.