As you have studied in the previous section the molecules of a gas are always in motion and are colliding with each other and with the walls of the container. Due to these collisions the speeds and the kinetic energies of the individual molecules keep on changing. However at a given temperature, the average kinetic energy of the gas  olecules remains constant.

where m is the mass of the molecule.

of the gas will be

If the following term

Then the average kinetic energy is given by

where c is given by

This ‘c’ is known as root-mean-square speed. As the name implies, to calculate c, first take the squares of the individual speeds, then their mean and finally the square root of the mean.

It can be shown that c is related to temperature by

In the case of gases, one also talks of two other speeds, namely, average speed and most-probable speed.

The average speed (c) at a given temperature is the arithmetic mean of the speeds of different molecules of the gas. i.e,

The relationship between average speed and temperature T is given by

The three types of molecular speeds, namely, most probable speed (c*), average speed (c) and root mean square speed (c) of a gas at a given temperature are related to each other as follows:

It follows from the above relationships that

Calculate the root mean square, average and most probable speeds of oxygen molecules at 27°C.

Expressions to be used:

For a given gas, at a given temperature, the distribution curve of molecular speeds is shown in Figure 5.7.1 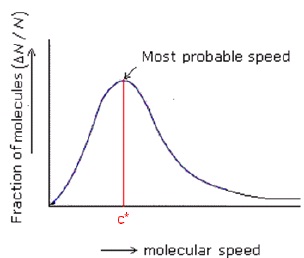 (i) The fraction of molecules having too low or too high speeds is very small.

(ii) There is a certain speed for which the fraction of molecules is maximum. This speed is known as most probable speed.

(iii) The most probable speed of a gas, is the speed possessed by the maximum number of molecules of the gas at a given temperature and it corresponds to the peak of the curve.

It means that at the same temperature, lighter gases shall move faster than heavier gases as is evident from the distribution curves of chlorine and nitrogen gases in Figure 5.7.2. 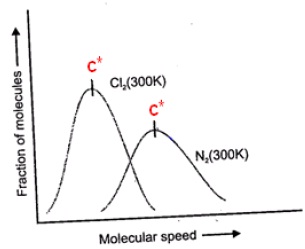 In Figure 5.7.3.are given the Maxwell Boltzmann distribution curves of a gas at three different temperatures T1, T2 and T3 such that T1 > T2 > T3. 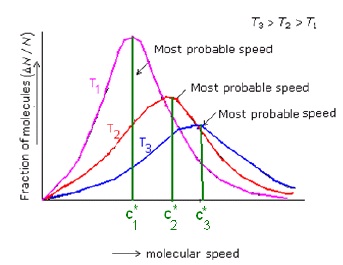 It may be noted that the total area under each of the curves remains the same as the sum of fractions of molecules remains unaltered on changing the temperature.

You have already studied in the previous sections that the first law of thermodynamics deals only with the law of conservation of energy and it gives no information about the criteria for feasibility of a given physical or chemical process. This law is always obeyed whether a given process occurs on its own or is made to occur with the help of an external agency. In any case the first law is valid in both the forward and reverse direction of the process. You have also learnt about the concept of entropy which is a measure of the randomness or the disorder in a system. This concept helps in explaining the spontaneity of the irreversible processes. For an irreversible process, the entropy of the system and surroundings taken together i.e. of the universe increases, while for a process at equilibrium it remains constant. This conclusion is of great importance as it helps us to predict whether a given process can take place spontaneously or not. Since all processes in nature occur spontaneously i.e. irreversibly, it follows that the entropy of the universe is increasing continuously.

This important statement i.e. “in any spontaneous process, the entropy of the universe (system and surroundings) always increases” is also known as the second law of thermodynamics.

Specifically it means that

Since chemists are generally more interested in the system (reaction mixture) than the surroundings, it is therefore more convenient to restate the second law in terms of the thermodynamic properties of the system, without regard to the surroundings. As already described in the previous section, this is possible through the Gibbs free energy G which for a system is defined as G = H – TS. In terms of this thermodynamic property, the second law of thermodynamics can be restated as in any spontaneous process at

constant temperature and pressure, the free energy of the system (∆Gsystem) always decreases. According to this definition

The third law of thermodynamics is concerned with determination of entropy. It states that a substance which is perfectly crystalline at absolute zero of temperature has an entropy of zero. In a perfect crystal at absolute zero of temperature, each constituent of the crystal (atom, molecule or ion) is at the proper crystal lattice site and it therefore has the lowest energy. This means that this particular state is of perfect order, i.e, has zero disorder and hence zero entropy.

However there are certain substances which possess certain entropy even at absolute zero. This entropy is known as residual entropy. The origin of residual entropy can be explained on the basis of the disorder which remains at absolute zero in certain crystals composed of AB types of molecules where A and B are similar atoms (as in CO). In such substances, there is a very little energy difference between “…AB AB AB…” and “..…AB BA BA AB…..” and other arrangements so that the molecules adopt the orientations AB and BA at random in the solid. This gives rise to some disorder, also known as frozen disorder, and consequently residual entropy. For example in case of CO, the measured residual entropy is 5 J K-1 mol-1 which is close to the value expected for a random structure Figure 1 (B) of the form “ …… CO CO OC CO CO OC OC … ”.

pH of an acidic buffer

Taking the negative logarithm on both the sides, we get 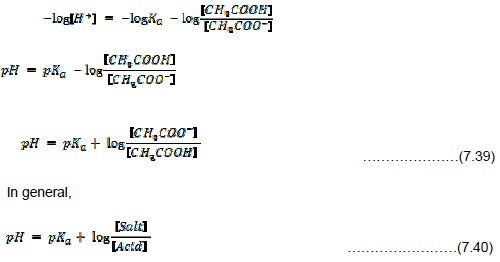 This equation (7.40) is called Henderson- Hasselbalch equation. According to this equation, the pH of an acidic buffer consisting of a mixture of a weak acid and its salt depends on the pKa of the acid, and the concentrations of the salt and acid in the mixture.

If concentration of the salt is equal to that of the acid, then pH = pka

The buffer action of an acidic buffer consisting of a mixture of acetic acid and sodium acetate can be explained in the following way. If we add small amount of HCl to the buffer solution it will ionise to give H+ ions. These combine with CH3COO– ions to form weakly ionized acetic acid.

Since H+ ions get neutralised by CH3COO– ions, there will be no change in pH. On the other hand, if we add a few drops of NaOH to the buffer solution, it provides OH– ions which are neutralized by the acetic acid present in the mixture.

Therefore the pH of the solution remains unchanged.

pH of a Basic Buffer 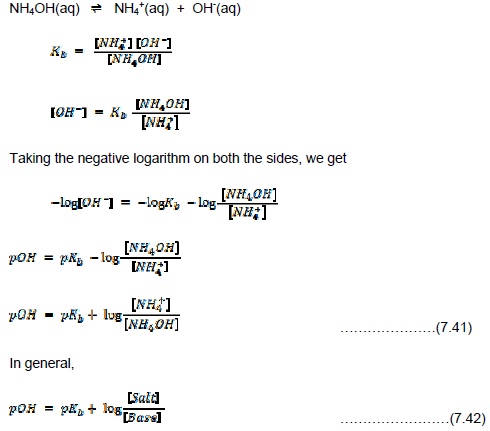 Further, pH can be calculated easily from pOH using 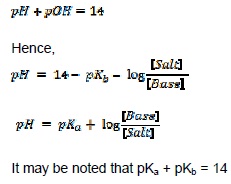 The buffer action of a basic buffer consisting of a mixture of ammonium hydroxide and ammonium chloride can be explained in the following way. If a few drops of HCl are added to the buffer solution, it will ionise to give H+ ion which will combine with OH– ions to form H2O.

Therefore, the addition of HCl will not change the pH. On the other hand, when a few drops of NaOH solution are added to the buffer solution, it would give OH– ions. These OH– ions combine with NH4+ ions present in the solution to form NH4OH, which is only slightly ionised.

Hence, the addition of a base also will not change the pH.

Antioxidants are one of the important and necessary food additives. These compounds retard the action of oxygen on food thus reducing its speed of decomposition by oxidation. Hence they help in the preservation of food. These act as sacrificial materials, i.e. these are more reactive towards oxygen than are the materials they are protecting. They also reduce the rate of involvement of free radicals in the aging process.

Examples: The two most familiar antioxidants used are butylated hydroxy toluene (BHT) and butylated hydroxy anisole (BHA) (Figure 1). These phenolic compounds are added to preserve fats in packaged food. Oxygen reacts preferentially with BHA or BHT rather than oxidizing fats or oils, thereby protecting them from spoilage. The addition of BHA to butter increases its storage life from months to years. Sometimes, BHT and BHA are added in combination with citric or ascorbic acids to produce a more active synergetic effect.

Sulphur dioxide and sulphites ( such as sodium sulphite, sodium bisulphite and sodium metabisulphite) are useful antioxidants for wine and beers, sugars syrups and cut, peeled or dried fruits and vegetables. They prevent or reduce their discoloration.

All CBSE Books and Supporting Material All CBSE Teachers Manual