Get here NCERT Solutions for Class 12 Chemistry Chapter 7. These NCERT Solutions for Class 12 of Chemistry subject includes detailed answers of all the questions in Chapter 7 – The p Block Elements provided in NCERT Book which is prescribed for class 12 in schools. Book: National Council of Educational Research and Training (NCERT) Class: 12th Class Subject: Chemistry Chapter: Chapter 7 – The p Block Elements

Class XII Chemistry Chapter 7 The p Block Elements NCERT Solution is given below.
Question 7.1: Discuss the general characteristics of Group 15 elements with reference to their electronic configuration, oxidation state, atomic size, ionisation enthalpy and electronegativity. Answer General trends in group 15 elements (i) Electronic configuration: All the elements in group 15 have 5 valence electrons. Their general electronic configuration is ns2 np3. (ii) Oxidation states: All these elements have 5 valence electrons and require three more electrons to complete their octets. However, gaining electrons is very difficult as the nucleus will have to attract three more electrons. This can take place only with nitrogen as it is the smallest in size and the distance between the nucleus and the valence shell is relatively small. The remaining elements of this group show a formal oxidation state of −3 in their covalent compounds. In addition to the −3 state, N and P also show −1 and −2 oxidation states. All the elements present in this group show +3 and +5 oxidation states. However, the stability of +5 oxidation state decreases down a group, whereas the stability of +3 oxidation state increases. This happens because of the inert pair effect. (iii) Ionization energy and electronegativity First ionization decreases on moving down a group. This is because of increasing atomic sizes. As we move down a group, electronegativity decreases, owing to an increase in size. (iv) Atomic size: On moving down a group, the atomic size increases. This increase in the atomic size is attributed to an increase in the number of shells. Question 7.2: Why does the reactivity of nitrogen differ from phosphorus? Answer Nitrogen is chemically less reactive. This is because of the high stability of its molecule, N2. In N2, the two nitrogen atoms form a triple bond. This triple bond has very high bond strength, which is very difficult to break. It is because of nitrogen’s small size that it is able to form pπ−pπ bonds with itself. This property is not exhibited by atoms such as phosphorus. Thus, phosphorus is more reactive than nitrogen. Question 7.3: Discuss the trends in chemical reactivity of group 15 elements. Answer General trends in chemical properties of group − 15 (i) Reactivity towards hydrogen: The elements of group 15 react with hydrogen to form hydrides of type EH3, where E = N, P, As, Sb, or Bi. The stability of hydrides decreases on moving down from NH3 to BiH3. (ii) Reactivity towards oxygen: The elements of group 15 form two types of oxides: E2O3 and E2O5, where E = N, P, As, Sb, or Bi. The oxide with the element in the higher oxidation state is more acidic than the other. However, the acidic character decreases on moving down a group. (iii) Reactivity towards halogens: The group 15 elements react with halogens to form two series of salts: EX3 and EX5. However, nitrogen does not form NX5 as it lacks the d-orbital. All trihalides (except NX3) are stable. (iv) Reactivity towards metals: The group 15 elements react with metals to form binary compounds in which metals exhibit −3 oxidation states. Question 7.4: Why does NH3 form hydrogen bond but PH3 does not? Answer Nitrogen is highly electronegative as compared to phosphorus. This causes a greater attraction of electrons towards nitrogen in NH3 than towards phosphorus in PH3. Hence, the extent of hydrogen bonding in PH3 is very less as compared to NH3. Question 7.5: How is nitrogen prepared in the laboratory? Write the chemical equations of the reactions involved. Answer An aqueous solution of ammonium chloride is treated with sodium nitrite.

NO and HNO3 are produced in small amounts. These are impurities that can be removed on passing nitrogen gas through aqueous sulphuric acid, containing potassium dichromate. Question 7.6: How is ammonia manufactured industrially? Answer Ammonia is prepared on a large-scale by the Haber’s process.

The optimum conditions for manufacturing ammonia are: (i) Pressure (around 200 × 105 Pa) (ii) Temperature (4700 K) (iii) Catalyst such as iron oxide with small amounts of Al2O3 and K2O 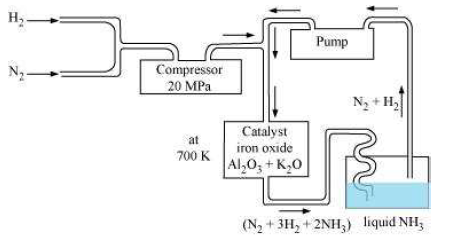 Question 7.7: Illustrate how copper metal can give different products on reaction with HNO3. Answer Concentrated nitric acid is a strong oxidizing agent. It is used for oxidizing most metals. The products of oxidation depend on the concentration of the acid, temperature, and also on the material undergoing oxidation.

Question 7.8: Give the resonating structures of NO2 and N2O5. Answer

Question 7.9: The HNH angle value is higher than HPH, HAsH and HSbH angles. Why? [Hint: Can be explained on the basis of sp3 hybridisation in NH3 and only s−p bonding between hydrogen and other elements of the group]. Answer Hydride NH3 PH3 AsH3 SbH3 H−M−H angle 107° 92° 91° 90° The above trend in the H−M−H bond angle can be explained on the basis of the electronegativity of the central atom. Since nitrogen is highly electronegative, there is high electron density around nitrogen. This causes greater repulsion between the electron pairs around nitrogen, resulting in maximum bond angle. We know that electronegativity decreases on moving down a group. Consequently, the repulsive interactions between the electron pairs decrease, thereby decreasing the H−M−H bond angle. Question 7.10:

Nitrogen has a small size due to which the lone pair of electrons is concentrated in a small region. This means that the charge density per unit volume is high. On moving down a group, the size of the central atom increases and the charge gets distributed over a large area decreasing the electron density. Hence, the electron donating capacity of group 15 element hydrides decreases on moving down the group. Question 7.12: Nitrogen exists as diatomic molecule and phosphorus as P4. Why? Answer Nitrogen owing to its small size has a tendency to form pπ−pπ multiple bonds with itself. Nitrogen thus forms a very stable diatomic molecule, N2. On moving down a group, the tendency to form pπ−pπ bonds decreases (because of the large size of heavier elements). Therefore, phosphorus (like other heavier metals) exists in the P4 state. Question 7.13: Write main differences between the properties of white phosphorus and red phosphorus. Answer 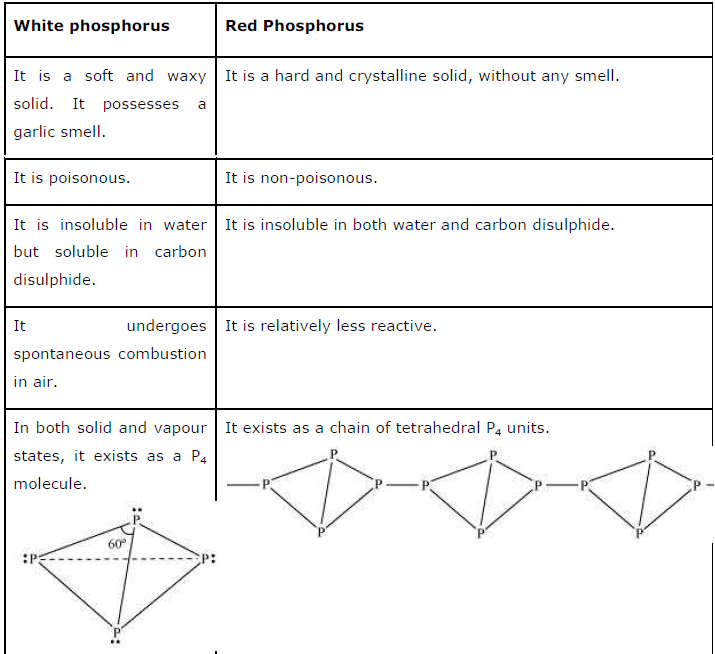 Question 7.14: Why does nitrogen show catenation properties less than phosphorus? Answer Catenation is much more common in phosphorous compounds than in nitrogen compounds. This is because of the relative weakness of the N−N single bond as compared to the P−P single bond. Since nitrogen atom is smaller, there is greater repulsion of electron density of two nitrogen atoms, thereby weakening the N−N single bond. Question 7.15: Give the disproportionation reaction of H3PO3. Answer

Question 7.24: Explain why fluorine forms only one oxoacid, HOF. Answer Fluorine forms only one oxoacid i.e., HOF because of its high electronegativity and small size. Question 7.25: Explain why inspite of nearly the same electronegativity, oxygen forms hydrogen bonding while chlorine does not. Answer Both chlorine and oxygen have almost the same electronegativity values, but chlorine rarely forms hydrogen bonding. This is because in comparison to chlorine, oxygen has a smaller size and as a result, a higher electron density per unit volume. Question 7.26: Write two uses of ClO2. Answer Uses of ClO2: (i) It is used for purifying water. (ii) It is used as a bleaching agent. Question 7.27: Why are halogens coloured? Answer Almost all halogens are coloured. This is because halogens absorb radiations in the visible region. This results in the excitation of valence electrons to a higher energy region. Since the amount of energy required for excitation differs for each halogen, each halogen displays a different colour. Question 7.28:

Question 7.39: Why do noble gases have comparatively large atomic sizes? Answer Noble gases do not form molecules. In case of noble gases, the atomic radii corresponds to van der Waal’s radii. On the other hand, the atomic radii of other elements correspond to their covalent radii. By definition, van der Waal’s radii are larger than covalent radii. It is for this reason that noble gases are very large in size as compared to other atoms belonging to the same period. Question 7.40: List the uses of Neon and argon gases. Answer Uses of neon gas: (i) It is mixed with helium to protect electrical equipments from high voltage. (ii) It is filled in discharge tubes with characteristic colours. (iii) It is used in beacon lights. Uses of Argon gas: (i) Argon along with nitrogen is used in gas-filled electric lamps. This is because Ar is more inert than N. (ii) It is usually used to provide an inert temperature in a high metallurgical process. (iii) It is also used in laboratories to handle air-sensitive substances. Question 7.1: Why are pentahalides more covalent than trihalides? Answer In pentahalides, the oxidation state is +5 and in trihalides, the oxidation state is +3. Since the metal ion with a high charge has more polarizing power, pentahalides are more covalent than trihalides. Question 7.2: Why is BiH3 the strongest reducing agent amongst all the hydrides of Group 15 elements? Answer As we move down a group, the atomic size increases and the stability of the hydrides of group 15 elements decreases. Since the stability of hydrides decreases on moving from NH3 to BiH3, the reducing character of the hydrides increases on moving from NH3 to BiH3. Question 7.3: Why is N2 less reactive at room temperature? Answer The two N atoms in N2 are bonded to each other by very strong triple covalent bonds. The bond dissociation energy of this bond is very high. As a result, N2 is less reactive at room temperature. Question 7.4: Mention the conditions required to maximise the yield of ammonia. Answer Ammonia is prepared using the Haber’s process. The yield of ammonia can be maximized under the following conditions: (i) High pressure (~ 200 atm) (ii) A temperature of ~700 K (iii) Use of a catalyst such as iron oxide mixed with small amounts of K2O and Al2O3

Question 7.26: Considering the parameters such as bond dissociation enthalpy, electron gain enthalpy and hydration enthalpy, compare the oxidising power of F2 and Cl2. Answer Fluorine is a much stronger oxidizing agent than chlorine. The oxidizing power depends on three factors. 1. Bond dissociation energy 2. Electron gain enthalpy 3. Hydration enthalpy The electron gain enthalpy of chlorine is more negative than that of fluorine. However, the bond dissociation energy of fluorine is much lesser than that of chlorine. Also, because of its small size, the hydration energy of fluorine is much higher than that of chlorine. Therefore, the latter two factors more than compensate for the less negative electron gain enthalpy of fluorine. Thus, fluorine is a much stronger oxidizing agent than chlorine. Question 7.27: Give two examples to show the anomalous behaviour of fluorine. Answer Anomalous behaviour of fluorine (i) It forms only one oxoacid as compared to other halogens that form a number of oxoacids. (ii) Ionisation enthalpy, electronegativity, and electrode potential of fluorine are much higher than expected. Question 7.28: Sea is the greatest source of some halogens. Comment. Answer Sea water contains chlorides, bromides, and iodides of Na, K, Mg, and Ca. However, it primarily contains NaCl. The deposits of dried up sea beds contain sodium chloride and carnallite, KCl.MgCl2.6H2O. Marine life also contains iodine in their systems. For example, sea weeds contain upto 0.5% iodine as sodium iodide. Thus, sea is the greatest source of halogens. 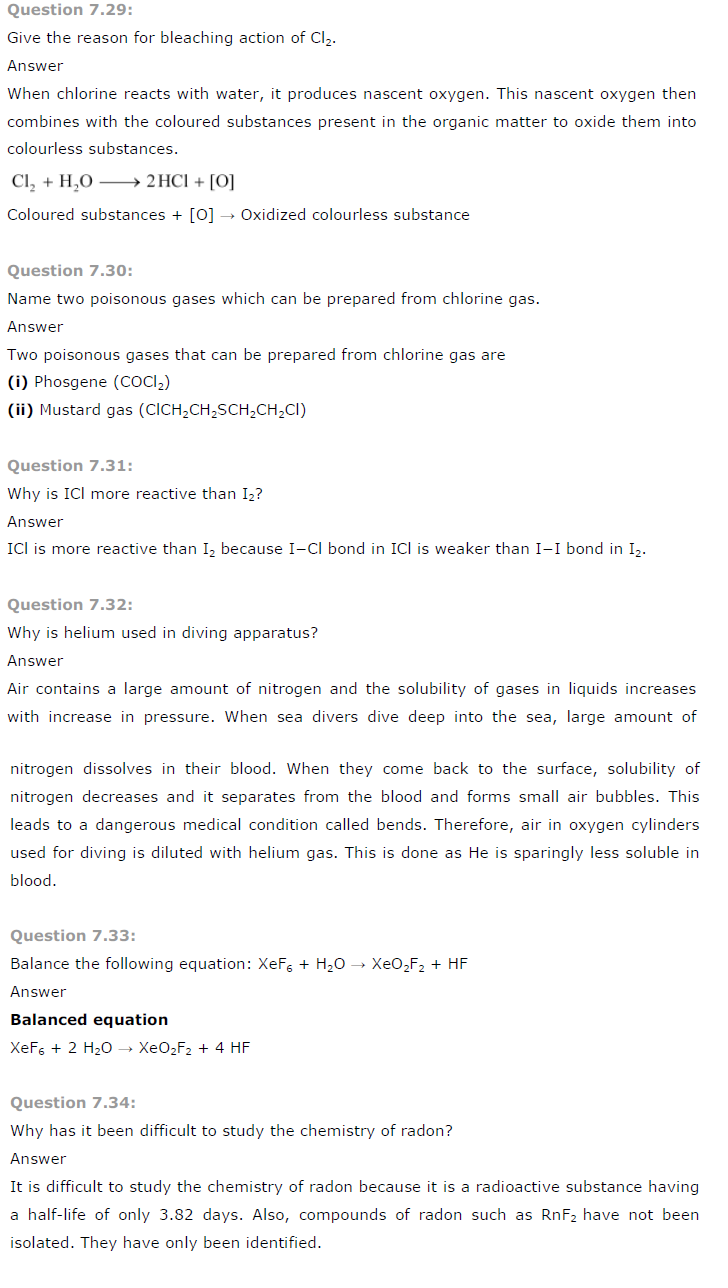