CBSE Solved Sample Papers for Class 7 for Science Subject  is given below. The solved sample papers are created as per the latest CBSE syllabus and curriculum keeping in mind the latest marking schemes.

Q 1. What do you understand y reproduction?

Ans:- The production of new individual from the parents in known as reproduction.

Q2. What is pollination?

Ans:- The transfer of pollen grains from anther to stigma of a flower is called pollination.

Q3. Which type of lens forms always a virtual image?

Q4.  Fig. shows the distance-time graph for the motion of two vehicles A and B. which one of them is moving faster? 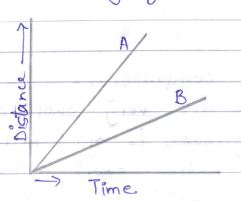 Distance-time graph for the motion of two cars

Ans:- Vehicle A is moving faster.

Q5.  Name the factors affecting the depletion of water table.

Ans:- Increase in human population, increasing industries and increasing agricultural activities are cause of depletion of water table.

Q6. How time was measured when pendulum clocks were not available?

Ans:- Many time measuring devices were used in different parts of the world before the pendulum clocks became popular, sundials, water clock and sand clocks are some examples of such devices.

Ans:- Groundwater  is recharged by the rainwater and water from other sources such as rivers and ponds. The water seeps through the soil and fills the empty spaces and cracks deep below the ground. The process of seeping the water into the ground is called infiltration.

Q 8. What is the difference between rate of percolation and the amount of water retained?

Q 9. Find out the letters of English alphabet or any other language known to you in which the image formed in a plane mirror appears exactly like the letter itself. Discuss your findings

Q 10. Classify the following as motion along a straight line, circular or oscillatory motion:

Q 11. Explain how soil pollution and soil erosion could be prevented?

Ans. Soil pollution and soil erosion could be prevented by preventing cutting of trees and deforestation. Green areas should be increased. Crop rotation should be followed.

Q 12. Without touching a mirror how can you know whether it is concave or convex?

Ans:- The image which cannot be taken on a screen is called virtual image. When some object is placed very close to the concave mirror we do not get any image of that object on the white screen placed behind the mirror. Such image is called a virtual image.

Q 14 You have asked to maintain a garden. How will you minimize the use of water?

Ans:- To minimize the use of water:

Ans:- Untreated human excreta is a health hazard. It causes air, water and soil pollution. Both the surface water and ground water get polluted; ground water is a source of water for wells, tubewells. Springs and many rivers.  Thus it becomes the route for water-borne diseases. They include cholera, typhoid, polio, meningitis, hepatitis and dysentery.

Ans:- Products we get from forests:

Q17. How does the process of fertilization take place in flowers?

Q18. What ate the problem arising due to open drain and other unsanitary conditions?

Ans:-Open drains and unsanitary conditions produce bad small. It becomes an idle place of breeding for mosquitoes, files and other harmful insects. These insects spread many harmful diseases and other health hazards

Q. 19 What are odometer and speedometer?

Q 20. What difference will if make if some trees are cut in a forest for a factory?

Q 21. What are decomposers? Name any two of them. What do they do in the forest?

Ans:- The micro-organisms which convert the dead plants and animals to humus are known as decomposers. Two decomposers are bacteria, beetles and flubs. They clean the forests of the decaying dead bodies and replenish the nutrient back to the forest soil.

Ans:- Fuse is a device used to prevent any change being caused to circuit and electric appliance .

Whenever there is shoring or appliances are used beyond the current estimation in domestic circuits than the fuse blows. This is because current flow is very large. This saves the appliances and the circuit from damage.

(2) Why is blood needed by all the parts of a body?

Ans:- (1) there are four components of the blood:

(a)     Plasma is the liquid part of the blood which is yellowish in color and contains 90 percent water. It contains food, enzymes, wastes and proteins etc.
(b)   Red blood cells (RBCs) are disc shaped cells containing red-colored pigments called hemoglobin in it. Hemoglobin helps in transportation of oxygen.
(c)    White blood cells (WBC’s) are the fighting cells, which protect us against bacteria and foreign material causing infections.
(d)   Platelets help in clothing of the blood.

Q 24. Explain the factors responsible for the depletion of water table?

Ans:- These are four main causes of depletion of water table.

(1)    Increasing population:- increasing population creates demand for construction of houses, shops, offices, roads and playgrounds. This in turn, decreases the seepage of rain water into the ground. Moreover a huge amount of water is required for construction work. Often groundwater is used for this purpose. So, on the hand we are consuming more groundwater, on the other we are allowing lesser water to seep into the ground this results in depletion of water table.
(2)    Increasing industries:- Water is used by all the industries. Almost everything that we use process. The number of industries is increasing continuously. Water used by most of the industries is drawn from the around.
(3)    Agricultural activities:- A majority of farmers in India depend upon rains for irrigating their crops. Irrigation system such canals are there only in a few places. Even these systems may  suffer from lack of water due to erratic rainfall. Therefore farmers have to use groundwater for irrigation. Population pressure on agriculture forces increasing use of groundwater day by day. This results in depletion of water table.
(4)    Lack of water conservation techniques:- Main source of water on earth and for the underground water is the rain. The water of the rain, if conserved can increase the water level. But this is not done due to the lack of rain water harvesting techniques and other water conservation techniques.

Q 25. Describe the steps in getting clarify water from waste water.

Ans:- Water is treated physically, chemically and biologically in waste water treatment plant. Following steps are involved in the purification of water:

(1)    At first stage all the physical impurities like stones, rags, napkins, plastic bags, cans, packets etc are removed. It is done by passing the water through bar screens.
(2)    Then water is taken to frit and sand removal tank where impurities are removed by sedimentation.
(3)    Solid impurities and faces etc are collected from the bottom of the water. These solid impurities collected are called sludge. Water is cleared of floatable solids like oil and grease.
(4)    Clarified water is cleared of other impurities by aerator. All disease causing bacteria released in various water bodies.

Q 28. Which parts of the flower forms fruit:

Q 29. This method does not result in conservation of water:

Q 30. The batteries used in tractors, trunks and inverter are also made from:

Q 32. This is level of groundwater:

Q 34. The suspended impurities in sewage are called:

Q 35. Organisms which cannot be seen with naked eyes are called:

Q 36. One of these is not a source of surface water:

Q 37. The positive terminal of one cell is connected to the:

Q 38. The cells helping in clotting of blood are:

Q 39. Following should not be disposed off the drains:

Q 40. Small trees and grass and shrubs from the