The compound, nitrogen pent oxide, is a volatile solid which decomposes in the gaseous state as well as in the form of its solution in an inert solvent like carbon tetrachloride, chloroform etc. according to the equation

When the reaction is carried out in the solution, N2O4 and NO2 remain in the solution and the volume of oxygen gas collected is noted at different intervals of time. It is obvious that

The decomposition of hydrogen peroxide in aqueous solution (catalyzed by the presence of finely divided platinum) takes place according to the equation :

It can also be done making use of the fact that H2O2 solution can be titrated against KMnO4 solution thus by withdrawing equal amounts of the solution (usually 5 cc) at regular intervals of time and titrating against the same KMnO4 solution, the amount of H2O2 present can be found every time. It is obvious that for the same volume of the reaction solution withdrawn, 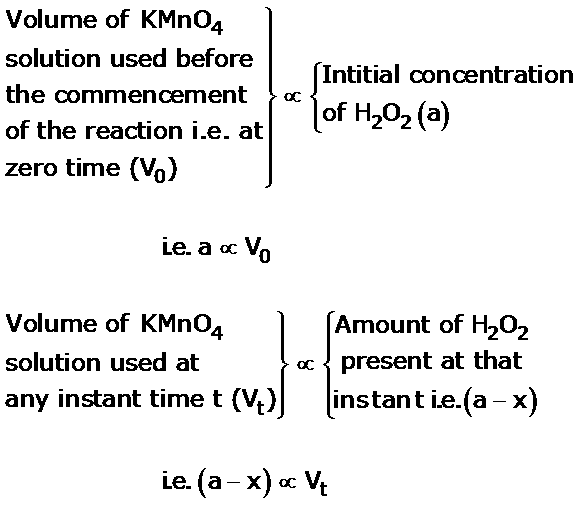 Substituting these values in the first order equation, we get

The decomposition of hydrogen peroxides as, tested by this equation, and is found to be of the first order.