and area denoted by Δ.

Trigonometrical Ratios of Half of the Angles

Consider a triangle of side a, b and c.

where, R and r are the radii of the circumcircle and the incircle of the ΔABC, respectively.

Elements of a Triangle

If three elements of a triangle are given, atleast one of which is its side; then other elements can be uniquely calculated. This is called solving the triangle.

1. Solutions of a Right Angled Triangle

Let ΔABC be a given triangle with right angle at C, then

(i) solution when two sides are given

2. Solutions of a Triangle in General

(i) Solution when three sides a, band c are given, then

(ii) Solution when two sides and the included angle are given, then 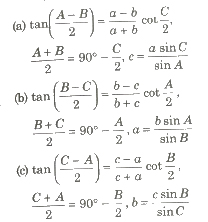 This is called as Napier’s analogy.

(iii) Solution when one side a and two angles A and B are given, then

(iv) Solution when two sides a, b and the opposite ∠A is given, then

(b) When A is an acute angle and a = b sin A In this case, only one triangle is possible, which is right angled at B.

(c) If A is an acute angle and a > b sin A In this case, there are two values of B given by

side c can be calculated from

The circle touches the three sides of the A triangle internally is called the inscribed or the incircle of the triangle. Its radius r is called inradius of the circle. 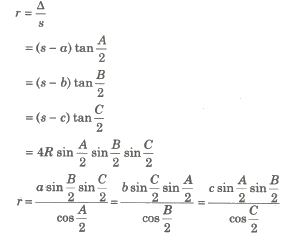 The circle touches BC and the two sides AB and AC produced of ΔABC externally is called the escribed circle opposite A. Its radius is denoted by rl.

similarly, r2 and r3 denote the radii of the escribed circles opposite angles Band C, respectively. Hence, rl, r2 and r3 are called the exradius of &DeltaABC. Here, 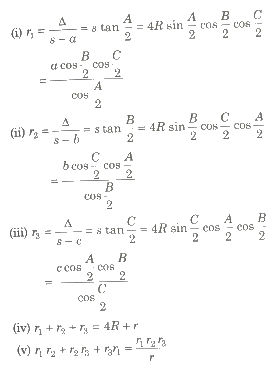 The point of intersection of perpendicular drawn from the vertices on the opposite sides of a triangle is called orthocentre.

The ΔDEF formed by joining the feet of the altitudes is called the pedal triangle.

(ii) The length of medians AD, BE and CF of a Δ ABC are

Radii of the Inscribed and Circumscribed Circles of Regular Polygon

Some Properties of Triangle

(i) The mid-point of the hypotenuse of a right angled triangle is equidistant from the three vertices of the triangle.

(ii) The mid-point of the hypotenuse of a right angled triangle is the circumcentre of the triangle.

(iii) If any triangle, the exterior angle is equal to the sum of interior opposite angles.

(v) In any Δ ABC, if AD is the angle bisector of ∠ BAC, then

(vi) Appollonius Theorem If AD is median of the &dELTA; ABC, then

(viii) In an isosceles triangle, the median is perpendicular to the base.

If O be the observer’s eye and OX be the p horizontal line through O. If the object P is at higher level than eye, then ∠POX is called the angle of elevation.

If the object P is a lower level than O, then ∠POX is called the angle of depression.

Important Results on Height and Distance 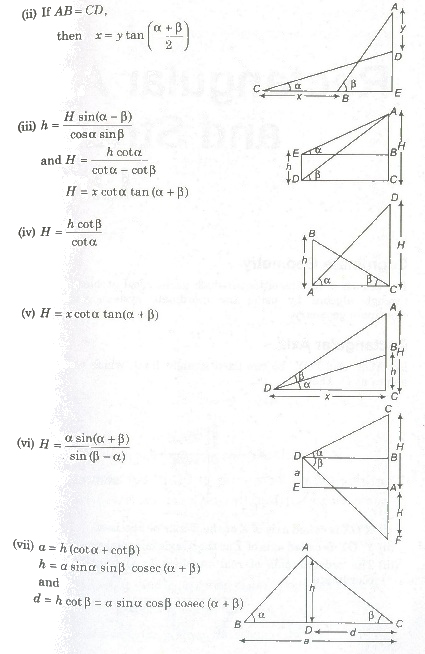