If any object is thrown with velocity u, making an angle θ, from horizontal, then

Time of flight It is defined as the total time for which the projectile remains in air.

Maximum height It is defined as the maximum vertical distance covered by projectile.

Horizontal range It is defined as the maximum distance covered in horizontal distance.

Projectile Projected from Some Heights

1. When Projectile is Projected Horizontally

If velocity makes an angle φ, from horizontal, then

Equation of the path of the projectile

2. When Projectile Projected Downward at an Angle with Horizontal

Time of flight can be obtained from the equation,

3. When Projectile Projected Upward at an Angle with Horizontal

Time of flight can be obtained from the equation

Horizontal range x = (u cos θ)t

Velocity of projectile after t seconcil

4. Projectile Motion on an Inclined Plane

Initial velocity along the inclined plane = u cos (α – β) 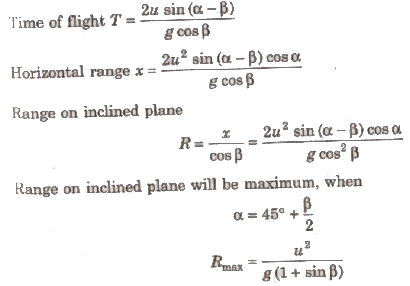 Circular motion is the movement of an object in a circular path.

Note A special kind of circular motion is when an object rotates around itself. This can be called spinning motion.

(i) Angular Displacement Angular displacement is the angle subtended by the position vector at the centre of the circular path.

where Δs is the linear displacement and r is the radius. Its unit is radian.

Angular velocity is a vector quantity and its unit is rad/s.

Its unit is rad/s2 and dimensional formula is [T-2].

In circular motion, an acceleration acts on the body, whose direction is always towards the centre of the path. This acceleration is called centripetal acceleration.

Its unit is in m/s2 and it is a vector quantity.

It is that force which complex a body to move in a circular path.

It is directed along radius of the circle towards its centre.

Examples of some incidents and the cause of centripetal force involved.

It appears when centripetal force ceases to exist.

Centrifugal force does not act on the body in an inertial frame but arises as pseudo forces in non-inertial frames and need to be considered.

If centripetal force is obtained only by the force of friction between the tyres of the vehicle and road, then for a safe turn, the coefficient of friction (µs) between the road and tyres should be,

where, v = the velocity of the vehicle and r = radius of the circular path.

If centripetal force is obtained only by the banking of roads, then the speed (a) of the vehicle for a safe turn

In normal life, the centripetal force is obtained by the friction force between the road and tyres as well as by the banking of the roads.

Therefore, the maximum permissible speed for the vehicle is much greater than the optimum value of the speed on a banked road. When centripetal force is obtained from friction force as well as banking of roads, then maximum safe value of speed of vehicle

When a cyclist takes turn at road, he inclined himself from the vertical, slower down his speed and move on a circular path of larger radius.

where, v = speed of the cyclist, r = radius of path and g = acceleration due to gravity.

Motion in a Vertical Circle

(i) Minimum value of velocity at the highest point is √gr

(iii) Velocity of the body when string is in horizontal position

(iv) Tension in the string

(vi) When a vehicle is moving over a concave bridge, then at the lowest point, reaction (N2) is

(vii) When a car takes a turn, sometimes it overturns. During the overturning, it is the inner wheel which leaves the ground first.

(viii) A driver sees a child in front of him during driving a car, then it, better to apply brake suddenly rather than taking a sharp turn to avoid an accident.

In non-uniform horizontal circular motion, the magnitude of the velocity of the body changes with time.

where, α is angular acceleration, r = radius and a = velocity.

It consists of a string OA whose upper end 0 is fixed and bob is tied at the other free end. The string traces the surface of the cone, the arrangement is called a conical pendulum. 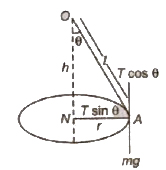