When a force acts on an object and the object actually moves in the direction of force, then the work is said to be done by the force.

Work done by the force is equal to the product of the force and the displacement of the object in the direction of force.

If under a constant force F the object displaced through a distance s, then work done by the force

where a is the smaller angle between F and s.

Work is a scalar quantity, Its S1 unit is joule and CGS unit is erg.

Its dimensional formula is [ML2T-2].

Work done by a force is zero, if

(b) body is displaced perpendicular to the direction of force, i.e.,

Work done by a force is positive if angle between F and s is acute angle.

Work done by a force is negative if angle between F and s is obtuse angle.

(i) Work done by a variable force is given by

It is equal to the area under the force-displacement graph along with proper sign.

(ii) Work done in displacing any body under the action of a number of forces is equal to the work done by the resultant force.

(iv) If work done by a force during a rough trip of a system is zero, then the force is conservative, otherwise it is called non-conservative force.

where g is acceleration due to gravity and h is height through particle one displaced.

where k is spring constant and x is displacement from mean position.

where i is the torque of the couple.

The time rate of work done by a body is called its power.

If under a constant force F a body is displaced through a distance s in time t, the power

But s / t = v ; uniform velocity with which body is displaced.

where θ is the smaller angle between F and v.

power is a scalar quantity. Its S1 unit is watt and its dimensional formula is [ML2T-3].

Its other units are kilowatt and horse power,

Energy of a body is its capacity of doing work.

Its S1 unit is joule and CGS unit is erg. Its dimensional formula is [ML3T-3].

The sum of kinetic and potential energies at any point remains constant throughout the motion. It does not depend upon time. This is known as law of conservation of mechanical energy.

Mechanical energy is of two types:

The energy possessed by any object by virtue of its motion is called its kinetic energy.

Kinetic energy of an object is given by

The energy possessed by any object by virtue of its position or configuration is called its potential energy.

There are three important types of potential energies:

(i) Gravitational Potential Energy If a body of mass m is raised through a height h against gravity, then its gravitational potential energy = mgh,

(ii) Elastic Potential Energy If a spring of spring constant k is stretched through a distance x. then elastic potential energy of the spring = 1 . 2 kx2

The variation of potential energy with distance is shown in figure.

(iii) Electric Potential Energy The electric potential energy of two point charges ql and q’l. separated by a distance r in vacuum is given by

Work done by a force in displacing a body is equal to change in its kinetic energy.

Regarding the work-energy theorem it is worth noting that

(i) If Wnet is positive, then Kf – Ki = positive, i.e., Kf > Ki or kinetic energy will increase and vice-versa.

Work done by all the forces (including the Pseudo force) = change in kinetic energy in non-inertial frame.

According to Einstein, the mass can be transformed into energy and vice – versa.

where c is the speed of light in vacuum.

Principle of Conservation of Energy

The sum of all kinds of energies in an isolated system remains constant at all times.

Principle of Conservation of Mechanical Energy

For conservative forces the sum of kinetic and potential energies of any object remains constant throughout the motion.

According to the quantum physics, mass and energy are not conserved separately but are conserved as a single entity called ‘mass-energy’.

Collision between two or more particles is the interaction for a short interval of time in which they apply relatively strong forces on each other.

In a collision physical contact of two bodies is not necessary. rrhere are two types of collisions:

The collision in which both the momentum and the kinetic energy of the system remains conserved are called elastic collisions.

In an elastic collision all the involved forces are conservative forces.

The collision in which only the momentum remains conserved but kinetic energy does not remain conserved are called inelastic collisions.

In an inelastic collision some or all the involved forces are non-conservative forces.

Coefficient of Restitution or Resilience

The ratio of relative velocity of separation after collision to the velocity of approach before collision is called coefficient of restitution resilience.

It is represented by e and it depends upon the material of the collidingI bodies.

For a perfectly elastic collision, e = 1

For a perfectly inelastic collision, e = 0

One Dimensional or Head-on Collision

If the initial and final velocities of colliding bodies lie along the same line, then the collision is called one dimensional or head-on collision.

Applying Newton’s experimental law, we have

When masses of two colliding bodies are equal, then after the collision, the bodies exchange their velocities.

If second body of same mass (m1 = m2) is at rest, then after collision first body comes to rest and second body starts moving with the
initial velocity of first body.

It means light body will rebound with its own velocity and heavy body will continue to be at rest.

In Inelastic One Dimensional Collision

In Perfectly Inelastic One Dimensional Collision

Velocity of separation after collision = 0. 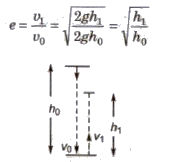 If after n collisions with the ground, the body rebounds with a velocity vn and rises to a height hn then

If the initial and final velocities of colliding bodies do not lie along the same line, then the collision is called two dimensional or oblique Collision.

From conservation law of momentum