Every object in the universe attracts every other object with a force which is called the force of gravitation.

Gravitation is one of the four classes of interactions found in nature.

(i) the gravitational force

Gravitational force is a attractive force between two masses m1 and m2 separated by a distance r.

where G is universal gravitational constant.

The value of G is independent of the nature and size of the bodies well as the nature of the medium between them.

(i) Gravitational force is a central as well as conservative force.

(ii) It is the weakest force in nature.

(iv) The law of gravitational is applicable for all bodies, irrespective of their size, shape and position.

(vi) Gravitational pull of the earth is called gravity.

(vii) Newton’s third law of motion holds good for the force of gravitation. It means the gravitation forces between two bodies are action-reaction pairs.

Following three points are important regarding the gravitational force

(i) Unlike the electrostatic force, it is independent of the medium between the particles.

(ii) It is conservative in nature.

(iii) It expresses the force between two point masses (of negligible volume). However, for external points of spherical bodies the whole mass can be assumed to be concentrated at its centre of mass.

Note Newton’s law of gravitation holde goods for object lying at uery large distances and also at very short distances. It fails when the distance between the objects is less than 10-9 m i.e., of the order of intermolecular distances.

Acceleration Due to Gravity

The uniform acceleration produced in a freely falling object due to the gravitational pull of the earth is known as acceleration due to gravity.

It is denoted by g and its unit is m/s2. It is a vector quantity and its direction is towards the centre of the earth.

The value of g is independent of the mass of the object which is falling freely under gravity.

The value of acceleration due to gravity on the moon is about. one sixth of that On the earth and on the sun is about 27 times of that on the earth.

Among the planets, the acceleration due to gravity is minimum on the mercury.

Relation between g and a is given by

Factors Affecting Acceleration Due to Gravity

(i) Shape of Earth Acceleration due to gravity g &infi; 1 / R2 Earth is elliptical in shape. Its diameter at poles is approximately 42 km less than its diameter at equator.

Therefore, g is minimum at equator and maximum at poles.

Therefore, there is no effect of rotation of earth about its own axis at poles. 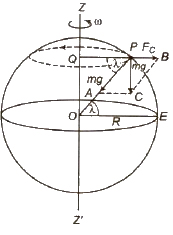 The value of g is minimum at equator

If earth stapes its rotation about its own axis, then g will remain unchanged at poles but increases by Rω2 at equator.

The value of g becomes zero at earth’s centre.

The space in the surrounding of any body in which its gravitational pull can be experienced by other bodies is called gravitational field.

It is a vector quantity and its direction is towards the centre of gravity of the body.

Its S1 unit is N/m and its dimensional formula is [LT-2].

Gravitational mass Mg is defined by Newton’s law of gravitation.

Gravitational potential at any point in gravitational field is equal the work done per unit mass in bringing a very light body from infinity to that point.

It is denoted by Vg.

Its SI unit is J / kg and it is a scalar quantity. Its dimensional formula is [L3r-2].

Since work W is obtained, that is, it is negative, the gravitational potential is always negative.

Gravitational potential energy of any object at any point in gravitational field is equal to the work done in bringing it from infinity to that point. It is denoted by U.

The negative sign shows that the gravitational potential energy decreases with increase in distance.

Gravitational potential energy at height h from surface of earth

Near the earth surface, time period of the satellite

where p is the average density of earth.

Artificial satellites are of two types :

A satellite which appears to be at a fixed position at a definite height to an observer on earth is called geostationary or parking satellite.

There satellites revolve around the earth in equatorial orbits.

These satellites are used in communication purpose.

INSAT 2B and INSAT 2C are geostationary satellites of India.

These are those satellites which revolve in polar orbits around earth. A polar orbit is that orbit whose angle of inclination with equatorial plane of earth is 90°.

There satellites revolve around the earth in polar orbits.

These satellites are used in forecasting weather, studying the upper region of the atmosphere, in mapping, etc.

Orbital velocity of a satellite is the minimum velocity required to the satellite into a given orbit around earth.

Orbital velocity of a satellite is given by

if v is the speed of a satellite in its orbit and vo is the required orbital velocity to move in the orbit, then

(i) If v < vo, then satellite will move on a parabolic path and satellite falls back to earth.

(ii) If V = vo then satellite revolves in circular path/orbit around earth.

(iii) If vo < V < ve then satellite shall revolve around earth in elliptical orbit.

Energy of a Satellite in Orbit

Total energy of a satellite

The energy required to remove a satellite from its orbit around the earth (planet) to infinity is called binding energy of the satellite.

Binding energy of the satellite of mass m is given by

Escape velocity on earth is the minimum velocity with which a body has to be projected vertically upwards from the earth’s surface so that it just crosses the earth’s gravitational field and never returns.

Escape velocity of any object

Escape velocity does not depend upon the mass or shape or size of the body as well as the direction of projection of the body.

Relation between escape velocity and orbital velocity of the satellite

If velocity of projection U is equal the escape velocity (v = ve), then the satellite will escape away following a parabolic path.

If velocity of projection u of satellite is greater than the escape velocity ( v > ve), then the satellite will escape away following a hyperbolic path.

It is a situation in which the effective weight of the body becomes zero,

(i) during freely falling under gravity

(ii) inside a space craft or satellite

(iii) at the centre of the earth

(iv) when a body is lying in a freely falling lift.

(i) Law of orbit Every planet revolve around the sun in elliptical orbit and sun is at its one focus.

(ii) Law of area The radius vector drawn from the sun to a planet sweeps out equal areas in equal intervals of time, i.e., the areal velocity of the planet around the sun is constant.

Areal velocity of a planet

where L = angular momentum and m = mass of the planet.

(iii) Law of period The square of the time period of revolution of planet around the sun is directly proportional to the cube semi-major axis of its elliptical orbit.

where, a = semi-major axis of the elliptical orbit.

(i) A missile is launched with a velocity less than the escape velocity. The sum of its kinetic energy and potential energy is negative.

(iii) A bomb explodes on the moon. You cannot hear the sound of the explosion on earth.

(iv) A bottle filled with water at 30°C and fitted with a cork is taken to the moon. If the cork is opened at the surface of the moon then water will boil.

(v) For a satellite orbiting near earth’s surface

(b) Gravitational mass = weight of body / acceleration due to gravity

(c) They are equal to each other in magnitude.