These are of the following two types:

1.  Azeotropic mixtures with  minimum boiling point:  The mixture of two liquids whose boiling Point is less than either of the two pure components.

Such mixtures on distillation will give first fraction upto point M in pure state. After this the temperature will rise and the second component will pass over. Hence in such solutions also complete separation is not possible. 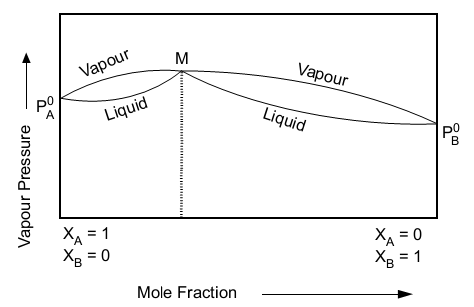 2.  Azeotropic mixtures with maximum boiling point:  The mixtures of two liquids whose boiling point is more than either of the two pure components.

This is formed by that composition of a non­ideal solution showing negative deviation for which the vapour pressure is minimum. E.g., HNO3 (68%) + water (32%) mixture boils at 393.5 K.

In a mixture of two volatile liquids A and B, if A is more volatile and present in excess, then during distillation the vapours will be rich of component A and the liquid part will be richer in component B. Finally we reach the point N where vapour pressure is minimum and the boiling point is maximum as shown in the figure.

At this stage the mixture distils unchanged in composition i.e., complete separation of components from this type of solution into pure state is impossible. 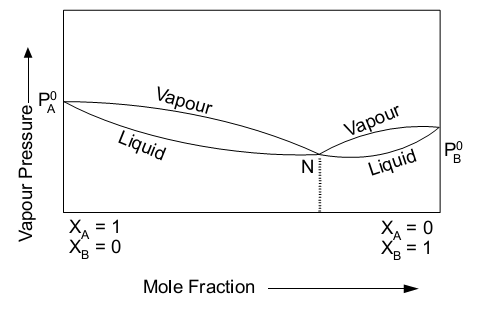 For this type of containing liquids A and B, vapour pressure composition curve is a straight line. On distillation, A being more volatile, will collect as distillate.

The remaining fraction will be poorer in A and richer in B. By repeating the process of distillation again and again, we can get both the components in pure state, e.g., methanol water mixture. 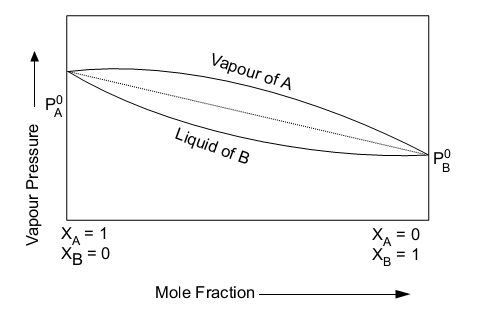