Surface tension is the property of any liquid by virtue of which tries to minimize its free surface area.

Surface tension of a liquid is measured as the force acting per length on an imaginary line drawn tangentially on the free surface the liquid.

It is a scalar quantity. Surface tension is a molecular phenomenon which is due to cohesive force and root cause of the force is electrical in nature.

Surface tension of a liquid depends only on the nature of liquid and independent of the surface area of film or length of the line .

Small liquid drops are spherical due to the property of surface tension.

These forces varies inversely as the seventh power of distance between the molecules.

The maximum distance upto which a molecule can exert a force of attraction on other molecules is called molecular range.

Molecular range is different for different substances. In solids and liquids it is of the order of 10-9 m.

If the distance between the molecules is greater than 10-9 m, the force of attraction between them is negligible.

If we increase the free surface area of a liquid then work has to be done against the force of surface tension. This work done is stored in liquid stu-face as potential energy,

(iii) Work Done in Splitting a Bigger Drop into n Smaller Droplets
If a liquid drop of radius R is split up into n smaller droplets, all of same size. then radius of each droplet

(iv) Coalescance of Drops If n small liquid drops of radius reach combine together so as to form a single bigger drop of radius R=n1/3.r, then in the process energy is released. Release of energy is given by

The angle subtended between the tangents drawn at liquid surface at solid surface inside the liquid at the point of contact, is called of contact (9). 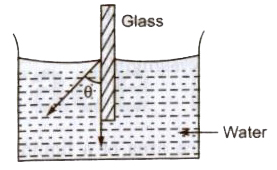 Angle of contact depends upon the nature of the liquid and solid contact and the medium which exists above the free surface of liquid.

When wax is coated on a glass capillary tube, it becomes water-proof.
The angle of contact increases and becomes obtuse. Water does not in it. Rather it falls in the tube by virtue of obtuse angle of contact.

If θ is acute angle, i.e; θ <90°, then liquid meniscus will be concave upwards.

If capillary is very narrow, then

where, r = radius of capillary tube, p = density of the liquid, and
θ = angle of contact and S = surface tension of liquid.

Some Practical Examples of Capillarity

If a capillary tube of insufficient length is placed vertically in a then liquid never come out from the tube its own, as

where, R = radius of curvature of liquid meniscus and
h = height of liquid column.

When a tube is kept in inclined position in a liquid the vertical height remains unchanged then length of liquid column. 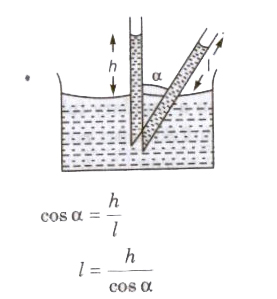 T = surface tension of liquid and 9 = acceleration due to gravity.

Excess Pressure due to Surface Tension

where, S = surface tension and R = radius of drop/bubble.

(v) When n small drops are combined into a bigger drop, then work done is given by

(vii) When two soap bubbles of radii ‘1 and ‘2 are in contact with each other, then radius (r) of common interface. 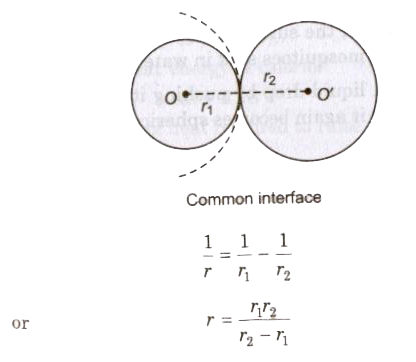 When charge is given to a soap bubble, its size increases surface tension of the liquid decreases due to electrification.

In weightlessness condition liquid does not rise in a capillary tube.

Some Phenomena Based on Surface Tension