There are three methods of heat transmission

(i) Conduction In solids, heat is transmitted from temperature to lower temperature without actual movements the particles. This mode of transmission of heat. is conduction.

(ii) Convection The process of heat-transmission in which particles of the fluid (liquid or gas) move. is called convection. Land breeze and see-breeze are formed due to convection.

(iii) Radiation The process of heat transmission in the form electromagnetic waves, is called radiation.

Radiation do not require any medium for propagation.

It propagates without heating the intervening medium.

The heat energy transferred by radiation, is called energy.

Heat from the sun reaches the earth by radiation.

In solids, heat is transferred through conduction. We will conduction of heat through a solid bar.

Conduction of Heat in a Conducting Rod

The state of a conducting rod in which no part of the rod absorbs nea is caned the steady state.

A surface of a material whose all points are at the same temperature, is called an isothermal surface.

The rate of change of temperature with distance between two isothermal surfaces is called temperature gradient.

The amount of heat flow in a conducting rod

where K = coefficient of thermal conductivity.
A = area of cross-section,
l = length of rod,
Δθ = temperature difference between the ends of the rod and
t = time.

The value of K is large for good conductors and very small for insulators.

Thermal resistance is given by

where, Δθ is temperature difference at the ends of the rod and H rate of flow of heat.

When Conducting Rods are Connected in Series

The amount of heat flow 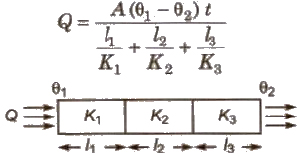 When Two Conducting Rods are Connected in Series 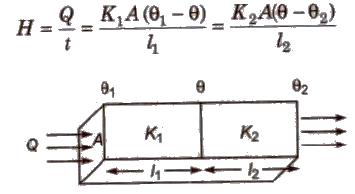 When Conducting Rods are Connected in Parallel 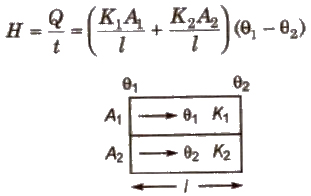 The thermal conductivities of different materials are proportional to the square of the lengths of the melted wax on the rods of these materials in the steady state.

If l1, l2, l3,…. are the lengths of the melted wax on the rods of different materials having coefficient of thermal conductivities K1, K2, K3,…, then

Formation of Ice on Lakes

Time taken to form x thickness of ice on lake

where ρ density of ice, L = latent heat of freezing of ice.

K = coefficient of thermal conductivity of ice and

It is denoted by r.

It is denoted by a.

It is denoted by t.

If body does not transmit any heat radiations, then t = 0

(i) r, a and t all are the pure ratio, so they have no unit dimension.

Emissive power of a body at a particular temperature is the total amount of thermal energy emitted per unit time per unit area of thel body for all possible wavelengths.

It is denoted by eλ

Its dimensional formula is [MT-3].

A body which absorbs completely the radiations of all wavelengths incident on it, is called a perfectly black body.

An ideal black body need not be black in colour.

The radiation from a black body depend upon its temperature only.

These heat radiations do not depend on density mass, size or the nature of the body.

Lamp black is 96% black and platinum black is about 98% black.

A perfectly black body cannot be realised in practice. The nearest example of an ideal black body is the Ferry’s black body.

These are typical spectral absorption lines. These are dark but not perfectly black due to their lower intensity as compared to the remaining part of spectrum.

These lines are produced when a cold gas is in between a broad spectrum photon source and detector.

A set of several hundred dark lines appearing against the bright back ground of the continuous solar spectrum and produced by absorption of light by the cooler gases in the sun’s outer atmosphere at frequencies corresponding to the atomic transition frequencies of these gases.

About 20000 such dark lines have been detected so far. These dark lines belong to hydrogen, helium, sodium, iron, calcium etc.

Variation of Colour with Temperature

(ii) At temperature 900o e, the colour of object is cherry red.

(iii) At temperature 1100o e, the colour of object is orange red.

(iv) At temperature l200o e, the colour of object is yellow.

(v) At temperature l600o e, the colour of object is white.

If To is the temperature of the surroundings, then

If e is the emissivity of the body, then

The rate of loss of heat of a liquid is directly proportional to difference in temperature of the liquid and its surroundings, i.e.

where T and To are the temperatures of the liquid and surroundings.

For black body radiation the rate of energy radiation per unit area per unit wavelength range at constant kelvin temperature can be against wavelength.

where λm = wavelength corresponding to which maximum energy is radiated,

The amount of heat received from the sun by one square centimetre area of a surface placed normally to the sun rays at mean distance the earth from the sun is known as solar constant. It is denoted by S.

Here, r is the radius of sun and R is the mean distance of earth from the centre of sun. Value of solar constant is 1.937 cal cm-2 min-1.