A wave is a vibratory disturbance in a medium which carries energy from one point to another point without any actual movement of the medium. There are three types of waves

(i) Transverse waves A wave in which the particles of the medium vibrate at right angles to the direction of propagation of wave, is called a transverse wave.

These waves travel in the form of crests and troughs.

These waves travel in the form of compressions and rarefactions.

Sound waves of all the mechanical waves that occur in nature, the most important in our everyday lives are longitudinal waves in a medium, usually air, called sound waves.

Sound waves are of three types

(i) Infrasonic Waves The sound waves of frequency lies between 0 to 20 Hz are called infrasonic waves.

Sound waves are mechanical longitudinal waves and require medium for their propagation. Sound waves can travel through

If Vs, Vi and Vg are speed of sound waves in solid, liquid and gases, then

Sound waves (longitudinal waves) can reflect, refract, interfere and diffract but cannot be polarised as only transverse waves can polarised.]

Velocity of longitudinal (sound) wave in any medium is given by

where, ET is the isothermal coefficient of volume elasticity and it is equal to the pressure of the gas.

where, ES, is the adiabatic coefficient of volume elasticity and it is equal to γ p.

(i) Effect of Pressure The formula for velocity of sound in a gas.

Hence, there is no effect of pressure on velocity of longitudinal wave.

(ii) Effect of Temperature Velocity of longitudinal wave in a gas

Velocity of sound in a gas is directly proportional to the square root of its absolute temperature.

If v0 and vt are velocities of sound in air at O°C and t°C, then

(iii) Effect of Density The velocity of sound in gaseous medium

The velocity of sound in a gas is inversely proportional to the square root of density of the gas.

(iv) Effect of Humidity The velocity of sound increases with increase in humidity in air.

If speed of a body in air is greater than the speed of sound, then it .s called supersonic speed. Such a body leaves behind it a conical “egion of disturbance which spreads continuously. Such a disturbance is Called a shock wave.

where, T = tension in the string and m = mass per unit length of the string.

where, η is modulus of rigidity and ρ is density of solid. 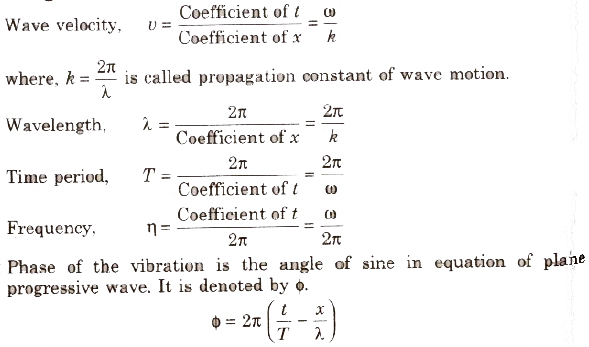 The minimum distance from a sound reflecting surface to hear an echo is 16.5 m.

Two or more progressive waves can travel simultaneously in the medium without effecting the motion of one another. Therefore, resultant displacement of each particle of the medium at any instant is equal to vector sum of the displacements produced by two waves separately. This principle is called principle of superposition.

When two waves of same frequency travel in a medium simultaneously in the same direction, then due to their superposition, the resultant intensity at any point of the medium is different from the sum intensities of the two waves. At some points the intensity of the resultant wave is very large while at some other points it is very small Or zero. This phenomenon is called interference of waves.

Minimum amplitude = (a ~ b) = Difference of component amplitudes.

A vibrating tuning fork, when rotated near ear, produced loud sound and silence due to constructive and destructive interference.

When two sound waves of nearly equal frequencies are produced simultaneously, then intensity of the resultant sound produced by their superposition increases and decreases alternately with time. This rise and fall intensity of sound is called beats.

The number of maxima or minima heard in one second is called beats frequency.

[The difference of frequencies should not be more than 10. Sound persists on human ear drums for 0.1 second. Hence, beats will not be heard if the frequency difference exceeds 10]

For loudness, time intervals are

When two similar waves propagate in a bounded medium in opposite directions, then due to their superposition a new type of wave is obtained, which appears stationary in the medium. This wave is called stationary or standing waves.

Equation of a stationary wave

Nodes and antinodes are obtained alternatively in a stationary waves.

Vibrations in a Stretched String

Velocity of a transverse wave in a stretched string. 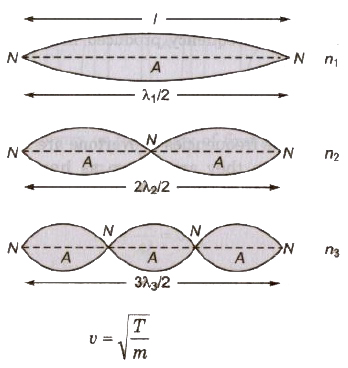 Where,T is tension in the string and m is mass per unit length of the string.

It is the sound of lowest frequency produced in fundamental note., vibration of a system.

Overtones Tones having frequencies greater than the runoamen note are called overtones. 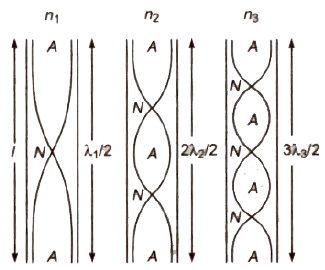 Therefore,even and odd harmonics are produced by an open organ pipe. 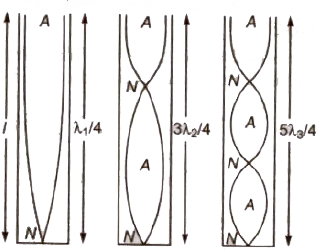 Therefore only even harmonics are produced by a closed organ pipe.

Antinode is not obtained at exact open end but slightly above it. The distance between open and antinode is called end correction.

It is denoted by e.

Resonance tube is a closed organ pipe in which length of air coluDf can be changed by changing height of liquid column in it.

In longitudinal mode, vibrations of the prongs of tuning fork are the length of the string.

In transverse mode, vibrations of tuning fork are at 90° to the length of string.

In both modes of vibrations, Melde’s law

(i) Intensity or Loudness Intensity of sound is energy transmitted per second per unit area by sound waves. Its SI unit is watt/metre2. Intensity is measured in decibel (dB).

A shrill and sharp sound has higher pitch and a grave and dull sound has lower pitch.

(iii) Quality or Timbre Quality is the characteristic of sound that differentiates between two sounds of same intensity and same frequency .

Quality depends on harmonics and their relative order and intensity.

The phenomena of apparent change in frequency of source due to a relative motion between the source and observer is called Doppler’s effect.

(i) When Source is Moving and Observer is at Rest When source is moving with ‘velocity towards an observer at rest, then apparent frequency

(ii) When Source is at Rest and Observer is Moving When observer is moving with velocity VO’ towards a source at rest, then apparent frequency.

(iii) When Source and Observer Both are Moving

(a) When both are moving in same direction along the direction of propagation of sound, then 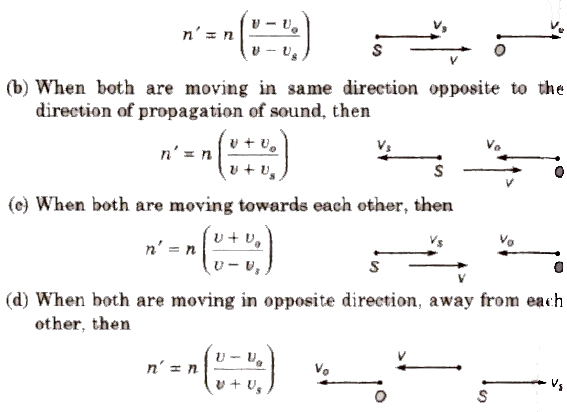 (i) The Doppler’s effect in sound does not take place in the transverse direction.

(ii) As shown in figure, the position of a source is S and of observer is O. The component of velocity of source towards the observer is V cos θ. For this situation, the approach frequency is 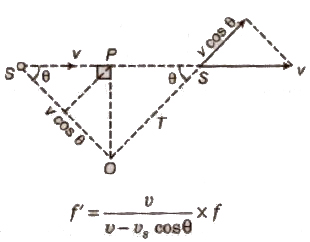 f ‘ which will now be a function of θ so, it will no more constant.

Similarly, if the source is moving away from the observer as shown above, with velocity component Vs cos θ then,

Thus, at point P, Doppler’s effect does not occur.

If wind is also blowing with a velocity w in the direction of sound, then its velocity is added to the velocity of sound. Hence, in this condition the apparent frequency is givenby

The measurement of Doppler shift has been used