Class XII Biology Chapter 6 Molecular Basis of Inheritance NCERT Solution is given below.

Question 2: If a double stranded DNA has 20 per cent of cytosine, calculate the per cent of adenine in the DNA.
Answer According to Chargaff’s rule, the DNA molecule should have an equal ratio of pyrimidine (cytosine and thymine) and purine (adenine and guanine). It means that the number of adenine molecules is equal to thymine molecules and the number of guanine molecules is equal to cytosine molecules. % A = % T and % G = % C
If dsDNA has 20% of cytosine, then according to the law, it would have 20% of guanine. Thus, percentage of G + C content = 40% The remaining 60% represents both A + T molecule. Since adenine and guanine are always present in equal numbers, the percentage of adenine molecule is 30%.

Question 5: Which property of DNA double helix led Watson and Crick to hypothesise semi- conservative mode of DNA replication? Explain.
Answer Watson and Crick observed that the two strands of DNA are anti-parallel and complementary to each other with respect to their base sequences. This type of arrangement in DNA molecule led to the hypothesis that DNA replication is semi- conservative. It means that the double stranded DNA molecule separates and then, each of the separated strand acts as a template for the synthesis of a new complementary strand. As a result, each DNA molecule would have one parental strand and a newly synthesized daughter strand. Since only one parental strand is conserved in each daughter molecule, it is known as semi-conservative mode of replication.

Question 7: How did Hershey and Chase differentiate between DNA and protein in their experiment while proving that DNA is the genetic material?
Answer Hershey and Chase worked with bacteriophage and E.coli to prove that DNA is the genetic material. They used different radioactive isotopes to label DNA and protein coat of the bacteriophage. They grew some bacteriophages on a medium containing radioactive phosphorus (32P) to identify DNA and some on a medium containing radioactive sulphur (35S) to identify protein. Then, these radioactive labelled phages were allowed to infect E.coli
bacteria. After infecting, the protein coat of the bacteriophage was separated from the bacterial cell by blending and then subjected to the process of centrifugation. Since the protein coat was lighter, it was found in the supernatant while the infected bacteria got settled at the bottom of the centrifuge tube. Hence, it was proved that DNA is the genetic material as it was transferred from virus to bacteria. 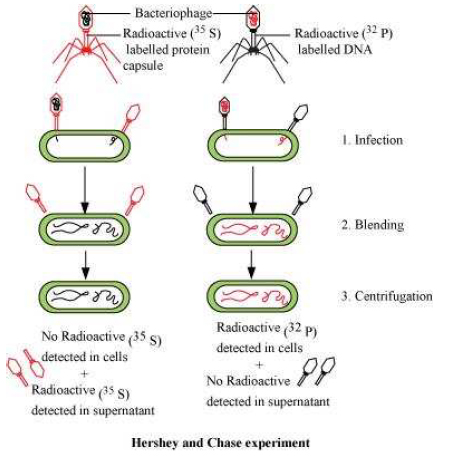 Question 8: Differentiate between the followings:
(a) Repetitive DNA and Satellite DNA
(b) mRNA and tRNA
(c) Template strand and Coding strand
Answer 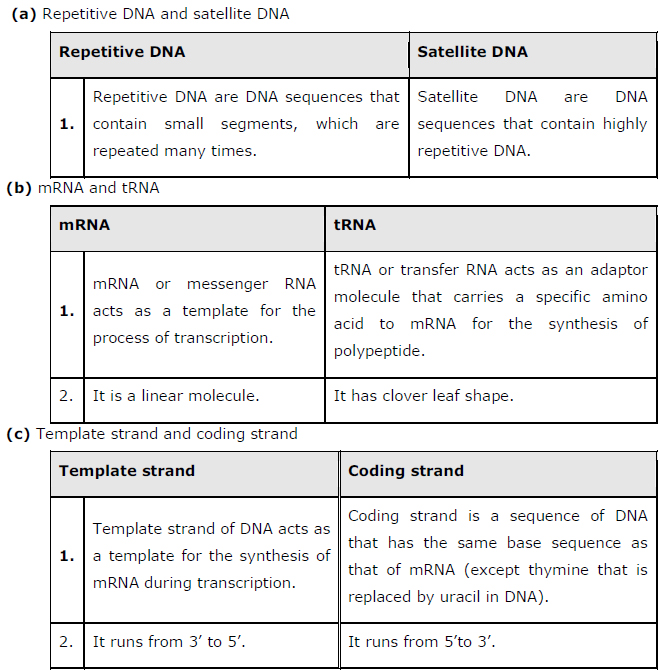 Question 9: List two essential roles of ribosome during translation.
Answer The important functions of ribosome during translation are as follows.
(a) Ribosome acts as the site where protein synthesis takes place from individual amino acids. It is made up of two subunits. The smaller subunit comes in contact with mRNA and forms a protein synthesizing complex whereas the larger subunit acts as an amino acid binding site.
(b) Ribosome acts as a catalyst for forming peptide bond. For example, 23s r-RNA in bacteria acts as a ribozyme.

Question 10: In the medium where E. coli was growing, lactose was added, which induced the lac operon. Then, why does lac operon shut down some time after addition of lactose in the medium?
Answer Lac operon is a segment of DNA that is made up of three adjacent structural genes, namely, an operator gene, a promoter gene, and a regulator gene. It works in a coordinated manner to metabolize lactose into glucose and galactose. In lac operon, lactose acts as an inducer. It binds to the repressor and inactivates it.
Once the lactose binds to the repressor, RNA polymerase binds to the promoter region. Hence, three structural genes express their product and respective enzymes are produced. These enzymes act on lactose so that lactose is metabolized into glucose and galactose. After sometime, when the level of inducer decreases as it is completely metabolized
by enzymes, it causes synthesis of the repressor from regulator gene. The repressor binds to the operator gene and prevents RNA polymerase from transcribing the operon. Hence, the transcription is stopped. This type of regulation is known as negative regulation. 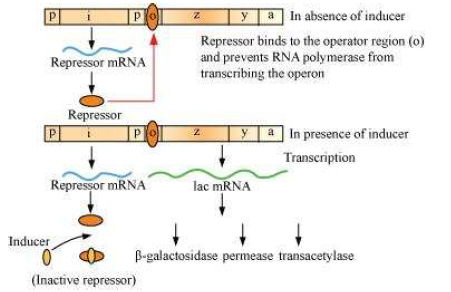 Question 11: Explain (in one or two lines) the function of the followings:
(a) Promoter
(b) tRNA
(c) Exons
Answer
(a) Promoter
Promoter is a region of DNA that helps in initiating the process of transcription. It serves as the binding site for RNA polymerase.
(b) tRNA
tRNA or transfer RNA is a small RNA that reads the genetic code present on mRNA. It carries specific amino acid to mRNA on ribosome during translation of proteins.
(c) Exons
Exons are coding sequences of DNA in eukaryotes that transcribe for proteins.

Question 12: Why is the Human Genome project called a mega project?
Answer Human genome project was considered to be a mega project because it had a specific goal to sequence every base pair present in the human genome. It took around 13 years for its completion and got accomplished in year 2006. It was a large scale project, which aimed at developing new technology and generating new information in the field of genomic studies. As a result of it, several new areas and avenues have opened up in the field of genetics, biotechnology, and medical sciences. It provided clues regarding the understanding of human biology.

Question 13: What is DNA fingerprinting? Mention its application.
Answer DNA fingerprinting is a technique used to identify and analyze the variations in various individuals at the level of DNA. It is based on variability and polymorphism in DNA sequences.
Application
(1) It is used in forensic science to identify potential crime suspects.
(2) It is used to establish paternity and family relationships.
(3) It is used to identify and protect the commercial varieties of crops and livestock.
(4) It is used to find out the evolutionary history of an organism and trace out the linkages between groups of various organisms. 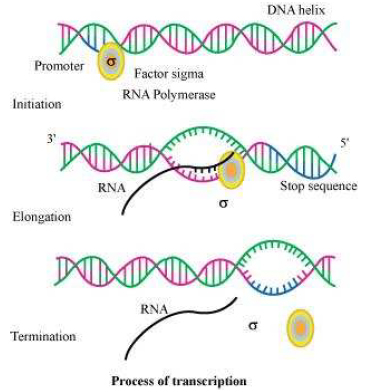 (b) Polymorphism
Polymorphism is a form of genetic variation in which distinct nucleotide sequence can exist at a particular site in a DNA molecule. This heritable mutation is observed at a high frequency in a population. It arises due to mutation either in somatic cell or in the germ cells. The germ cell mutation can be transmitted from parents to their
offsprings. This results in accumulation of various mutations in a population, leading to variation and polymorphism in the population. This plays a very important role in the process of evolution and speciation.
(c) Translation
Translation is the process of polymerizing amino acid to form a polypeptide chain. The triplet sequence of base pairs in mRNA defines the order and sequence of amino acids in a polypeptide chain.
The process of translation involves three steps.
(i) Initiation
(ii) Elongation
(iii) Termination
During the initiation of the translation, tRNA gets charged when the amino acid binds to it using ATP. The start (initiation) codon (AUG) present on mRNA is recognized only by the charged tRNA. The ribosome acts as an actual site for the process of translation and contains two separate sites in a large subunit for the attachment of subsequent amino acids. The small subunit of ribosome binds to mRNA at the initiation codon (AUG) followed by the large subunit. Then, it initiates the process of translation. During the elongation process, the ribosome moves one codon downstream along with mRNA so as to leave the space for binding of another charged tRNA. The amino acid brought by tRNA gets linked with the previous amino acid through a peptide bond and this process continues resulting in the formation of
a polypeptide chain. When the ribosome reaches one or more STOP codon (VAA, UAG, and UGA), the process of translation gets terminated. The polypeptide chain is released and the ribosomes get detached from mRNA. 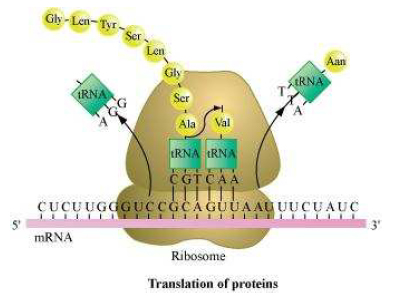 (d) Bioinformatics
Bioinformatics is the application of computational and statistical techniques to the field of molecular biology. It solves the practical problems arising from the management and analysis of biological data. The field of bioinformatics developed after the completion of human genome project (HGP). This is because enormous amount of data has been generated during the process of HGP that has to be managed and stored for easy access and interpretation for future use by various scientists. Hence, bioinformatics involves the creation of biological databases that store the vast information of biology. It develops certain tools for easy and efficient access to the information and its utilization. Bioinformatics has developed new algorithms and statistical methods to find out the relationship between the data, to predict protein structure and their functions, and to cluster the protein sequences into their related families. 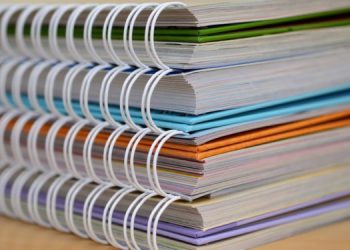