Assumptions of Kinetic Theory of Gases

Assuming permanent gases to be ideal, through experiments, it was established that gases irrespective of their nature obey the following laws.

At constant temperature the volume (V) of given mass of a gas is inversely proportional to its pressure (p), i.e.,

At constant pressure the volume (V) of a given mass of gas is directly proportional to its absolute temperature (T), i.e.,

At constant pressure the volume (V) of a given mass of a gas increases or decreases by 1/273.15 of its volume at 0°C for each 1°C rise or fall in temperature.

Volume of the gas at t°Ce

At constant volume the pressure p of a given mass of gas is directly proportional to its absolute temperature T, i.e. ,

At constant volume (V) the pressure p of a given mass of a gas increases or decreases by 1/273.15 of its pressure at 0°C for each l°C rise or fall in temperature.

Avogadro stated that equal volume of all the gases under similar conditions of temperature and pressure contain equal number molecules. This statement is called Avogadro’s hypothesis. According Avogadro’s law

Gases which obey all gas laws in all conditions of pressure and temperature are called perfect gases.

where a and b are called van der Waals’ constants.

Kinetic Energy of a Gas

(iii) For a given gas kinetic energy

where R is ideal gas constant and N = Avogadro number. 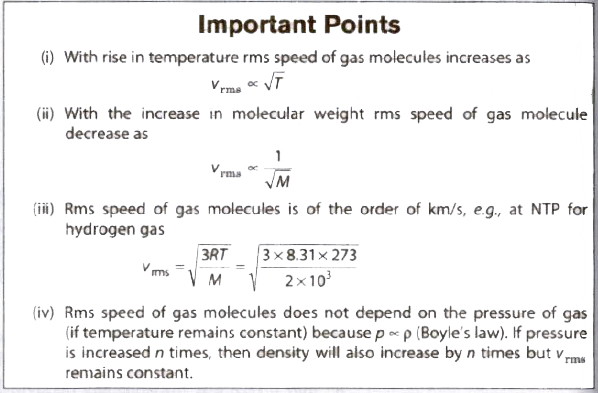 The degree of freedom for a dynamic system is the number of directions in which it can move freely or the number of coordinates required to describe completely the position and configuration of the system.

It is denoted by for N.

Degree of freedom of a system is given by

Specific heat of a gas

Mean free path is given by

where σ = diameter of the molecule, p = pressure of the gas,
T = temperature and k = Botlzmann’s constant.

Brownian suspended motion in both is observed with many liquids and gases.

Brownian motion is due to the unequal bombardment of the suspended Particles by the molecules of the surrounding medium.
All CBSE Notes for Class 11 Physics Maths Notes Chemistry Notes Biology Notes