The branch of physics which deals with the study of transformation of heat energy into other forms of energy and vice-versa.

A thermodynamical system is said to be in thermal equilibrium when macroscopic variables (like pressure, volume, temperature, mass, composition etc) that characterise the system do not change with time.

An assembly of an extremely large number of particles whose state can be expressed in terms of pressure, volume and temperature, is called thermodynamic system.

Thermodynamic system is classified into the following three systems

(i) Open System It exchange both energy and matter with surrounding.

(ii) Closed System It exchanges only energy (not matter) with surroundings.

(iii) Isolated System It exchanges neither energy nor matter with the surrounding.

A thermodynamic system is not always in equilibrium. For example, a gas allowed to expand freely against vacuum. Similary, a mixture of petrol vapour and air, when ignited by a spark is not an equilibrium state. Equilibrium is acquired eventually with time.

Thermodynamic Parameters or Coordinates or Variables

The state of thermodynamic system can be described by specifying pressure, volume, temperature, internal energy and number of moles, etc. These are called thermodynamic parameters or coordinates or variables.

Work done by a thermodynamic system is given by

where p = pressure and ΔV = change in volume. 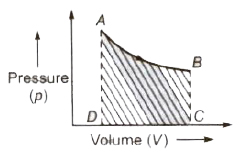 Work done by a thermodynamic system depends not only upon the initial and final states of the system but also depend upon the path followed in the process.

Work done by the Thermodynamic System is taken as

The total energy possessed by any system due to molecular motion and molecular configuration, is called its internal energy.

Internal energy of a thermodynamic system depends on temperature. It is the characteristic property of the state of the system.

Heat given to a thermodynamic system (ΔQ) is partially utilized in doing work (ΔW) against the surrounding and the remaining part increases the internal energy (ΔU) of the system.

First law of thermodynamics is a restatement of the principle conservation of energy.

In isothermal process, change in internal energy is zero (ΔU = 0).

In adiabatic process, if gas expands, its internal energy and hence, temperature decreases and vice-versa.

A thermodynamical process is said to take place when some changes’ occur in the state of a thermodynamic system i.e., the therrnodynamie parameters of the system change with time.

(i) Isothermal Process A process taking place in a thermodynamic system at constant temperature is called an isothermal process.

These process follows Boyle’s law, according to which

From first law of thermodynamic dQ = dW, i.e., heat given to the system is equal to the work done by system surroundings.

After differentiating P V = constant, we have

P – V curve for this persons is a rectangular hyperbola

(a) Melting process is an isothermal change, because temperature of a substance remains constant during melting.

(b) Boiling process is also an isothermal operation.

(ii) Adiabatic Process A process taking place in a thermodynamic system for which there is no exchange of heat between the system and its surroundings.

These process follows Poisson’s law, according to which

Work done in an adiabatic process is

where Ti and Tf are initial and final temperatures. Examples

(a) Sudden compression or expansion of a gas in a container with perfectly non-conducting wall.

(b) Sudden bursting of the tube of a bicycle tyre.

(c) Propagation of sound waves in air and other gases.

(iii) Isobaric Process A process taking place in a thermodynamic system at constant pressure is called an isobaric process.

Molar heat capacity of the process is Cp and dQ = nCpdT.

(iv) Isochoric Process A process taking place in a tlaermodynars system at constant volume is called an isochoric process.

(v) Cyclic Process When a thermodynamic system returns to . initial state after passing through several states, then it is called cyclic process.
Efficiency of the cycle is given by

Work done by the cycle can be computed from area enclosed cycle on p- V curve.

The graph drawn between the pressure p and the volume V of a given mass of a gas for an isothermal process is called isothermal curve and for an adiabatic process it is called adiabatic curve . 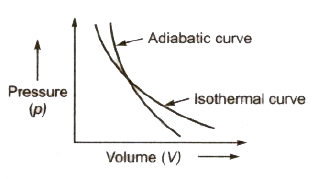 The slope of the adiabatic curve

= γ x the slope of the isothermal curve

There are two types of volume elasticities of gases

Ratio between isothermal and adiabatic modulus

It is impossible to obtain a continuous supply of work from a body by cooling it to a temperature below the coldest of its surroundings.

It is impossible to construct a heat engine that will convert heat completely into work.

All these statements are equivalent as one can be obtained from the other.

Entropy is a physical quantity that remains constant during a reversible adiabatic change.

Change in entropy is given by dS = δQ / T

Where, δQ = heat supplied to the system

Entropy of a system increases in an irreversible process

(i) Source of heat at higher temperature

Thermal efficiency of a heat engine is given by

where Q1 is heat absorbed from the source,

Q2 is heat rejected to the sink and T1 and T2 are temperatures of source and sink.

Heat engine are of two types

(i) External Combustion Engine In this engine fuel is burnt a chamber outside the main body of the engine. e.g., steam engine. In practical life thermal efficiency of a steam engine varies from 12% to 16%.

(ii) Internal Combustion Engine In this engine. fuel is burnt inside the main body of the engine. e.g., petrol and diesel engine. In practical life thermal efficiency of a petrol engine is 26% and a diesel engine is 40%. 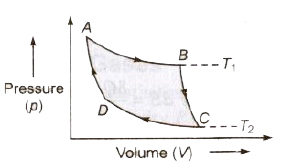 The net work done per cycle by the engine is numerically equal to the area of the loop representing the Carnot’s cycle .

After doing the calculations for different processes we can show that

[Efficiency of Carnot engine is maximum (not 1000/0) for given temperatures T1 and T2. But still Carnot engine is not a practical
engine because many ideal situations have been assumed while designing this engine which can practically not be obtained.]

A refrigerator or heat pump is a device used for cooling things. It absorb heat from sink at lower temperature and reject a larger amount of heat to source at higher temperature.

Coefficient of performance of refrigerator is given by

where Q2 is heat absorbed from the sink, Q1 is heat rejected to source and T1 and T2 are temperatures of source and sink.

Relation between efficiency (η) and coefficient of performance (β)