THERE was once a wrestler called Vijay Singh. A tall man with massive shoulders and muscular arms, he towered over others like a giant. Vijay Singh, people said, was a born wrestler and could beat all other wrestlers in the world.

This pahalwan had but one shortcoming which often landed him in awkward situations. He was fond of boasting. One day, he was sitting in the market-place surrounded by several young men. After drinking many glasses of milk, he

suddenly proclaimed, “Why are people afraid of ghosts? I am not. I wish I met a stout ghost. I’d teach him a lesson.”

There were murmurs of applause as well as apprehension among the young men. “If you walk alone at night through the Haunted Desert,” one of them said, “you are sure to meet ghosts. They roam there freely. Strange shrieks and moans can be heard all over the place. Travellers have been looted and killed. Would you really want to go there?” Vijay Singh’s mighty heart missed a beat or two. Why did he have to boast?

“Yes, I have heard of the Haunted Desert,” he said nonchalantly. “I think it’s just a fairy tale.”

“Oh no,” said one of his admirers, “it’s true. This place is ten miles to the west on the road to Jaisalmer. The landmark is an ugly black rock that looks like the head of a camel. Beyond that there is nothing but sand and wilderness and, of course, ghosts.” 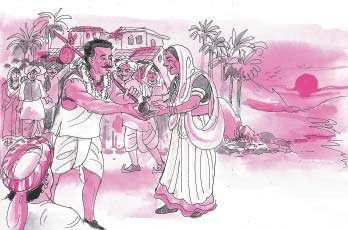 village turned up that evening to bid farewell to Vijay Singh, who was ready to set out west. Just then an old woman came forward and thrust a small packet into his hands, and Vijay Singh started walking into the red sunset of the desert.

As he walked, the night deepened. The moon was bright and the stars shone clearly in the Rajasthan sky. Still a few miles short of his destination, Vijay Singh remembered the old woman’s packet. He opened it and found nothing but a lump of salt and an egg. The old woman was well-known for her eccentricities.

As Vijay Singh stepped into the Haunted Desert, he heard a voice. “Vijay Singh, Vijay Singh! You will get lost in the desert. Come this way. I am your friend, Natwar.” At once Vijay Singh realised it was not his friend but a ghost. Trying to sound brave, he called back, “Where are you, my dear Natwar? It’s dark and I cannot see you. Come here and show me the way.” Like all good wrestlers, Vijay Singh wanted to size up his enemy.

Soon the ghost appeared at his side. Vijay Singh peered into his face and declared, “You are just a plain, lying ghost. Anyway, now I don’t have to walk all night. I was longing to meet you.” Not used to insults, the ghost was taken aback. People generally started back in horror when they met him. They often fainted. But here was this unfeeling creature claiming he wanted to meet a ghost. It didn’t make sense.

“Really, I don’t know why you longed to meet me,” the ghost said.

“That proves,” said Vijay Singh in a bored voice, “that you are a stupid ghost. The least a ghost can do is to read a man’s thoughts. However, a worthless ghost like you is better than no ghost. The fact is, I am tired of wrestling with men. I want to fight a ghost.”

The ghost was speechless. Marshalling his ghostly wits, he made an attempt to look Vijay Singh scornfully in the eye.

“Frankly,” he said, “you don’t appear all that strong to me.”

“Appearances can be deceptive,” Vijay Singh said. “Take your own case. You claim to be Natwar, though actually you are a rascal of a ghost. If you doubt my strength, let me give you a demonstration of it.”

VIJAY Singh picked up a piece of rock from the sand. “Take this,” he offered it to the ghost, “and squeeze it hard. It is filled with fluid. See if I am wrong.” While the ghost tried to squeeze the rock first with one hand, then with both, Vijay Singh stealthily took out the egg from his pocket.

Vijay Singh snatched the rock from the ghost and placed it between both hands and squeezed. At once the yellow yolk oozed from around his 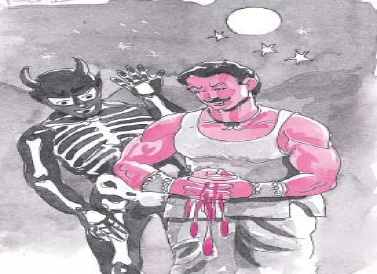 fingers, and the crackling of the egg-shell created the illusion of the stone being crushed. The ghost was so astonished he did not notice Vijay Singh bending to clean his hands with sand and
disposing of the tell-tale shell. Vijay Singh then picked up another piece of rock and gave it to the ghost. Without a word the ghost took it, felt it, and peered at it. Vijay Singh put his hand into his pocket to take out the lump of salt.

“This is only a stone,” protested the ghost. “And anyway it is too dark to see.”

“Never heard of a ghost who can’t see in the dark!” remarked Vijay Singh. “That stone which you hold in your hand contains salt. Crumble it and see.” Again the ghost tried to crush the stone, but in vain. He handed over the stone to Vijay Singh. The ghost was now beginning to doubt his ghostly powers.

“I can see that you’re not going to be a worthy opponent. 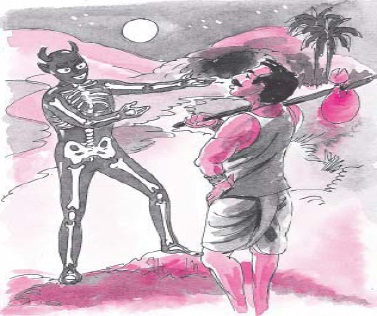 What’s the use of wrestling with a weakling whom I can floor in a minute?” So saying, Vijay Singh casually crumbled the lump of salt and let the stone drop in the darkness. He held out his hand and commanded the ghost to taste the powdered stone.

Mesmerised with the pahalwan’s extraordinary strength, the ghost
did as he was told. Alarm shot through him. This man could easily vanquish him in a wrestling bout in the dark. But perhaps, he could be tricked in other ways. Assuming a servile manner, the ghost said, “Friend
Vijay Singh, it is an honour to meet a man like you! I admit to being defeated. But where will you go tonight? Rest in my house. You can leave tomorrow.”

Now thoroughly elated, Vijay Singh replied, “I cannot refuse your hospitality but tomorrow you will go with me as my prisoner. I must display the trophy of my victory to my people!” The ghost bowed in agreement, but silently vowed to kill Vijay Singh in the night. He led him to his house in the cave.

The ghost fed him dry fruits and a lot of milk, and later led him to a luxurious bed to sleep on, complete with pillows and bolsters.

But Vijay Singh lay awake listening to the snores of the ghost. In the middle of the night, he slipped off his bed. He placed a bolster in the centre of the bed, throwing over it a 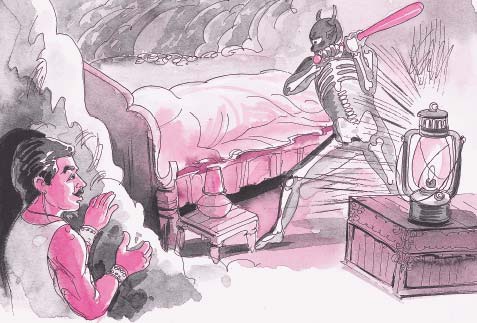 coverlet to make it look exactly like a sleeping man. Having done this he crouched watchfully in a dark corner.

Sure enough, just before the break of dawn, the ghost approached the bed armed with a stout club. He brought the club down on what he thought was Vijay Singh’s head. Not hearing even a groan, he smiled, pleased that he had killed his enemy.

However, just to make doubly sure, he struck the bolster six times more. Satisfied with his work, he returned to his couch, and covering his head, settled down to sleep again. Meanwhile, Vijay Singh crept silently back into bed. After a pause, he groaned, as if in disgust, threw back his coverlet, and sat up.

Disturbed by the noise, the ghost peeped from under his bedclothes to see the strong man stretching his arms above his head and yawning. For a moment the ghost turned rigid with shock. “Friend ghost, there are insects in your cave,” said Vijay Singh in a complaining voice. “Here I was, enjoying the sweetest sleep I’ve had in years, and there comes this insect to trouble me. I distinctly counted seven flappings of its wings. Of course, it has not bitten me, but it’s most annoying.” The ghost panicked. Those seven blows would have reduced any other man to pulp. ‘There is no safety near a formidable wrestler like this,’ he thought and fled from the cave leaving behind all his ill-gotten wealth.

It took several camels from the village to remove the property Vijay Singh had acquired. He returned much of it to the rightful owners. He went especially to the old woman, thanked her for her invaluable gift, and asked for her granddaughter’s hand in marriage.

Thenceforth, Vijay Singh was more careful about boasting. It is said that no traveller was ever troubled again in the Haunted Desert.

1. How did Vijay Singh use the egg? How did he use the lump of salt?

2. Why did Vijay Singh conclude that the ghost would not be a worthy opponent to him? Was he fair in his judgement?

3. Why did Vijay Singh ask the ghost to accompany him to town next day?

4. What made the ghost believe Vijay Singh was dead?

5. Vijay Singh complained of insects in the cave. What was he referring to, and why?

6. Was it really a ghost who Vijay Singh befooled? Who do you think it was?