NCERT Class VI Social Studies Chapter 1 What, Where, How and When?

NCERT Class VI Social Studies Chapter 1 What, Where, How and When?

National Council of Educational Research and Training (NCERT) Book for Class VI
Subject: Social Studies
Chapter: Chapter 1 – What, Where, How and When?

Class VI NCERT Social Studies Text Book Chapter 1 What, Where, How and When? is given below. 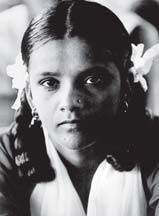 Rasheeda sat reading the newspaper. Suddenly, her eyes fell on a small headline: “One Hundred Years Ago.” How, she wondered, could anyone know what had happened so many years ago?

Finding out what happened

Yesterday: you could listen to the radio, watch television, read a newspaper.

Last year: ask somebody who remembers.
But what about long, long ago? Let us see how it can be done.

What can we know about the past?

There are several things we can find out — what people ate, the kinds of clothes they wore, the houses in which they lived. We can find out about the lives of hunters, herders, farmers, rulers, merchants, priests, crafts persons, artists, musicians, and scientists. We can also find out about the games children played, the stories they heard, the plays they saw, the songs they sang.

Where did people live?

Find the river Narmada on Map 1 (page 2). People have lived along the banks of this river for several hundred thousand years. Some of the earliest people who lived here were skilled gatherers, — that is, people who gathered their food. They knew about the vast wealth of plants in the surrounding forests, and collected roots, fruits and other forest produce for their food. They also hunted animals.

Now find the Sulaiman and Kirthar hills to the northwest. Some of the areas where women and men first began to grow crops such as wheat and barley about 8000 years ago are located here. People also began rearing animals like sheep, goat, and cattle, and lived in villages. Locate the Garo hills to the north-east and the Vindhyas in central India. These were some of the other areas where 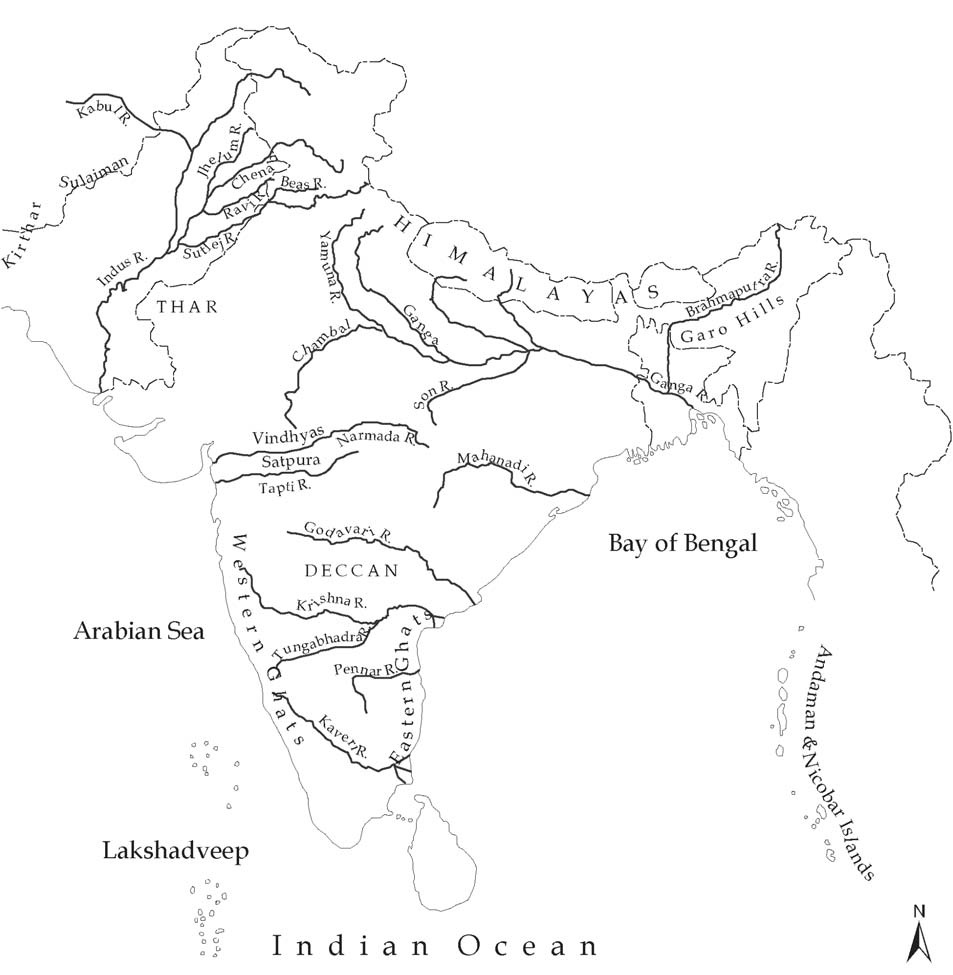 agriculture developed. The places where rice was first grown are to the north of the Vindhyas.

Locate the Ganga and its tributary called the Son. In ancient times the area along these rivers to the south of the Ganga was known as Magadha. Its rulers were very powerful, and set up a large kingdom. Kingdoms were set up in other parts of the country as well.

Throughout, people travelled from one part of the subcontinent to another. The hills and high mountains including the Himalayas, deserts, rivers and seas made journeys dangerous at times, but never impossible. So, men and women moved in search of livelihood, as also to escape from natural disasters like floods or droughts. Sometimes men marched in armies, conquering others’ lands. Besides, merchants travelled with caravans or ships, carrying valuable goods from place to place. And religious teachers walked from village to village, town to town, stopping to offer instruction and advice on the way. Finally, some people perhaps travelled driven by a spirit of adventure, wanting to discover new and exciting places. All these led to the sharing of ideas between people.

Why do people travel nowadays?

Look at Map 1 once more. Hills, mountains and seas form the natural frontiers of the subcontinent. While it was difficult to cross these frontiers, those who wanted could and did scale the mountains and cross the seas. People from across the frontiers also came into the subcontinent and settled here. These movements of people enriched our cultural traditions. People have shared new ways of carving stone, composing music, and even cooking food over several hundreds of years.

Names of the land

Two of the words we often use for our country are India and Bharat. The word India comes from the Indus, called Sindhu in Sanskrit. Find Iran and Greece in your atlas. The Iranians and the Greeks who came through the northwest about 2500 years ago and were familiar with the Indus, called it the Hindos or the Indos, and the land to the east of the river was called India. The name Bharata was
used for a group of people who lived in the northwest, and who are mentioned in the Rigveda, the earliest composition in Sanskrit (dated to about 3500 years ago). Later it was used for the country.

Finding out about the past 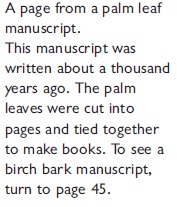 There are several ways of finding out about the past. One is to search for and read books that were written long ago. These are called manuscripts, because they were written by hand (this comes from the Latin word ‘manu’, meaning hand). These were usually written on palm leaf, or on the specially prepared bark of a tree known as the birch, which grows in the Himalayas. Over the years, many manuscripts were eaten away by insects, some were destroyed, but many

have survived, often preserved in temples and monasteries. These books dealt with all kinds of subjects: religious beliefs and practices, the lives of kings, medicine and science. Besides, there were epics, poems, plays. Many of these were written in Sanskrit, others were in Prakrit (languages used by ordinary people) and Tamil.

We can also study inscriptions. These are writings on relatively hard surfaces such as stone or metal. Sometimes, kings got their orders
inscribed so that people could see, read and obey them. There are other kinds of inscriptions as well, where men and women (including kings and queens) recorded what they did. For example,

Can you think of 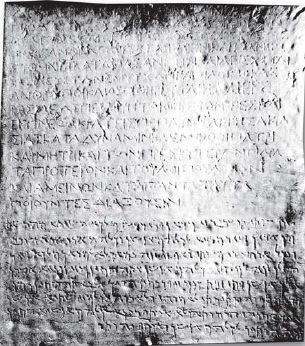 the advantages of writing on a hard
surface? And what could have been the difficulties?

There were many other things that were made and used in
the past. Those who study these objects are called archaeologists.

They study the remains of buildings made of stone and brick, paintings and sculpture. They also explore and excavate (dig under the surface of the earth) to find tools, weapons, pots, pans, ornaments and coins. Some of these objects may be made of stone, others of bone, baked clay or metal. Objects that are made of hard, imperishable substances usually survive for a long time. 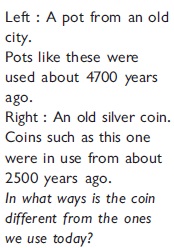 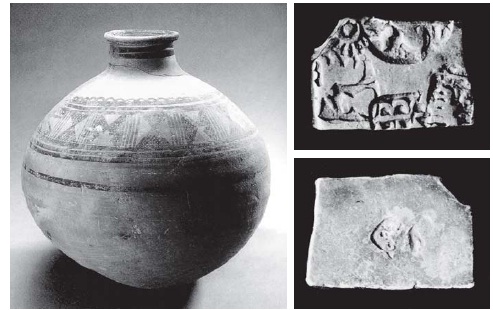 Archaeologists also look for bones — of animals, birds, and fish — to find out what people ate in the past. Plant remains survive far more rarely — if seeds of grain or pieces of wood have been burnt, they survive in a charred form. Do you think cloth is found frequently by archaeologists?

Historians, that is, scholars who study the past, often use the word source to refer to the information found from manuscripts, inscriptions and archaeology. Once sources are found, learning about the past becomes an adventure, as we reconstruct it bit by bit. So historians and archaeologists are like detectives, who use all these sources like clues to find out about our pasts.

One past or many?

Did you notice the title of this book, Our Pasts? We have used the word ‘pasts’ in plural to draw attention to the fact that the past was different for different groups of people. For example, the lives of herders or farmers were different from those of kings and queens, the lives of merchants were different from those of crafts persons, and so on. Also, as is true even today, people followed different practices and customs in different parts of the country. For example, today most people living in the Andaman Islands get their own food by fishing, hunting, and collecting forest produce. By contrast, most people living in cities depend on others for supplies of food. Differences such as these existed in the past as well.

Besides, there is another kind of difference. We know a great deal about kings and the battles they fought because they kept records of their victories. Generally, ordinary people such as hunters, fishing folk, gatherers, farmers or herders did not keep records of what they did. While archaeology helps us to find out about their lives, there is much that remains unknown.

What do dates mean?

If somebody asks you the date, you will probably mention the day, month and year, 2000 and something. These years are counted from the date generally assigned to the birth of Jesus Christ, the founder of Christianity. So, 2000 means 2000 years after the birth of Christ. All dates before the birth of Christ are counted backwards and usually have the letters BC (Before Christ) added on. In this book, we will refer to dates going back from the present, using 2000 as our starting point. 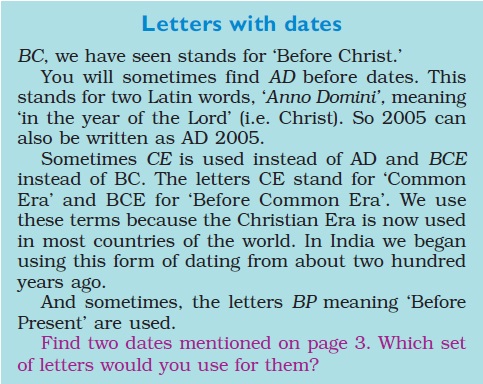 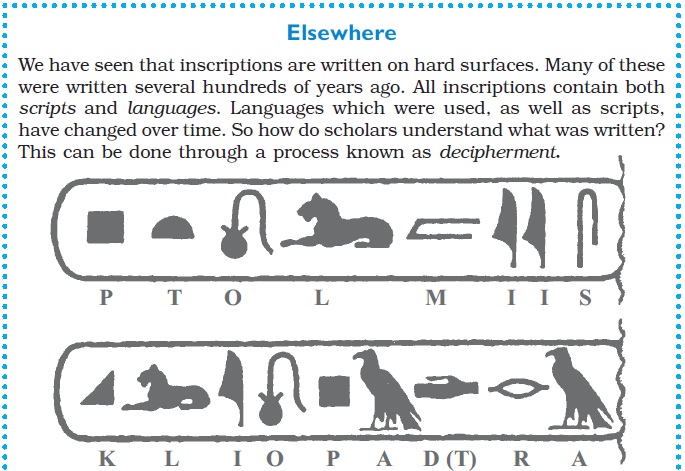 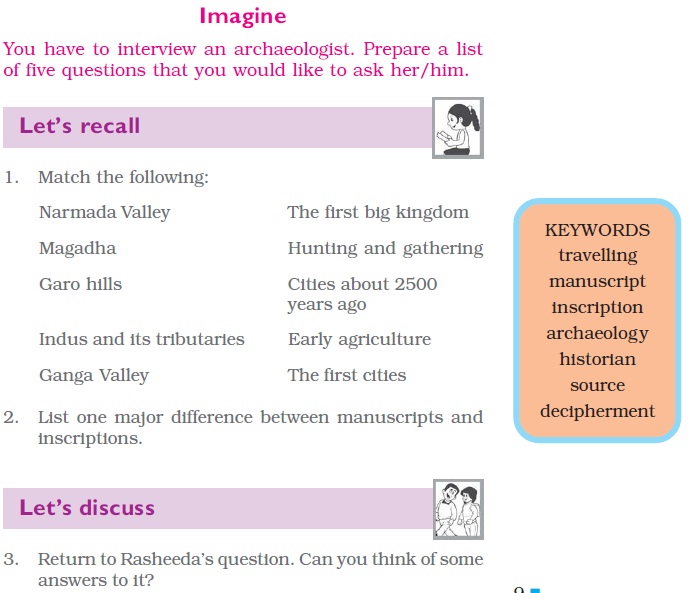 4. Make a list of all the objects that archaeologists may find. Which of these could be made of stone?

5. Why do you think ordinary men and women did not generally keep records of what they did?

6. Describe at least two ways in which you think the lives of kings would have been different from those of farmers.

7. Find the word crafts persons on page 1. List at least five different crafts that you know about today. Are the crafts persons — (a) men (b) women (c) both men and women?

8. What were the subjects on which books were written in the past? Which of these would you like to read?