Class VI NCERT Social Studies Text Book Chapter 2 On The Trial of the Earliest People is given below.

Tushar was going from Delhi to Chennai for his cousin’s 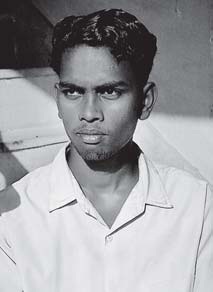 wedding. They were travelling by train and he had managed to squeeze into the window seat, his nose glued to the glass pane. As he watched trees and houses fly past, his uncle tapped his shoulder and said: “Do you know that trains were first used about 150 years ago, and that people began using buses a few decades later?” Tushar wondered, when people couldn’t travel quickly from one place to another, did they spend their entire lives wherever they were born? Not quite.

The earliest people: why were they on the move?

We know about people who lived in the subcontinent as early as two million years ago. Today, we describe them as hunter-gatherers. The name comes from the way in which they got their food. Generally, they hunted wild animals, caught fish and birds, gathered fruits, roots, nuts, seeds,
leaves, stalks and eggs. The immense variety of plants in a tropical land like ours meant that gathering plant produce was an extremely important means of obtaining food.

None of these things was easy to do. There are several animals that run faster than us, many that are stronger. To hunt animals or catch fish and birds, people need to be alert, quick, and have lots of presence of mind. To collect plant produce, you need to find out which plants or parts of plants are edible, that is, can be eaten, as many can be poisonous. You also need to find out about the seasons when the fruits ripen. List the skills and knowledge that the children of these communities had.

Do you have these skills and knowledge?

There are at least four reasons why huntergatherers moved from place to place.

Second, animals move from place to place — either in search of smaller prey, or, in the case of deer and wild cattle, in search of grass and leaves. That is why those who hunted them had to follow their movements.

Third, plants and trees bear fruit in different seasons. So, people may have moved from season to season in search of different kinds of plants.

Fourth, people, plants and animals need water to survive. Water is found in lakes, streams and rivers. While many rivers and lakes are perennial (with water throughout the year) others are seasonal. People living on their banks would have had to go in search of water during the dry seasons (winter and summer). Besides, people may have travelled to meet their friends and relatives. Remember, they travelled on foot.

How do you come to school?

How long would it take you to walk from your home to school?

How long would it take you if you took a bus or rode a bicycle?

How do we know about these people?

Archaeologists have found some of the things hunter-gatherers made and used. It is likely that people made and used tools of stone, wood and bone, of which stone tools have survived best. 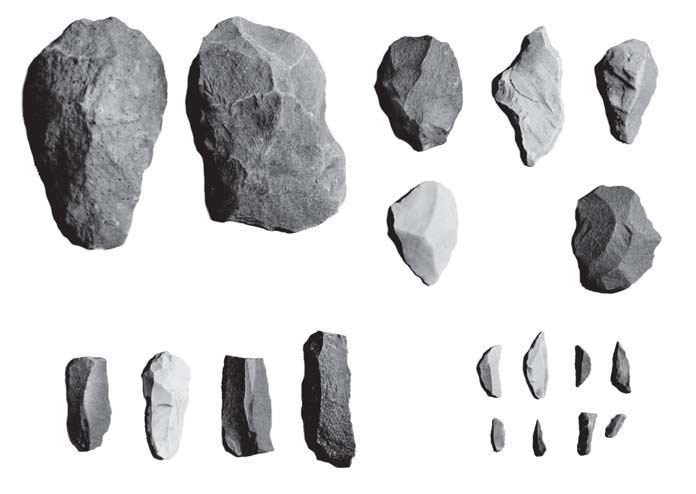 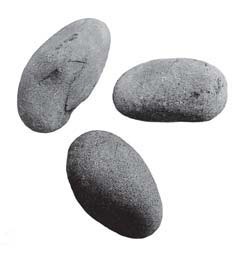 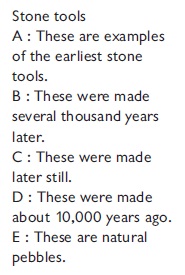 Some uses of stone tools are given below. Make a list of what these tools were used for and try and decide which of these tasks could be performed using a natural pebble. Give reasons for your answer.

Some of these stone tools were used to cut meat and bone, scrape bark (from trees) and hides (animal skins), chop fruit and roots. Some may have been attached to handles of bone or wood, to make spears and arrows for hunting. Other tools were used to chop wood, which was used as firewood. Wood was also used to make huts and tools.

Choosing a place to live in

Look at Map 2 below. All the places marked with red triangles are sites from which archaeologists have found evidence of hunter-gatherers. (Huntergatherers lived in many more places. Only some are shown on the map). Many sites were located near sources of water, such as rivers and lakes. 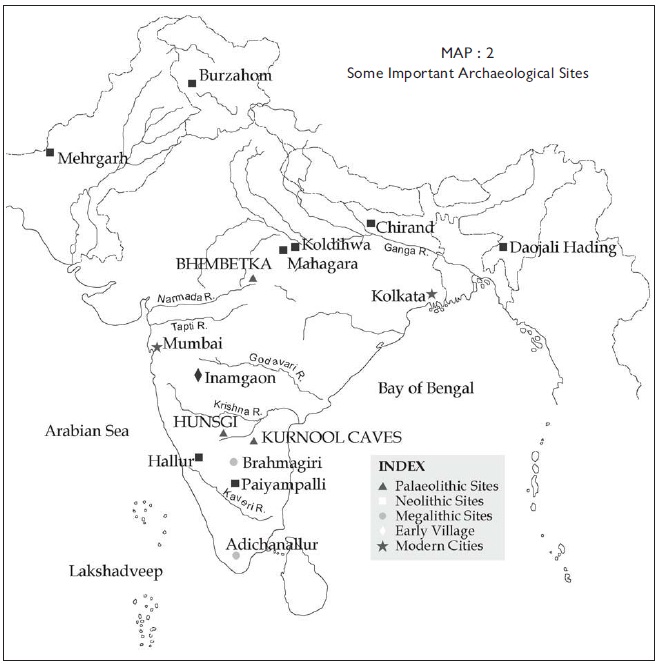 As stone tools were important, people tried to

find places where good quality stone was easily available. Places where stone was found and where people made tools are known as factory sites.

How do we know where these factories were? Usually, we find blocks of stone, tools that were made and perhaps discarded because they were not perfect, and chips of waste stone left behind at these sites. Sometimes, people lived here for longer spells of time. These sites are called habitation-cum-factory sites.

If you had to describe the place you live in, which of the terms would you choose? 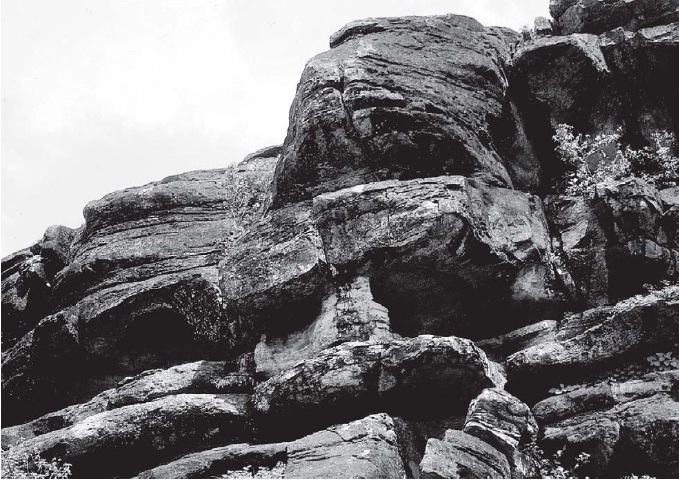 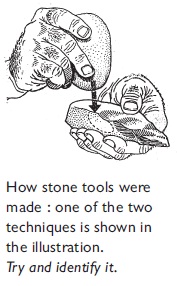 1. The first is called stone on stone. Here, the pebble from which the tool was to be made (also called the core) was held in one hand. Another stone, which was used as a hammer was held in the other hand. The second stone was used to strike off flakes from the first, till the required shape was obtained.

2. Pressure flaking: Here the core was placed on a firm surface. The hammer stone was used on a piece of bone or stone that was placed on the core, to remove flakes that could be shaped into tools.

Finding out about fire

Find the Kurnool caves on Map 2 (page14). Traces of ash have been found here. This suggests that people were familiar with the use of fire. Fire could have been used for many things: as a source of light, to cook meat, and to scare away animals.

What do we use fire for today?

Around 12,000 years ago, there were major changes in the climate of the world, with a shift to relatively warm conditions. In many areas, this led to the development of grasslands. This in turn led to an increase in the number of deer, antelope, goat, sheep and cattle, i.e. animals that survived on grass.

Those who hunted these animals now followed them, learning about their food habits and their breeding seasons. It is likely that this helped people to start thinking about herding and rearing these animals themselves. Fishing also became important.

This was also a time when several grain bearing grasses, including wheat, barley and rice grew naturally in different parts of the subcontinent. Men, women and children probably collected these grains as food, and learnt where they grew, and when they ripened. This may have led them to think about growing plants on their own.

Archaeologists have given lengthy names for the time that we are studying. They call the earliest period the Palaeolithic. This comes from two Greek words, ‘palaeo’, meaning old, and ‘lithos’, meaning stone. The name points to the importance of finds of stone tools. The Palaeolithic period extends from 2 million years ago to about 12,000 years ago. This long stretch of time is divided into the Lower, Middle and Upper Palaeolithic. This long span of time covers 99% of human history.

The period when we find environmental changes, beginning about 12,000 years ago till about 10,000 years ago is called the Mesolithic (middle stone). Stone tools found during this period are generally tiny, and are called microliths. Microliths were probably stuck on to handles of bone or wood to make tools such as saws and sickles. At the same time, older varieties of tools continued to be in use.

Look at the illustration on page13. Do you notice any difference in the tools belonging to these periods?

The next stage, from about 10,000 years ago, is known as the Neolithic. You will be learning about the Neolithic in Chapter 3.

What do you think the term Neolithic means?

We have also mentioned the name of some places. You will find the names of many more places in later chapters. Very often, we use presentday names of the places where people lived in the past, because we do not know what they called them.

Rock paintings and what they tell us 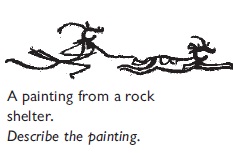 Many of the caves in which these early people lived have paintings on the walls. Some of the best examples are from Madhya Pradesh and southern Uttar Pradesh. These paintings show wild animals, drawn with great accuracy and skill.

We have seen that the earliest people hunted, gathered plant produce, made stone tools, and
painted on cave walls. Is there any way of finding out whether women hunted, or men made stone tools, whether women painted or men gathered fruits and nuts? At present, we do not really know. However, there are at least two possibilities. It is likely that both men and women may have done many of these things together. It is also possible that some tasks were done only by women and others only by men. And again, there could have been different practices in different parts of the subcontinent.

Ostriches were found in India during the Palaeolithic period. Large quantities of ostrich egg shells were found at Patne in Maharashtra. Designs were engraved on some pieces, while beads were also made out of them.

What do you think the beads could have been used for?
Where do we find ostriches today?

Find Hunsgi on Map 2 (page14). A number of early Palaeolithic sites were found here. At some sites, a large number of tools, used for all sorts of activities, were found. These were probably habitation-cum factory sites. In some of the other, smaller sites, there is evidence to suggest that tools were made. Some of the sites were close to springs. Most tools were made from limestone,
which was locally available. Can you think of a term for the second type of sites? 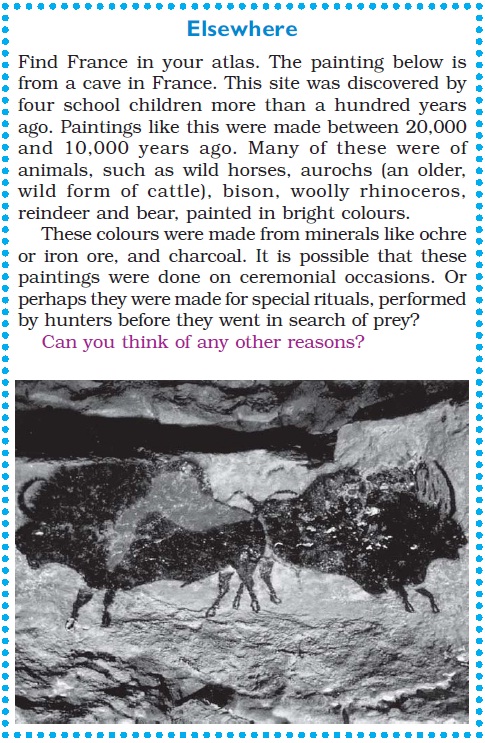 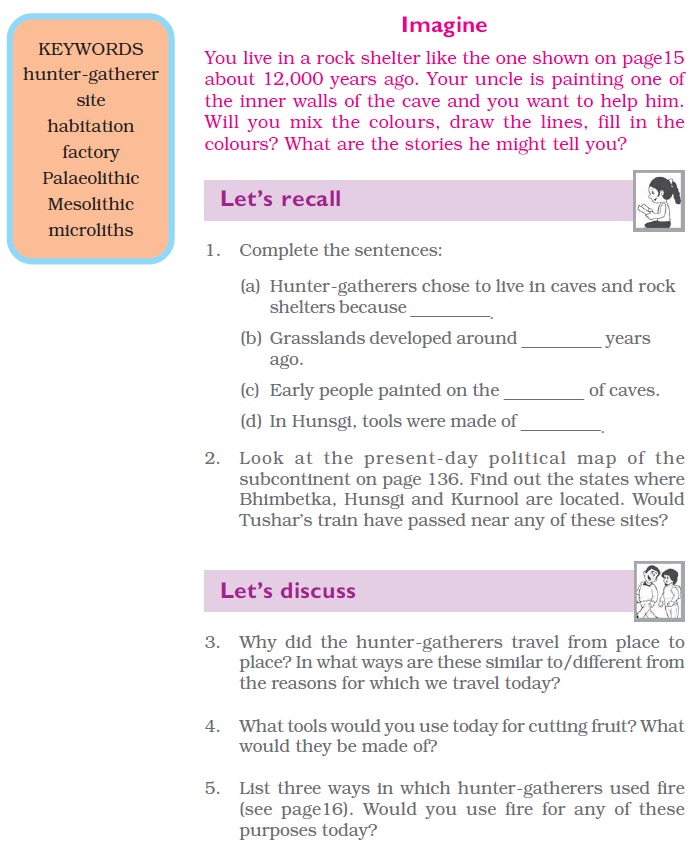 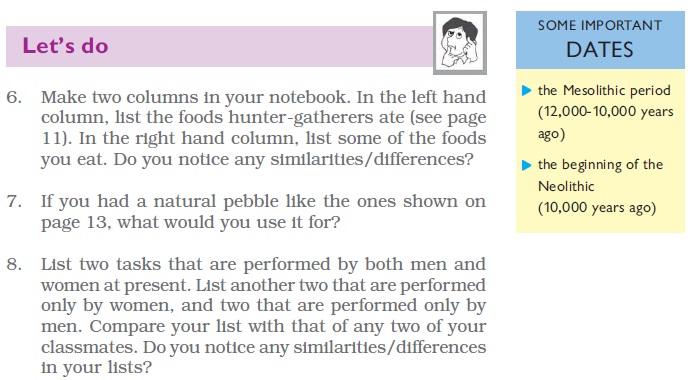