Class VI NCERT Social Studies Text Book Chapter 3 From Gathering to Growing Food is given below. 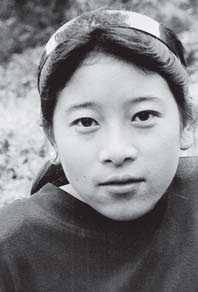 Neinuo was eating her favourite food — boiled rice, squash, pumpkins, beans and meat. Her grandmother had grown the squash, pumpkin and beans in the little garden plot at the back of her house. She remembered the food had been so different when she had been to Madhya Pradesh as part of a school trip. It was hot and spicy. Why was that so?

Today, most of our food such as fruit, vegetables, grain, milk and meat comes from plants that are grown and animals that are reared. Different plants grow in different conditions — rice, for example, requires more water than wheat and barley. This explains why farmers grow some crops in some areas and not in other areas. Different animals too, prefer different environments — for instance,
sheep and goat can survive more easily than cattle in dry, hilly environments. But, as you saw in Chapter 2, women and men did not always produce their own food.

The beginnings of farming and herding

We have seen in Chapter 2 that the climate of the world was changing, and so were plants and animals that people used as food. Men, women and children probably observed several things: the places where edible plants were found, how seeds broke off stalks, fell on the ground, and new plants sprouted from them. Perhaps they began looking after plants — protecting them from birds and
animals so that they could grow and the seeds could ripen. In this way people became farmers. Women, men and children could also attract and then tame animals by leaving food for them near their shelters. The first animal to be tamed was the wild ancestor of the dog. Later, people encouraged animals that were relatively gentle to come near the camps where they lived. These animals such as sheep, goat, cattle and also the pig lived in herds, and most of them ate grass. Often, people protected these animals from attacks by other wild animals. This is how they became herders.

Can you think of any reasons why the dog was perhaps the first animal to be tamed? 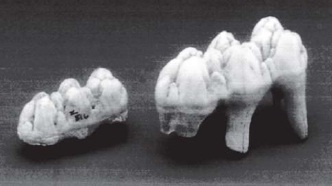 new plants (and seeds) will have the same qualities.

Look at these two sets of teeth. Which do you think belongs to a wild pig and which to a domesticated animal?

Domestication was a gradual process that took place in many parts of the world. It began about 12,000 years ago. Virtually all the plant and animal produce that we use as food today is a result of domestication. Some of the earliest plants to be domesticated were wheat and barley. The earliest domesticated animals include sheep and goat.

A new way of life 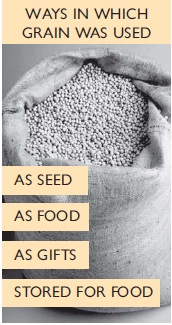 If you plant a seed, you will notice that it takes some time to grow. This may be for several days, weeks, months and in some cases years. When people began growing plants, it meant that they had to stay in the same place for a long time looking after the plants, watering, weeding, driving away animals and birds — till the grain ripened. And then, the grain had to be used carefully.

As grain had to be stored for both food and seed, people had to think of ways of storing it. In many areas, they began making large clay pots, or wove baskets, or dug pits into the ground. Do you think hunter-gatherers would have made and used pots? Give reasons for your answer.

Animals multiply naturally. Besides, if they are looked after carefully, they provide milk, which is an important source of food, and meat, whenever required. In other words, animals that are reared
can be used as a ‘store’ of food.

Apart from food, what are the other things that could have been obtained from animals?

What are animals used for today?

Finding out about the first farmers and herders

Turn to Map 2 (page14). You will notice a number of blue squares. Each marks a site from where archaeologists have found evidence of early farmers and herders. These are found all over the subcontinent. Some of the most important ones are in the north-west, in present-day Kashmir, and in east and south India.

To find out whether these sites were settlements of farmers and herders, scientists study evidence of plants and animal bones. One of the most exciting finds includes remains of burnt grain. (These may have been burnt accidentally or on purpose). Scientists can identify these grains, and so we know that a number of crops were grown in different parts of the subcontinent. They can also identify the bones of different animals.

Look at the table below to see where evidence of grain and bones of domesticated animals have been found. 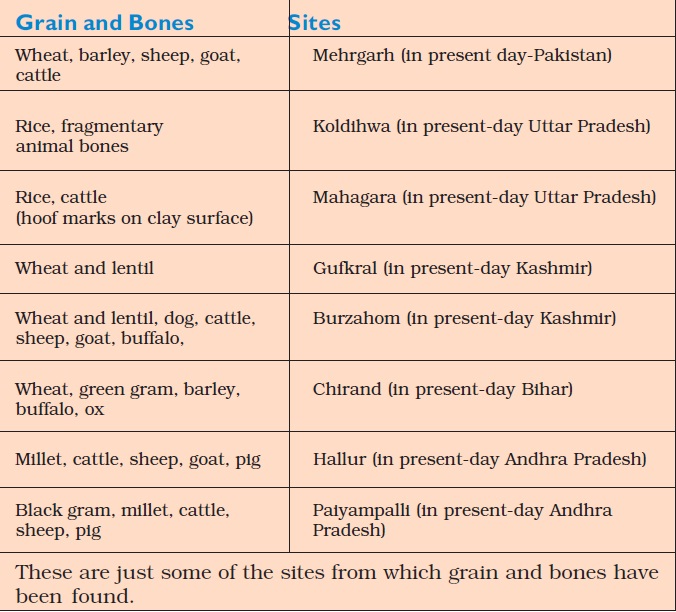 Towards a settled life

Archaeologists have found traces of huts or houses at some sites. For instance, in Burzahom (in present-day Kashmir) people built pit-houses, which were dug into the ground, with steps leading into them. These may have provided shelter in cold weather. Archaeologists have also found cooking hearths both inside and outside the huts, which suggests that, depending on the weather, people could cook food either indoors or outdoors.

Stone tools have been found from many sites as well. Many of these are different from the earlier Palaeolithic tools and that is why they are called Neolithic. These include tools that were polished to give a fine cutting edge, and mortars and pestles used for grinding grain and other plant produce. Mortars and pestles are used for grinding grain even today, several thousand years later. At the same time, tools of the Palaeolithic types continued to be made and used, and remember, some tools were also made of bone. 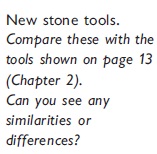 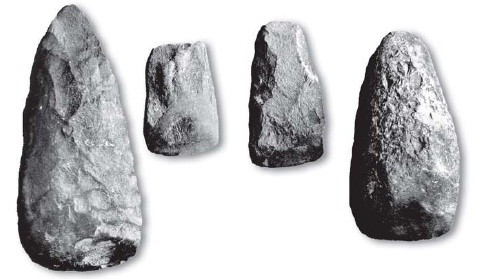 Many kinds of earthen pots have also been found. These were sometimes decorated, and were used for storing things. People began using pots for cooking food, especially grains like rice, wheat 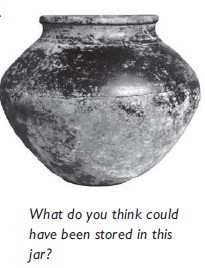 and lentils that now became an important part of the diet. Besides, they began weaving cloth, using different kinds of materials, for example cotton, that could now be grown.

Did things change everywhere and all at once? Not quite. In many areas, men and women still continued to hunt and gather food, and elsewhere people adopted farming and herding slowly, over several thousand years. Besides, in some cases people tried to combine these activities, doing different things during different seasons.

What about other customs and practices?

Archaeology does not tell us directly about these. Scholars have studied the lives of present-day farmers who practise simple agriculture. They have also studied the lives of herders. Many of these farmers and herders live in groups called tribes. Scholars find that they follow certain customs and practices that may have existed earlier as well.

Usually two to three generations live together in small settlements or villages. Most families are related to one another and groups of such families form a tribe.

Make a list of all the activities performed by men in tribal societies.

What do women do?

Are there any activities that are done by both men and women?

A closer look — (a) Living and dying in Mehrgarh

Find Mehrgarh on Map 2 (page14). This site is located in a fertile plain, near the Bolan Pass, which is one of the most important routes into Iran. Mehrgarh was probably one of the places where women and men learnt to grow barley and wheat, and rear sheep and goats for the first time in this area. It is one of the earliest villages that we know about. 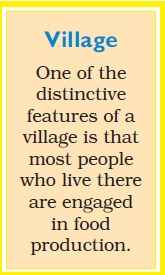 Archaeologists who excavated the site found evidence of many kinds of animal bones from the earliest levels. These included bones of wild animals such as the deer and pig. In later levels, they found more bones of sheep and goat, and in still later levels, cattle bones are most common, suggesting that this was the animal that was generally kept by the people.

When archaeologists are digging at an excavation site, how do they know which level is earlier and which is later?

Look at the illustration.

Suppose people first start living on flat land (layer 4). Over the years, the surface will gradually rise, because people discard waste material, and generally stay and rebuild houses in the same place. After hundreds of years, this leads to the formation of a mound. So, when this mound is dug up, what is found from the upper layers of the mound is generally from a later time than what is found from the lower layers of the mound, which are older.

These upper and lower layers are often referred to as levels.

Look at layers 2 and 3. Which do you think is the earlier level?

Other finds at Mehrgarh include remains of 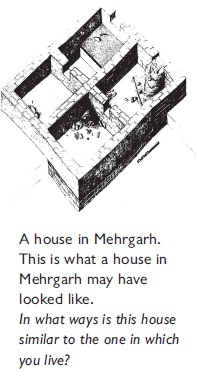 square or rectangular houses. Each house had four or more compartments, some of which may have been used for storage.

When people die, their relatives and friends generally pay respect to them. People look after them, perhaps in the belief that there is some form of life after death. Burial is one such arrangement. Several burial sites have been found at Mehrgarh. In one instance, the dead person was buried with goats, which were probably meant to serve as food in the next world. 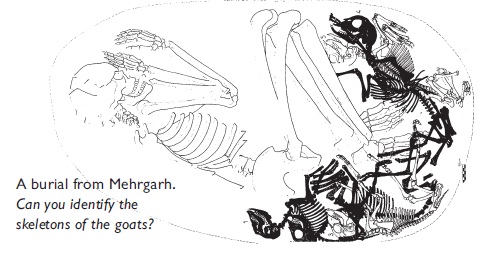 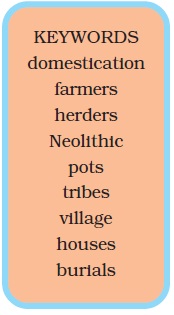 Find Daojali Hading on Map 2 (page14). This is a site on the hills near the Brahmaputra Valley, close to routes leading into China and Myanmar. Here stone tools, including mortars and pestles, have been found. These indicate that people were probably growing grain and preparing food from it. Other finds include jadeite, a stone that may have been brought from China. Also common are finds of tools made of fossil wood (ancient wood that has hardened into stone), and pottery.

Find Turkey in your atlas. One of the most famous Neolithic sites, Catal Huyuk, was found in Turkey. Several things were brought from great distances —flint from Syria, cowries from the Red Sea, shells from the Mediterranean Sea — and used in the settlement. Remember, there were no carts — most things would have been carried on the backs of pack animals such as cattle or by people.

What do you think cowries and shells would have been used for?

You are in charge of a small plot of land and have to decide what food crops to grow. What are the plants you would choose? Where would you get the seeds from? How would you plant them? How would you look after your plants? And when would they be ready for harvesting? 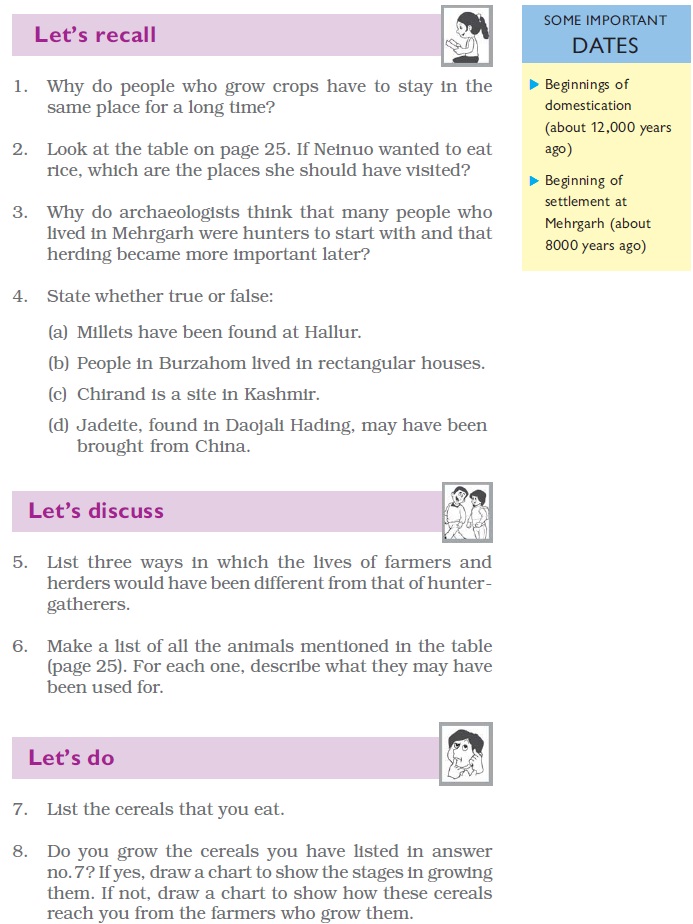