Class VI NCERT Social Studies Text Book Chapter 4 In the Earliest Cities is given below. 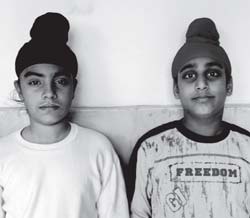 Jaspal and Harpreet were playing cricket in the lane outside their home when they noticed the people who were admiring the dilapidated old building that the children called the haunted house.

“Look at the architecture!” said one of the men.

“Have you seen the fine wood carving?” asked one of the women.

“We must write to the Minister so that she makes arrangements to repair and preserve this beautiful house.” Why, they wondered, would anybody be interested in the old, run down house?

The story of Harappa

Very often, old buildings have a story to tell. Nearly a hundred and fifty years ago, when railway lines were being laid down for the first time in the Punjab, engineers stumbled upon the site of Harappa in present-day Pakistan. To them, it seemed like a mound that was a rich source of ready made, high quality bricks. So they carried off thousands of bricks from the walls of the old buildings of the city to build railway lines. Many buildings were completely destroyed.

Then, about eighty years ago, archaeologists found the site, and realised that this was one of the oldest cities in the subcontinent. As this was the first city to be discovered, all other sites from where similar buildings (and other things) were found were described as Harappan. These cities developed about 4700 years ago.

Very often, old buildings are pulled down to make way for new construction. Do you think it is important to preserve old buildings?

What was special about these cities? 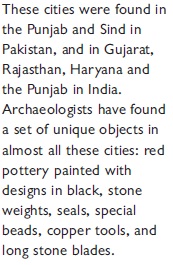 Many of these cities were divided into two or more parts. Usually, the part to the west was smaller but higher. Archaeologists describe this as the citadel. Generally, the part to the east was larger but lower. This is called the lower town. Very often walls of baked brick were built around each part. The bricks were so well made that they have lasted for thousands of years. The bricks were laid in an interlocking pattern and that made the walls strong.

In some cities, special 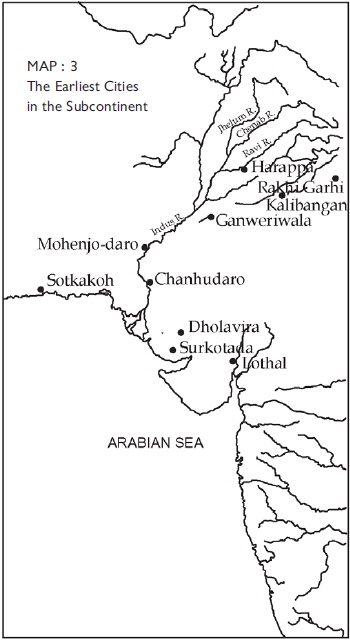 buildings were constructed on the citadel. For example, in Mohenjodaro, a very special tank, which archaeologists call the Great Bath, was built in this area. This was lined with bricks, coated with plaster, and made water-tight with a layer of natural tar. There were steps
leading down to it from two sides, while there were rooms on all sides. Water was probably brought in from a well, and drained out after use. Perhaps
important people took a dip in this tank on special occasions.

Other cities, such as Kalibangan and Lothal had fire altars, where sacrifices may have been performed. And some cities like Mohenjodaro, Harappa, and Lothal had elaborate store houses. 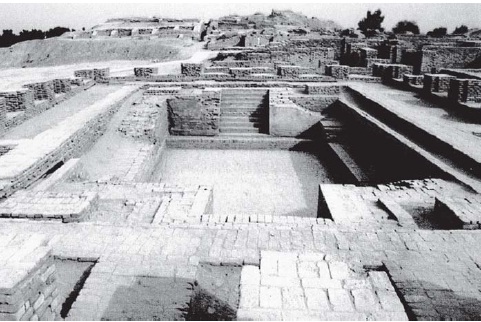 Generally, houses were either one or two storeys high, with rooms built around a courtyard. Most houses had a separate bathing area, and some had wells to supply water. 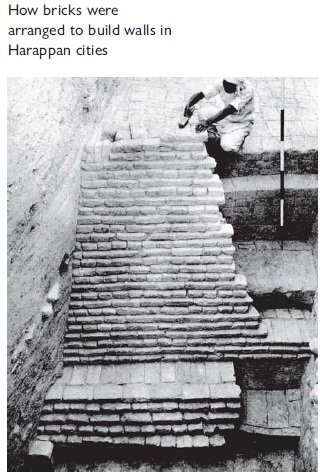 Many of these cities had covered drains. Notice how carefully these were laid out, in straight lines. Although you cannot see it, each drain had a gentle slope so that water could flow through it. Very often, drains in houses were connected to those on the streets and smaller drains led into bigger ones. As the drains were covered, inspection holes were provided at intervals to clean them. All three — houses, drains and streets — were probably planned and built at the same time.

List at least two differences between the houses described here and those that you studied about in Chapter 3.

Life in the city

A Harappan city was a very busy place. There were people who planned the construction of special buildings in the city. These were probably the rulers. It is likely that the rulers sent people to distant lands to get metal, precious stones, and other things that they wanted. They may have kept the most valuable objects, such as ornaments of gold and silver, or beautiful beads, for themselves. And there were scribes, people who knew how to write, who helped prepare the seals, and perhaps wrote on other materials that have not survived.

Besides, there were men and women, crafts persons, making all kinds of things
— either in their own homes, or in special workshops. People were travelling to distant lands or returning with raw materials and, perhaps, stories. Many terracotta toys have been found and a long time ago children must have played with these.

Make a list of the people who lived in the city. 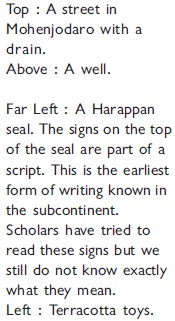 Were any of these people listed as living in villages such as Mehrgarh?

New crafts in the city

Perhaps the most striking finds are those of beads, weights, and blades.

The Harappans also made seals out of stone. These are generally rectangular (See illustration on page 35) and usually have an animal carved on them.

The Harappans also made pots with beautiful black designs, such as the one shown on page 6.

Was metal used in the villages 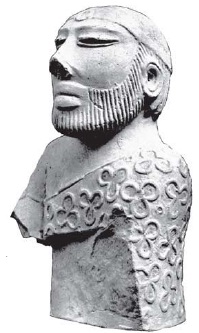 you learnt about in Chapter 3?

Was stone used to make weights?

Cotton was probably grown at Mehrgarh from about 7000 years ago. Actual pieces of cloth were found attached to the lid of a silver vase and
some copper objects at Mohenjodaro. Archaeologists have also found spindle whorls,

Unlike stone or shell, that are found naturally, 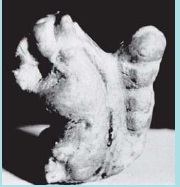 faience is a material that is artificially produced. A gum was used to shape sand or powdered quartz into an object. The objects were then glazed, resulting in a shiny, glassy surface. The colours of the glaze were usually blue or sea green.

made of terracotta and faience. These were used to spin thread.

Many of the things that were produced were probably the work of specialists. A specialist is a person who is trained to do only one kind of work, for example, cutting stone, or polishing beads, or carving seals. Look at the illustration (page 36) and see how well the face is carved and how carefully the beard is shown. This must have been the work of an expert crafts person.

In search of raw materials

Raw materials are substances that are either found naturally (such as wood, or ores of metals) or produced by farmers or herders. These are then processed to produce finished goods. For example, cotton, produced by farmers, is a raw material that may be processed to make cloth. While some of the raw materials that the Harappans used were available locally, many items such as copper, tin, gold, silver and precious stones had to be brought from distant places.

The Harappans probably got copper from 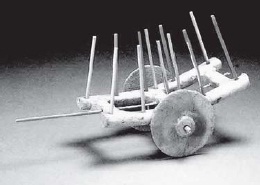 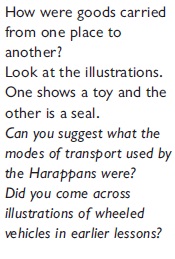 Food for people in the cities

While many people lived in the cities, others living in the countryside grew crops and reared animals. These farmers and herders supplied food to crafts persons, scribes and rulers in the cities. We know from remains of plants that the Harappans grew wheat, barley, pulses, peas, rice, sesame, linseed
and mustard.

A new tool, the plough, was used to dig the earth for turning the soil and planting seeds. While real ploughs, which were probably made of wood, have not survived, toy models have been found. As this region does not receive heavy rainfall, some form of irrigation may have been used. This means
that water was stored and supplied to the fields when the

plants were growing. The Harappans reared cattle, sheep, goat and buffalo. Water and pastures were available around settlements. However, in the dry summer months large herds of animals were probably taken to greater distances in search of grass and water. They also collected fruits like ber, caught fish and hunted wild animals like the antelope.

The city of Dholavira was located on Khadir Beyt in the Rann of Kutch, where there was fresh water and fertile soil. Unlike some of the other Harappan cities, which were divided into two parts, Dholavira was divided into three parts, and each part was surrounded with massive stone walls, with entrances through gateways. There was also a large open area in the settlement, where public ceremonies could be held. Other finds include large letters of the Harappan script that were carved out of white stone and perhaps inlaid in wood. This is a unique find as generally Harappan writing has been found on small objects such as seals.

The city of Lothal stood beside a tributary of 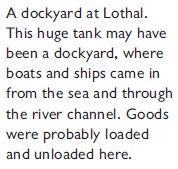 the Sabarmati, in Gujarat, close to the Gulf of Khambat. It was situated near areas where raw materials such as semi-precious stones were easily available. This was an important centre for making objects out of stone, shell and metal. There was also a store house in the city. Many seals and sealings (the impression of seals on clay) were found in this storehouse.

A building that was found here was probably a workshop for making beads: pieces of stone, half made beads, tools for bead making, and finished beads have all been found here. 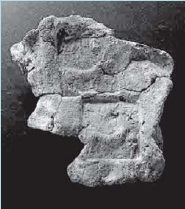 Seals may have been used to stamp bags or packets containing goods that were sent from one place to another. After a bag was closed or tied, a layer of wet clay was applied on the knot, and the seal was pressed on it. The impression of the seal is known as a sealing.

If the sealing was intact, one could be sure that the goods had arrived safely.

Seals are used even today. Find out what they are used for.

The mystery of the end

Around 3900 years ago we find the beginning of a major change. People stopped living in many of the cities. Writing, seals and weights were no longer used. Raw materials brought from long distances became rare. In Mohenjodaro, we find that garbage piled up on the streets, the drainage system broke down, and new, less impressive houses were built, even over the streets.

Why did all this happen? We are not sure. Some scholars suggest that the rivers dried up. Others suggest that there was deforestation. This could have happened because fuel was required for baking bricks, and for smelting copper ores. Besides, grazing by large herds of cattle, sheep and goat may have destroyed the green cover. In some areas there were floods. But none of these reasons can explain the end of all the cities. Flooding, or a river drying up would have had an effect in only some areas.

It appears as if the rulers lost control. In any case, the effects of the change are quite clear. Sites in Sind and west Punjab (present-day Pakistan) were abandoned, while many people moved into newer, smaller settlements to the east and the south.

New cities emerged about 1400 years later. You will read about them in Chapters 6 and 9.

Find Egypt in your atlas. Most of Egypt is a dry desert, except for the lands along the river Nile.

Around 5000 years ago, kings ruled over Egypt. These kings sent armies to distant lands to get 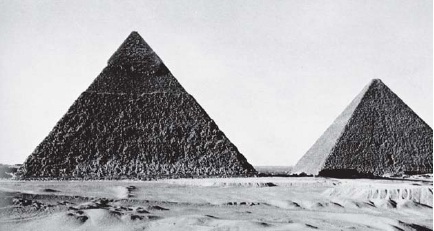 When they died, the bodies of kings were preserved and buried in these pyramids. These carefully preserved bodies are known as ‘mummies’. A large number of objects were also buried with them. These included food and drink, clothes, ornaments, utensils, musical instruments, weapons and animals. Sometimes even serving men and women were buried with the rulers. These are amongst the most elaborate burials known in world history.

Do you think kings would have needed these things after death? 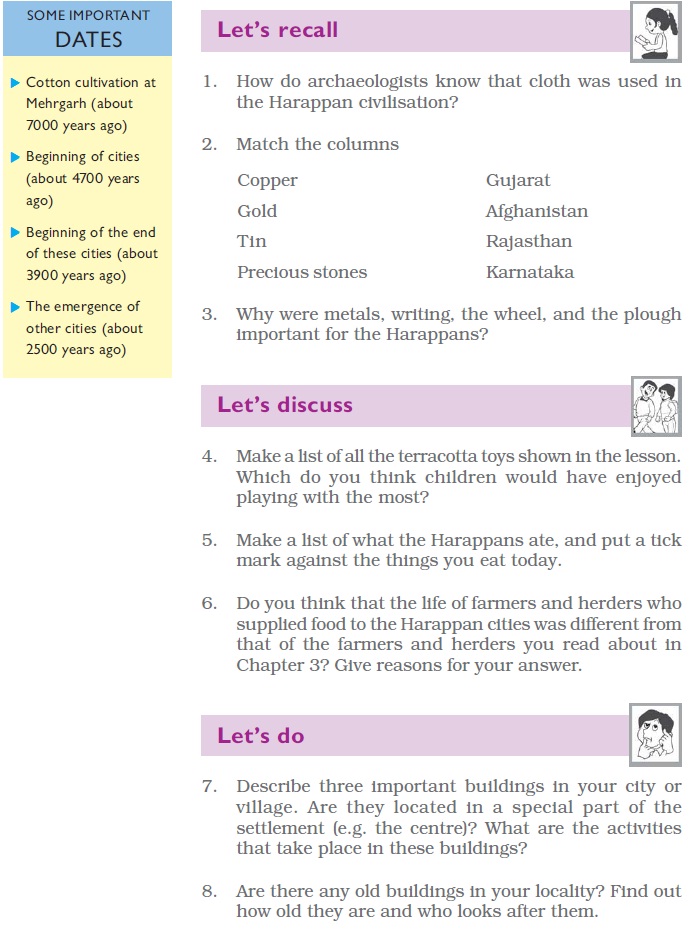