Class VI NCERT Social Studies Text Book Chapter 8 Ashoka, The Emperor Who Gave Up War is given below. 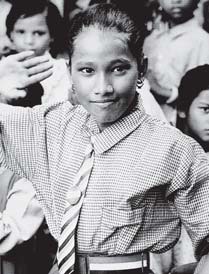 Roshan clutched the crisp notes that her grandfather had given her on her birthday. While she badly wanted to buy a new cassette, she also wanted to just see and feel the brand new notes. It was then that she noticed that all of them had a smiling face of Gandhiji printed on the right, and a tiny set of lions on the left. What were the lions there for, she wondered.

A very big kingdom = an empire

The lions that we see on our notes and coins have a long history. They were carved in stone, and placed on top of a massive stone pillar at Sarnath (about which you read in Chapter 7).

Ashoka was one of the greatest rulers known to history and on his instructions inscriptions were carved on pillars, as well as on rock surfaces. Before we find out what was written in these inscriptions, let us see why his kingdom was called an empire.

The empire that Ashoka ruled was founded by his grandfather, Chandragupta Maurya, more than 2300 years ago. Chandragupta was supported by a wise man named Chanakya or Kautilya. Many of Chanakya’s ideas were written down in a book called the Arthashastra.

When members of the same family become rulers one after another, the family is often called a dynasty. The Mauryas were a dynasty with three important rulers — Chandragupta, his son Bindusara, and Bindusara’s son, Ashoka. 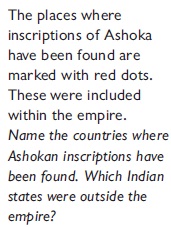 There were several cities in the empire (marked with black dots on the map). These included the capital Pataliputra, Taxila, and Ujjain. Taxila was a gateway to the northwest, including Central Asia, while Ujjain lay on the route from north to south India. Merchants, officials and crafts persons probably lived in these cities.

In other areas there were villages of farmers and herders. In some areas such as central India, there were forests where people gathered forest produce and hunted animals for food. People in different parts of the empire spoke different 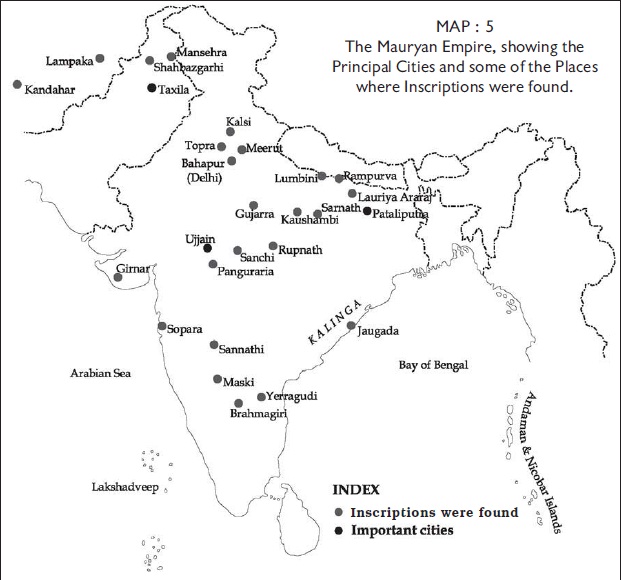 How are empires different from kingdoms?

As the empire was so large, different parts were ruled differently. The area around Pataliputra was under the direct control of the emperor. This meant that officials were appointed to collect taxes from farmers, herders, crafts persons and traders, who lived in villages and towns in the area. Officials also punished those who disobeyed the ruler’s orders. Many of these officials were given salaries. Messengers went to and fro, and spies kept a watch on the officials. And of course the emperor supervised them all, with the help of members of the royal family, and senior ministers.

There were other areas or provinces. Each of these was ruled from a provincial capital such as Taxila or Ujjain. Although there was some amount of control from Pataliputra, and royal princes were often sent as governors, local customs and rules were probably followed.

Besides, there were vast areas between these centres. Here the Mauryas tried to control roads and rivers, which were important for transport, and to collect whatever resources were available as tax and tribute. For example, the Arthashastra tells us that the north-west was important for blankets, and south India for its gold and precious stones. It is possible that these resources were collected as tribute.

Unlike taxes, which were collected on a regular basis, tribute was collected as and when it was possible from people who gave a variety of things, more or less willingly.

There were also the forested regions. People living in these areas were more or less independent, but may have been expected to
provide elephants, timber, honey and wax to Mauryan officials.

The emperor and the capital city

Megasthenes was an ambassador who was sent to the court of Chandragupta by the Greek ruler of West Asia named Seleucus Nicator.

Megasthenes wrote an account about what he saw. Here is a part of his description:

“The occasions on which the emperor appears in public are celebrated with grand royal processions. He is carried in a golden palanquin. His guards ride elephants decorated with gold and silver. Some of the guards carry trees on which live birds, including a flock of trained parrots, circle about the head of the emperor. The king is normally surrounded by armed women. He is afraid that someone may try to kill him. He has special servants to taste the food before he eats.

He never sleeps in the same bedroom for two nights.”

And about Pataliputra (modern Patna) he wrote:

“This is a large and beautiful city. It is surrounded by a massive wall. It has 570 towers and 64 gates. The houses, of two and three storeys, are built of wood and mud brick. The king’s palace is also of wood, and decorated with stone carvings. It is surrounded with gardens and enclosures for keeping birds.”

Why do you think the king had special servants to taste the food he ate?

In what ways was Pataliputra different from Mohenjodaro? (hint: see Chapter 4)

The most famous Mauryan ruler was Ashoka. He was the first ruler who tried to take his message to the people through inscriptions. Most of Ashoka’s inscriptions were in Prakrit and were written in the Brahmi script.

Kalinga is the ancient name of coastal Orissa (see Map 5, page 76). Ashoka fought a war to conquer Kalinga. However, he was so horrified when he saw the violence and bloodshed that he decided not to fight any more wars. He is the only king in the history of the world who gave up conquest after winning a war.

This is what Ashoka declared in one of his inscriptions:

This filled me with sorrow. Why?

Whenever an independent land is conquered, lakhs of people die, and many are taken prisoner. Brahmins and monks also die.

People who are kind to their relatives and friends, to their slaves and servants die, or lose their loved ones.

That is why I am sad, and have decided to observe dhamma, and to teach others about it as well.

I believe that winning people over through dhamma is much better than conquering them through force.

I am inscribing this message for the future, so that my son and grandson after me should not think about war.

Instead, they should try to think about how to spread dhamma.”

How did the Kalinga war bring about a change in Ashoka’s attitude towards war?

(‘Dhamma’ is the Prakrit word for the Sanskrit term ‘Dharma’).

What was Ashoka’s dhamma?

Ashoka’s dhamma did not involve worship of a god, or performance of a sacrifice. He felt that just as a father tries to teach his children, he had a duty to instruct his subjects. He was also inspired by the teachings of the Buddha (Chapter 7). 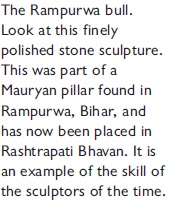 There were a number of problems that troubled him. People in the empire followed different religions, and this sometimes led to conflict. Animals were sacrificed. Slaves and servants were ill treated. Besides, there were quarrels in families and amongst neighbours. Ashoka felt it was his duty to solve these problems. So, he appointed officials, known as the dhamma mahamatta who went from place to place teaching people about dhamma. Besides, Ashoka got his messages inscribed on rocks and pillars, instructing his officials to read his message to those who could not read it themselves. 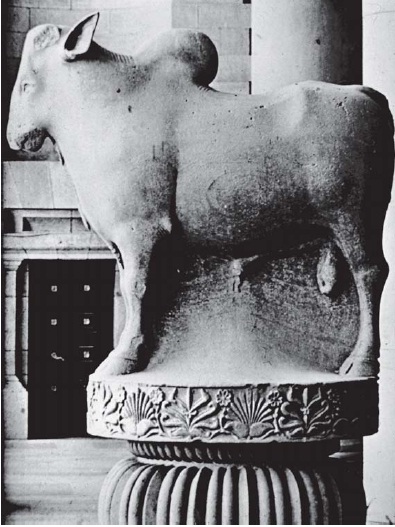 Ashoka also sent messengers to spread ideas about dhamma to other lands, such as Syria, Egypt, Greece and Sri Lanka (see Map 6, pages 84-85). He built roads, dug wells, and built rest houses. Besides, he arranged for medical treatment for both human beings and animals.

Ashoka’s messages to his subjects:

“People perform a variety of rituals when they fall ill, when their children get married, when children are born, or when they go on a journey.

These rituals are not useful.

These are: being gentle with slaves and servants.

Treating all creatures with compassion.

Giving gifts to brahmins and monks.”

“It is both wrong to praise one’s own religion or criticise another’s.

Each one should respect the other’s religion.

Therefore, one should try to understand the main 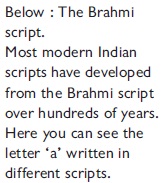 ideas of another’s religion, and respect it.” Pandit Jawaharlal Nehru, the first Prime Minister of India, wrote: “His edicts (instructions) still speak to us in a language we can understand and we can still learn much from them.”

Identify the parts of Ashoka’s message that you think are relevant today.

Somewhat before the time of the Mauryan empire, about 2400 years ago, emperors in China began building the Great Wall. 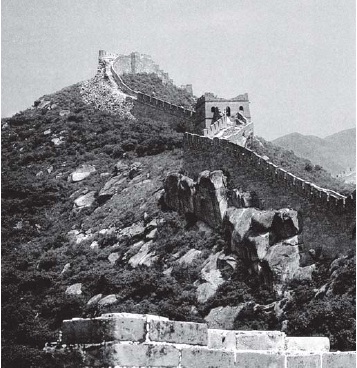 It was meant to protect the northern frontier of the empire from pastoral people. Additions to the wall were made over a period of 2000 years because the frontiers of the empire kept shifting. The wall is about 6400
km long, and is made of stone and brick, with a road along the top. Several thousand people worked to build the wall. There are watch towers all along, at distances of about 100-200 m.

In what ways do you think Ashoka’s attitude toward neighbouring peoples was different from that of the Chinese emperors? 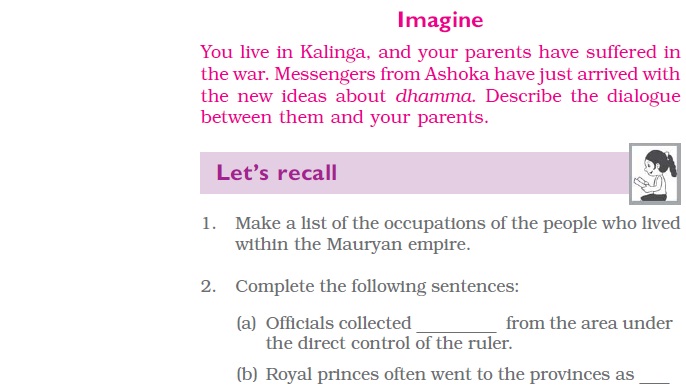 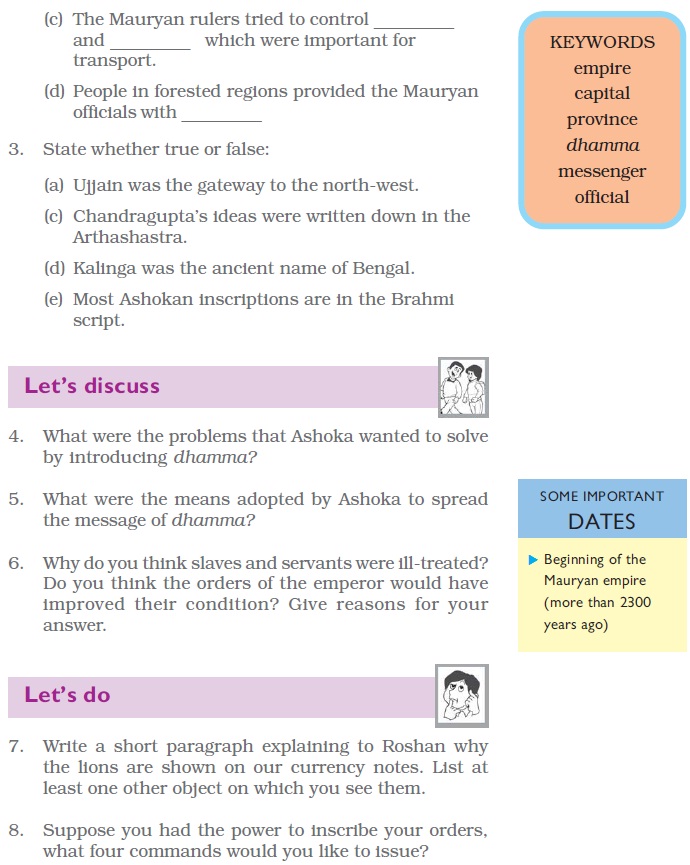 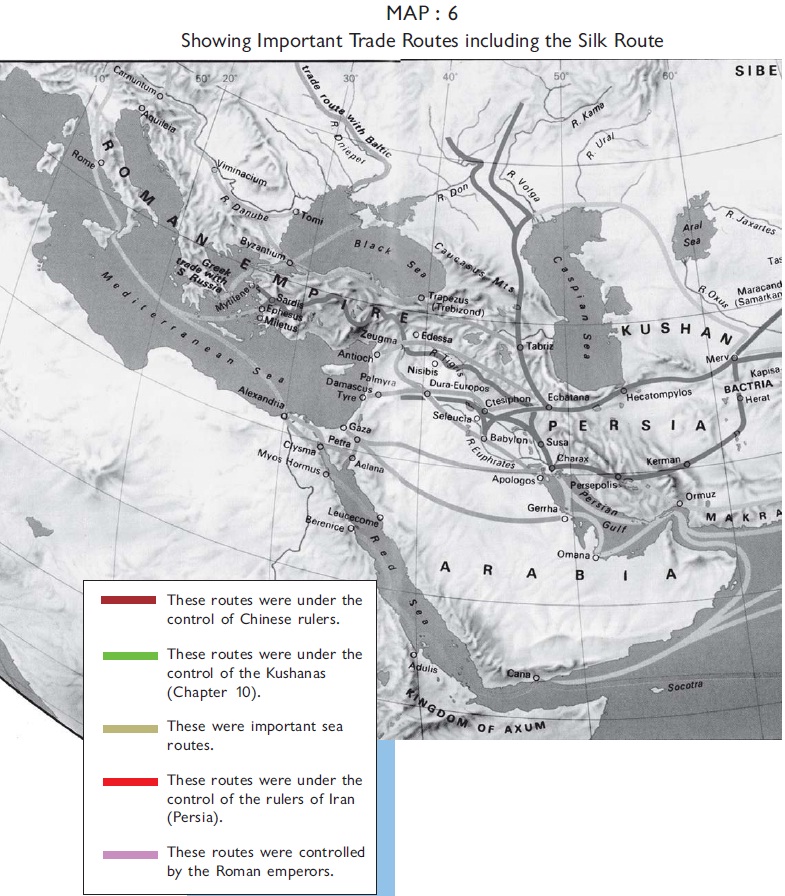 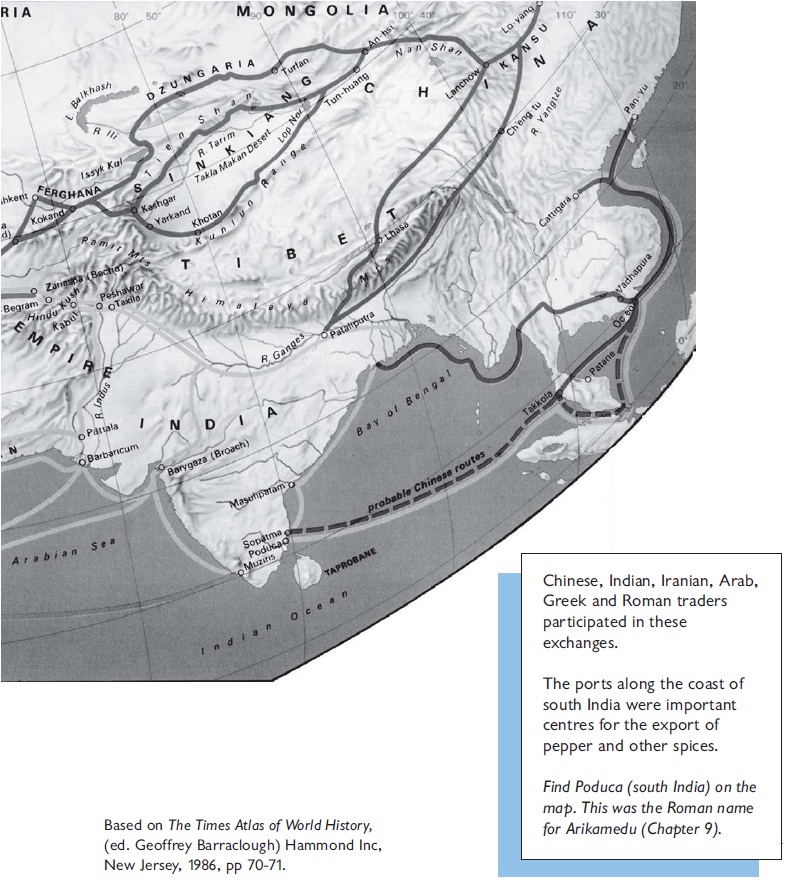 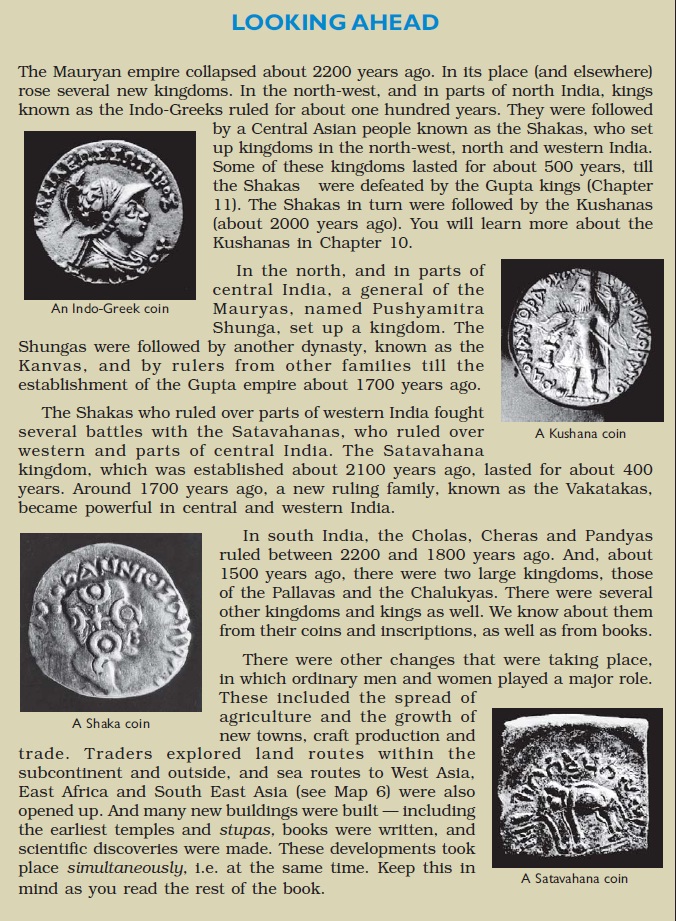