It is the branch of science which deals with the composition, structure and properties of matter.

Antoine Laurent Lavoisier is called the father of chemistry.

Anything which occupies some space and have some mass is called matter. It 15 made up of small particles which have space between them. The matter particles attract each other and are in a state of continuous monon. 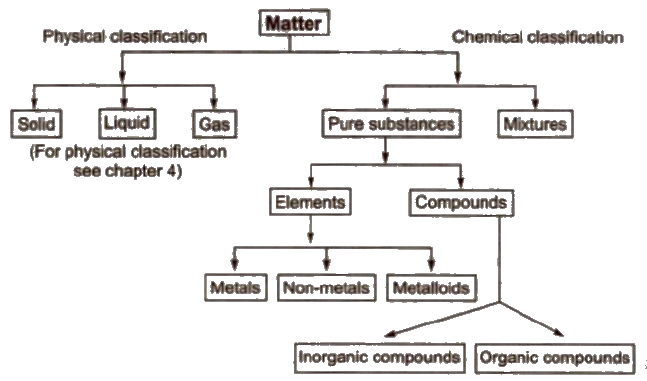 It is the simplest form of pure substance, which can neither be decomposed into nor built from simpler substances by ordinary physical and chemical methods. It contains only one kind of atoms. The number of elements known till date is 118.

[Hydrogen IS the most abundant element in the universe.

OXYgen (46.6%), a non-metal, is the most abundant element in the earth crust.

AI is the most abundant metal in the earth crust.

An element can be a metal, a non-metal or a metalloid.]

A symbol is an abbreviation or shortened form for the full name of an element. The present system of symbols was introduced by Berzelius.

Symbol and Latin Names for Some Elements 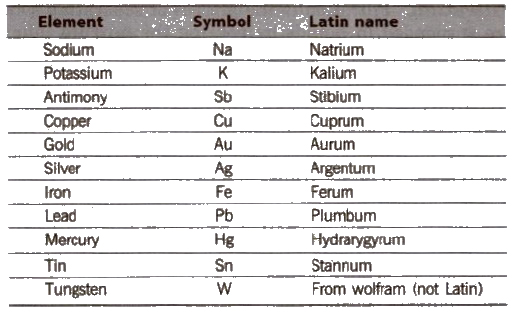 It is also the form of matter which can be formed by combining two or more elements in a definite ratio by mass. It can be decomposed into its constituent elements by suitable chemical methods, e.g., water (H2O) is made of hydrogen and oxygen in the ratio 1 : 8 by mass.

Compounds can be of two types :

(i) Inorganic compounds Previously, it was believed that these compounds are derived from non-living sources, like rocks and minerals. But these are infact the compounds of all the elements except hydrides of carbon (hydrocarbons) and their derivatives.

(ii) Organic compounds According to earlier scientists, these compounds are derived from living sources like plants and animals, or these remain buried under the earth (e.g., petroleum). According to modern concept, these are the hydrides of carbon and their derivatives.

These are made up of two or more pure substances. They can possess variable composition and can be separated into their components by some physical methods.

Common methods for the separation of mixtures are

(a) Filtration Filtration is the process of separating solids that are suspended in liquids by pouring the mixture into a filter funnel. As the liquid passes through the filter, the solid particles are held on the filter.

(b) Distillation Distillation is the process of heating a liquid to form vapours and then cooling the vapours to get back the liquid. This is a method by which a mixture containing volatile substances can be separated into Its components.

(c) Sublimation This is the process of conversion of a solid directly into vapours on heating. Substances showing this property are called sublimate, e.g., iodine, naphthalene, camphor. This method is used to separate a sublimate from non-sublimate substances.

(d) Crystallisation It is a process of separating solids having different solubilities in a particular solvent.

(f) Atmolysis Tills method is based upon rates of diffusion of gases and used for their separation from a gaseous mixture.

Atom is the smallest particle of an element which can take part in a chemical reaction. It mayor may not be capable of independent existence.

Molecule is the simplest particle of matter that has independent existence. It may be homoatomic e.g., H2, CI2, N2 (diatomic), O3 (triatomic) or heteroatomic, e.g., HCI, NH3, CH3 etc.

Physical Quantities and Their Measurements

To express the measurement of any physical quantity two things are considered:

Units are of two types:

(i) The basic or fundamental units are those of length (m), ass (kg), time (s), electric current (A), thermodynamic temperature (K), amount of substance (mol) and luminous intensity (cd).

(ii) Derived units are basically derived from the fundamental units, e.g., unit of density is derived from units of mass and volume.

The systems used for describing measurements of various physical quantities are

(a) CGS system It is based on centimetre, gram and second as the units of length, mass and time respectively.

(b) FPS system A British system which used foot(ft). pound (lb) and second (s) as the fundamental units of length, mass and time.

Base Physical Quantities and their Corresponding Basic Units

SUpplementary units It includes plane angle in radian and solid angle in steradian.

The SI units of some physical quantities are either too small or too large. To change the order of magnitude. these are expressed by using prefixes before the name of base units. The various prefixes are listed as

Often while calculating, there is a need to convert units from one system to other. The method used to accomplish this is called factor label method or unit factor method or dimensional analysis. 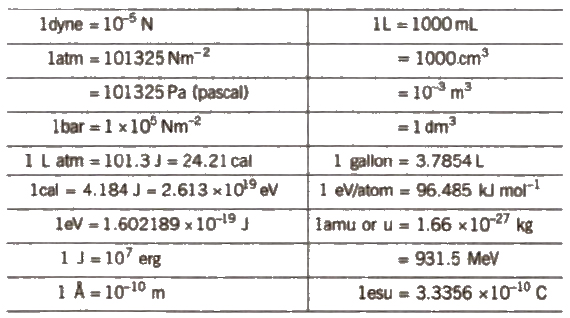 In such notation, all measurements (however large or small) are expressed as a number between 1.000 and 9.999 multiplied or divided by 10. In general as

Precision refers the closeness of the set of values obtained from identical measurements of a quantity. Precision is simply a measure of
reproducibility of an experiment.

Accuracy is a measure of the difference between the experimental value or the mean value of a set of measurements and the true value.

In physical measurements, accurate results are generally precise but precise results need not be accurate. In other words good precision does not assure good accuracy.

Significant figures are the meaningful digits in a measured or calculated quantity. It includes all those digits that are known with certainty plus one more which is uncertain or estimated.

Greater the number of significant figures in a measurement, smaller the uncertainty.

Rules for determining the number of significant figures are:

1. An digits are significant except zeros in the beginning of a number.

(Reported sum should have only one decimal point.)

Rounding Off the Numerical Results

The combination of elements to form compounds is governed by the following six basic laws:

According to this law, a chemical compound obtained by different sources always contains same percentage of each constituent element.

According to this law. if two elements can combine to form more than one compound. the masses of one element that combine with a fixed mass of the other element, are in the ratio of small whole numbers, e.g., in NH3 and N2H4, fixed mass of nitrogen requires hydrogen in the ratio 3 : 2.

Law of definite proportions, law of multiple proportions and law of reciprocal proportions do not hold good when same compound is obtained by using different isotopes of the same element. e.g H2O and D2O

It states that under similar conditions of temperature and pressure. whenever gases react together. the volumes of the reacting gases as well as products (if gases) bear a simple whole number ratio.

It states that equal volumes of all gases under the same conditions of temperature and pressure contain the same number of molecules.

This theory was based on laws of chemical combinations. It’s basic postulates are

1. All substances are made up of tiny. indivisible particles, called atoms.

2. In each element, the atoms are all alike and have the same mass. The atoms of different elements differ in mass.

3. Atoms can neither be created nor destroyed during any physical or chemical change.

4. Compounds or molecules result from combination of atoms in some simple numerical ratio.

A mole is defined as the amount of substance which contains same number of elementary particles (atoms, molecules or ions) as the number of atoms present in 12 g of carbon (C-12).

Standard number 6.023x 1023 is called Avogadro number in honour of Avogadro (he did not give this number) and is denoted by NA.

The volume occupied by one mole molecules of a gaseous substance is called molar volume or gram molecular volume.

Number of moles = amount of substance (in gram) / molar mass

The word average has been used in the above definition and is very significant because elements occur in nature as mixture of several isotopes. So. atomic mass can be computed as

In case of volatile chlorides. the atomic weight is calculated as

According to Dulong and Petit’s rule,

Atomic mass of an element expressed in gram is called its gram atomic mass or gram-atom or mole-atom.

It is the mass of a molecule, i.e., number of times a molecule is heavier than 1 / 12 th mass of C-12 atom. Molecular mass of a substance is an additive property and can be calculated by taking algebraic sum of atomic masses of all the atoms of different elements present in one molecule.

It is the mass of an element or a compound which would combine with or displace (by weight) 1 part of hydrogen or 8 parts of oxygen or 35.5 parts of chlorine

n factor for various compounds can be obtained as

(Number of ionisable H+ per molecule is the basicity of acid.)

(Number of ionisable OH– per molecule is the acidity of a base.)

(iii) In case of ions, 11 factor is equal to charge of that ion.

(iv) In redox titrations, 11 factor is equal to change in oxidation number.

The relative proportions in which the reactants react and the products are formed, is called stoichiometry (from the Greek word meaning ‘to measure an element’.)

Limiting reagent It is the reactant which is completely consumed during the reaction.

Excess reagent It is the reactant which is not completely consumed and remains unreacted during the reaction.

The actual yield of a product in any reaction is usually less than the theoretical yield because of the occurrence of certain side reactions.