Geometry has a long and rich history. The term ‘Geometry’ is the English equivalent of the Greek word ‘Geometron’. ‘Geo’ means Earth and ‘metron’

means Measurement. According to 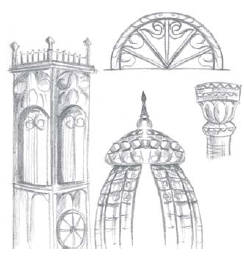 historians, the geometrical ideas shaped up in ancient times, probably due to the need in art, architecture and measurement. These include occasions when the boundaries of cultivated lands had to be marked without giving room for complaints. Construction of magnificent palaces, temples, lakes, dams and cities, art and architecture propped up these ideas. Even today geometrical ideas are reflected in all forms of art,

measurements, architecture, engineering, cloth designing etc. You observe and use different objects like boxes, tables, books, the tiffin box you carry to your school for lunch, the ball with which you play and so on. All such objects have different shapes. The ruler which you use, the pencil with which you write are straight. The pictures of a bangle, the one rupee coin or a ball appear round.

Here, you will learn some interesting facts that will help you know more about the shapes around you.

By a sharp tip of the pencil, mark a dot on the paper. Sharper the tip, thinner will be the dot. This almost invisible tiny dot will give you an idea of a point. 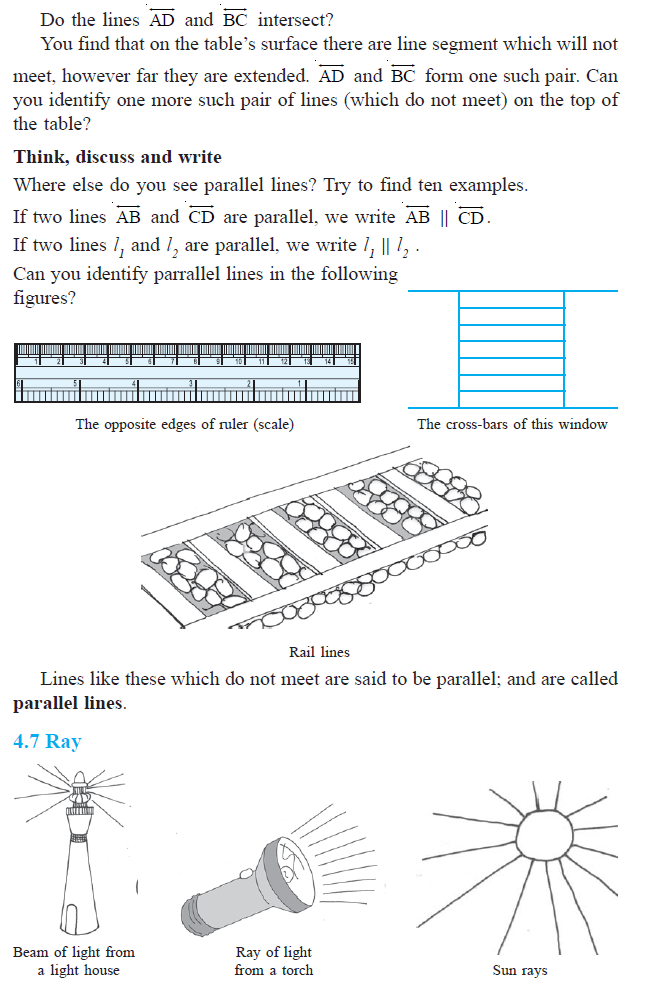 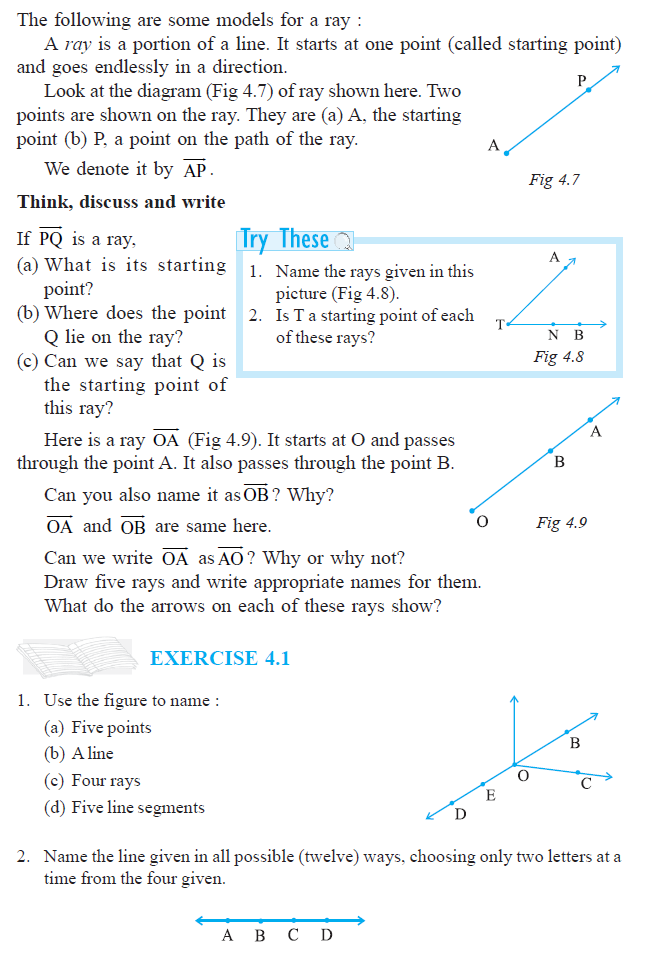 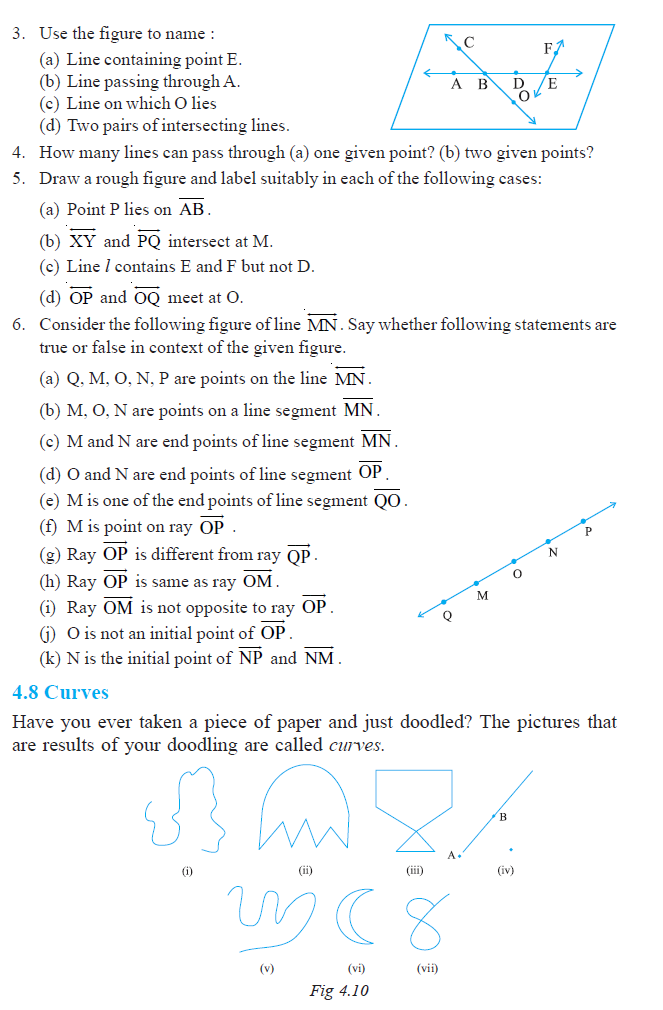 You can draw some of these drawings without lifting the pencil from the paper and without the use of a ruler. These are all curves (Fig 4.10).

‘Curve’ in everyday usage means “not straight”. In Mathematics, a curve can be straight like the one shown in fig 4.10 (iv).

Draw five more simple curves and five curves that are not simple. Consider these now (Fig 4.11).

What can you say? Are they closed? How does each one of them differ
from the other? (i), (ii), (iii) and (iv) are special because they are made up
entirely of line segments. They are called polygons.
So, a figure is a polygon if it is a simple closed figure made up entirely
of line segments. Draw ten differently shaped polygons. 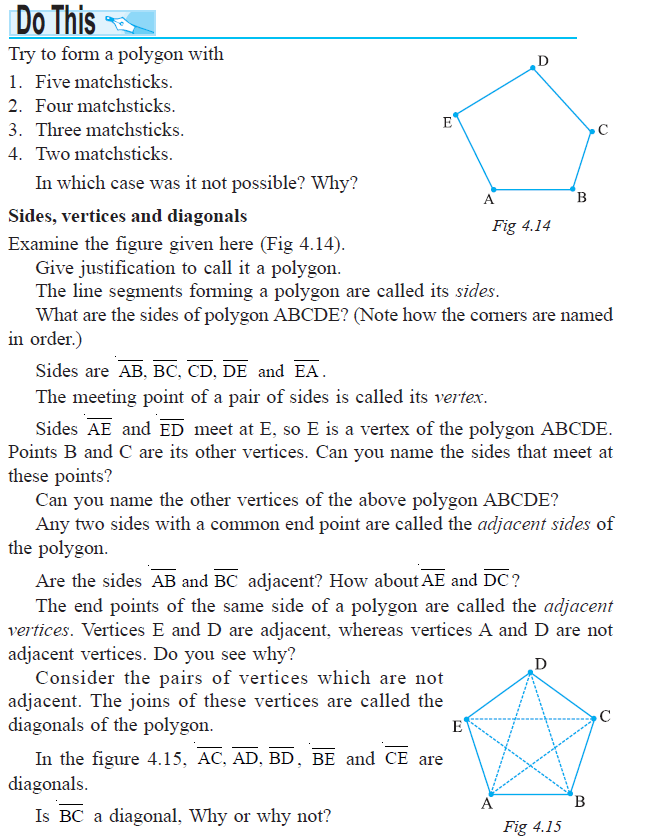 3. Draw any polygon and shade its interior.

4. Consider the given figure and answer the questions :

5. Illustrate, if possible, each one of the following with a rough diagram:

(a) A closed curve that is not a polygon.

(b) An open curve made up entirely of line segments.

(c) A polygon with two sides.

An angle is made up of two rays starting from a common end point. The two rays forming the angle are called the arms or sides of the angle.

The common end point is the vertex of the angle. 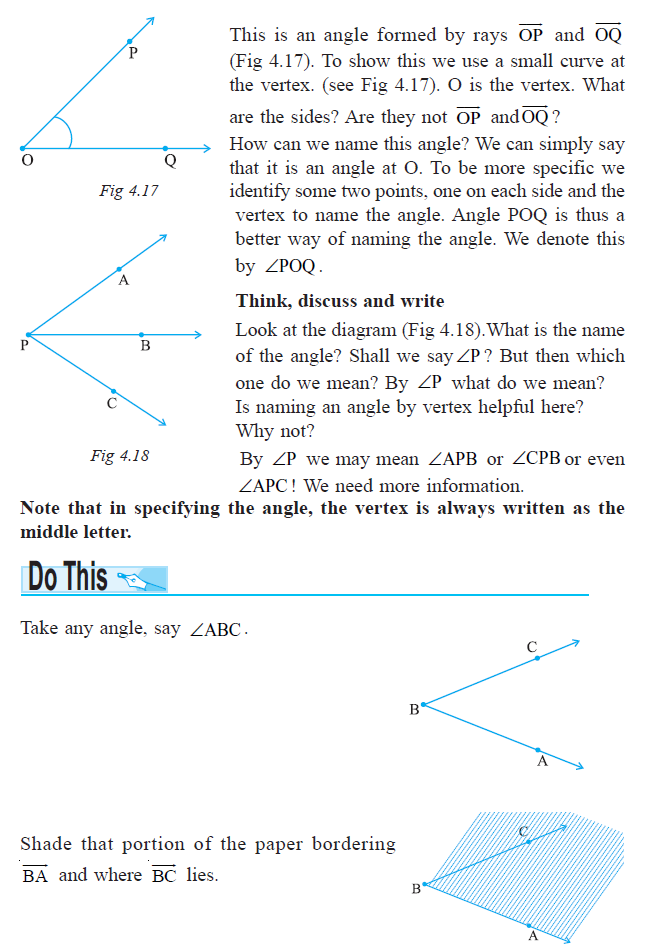 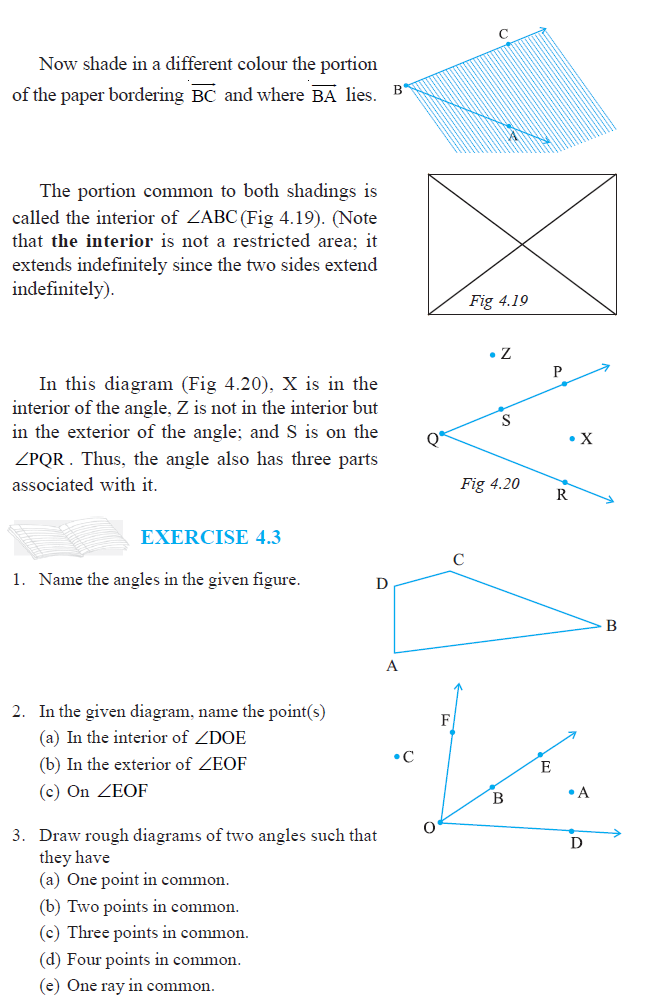 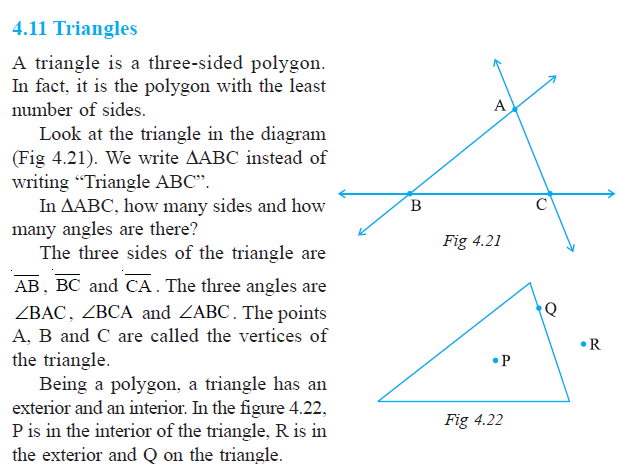 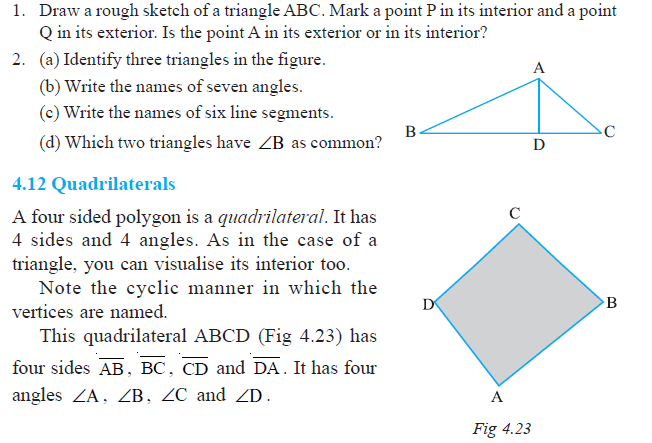 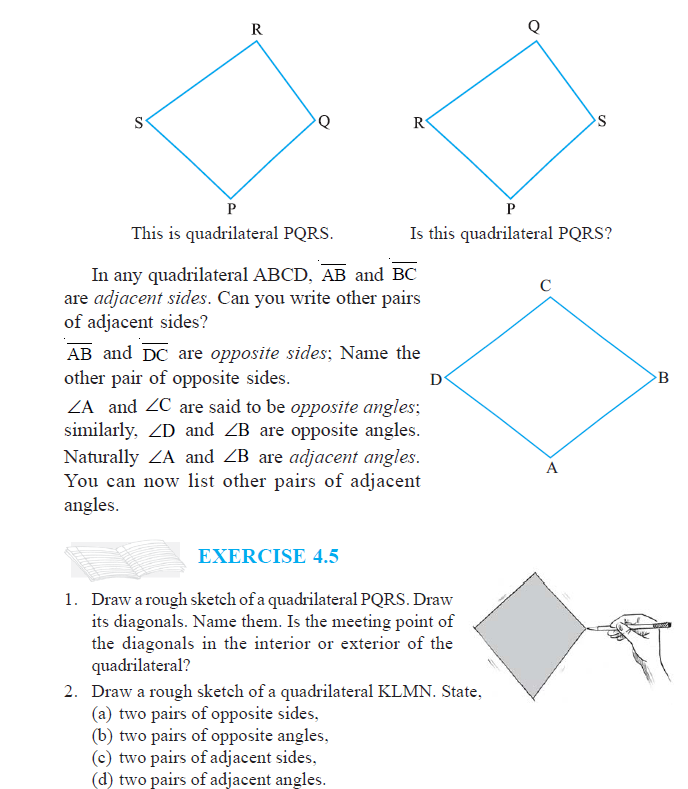 Use strips and fasteners to make a triangle and a quadrilateral. Try to push inward at any one vertex of the triangle. Do the same to the quadrilateral.

In our environment, you find many things that are round, a wheel, a bangle, a coin etc. We use the round shape in many ways. It is easier to roll a heavy steel tube than to drag it.

A circle is a simple closed curve which is not a polygon. It has some very special properties.

Take two sticks and a piece of rope. Drive one stick into the ground.

This is the centre of the proposed

circle. Form two loops, one at each end of the rope. Place one loop around the stick at the centre. Put the other around the other stick. Keep the sticks vertical to the ground. Keep the rope taut all the time and trace the path. You get a circle. Naturally every point on the circle is at equal distance from the centre.

Parts of a circle 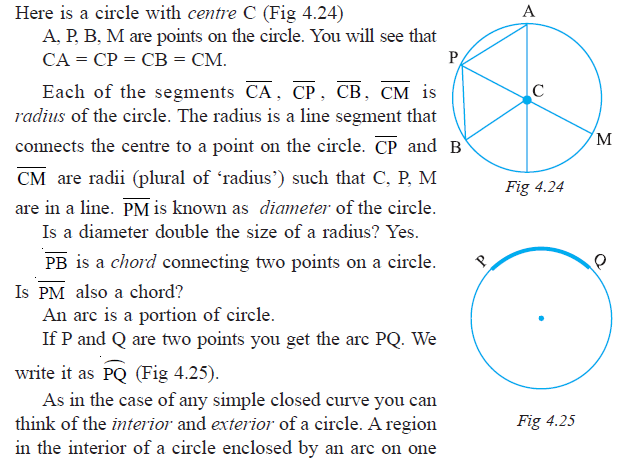 side and a pair of radii on the other two sides is called a sector (Fig 4.26).

A region in the interior of a circle enclosed by a chord and an arc is called a segment of the circle. 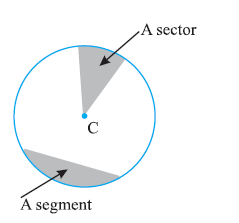 What does this length denote?

The distance around a circle is its circumference. 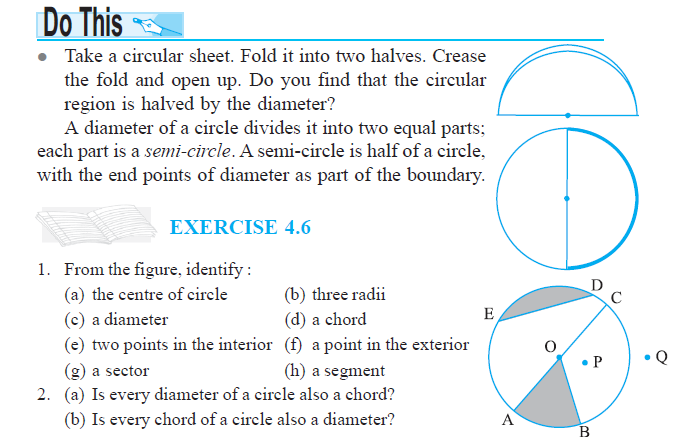 3. Draw any circle and mark

(e) a segment (f) a point in its interior

(a) Two diameters of a circle will necessarily intersect.

(b) The centre of a circle is always in its interior.

1. A point determines a location. It is usually denoted by a capital letter.

5. Two lines in a plane are said to be parallel if they do not meet.

6. A ray is a portion of line starting at a point and going in one direction endlessly.

7. Any drawing (straight or non-straight) done without lifting the pencil may be called a curve. In this sense, a line is also a curve.

8. A simple curve is one that does not cross itself.

10. A polygon is a simple closed curve made up of line segments. Here,

(i) The line segments are the sides of the polygon.

(ii) Any two sides with a common end point are adjacent sides.

(iii) The meeting point of a pair of sides is called a vertex.

(iv) The end points of the same side are adjacent vertices.

(v) The join of any two non-adjacent vertices is a diagonal.

11. An angle is made up of two rays starting from a common end point.

A chord of a circle is a line segment joining any two points on the circle. A diameter is a chord passing through the centre of the circle.

A sector is the region in the interior of a circle enclosed by an arc on one side and a pair of radii on the other two sides.

A segment of a circle is a region in the interior of the circle enclosed by an arc and a chord.

The diameter of a circle divides it into two semi-circles.