All the shapes we see around us are formed using curves or lines. We can see corners, edges, planes, open curves and closed curves in our surroundings. We organise them into line segments, angles, triangles, polygons and circles. We find that they have different sizes and measures. Let us now try to develop tools to compare their sizes.

To compare any two line segments, we find a relation between their lengths. This can be done in several ways. 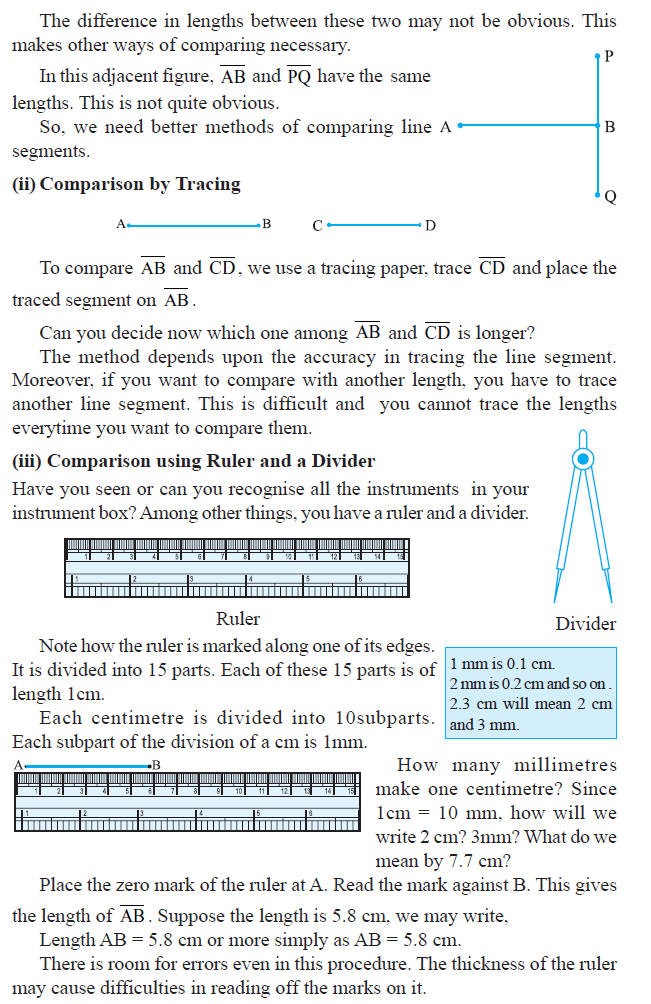 2. What kind of errors can occur if viewing the mark on the ruler is not proper? How can one avoid it? 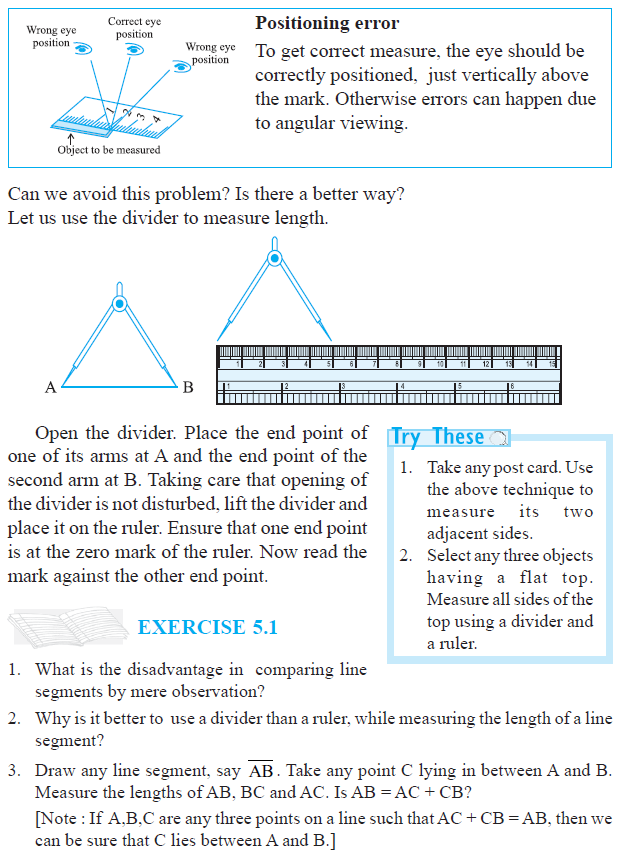 7. Draw five triangles and measure their sides. Check in each case, if the sum of the lengths of any two sides is always less than the third side.

You have heard of directions in Geography. We know that China is to the north of India, Sri Lanka is to the south. We also know that Sun rises in the east and sets in the west. There are four main directions. They are North (N), South (S), East (E) and West (W).

Do you know which direction is opposite to north?

Which direction is opposite to west?

Just recollect what you know already. We now use this knowledge to learn a few properties about angles. 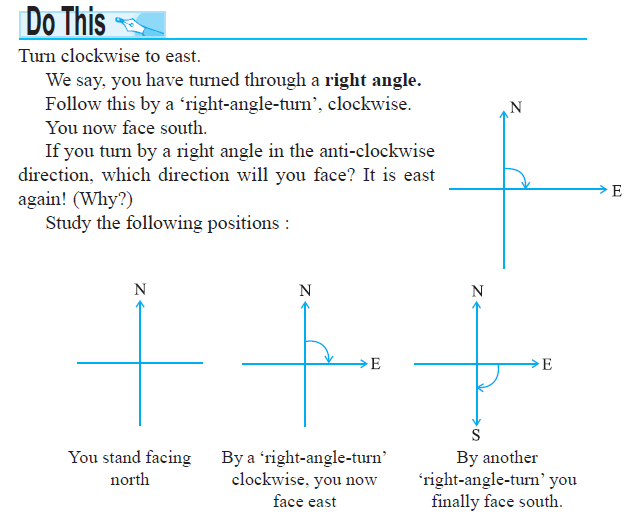 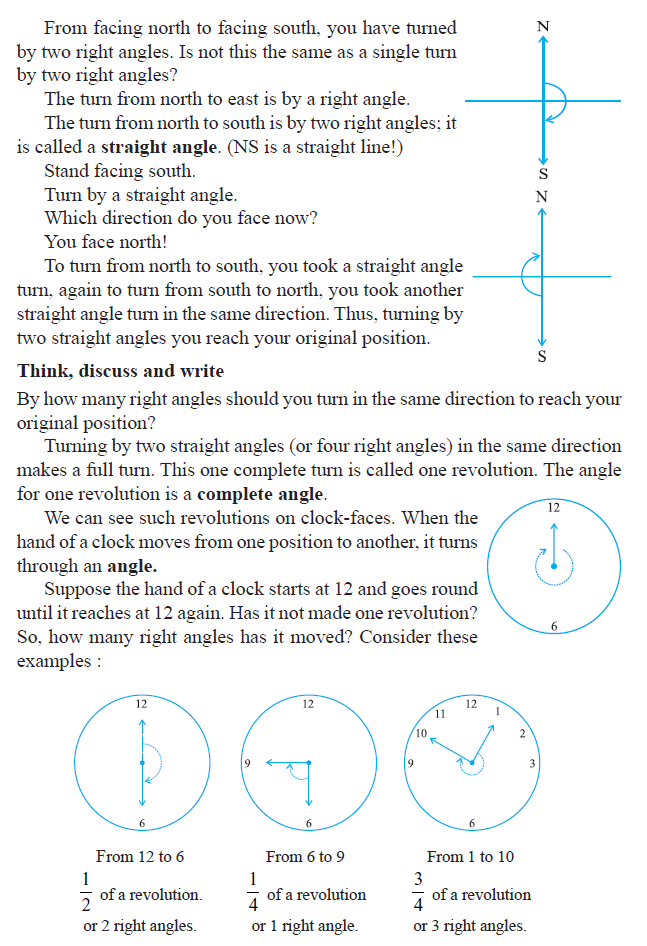 Note that there is no special name for three-fourth of a revolution.

1. What fraction of a clockwise revolution does the hour hand of a clock turn through, when it goes from

2. Where will the hand of a clock stop if it

(Should we specify clockwise or anti-clockwise for this last question? Why not?)

4. What part of a revolution have you turned through if you stand facing

(a) east and turn clockwise to face north?

(b) south and turn clockwise to face east?

5. Find the number of right angles turned through by the hour hand of a clock when it goes from

6. How many right angles do you make if you start facing

a) south and turn clockwise to west?

(b) north and turn anti-clockwise to east?

(d) south and turn to north?

7. Where will the hour hand of a clock stop if it starts

(b) from 8 and turns through 2 right angles?

(d) from 7 and turns through 2 straight angles? 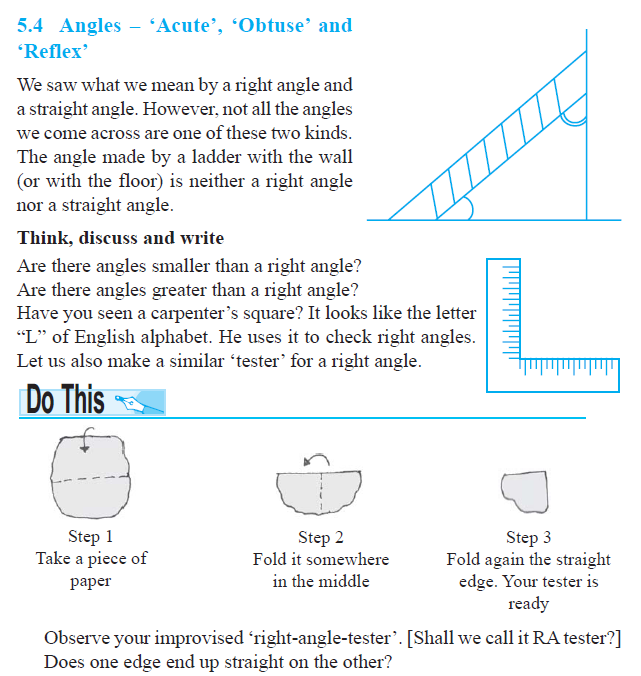 Suppose any shape with corners is given. You can use your RA tester to
test the angle at the corners.
Do the edges match with the angles of a paper? If yes, it indicates a
right angle. 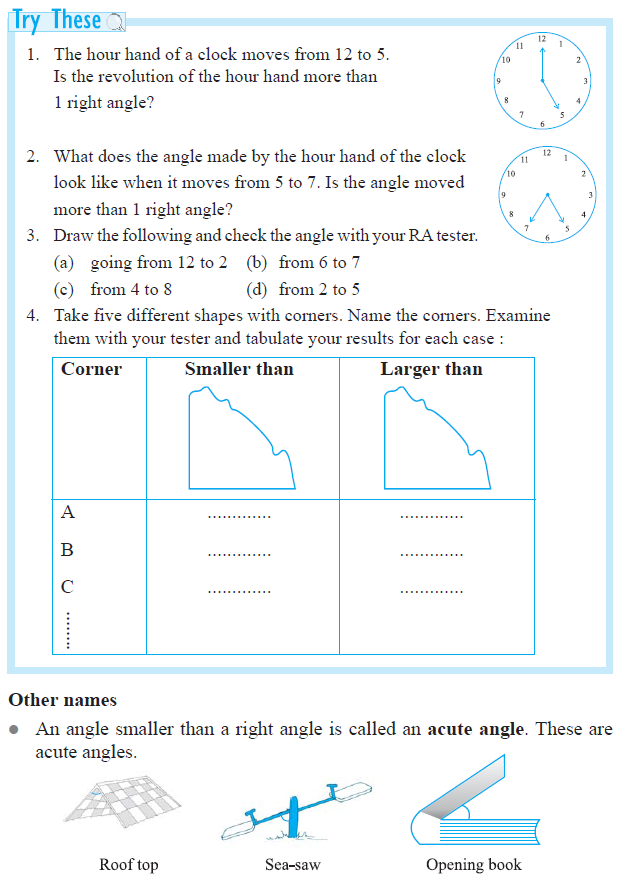 Do you see that each one of them is less than one-fourth of a revolution?

Examine them with your RA tester. 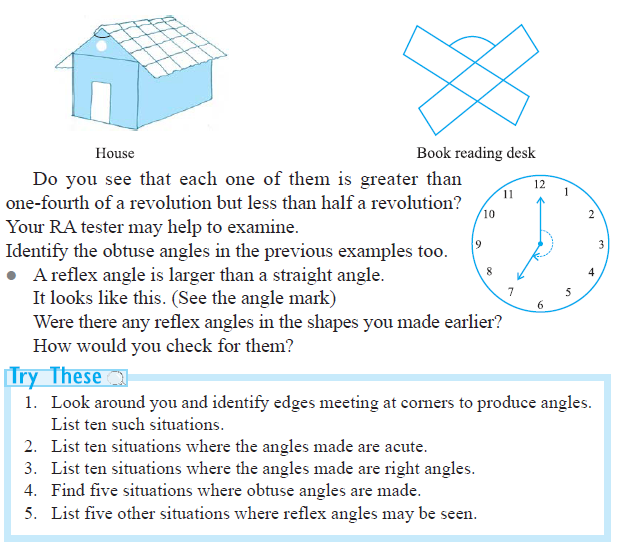 2. Classify each one of the following angles as right, straight, acute, obtuse or reflex : 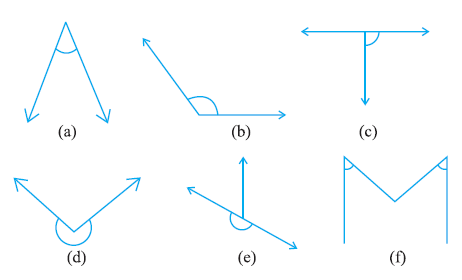 The improvised ‘Right-angle tester’ we made is helpful to compare angles with a right angle. We were able to classify the angles as acute, obtuse or reflex.

But this does not give a precise comparison. It cannot find which one among the two obtuse angles is greater. So in order to be more precise in comparison, we need to ‘measure’ the angles. We can do it with a ‘protractor’.


The measure of angle

We call our measure, ‘degree measure’. One complete revolution is divided into 360 equal parts. Each part is a degree. We write 360° to say ‘three hundred sixty degrees’.

How many degrees are there in half a revolution? In one right angle? In one straight angle? 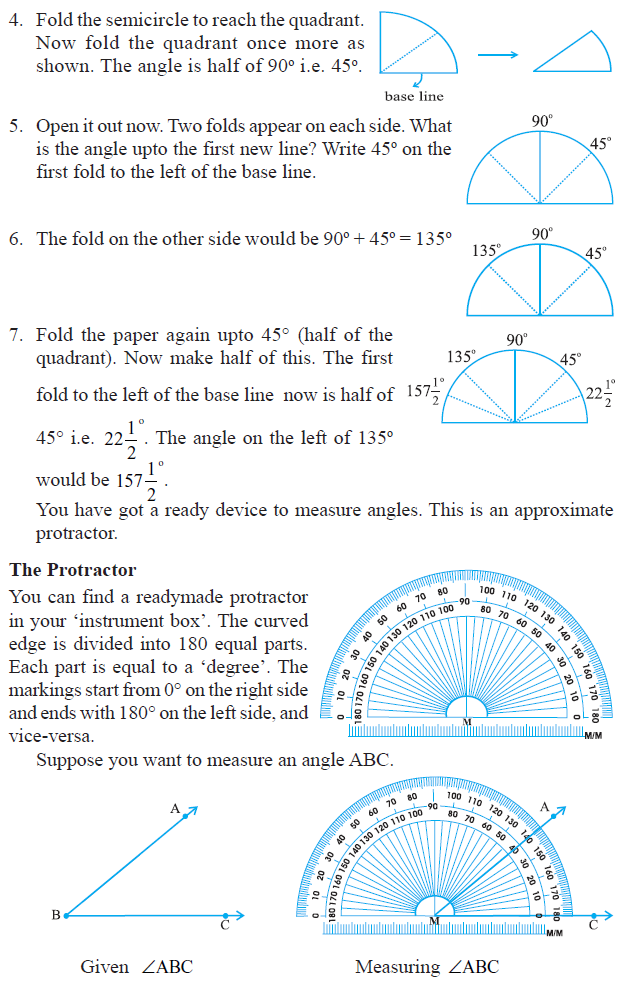 1. Place the protractor so that the mid point (M in the figure) of its
straight edge lies on the vertex B of the angle.

3. Write down the measures of

(a) some acute angles.

(b) some obtuse angles. (give at least two examples of each).

4. Measure the angles given below using the Protractor and write down the measure. 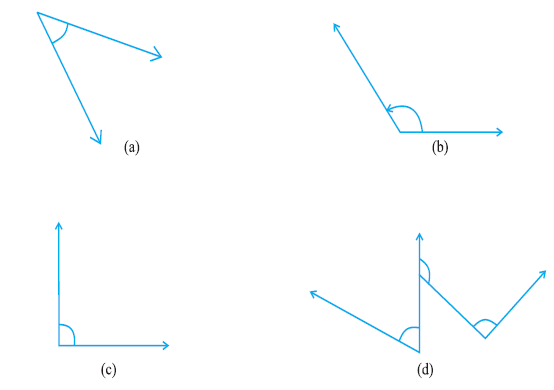 (c) An angle whose measure is the sum of the measures of two right angles is _____.

(e) When the sum of the measures of two angles is that of a straight angle and if one of them is acute then the other should be _______.

8. Find the measure of the angle shown in each figure. (First estimate with your eyes and then find the actual measure with a protractor).

9. Find the angle measure between the hands of the clock in each figure : 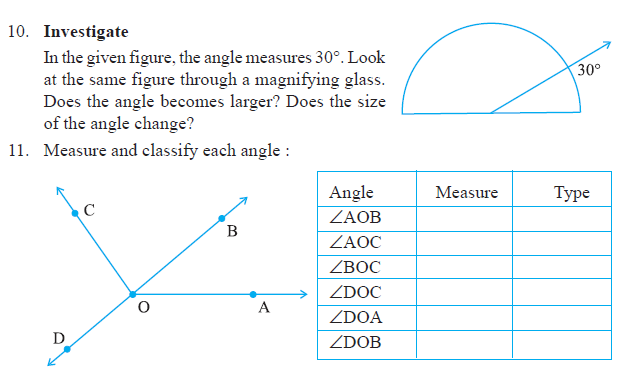 When two lines intersect and the angle between them is a right angle, then the lines are said to be perpendicular. If a line AB is perpendicular to CD, we

If AB ⊥ CD, then should we say that CD ⊥ ABalso?

You can give plenty of examples from things around you for perpendicular lines (or line segments). The English alphabet T is one. Is there any other alphabet which illustrates perpendicularity?

1. Which of the following are models for perpendicular lines :

(a) The adjacent edges of a table top.

(b) The lines of a railway track.

(c) Identify any two line segments for which PE is the perpendicular bisector.

Do you remember a polygon with the least number of sides? That is a triangle.

Let us see the different types of triangle we can get. 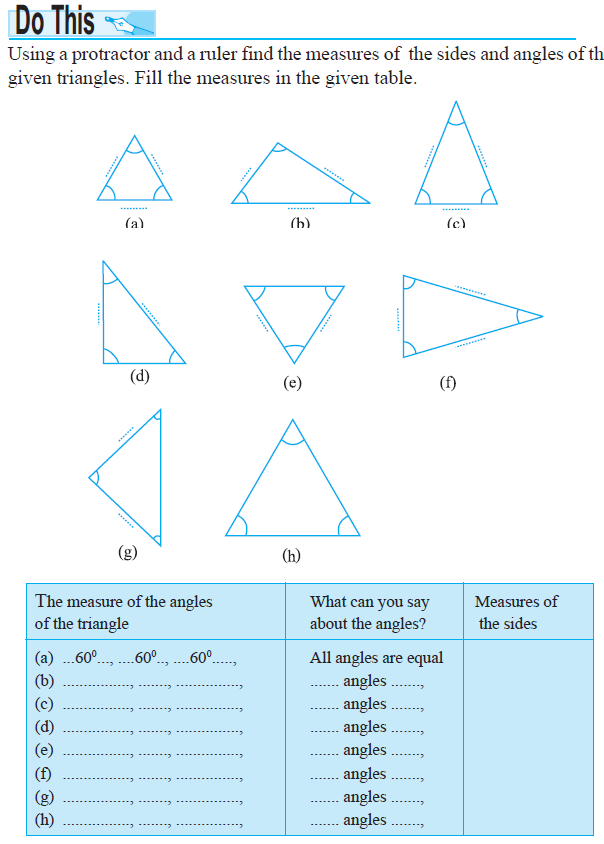 Observe the angles and the triangles as well as the measures of the sides carefully. Is there anything special about them?

What do you find?

If all the angles in a triangle are equal, then its sides are also …………..

If all the sides in a triangle are equal, then its angles are…………. .

If the three sides of a triangle are unequal then, the three angles are also…………. .

Naming triangles based on sides

A triangle having all three unequal sides is called a Scalene Triangle [(c), (e)].

A triangle having two equal sides is called an Isosceles Triangle [(b), (f)].

A triangle having three equal sides is called an Equilateral Triangle [(a), (d)].

Classify all the triangles whose sides you measured earlier, using these definitions.

Naming triangles based on angles

If any one angle is greater than 90°, then the triangle is called an obtuse angled triangle. 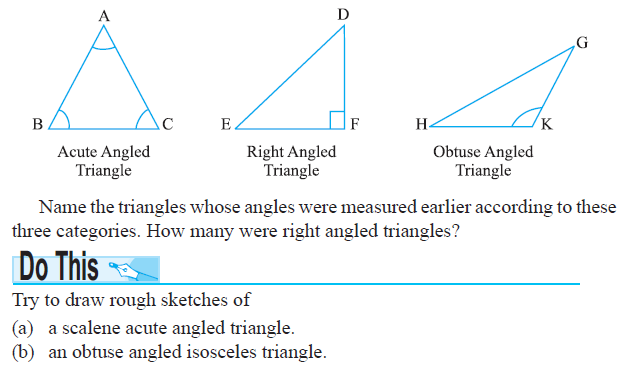 Do you think it is possible to sketch

(a) an obtuse angled equilateral triangle ?

(b) a right angled equilateral triangle ?

Think, discuss and write your conclusions.

1. Name the types of following triangles :

3. Name each of the following triangles in two different ways: (you may judge the nature of the angle by observation) 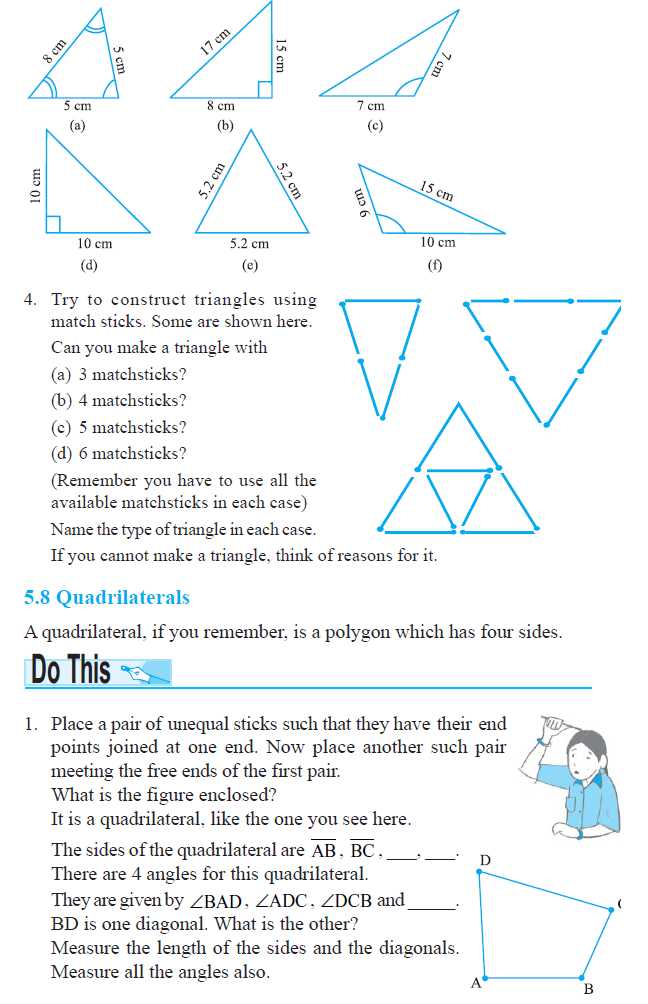 2. Using four unequal sticks, as you did in the above activity, see if you can form a quadrilateral such that

(a) all the four angles are acute.

(b) one of the angles is obtuse.

(c) one of the angles is right angled.

(d) two of the angles are obtuse.

(e) two of the angles are right angled.

(f) the diagonals are perpendicular to one another. 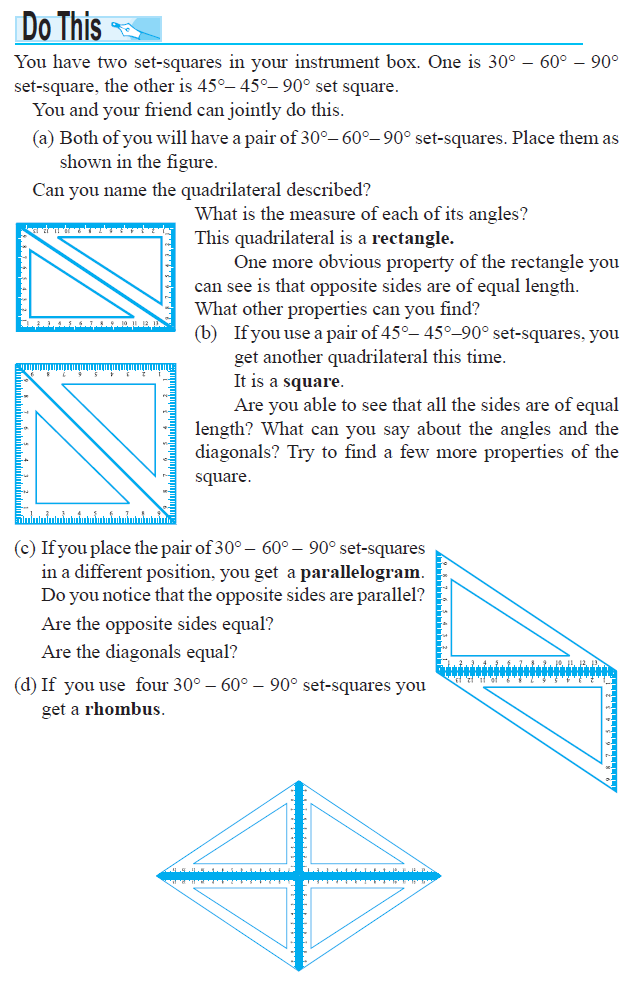 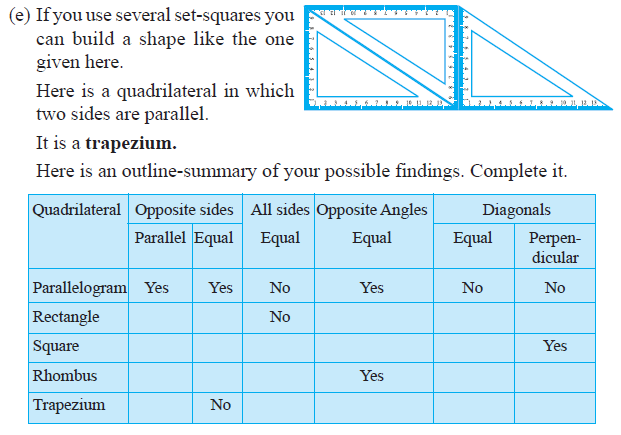 (a) Each angle of a rectangle is a right angle.

(b) The opposite sides of a rectangle are equal in length.

(c) The diagonals of a square are perpendicular to one another.

(d) All the sides of a rhombus are of equal length.

(e) All the sides of a parallelogram are of equal length.

(f) The opposite sides of a trapezium are parallel.

2. Give reasons for the following :

(a) A square can be thought of as a special rectangle.

(b) A rectangle can be thought of as a special parallelogram.

(c) A square can be thought of as a special rhombus.

(e) Square is also a parallelogram.

So far you studied polygons of 3 or 4 sides (known as triangles and quardrilaterals respectively). We now try to extend the idea of polygon to figures with more number of sides. We may classify polygons according to the number of their sides. 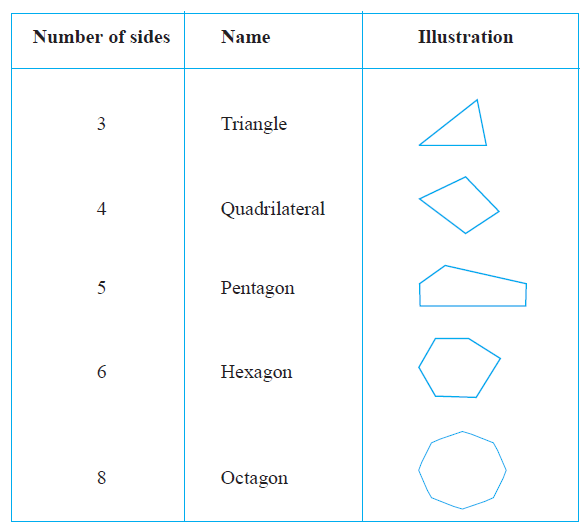 You can find many of these shapes in everyday life. Windows, doors, walls, almirahs, blackboards, notebooks are all usually rectanglular in shape. Floor tiles are rectangles. The sturdy nature of a triangle makes it the most useful shape in engineering constructions.

Look around and see where you can find all these shapes.

1. Examine whether the following are polygons. If any one among them is not, say why? 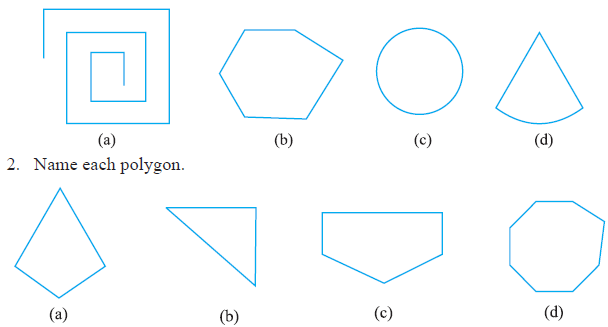 Make two more examples of each of these.

3. Draw a rough sketch of a regular hexagon. Connecting any three of its vertices,

draw a triangle. Identify the type of the triangle you have drawn.

4. Draw a rough sketch of a regular octagon. (Use squared paper if you wish).

Draw a rectangle by joining exactly four of the vertices of the octagon.

5. A diagonal is a line segment that joins any two vertices of the polygon and is not a side of the polygon. Draw a rough sketch of a pentagon and draw its diagonals.

Here are a few shapes you see in your day-to-day life. Each shape is a solid. It is not a‘flat’ shape. 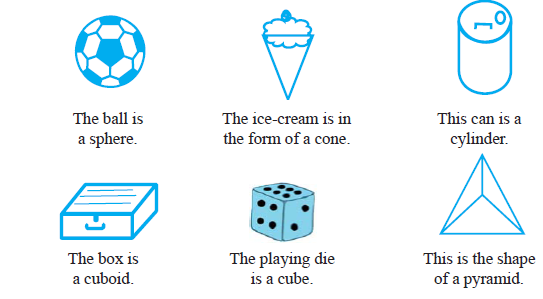 Name any five things which resemble a sphere.

Name any five things which resemble a cone.

In case of many three dimensional shapes we can distinctly identify their faces, edges and vertices. What do we mean by these terms: Face, Edge and Vertex? (Note ‘Vertices’ is the plural form of ‘vertex’).

Consider a cube, for example.

Each side of the cube is a flat surface called a flat face (or simply a face). Two faces meet at a line segment called an edge. Three edges meet at a point called a vertex. 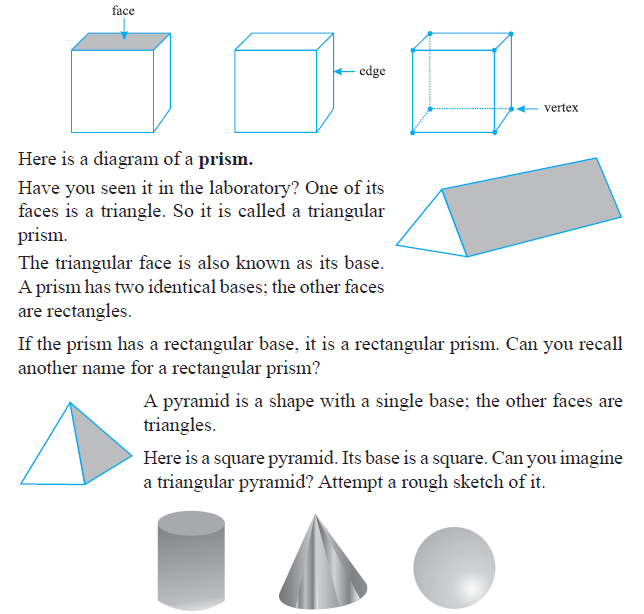 The cylinder, the cone and the sphere have no straight edges. What is the base of a cone? Is it a circle? The cylinder has two bases. What shapes are they? Of course, a sphere has no flat faces! 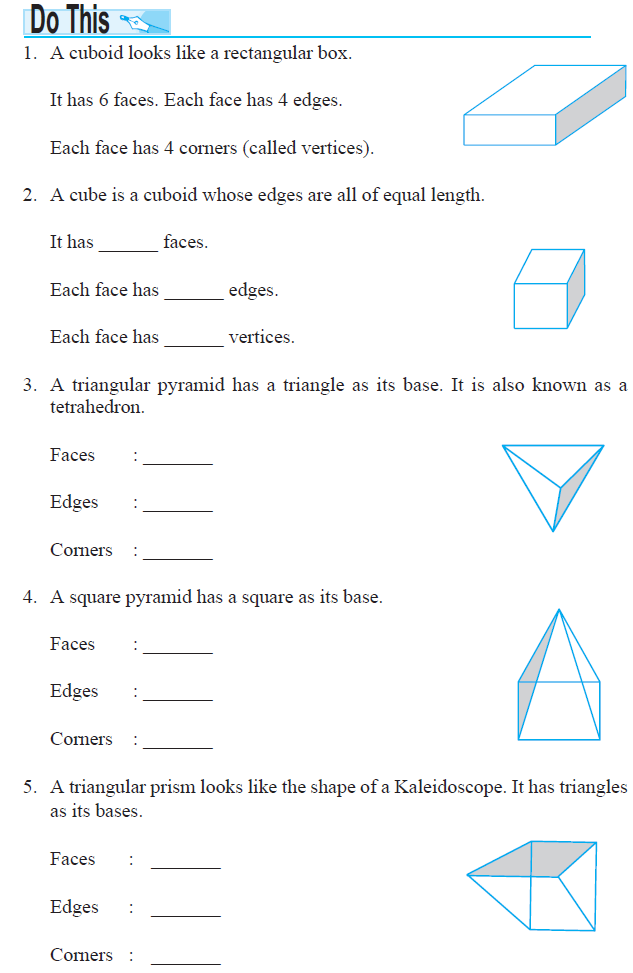 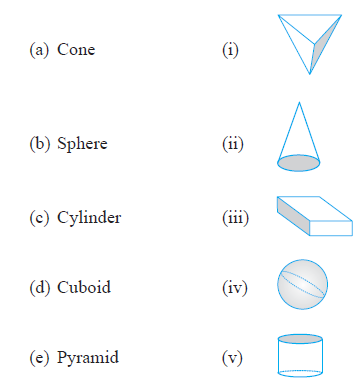 Give two new examples of each shape.

1. The distance between the end points of a line segment is its length.

2. A graduated ruler and the divider are useful to compare lengths of line segments.

3. When a hand of a clock moves from one position to another position we have an example for an angle.

One full turn of the hand is 1 revolution.

4. Two intersecting lines are perpendicular if the angle between them is 90°.

6. Triangles can be classified as follows based on their angles: 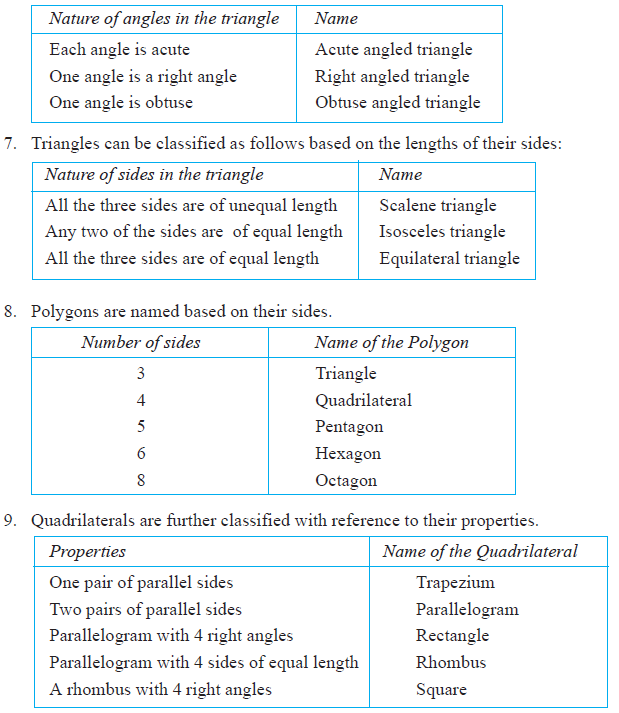 10. We see around us many three dimensional shapes. Cubes, cuboids, spheres, cylinders, cones, prisms and pyramids are some of them.