Subhash had learnt about fractions in Classes IV and V, so whenever possible 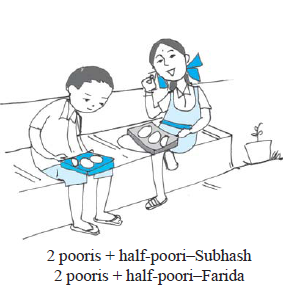 he would try to use fractions. One occasion was when he forgot his lunch at home. His friend Farida invited him to share her lunch. She had five pooris in her lunch box. So, Subhash and Farida took two pooris each. Then Farida made two equal halves of th  fifth poori and gave one-half to Subhash and took the other half herself. Thus, both Subhash and Farida had 2 full pooris and one-half poori.

one whole (Fig 7.2). So, each equal part is one-fourth of one whole poori and

Farida said that we have learnt that a fraction is a number representing part of a whole. The whole may be a single object or a group of objects.
Subhash observed that the parts have to be equal 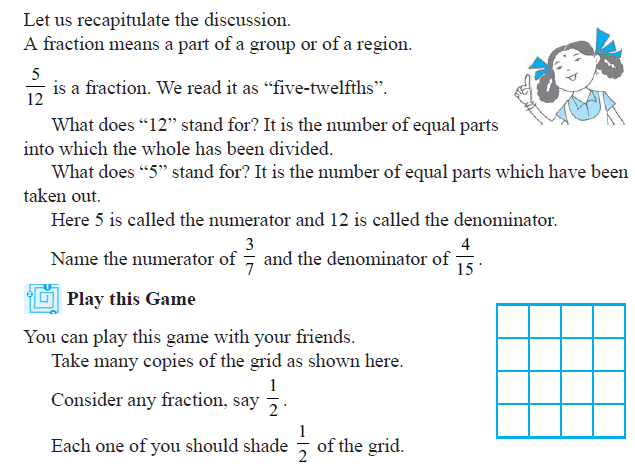 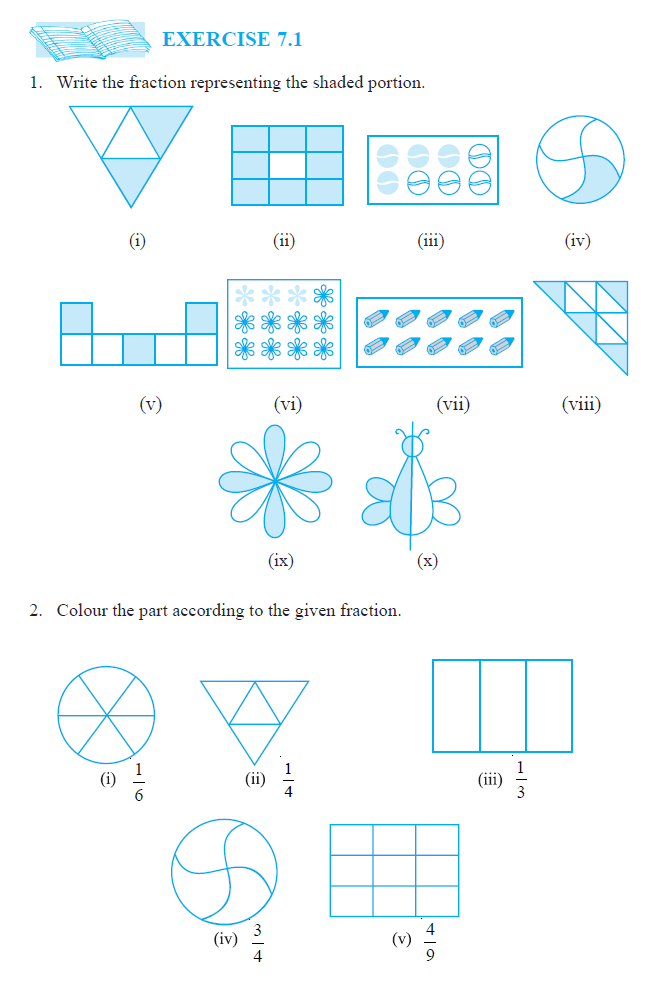 6. Arya, Abhimanyu, and Vivek shared lunch. Arya has brought two sandwiches, one made of vegetable and one of jam. The other two boys forgot to bring their lunch. Arya agreed to share his sandwiches so that each person will have an equal share of each sandwich.

(a) How can Arya divide his sandwiches so that each person has an equal share?

(b) What part of a sandwich will each boy receive?

8. Write the natural numbers from 2 to 12. What fraction of them are prime numbers?

7.3 Fraction on the Number Line

You have learnt to show whole numbers like 0,1,2… on a number line. 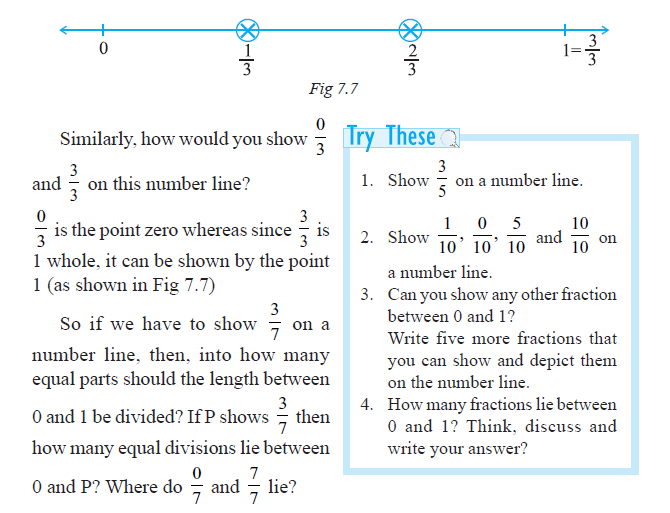 Does any one of the fractions lie beyond 1?

All these fractions lie to the left of 1as they are less than 1. 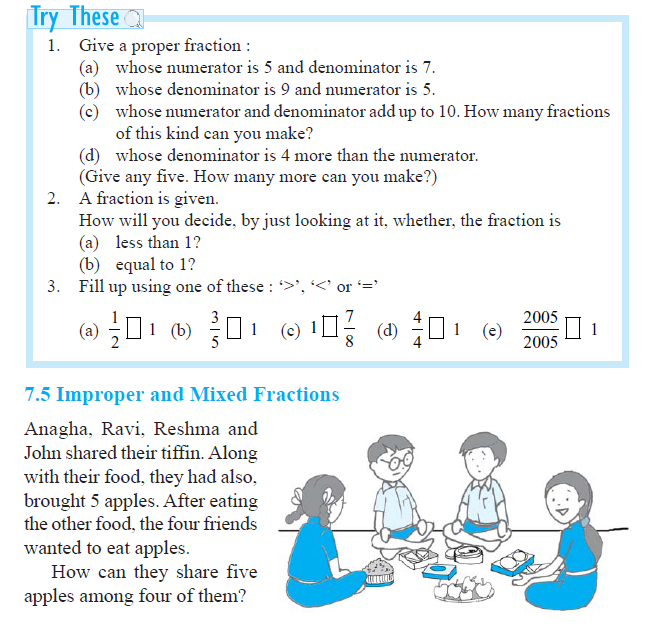 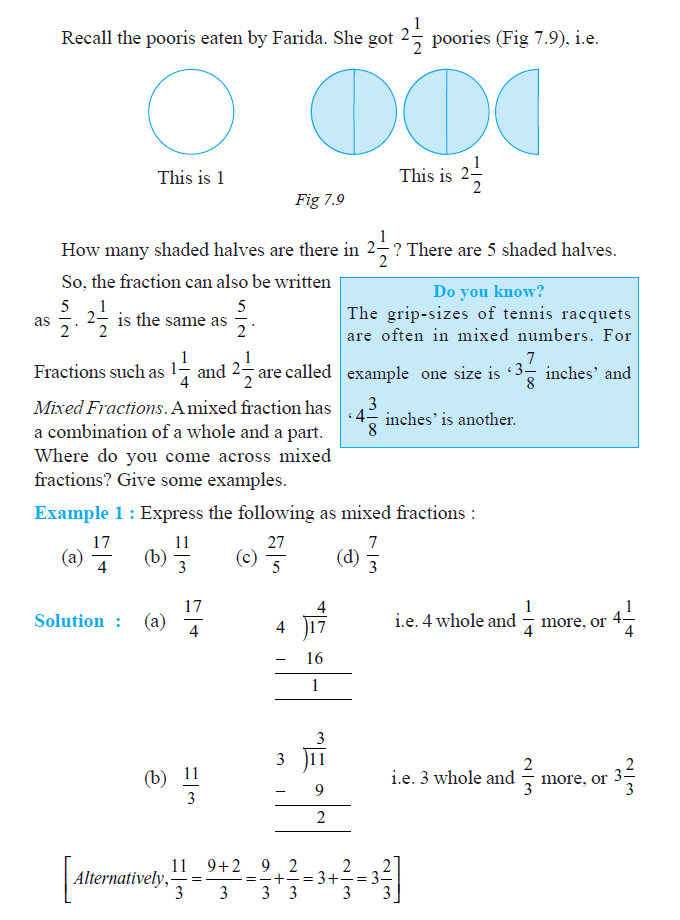 Try (c) and (d) using both the methods for yourself.

Thus, we can express an improper fraction as a mixed fraction by dividing the numerator by denominator to obtain the quotient and the remainder. Then 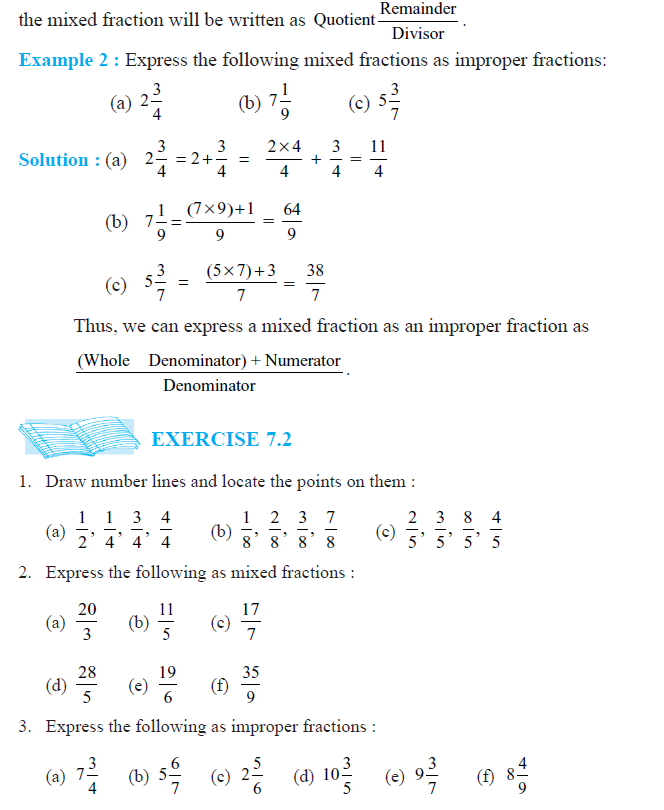 Look at all these representations of fraction (Fig 7.10).

These fractions are 1/2, 2/4, 3/6   representing the parts taken from the total number of parts. If we place the pictorial representation of one over the other they are found to be equal. Do you agree?

To find an equivalent fraction of a given fraction, you may multiply both the numerator and the denominator of the given fraction by the same number. 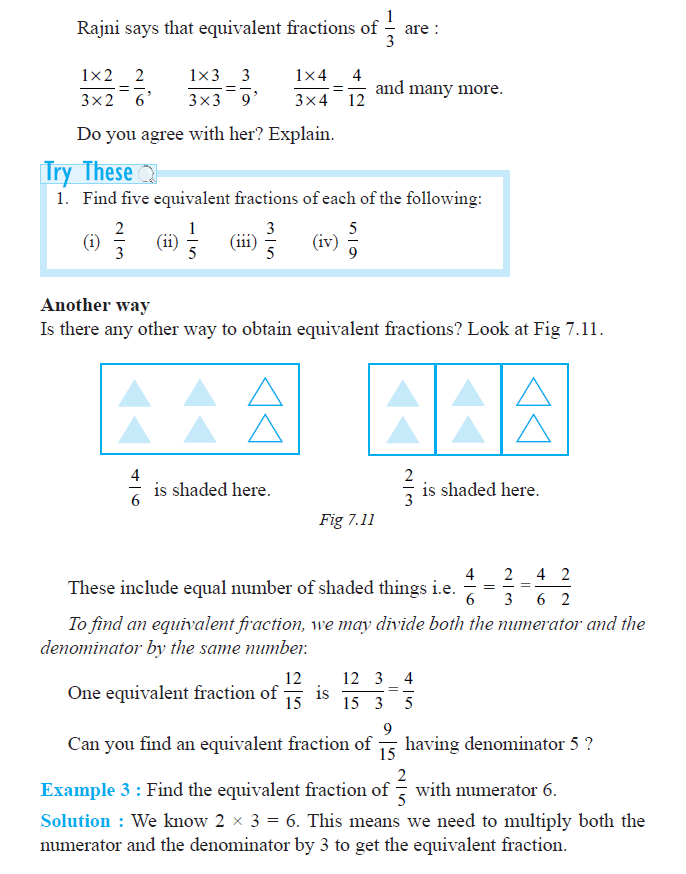 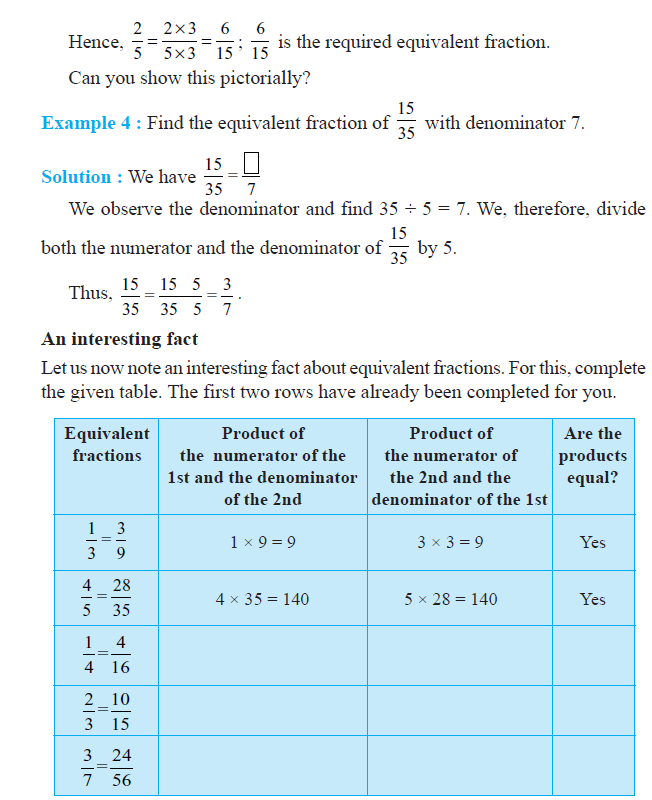 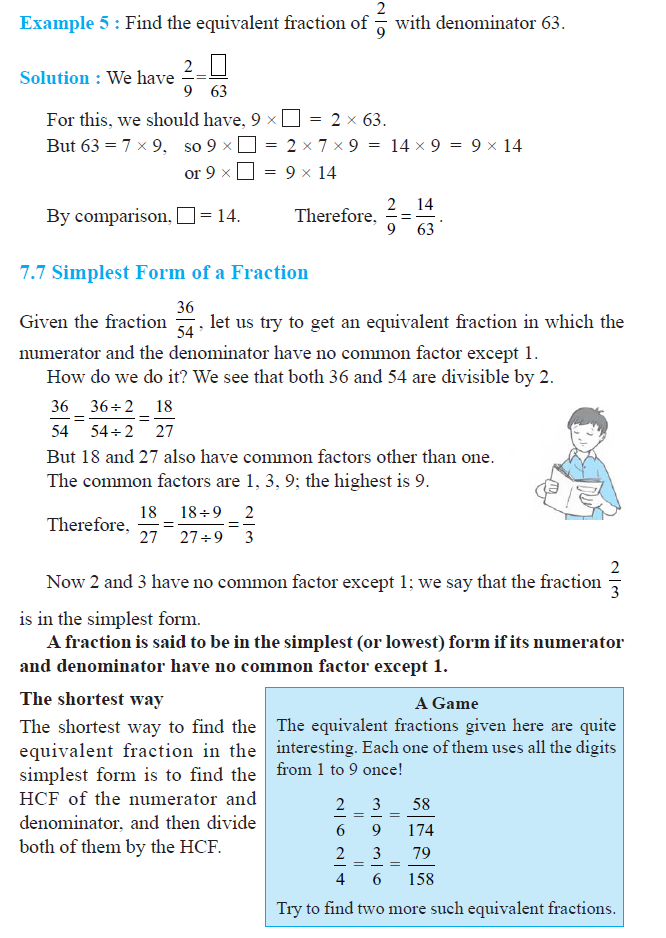 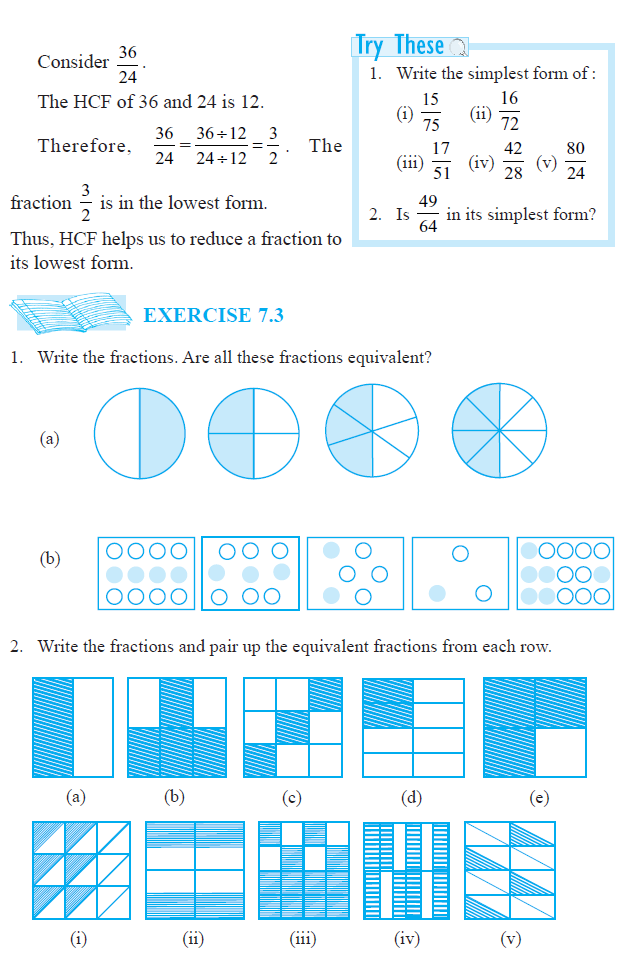 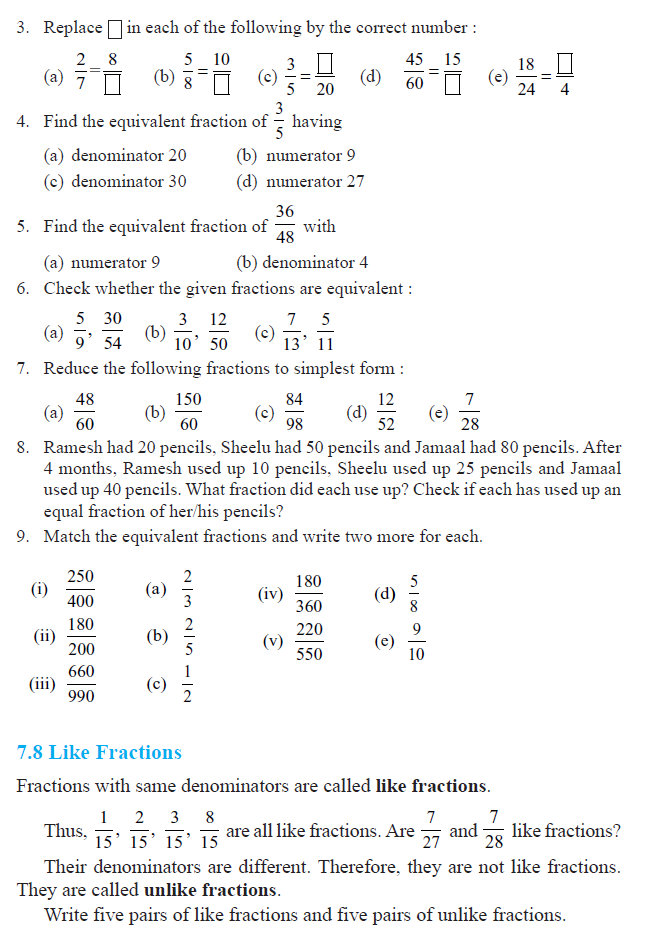 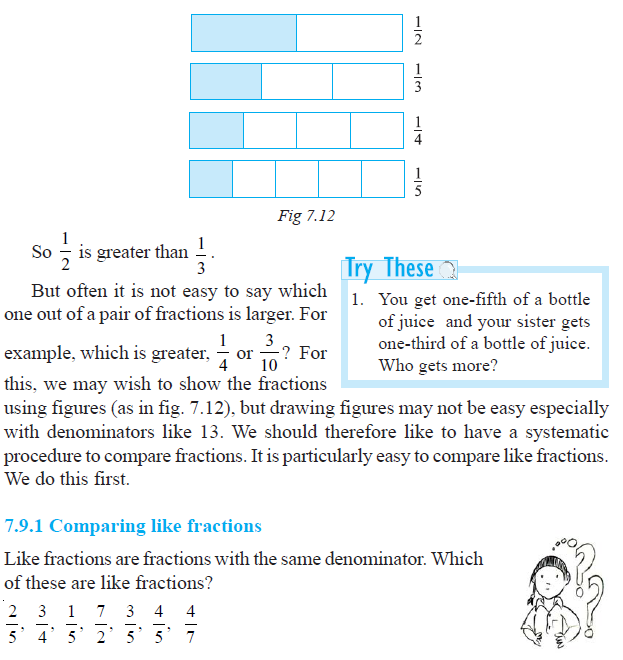 Two fractions are unlike if they have different denominators. For example, 1/3 and 1/5 are unlike fractions. So are 2/3 and 3/5 .

Unlike fractions with the same numerator :

Consider a pair of unlike fractions 1/3 and 1/5 , in which the numerator is the 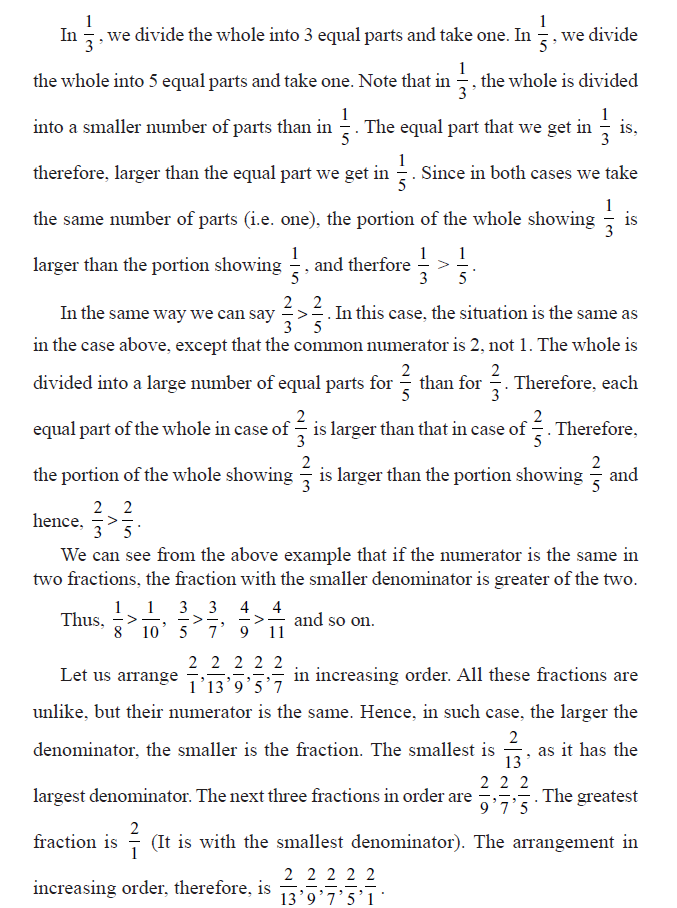 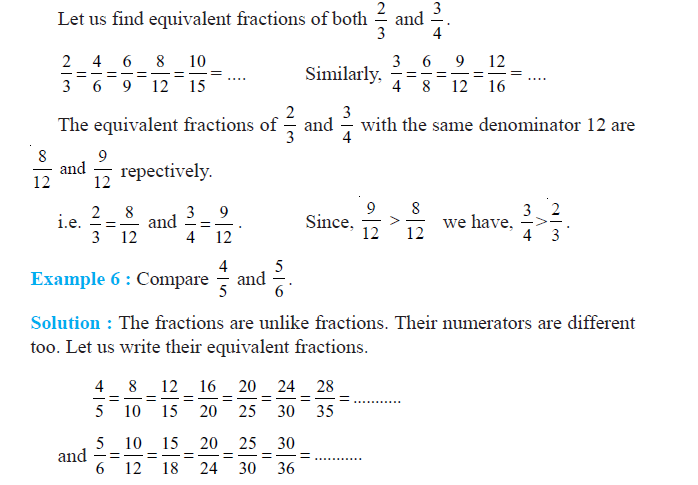 The equivalent fractions with the same denominator are :

Note that the common denominator of the equivalent fractions is 30 which is 5 × 6. It is a common multiple of both 5 and 6.

So, when we compare two unlike fractions, we first get their equivalent fractions with a denominator which is a common multiple of the denominators
of both the fractions.

Solution : The fractions are unlike. We should first get their equivalent fractions with a denominator which is a common multiple of 6 and 15.

The product of 6 and 15 is 90; obviously 90 is also a common multiple of 6 and 15. We may use 90 instead of 30; it will not be wrong. But we know that
it is easier and more convenient to work with smaller numbers. So the common multiple that we take is as small as possible. This is why the LCM of the denominators of the fractions is preferred as the common denominator.

Who exercised for a longer time?

7.10 Addition and Subtraction of Fractions

So far in our study we have learnt about natural numbers, whole numbers and then integers. In the present chapter, we are learning about fractions, a different type of numbers.

Whenever we come across new type of numbers, we want to know how to operate with them. Can we combine and add them? If so, how? Can we take
away some number from another? i.e., can we subtract one from the other? and so on. Which of the properties learnt earlier about the numbers hold now?Which are the new properties? We also see how these help us deal with our daily life situations. 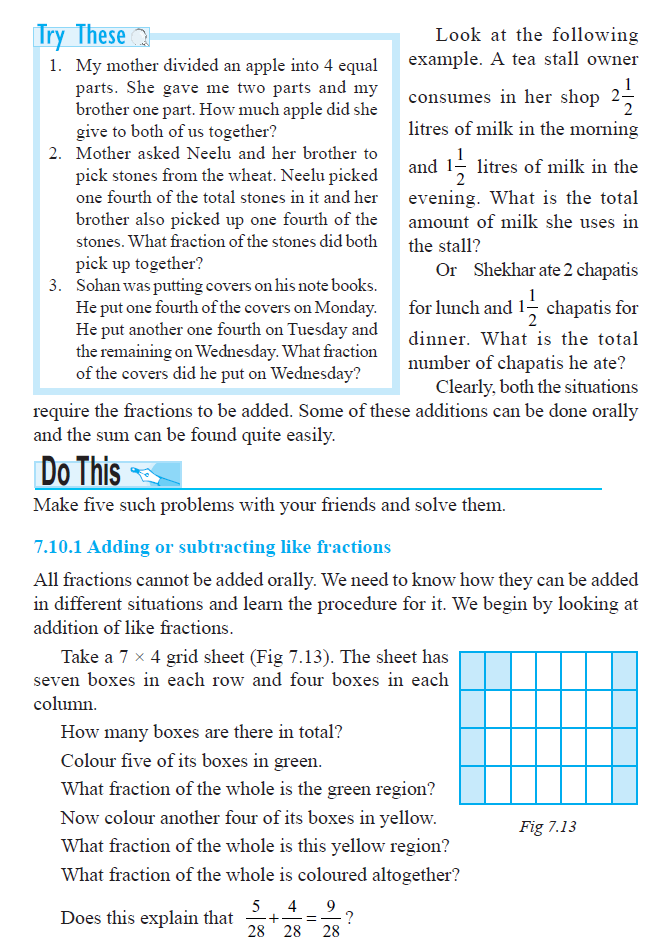 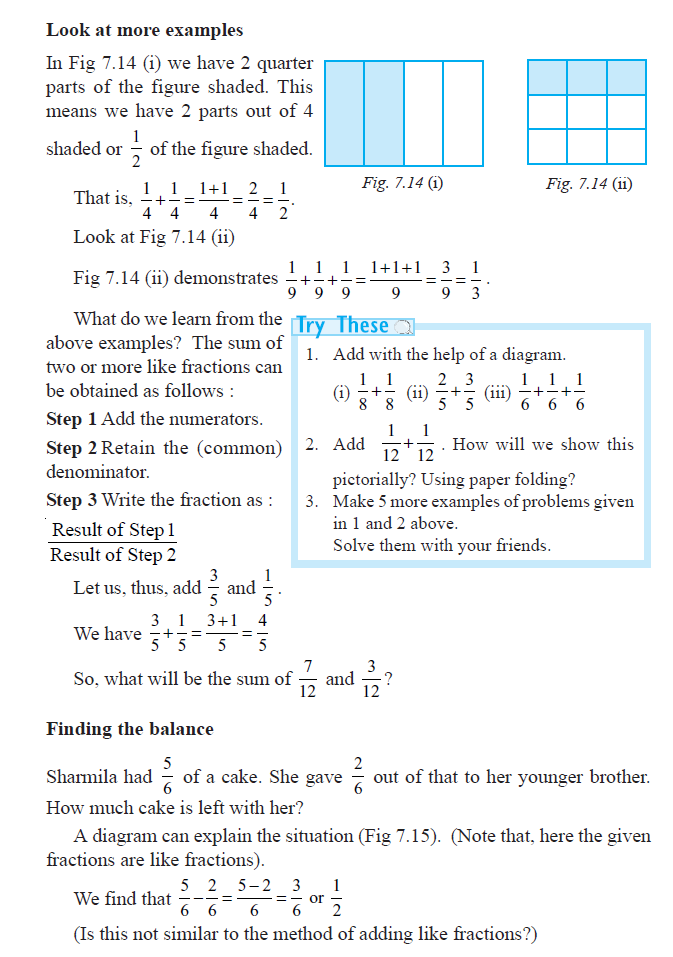 Thus, we can say that the difference of two like fractions can be obtained as follows: 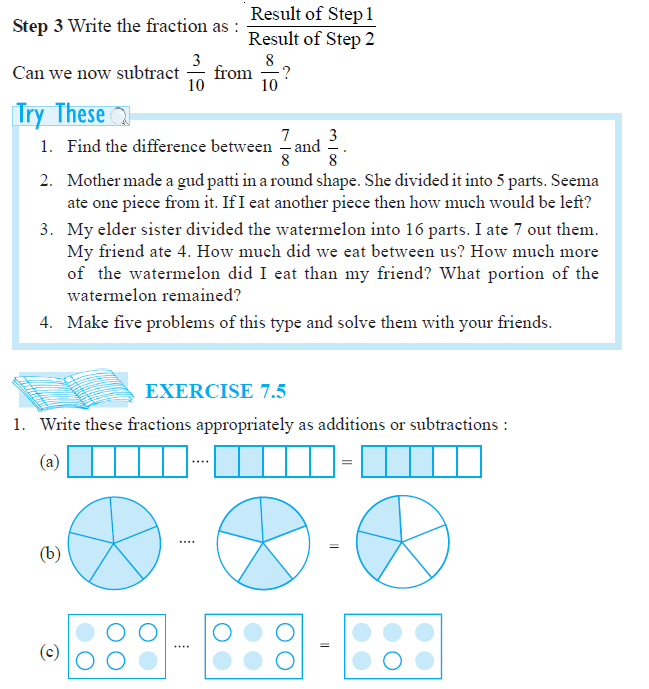 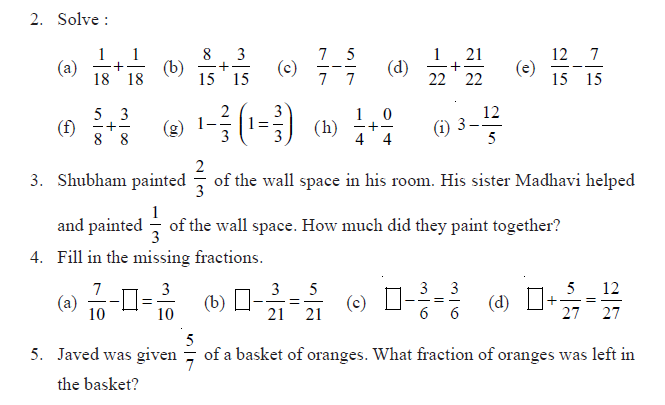 Since 1/5 and 1/2 are unlike fractions, in order to subtract them, we first find their equivalent fractions with the same denominator. These are 2/10
and 5/10  respectively.

same denominator. This denominator is given by the LCM of 4 and 6. The required LCM is 12. 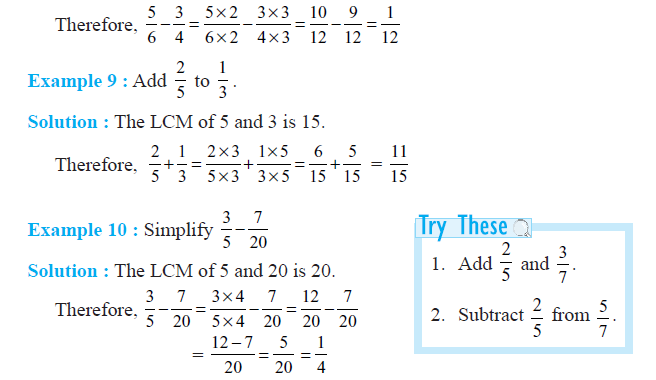 How do we add or subtract mixed fractions? 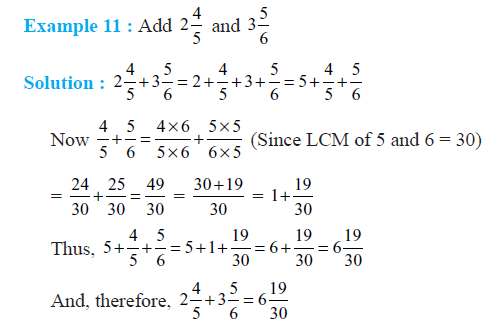 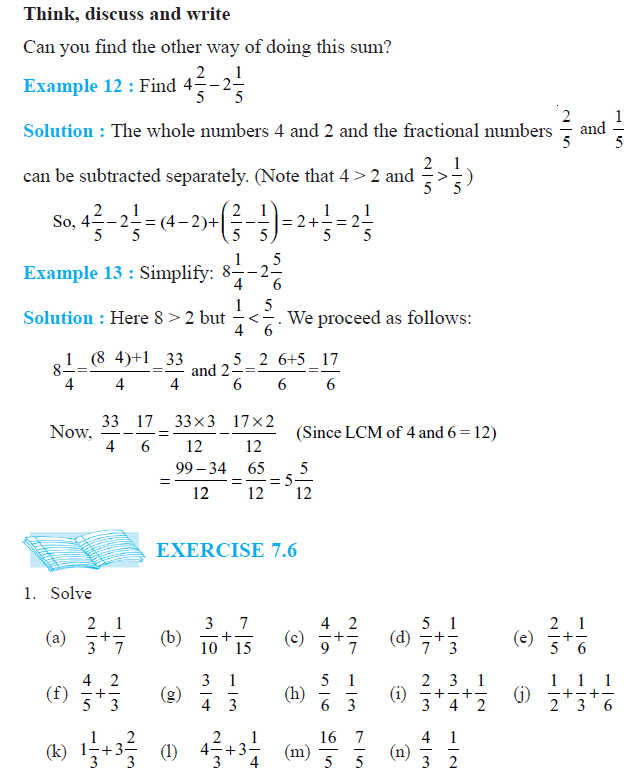 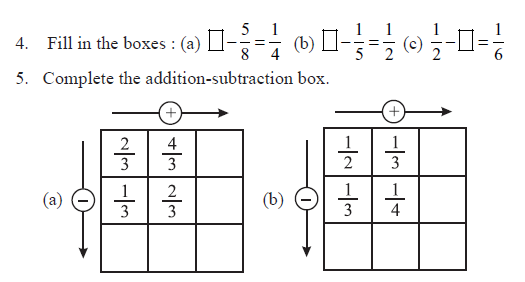 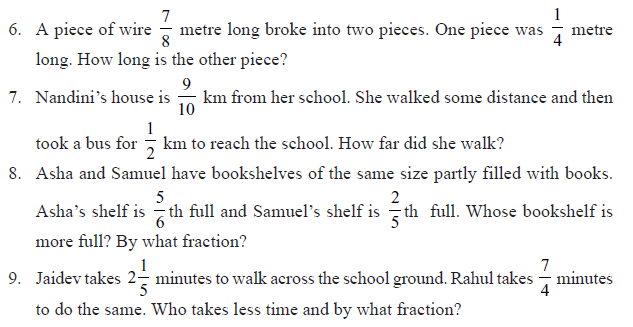 1. (a) A fraction is a number representing a part of a whole. The whole may be a single object or a group of objects.

(b) When expressing a situation of counting parts to write a fraction, it must be ensured that all parts are equal.

3. Fractions can be shown on a number line. Every fraction has a point associated with it on the number line.

6. A fraction is said to be in the simplest (or lowest) form if its numerator and the denominator have no common factor except 1.