The main feature of the new branch which we are going to study is the use of letters. Use of letters will allow us to write rules and formulas in a general way. By using letters, we can talk about any number and not just a particular number. Secondly, letters may stand for unknown quantities. By learning methods of determining unknowns, we develop powerful tools for solving puzzles and many problems from daily life. Thirdly, since letters stand for numbers, operations can be performed on them as on numbers. This leads to the study of algebraic expressions and their properties.

You will find algebra interesting and useful. It is very useful in solving problems. Let us begin our study with simple examples.

Ameena and Sarita are making patterns with matchsticks. They decide to make simple patterns of the letters of the English alphabet. Ameena takes two matchsticks and forms the letter L as shown in Fig 11.1 (a). 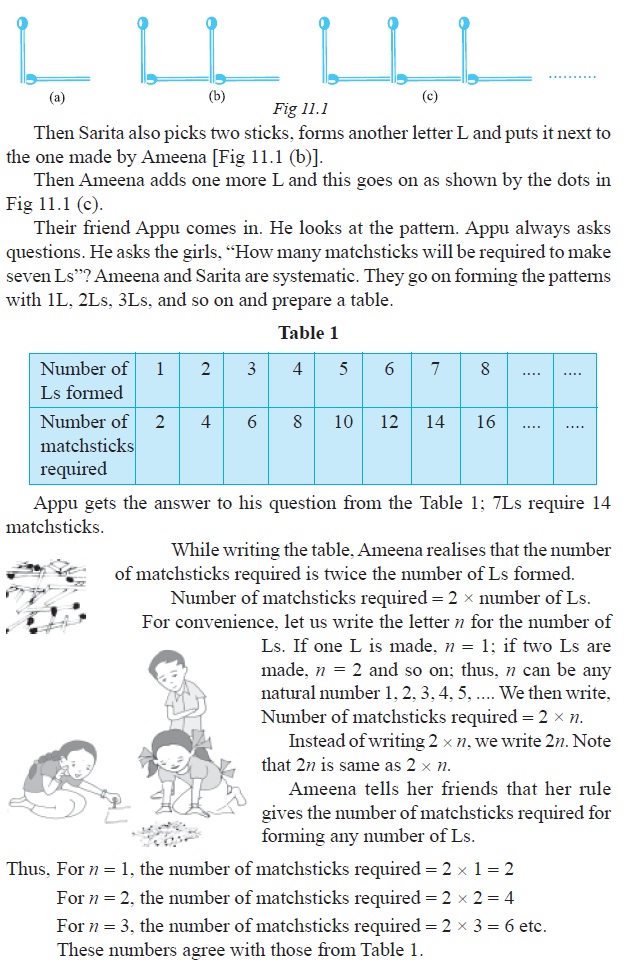 Sarita says, “The rule is very powerful! Using the rule, I can say how many matchsticks are required to form even 100 Ls. I do not need to draw the pattern or make a table, once the rule is known”. Do you agree with Sarita?

In the above example, we found a rule to give the number of matchsticks required to make a pattern of Ls. The rule was :

n is an example of a variable. Its value is not fixed; it can take any value 1, 2, 3, 4, … . We wrote the rule for the number of matchsticks required using the variable n.

The word ‘variable’ means something that can vary, i.e. change. The value of a variable is not fixed. It can take different values.

We shall look at another example of matchstick patterns to learn more about variables.

Ameena and Sarita have become quite interested in matchstick patterns. They now want to try a pattern of the letter C. To make one C, they use three matchsticks as shown in Fig. 11.2(a). 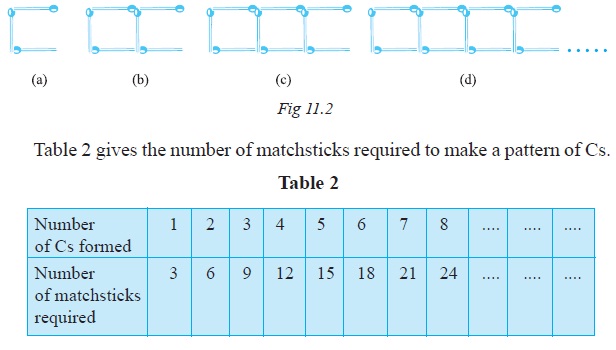 Can you complete the entries left blank in the table?

Sarita comes up with the rule :
Number of matchsticks required = 3n

Next, Ameena and Sarita wish to make a pattern of Fs. They make one F using 4 matchsticks as shown in Fig 11.3(a). 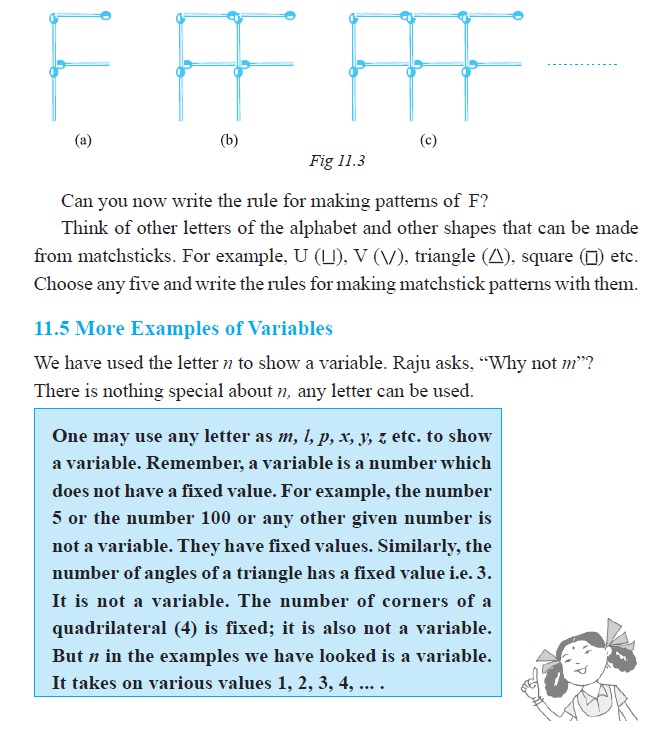 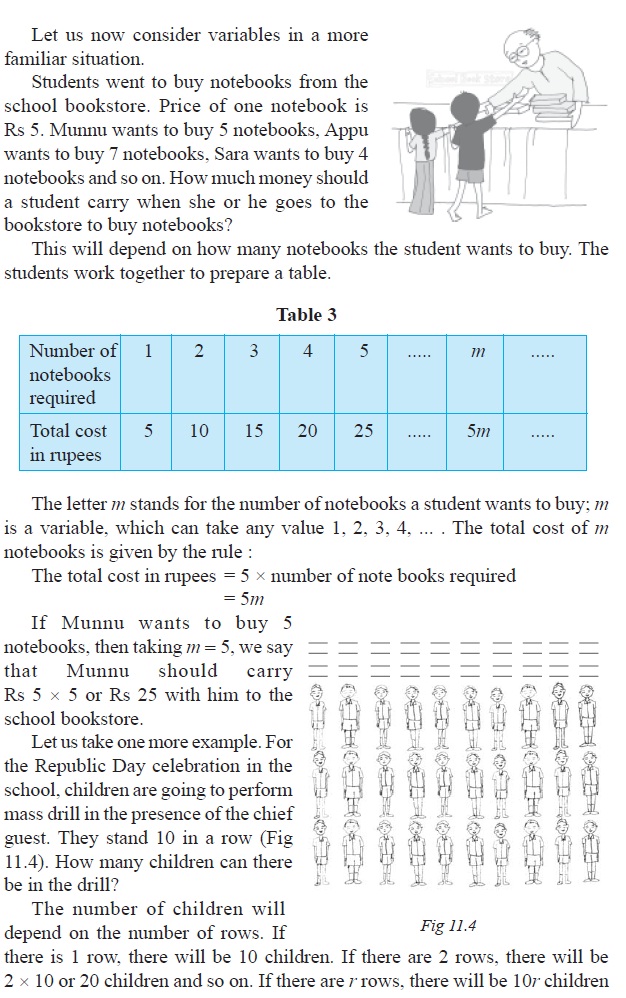 In all the examples seen so far, the variable was multiplied by a number. There can be different situations as well in which numbers are added to or subtracted from the variable as seen below. 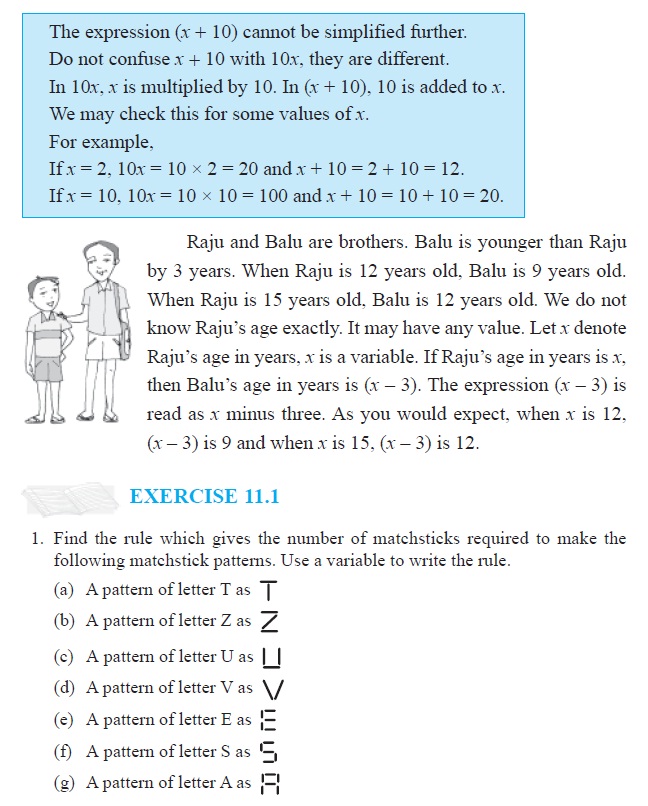 2. We already know the rule for the pattern of letters L, C and F. Some of the letters from Q.1 (given above) give us the same rule as that given by L. Which are these? Why does this happen?

of the sides AD or BC. Therefore,

The rule, therefore, is that the perimeter of a rectangle = 2l + 2b where, l and b are respectively the length and breadth of the rectangle. Discuss what happens if l = b.

Note : Here, both l and b are variables. They take on values independent of each other. i.e. the value one variable takes does not depend on what value the other variable has taken.

In your studies of geometry you will come across several rules and formulas dealing with perimeters and areas of plane figures, and surface areas and volumes of three-dimensional figures. Also, you may obtain formulas for the sum of internal angles of a polygon, the number of diagonals of a polygon and so on. The concept of variables which you have learnt will prove very useful in writing all such general rules and formulas. 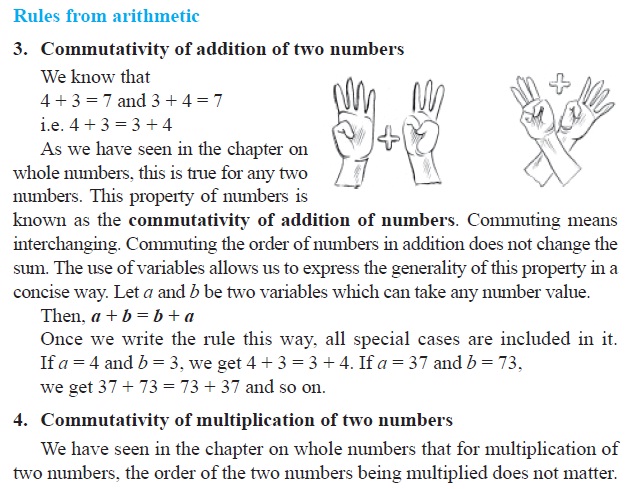 Note that a and b can take any number value. They are variables. All the special cases like

Suppose we are asked to calculate 7 × 38. We obviously do not know the table of 38. So, we do the following:

This is always true for any three numbers like 7, 30 and 8. This property is known as distributivity of multiplication over addition of numbers. 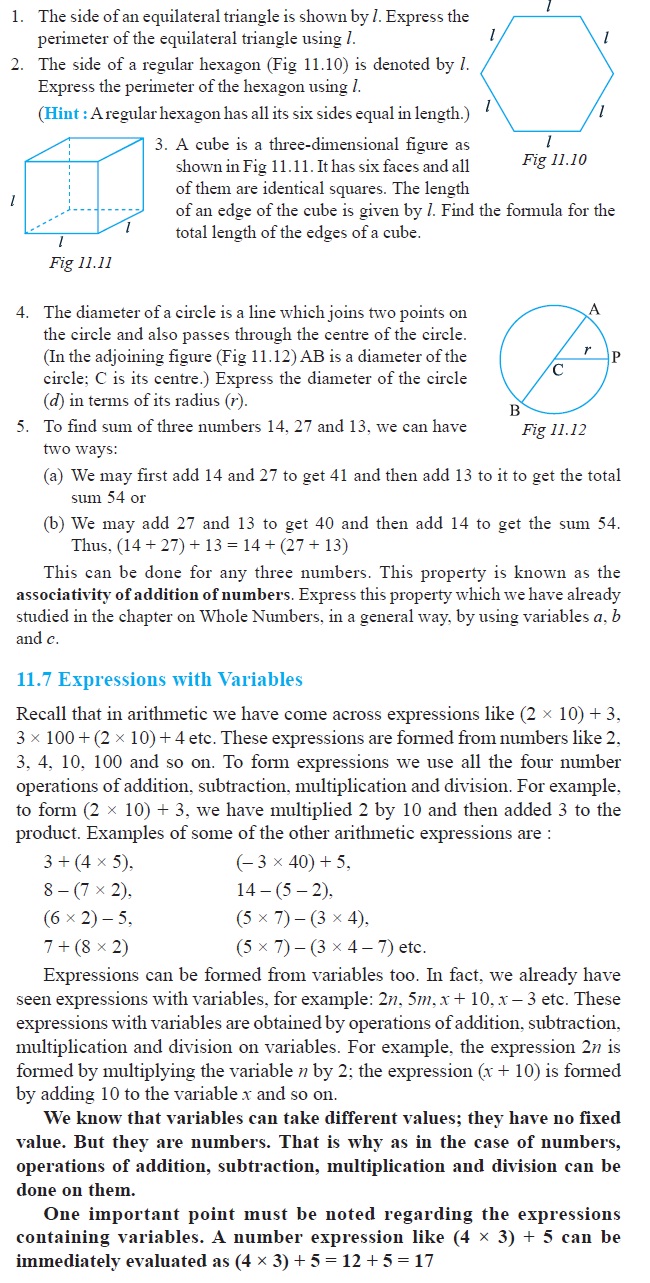 5. Give expressions in the following cases.

(d) 5 times y from which 3 is subtracted

6. (a) Form expressions using t and 4. Use not more than one number operation. Every expression must have t in it.

(b) Form expressions using y, 2 and 7. Every expression must have y in it. Use only two number operations. These should be different.

We have already come across practical situations in which expressions are useful. Let us remember some of them. 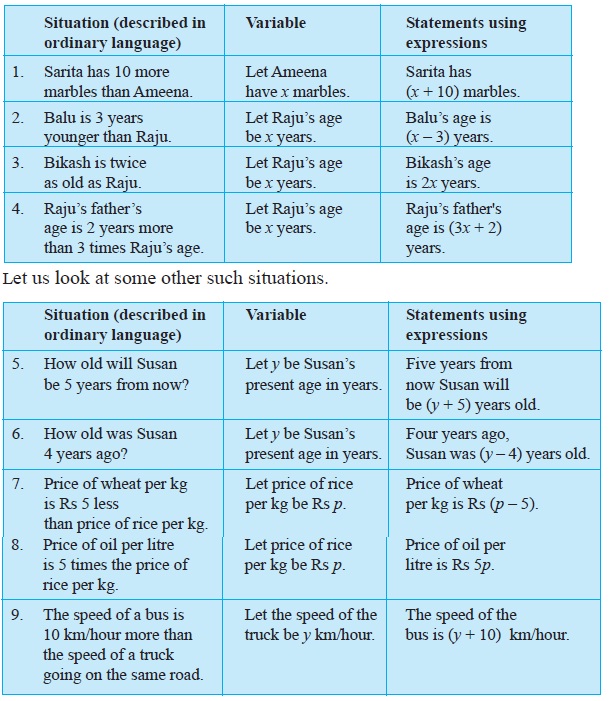 (a) Take Sarita’s present age to be y years

(iii) Sarita’s grandfather is 6 times her age. What is the age of her grandfather?

(iv) Grandmother is 2 years younger than grandfather. What is grandmother’s age? 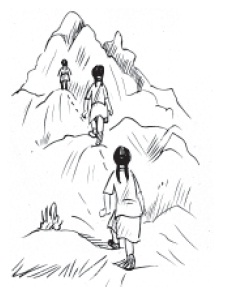 (b) The length of a rectangular hall is 4 meters less than 3 times the breadth of the hall. What is the length, if the breadth is b meters?

(c) A rectangular box has height h cm. Its length is 5 times the height and breadth is 10 cm less than the length. Express the length and the breadth of the box in terms of the height.

(b) Tony puts q marbles on the table. He has 8 q marbles in his box.

(e) In an arrangement of dots there are r rows. Each row contains 5 dots.

Now complete the entries in the following table and explain why your answer is Yes/No.