Class VI NCERT Mathematics Text Book Chapter 1 A Tale of Two Birds is given below.

THERE once lived a bird and her two new-born babies in a forest. They had a nest in a tall, shady tree and there the mother bird took care of her little ones day and night.

One day, there was a big storm. There was thunder, lightning and rain, and the wind blew down many trees. The tall tree in which the birds lived also came down. A big, heavy branch hit the nest and killed the bird. Fortunately for the baby birds, the strong wind blew them away to the other side of the forest. One of them came down near a cave where a gang of robbers lived. The other landed outside a rishi’s ashram a little distance away.

Days passed and the baby birds became big birds. One day, the king of the country came to the forest to hunt. He saw a deer and rode after it. It ran deep into the forest followed by the king. Soon the king lost his way and didn’t know where he was.

He rode on for a long time till he came to the other side of the forest. Very tired by now, he got off his horse and sat down under a tree that stood near a cave. Suddenly he heard a voice cry out, “Quick! Hurry up! There’s someone under the tree. Come and take his jewels and his horse. Hurry, or else he’ll slip away.” The king was amazed. He looked up and saw a big, brown bird on the tree under which he was sitting. He also heard faint noises issuing from the cave. He quickly got on to his horse and rode away as fast as he could.

Soon, he came to a clearing which looked like an ashram. It was the rishi’s ashram. The king tied his horse to a tree and sat down in its shade. Suddenly he heard a gentle voice announce, “Welcome to the ashram, Sir. Please go inside and rest. The rishi will be back soon. There’s some cold water in the pot. Please make yourself comfortable.” The king looked up and saw a big, brown bird in the tree. He was amazed. ‘This one looks like the other bird outside the cave,’ he said to himself aloud.

“You are right, Sir,” answered the bird. “He is my brother but he has made friends with robbers. He now talks as they do. He doesn’t talk to me any more.” Just then the rishi entered the ashram. 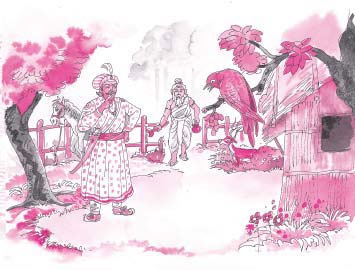 to the king. “Please come inside and make yourself at home. You look tired. Rest for a while. Then you can share my food.”

The king told the rishi the story of the two birds and how each had behaved
so differently though they looked so alike. “The forest is full of surprises,” he said.

The holy man smiled and said, “After all, one is known by the company one keeps. That bird has always heard the talk of robbers. He imitates them and talks about robbing people. This one has repeated what he has always heard. He welcomes people to the ashram. Now, come inside and rest. I’ll tell you more about this place and these birds.”

1. How did the two baby birds get separated?
2. Where did each of them find a home?
3. What did the first bird say to the stranger?
4. What did the second bird say to him?
5. How did the rishi explain the different ways in which the birds behaved?
6. Which one of the following sums up the story best?
(i) A bird in hand is worth two in the bush.
(ii) One is known by the company one keeps.
(iii) A friend in need is a friend indeed.