Class VI NCERT Mathematics Text Book Chapter 3 The Shepherd’s Treasure is given below.

IN a village in Iran there once lived a shepherd. He was very poor. He did not have even a small cottage of his own. He had never been to school or learnt to read and write, for there were very few schools in those days.

Though poor and uneducated, this shepherd was very wise. He understood people’s sorrows and troubles, and helped them face their 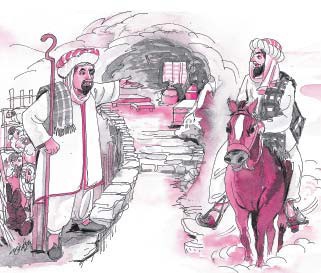 problems with courage and common sense. Many people came to him for
advice. Soon he became famous for his wisdom and friendly nature. The king of
that country heard about him, and thought of meeting him.

Disguised as a shepherd and riding on a mule, one day the king came to the cave where the wise shepherd lived. As soon as the shepherd saw the traveller coming towards the cave, he rose to welcome him. He took the tired traveller inside the cave, gave him water to drink and a share of his own meagre meal. The king rested for the night in the cave and was greatly impressed by the shepherd’s hospitality and wise conversation.

Though still tired, the king decided to depart the next morning. He said, “Many thanks for your kindness to a poor traveller. I have a long way to go. Permit me to leave.”

Looking straight into the eyes of his guest, the shepherd replied, “Thank you, Your Majesty, for paying me the compliment of a visit.”

The king was astonished as well as pleased. ‘He is indeed very wise,’ he thought to himself. ‘I need people like him to work for me.’ And the king appointed this humble shepherd the governor of a small district.

Although he rose to power and dignity, the shepherd remained as humble as ever. People loved and honoured him for his wisdom, sympathy and goodness. He was kind and just to one and all. His fame as a fair and wise governor soon spread throughout the country.

Now the governors of other provinces grew terribly jealous of him and began to talk to the king against him. They said, “He is very dishonest, and keeps for himself part of the money that he collects as tax from the people.” Why did he always carry with him, they added, an iron chest? Perhaps he carried in it the treasure that he had secretly collected. After all, they said mockingly, he was an ordinary shepherd and could behave no better.

At first the king did not pay attention to these reports, but how long could he ignore these governors and their endless stories about the shepherd? One thing was certain, the king discovered. The new governor did carry an iron chest with him all the time.

So, one day, the new governor was summoned to the palace. He came riding on his camel, and to everyone’s delight, the famous iron chest was there fastened securely behind him on the camel’s back.

Now the king was angry. He thundered, “Why do you always carry that iron chest with you? What does it contain?”

The governor smiled. He asked his servant to 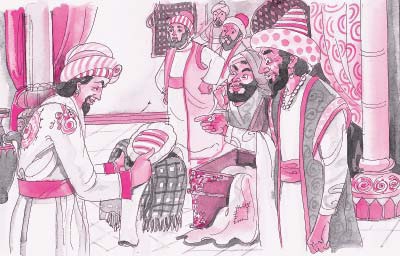 bring in the chest. How
eagerly the people standing around waited for the shepherd to be found out! But how great was their astonishment, and even of the king himself, when the chest was opened! No gold or silver or jewels but an old blanket was all that came out. Holding it up proudly, the shepherd said, “This, my dear master, is my only treasure. I always carry it with me.”

“But why do you carry such an ordinary blanket with you? Surely, you are the governor of a district?” the king asked. To which the shepherd replied with quiet dignity, “This blanket is my oldest friend. It will still protect me if, at any time, Your Majesty should wish to take away my new cloaks.”

How pleased the king was, and how embarrassed the jealous governors became to hear the wise man’s reply! Now they knew that the shepherd was indeed the humblest and the wisest man in the land. The king made him the governor of a much bigger district that very day.

1. The shepherd hadn’t been to school because
(i) he was very poor.
(ii) there were very few schools in those days.
(iii) he wasn’t interested in studies.
Choose the right answer.
2. Who visited the shepherd one day, and why?
3. Why did the other governors grow jealous of the shepherd?
4. Why was the new governor called to the palace?
5. Why was everyone delighted to see the iron chest on the camel’s back?
6. (i) What did the iron chest contain?
(ii) Why did the shepherd always carry it?
(iii) Is it an example of the shepherd’s humility or wisdom or both?
7. How did the king reward the new governor?