Class VI NCERT Mathematics Text Book Chapter 4 – The Old-Clock Shop is given below.

CHRISTMAS Eve had arrived. As last-minute shoppers were going home, a thick, white sheet of snow lay over Salt Lake City, USA. Yet the lights were still burning in the old-clock shop, as Ray, its old, deaf owner, worked on a clock he had sold that day. 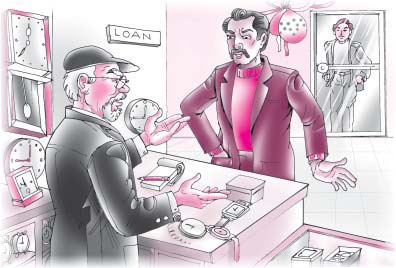 Having finished his work, Ray stood up and was on his way to the back room when a cold rush of air from the front door hit the back of his neck.

He turned to meet a last-minute shopper, but his old, wise eyes told him that this was not a shopper. He saw two men, one in his twenties, the other closer to fifty. The younger man remained at the door. The older man approached the counter with no sign of friendliness in his eyes. Ray was able to hide his growing fear as he slowly pushed a notepad and a pencil across the counter.

He smiled at the unfriendly face, then pointed to his ears and shook his head from side to side. A quick look of surprise changed the man’s face as he studied the notepad, then turned and said something to his friend.

Ray used the chance to look closely at the man, paying attention to the shape of a gun and a restless hand in the man’s right coat-pocket. Anger boiled within him, but it was kept down by an inner voice that said, “Be still.” He wrote on the notepad, “May I help you?” For the first time the older man looked directly at Ray and smiled. A cruel, mocking smile. They both understood why he was there, why his friend remained at the door. They looked like men who were down on their luck, and were now ready to try something they would later be sorry about.

The clocks ticked on. Ray calmly wrote another message. “Have you come to pick up a clock or watch?” Then he pointed to the ‘loan’ board filled with hanging clocks and pocket watches. He was not a pawnbroker, but at the same time couldn’t say ‘No’ to the needy people who placed their old watches or clocks before him for anything they could get. He loaned more than he should. They would be there when the owners wanted them back … at the same price he had paid, with no interest.

Then the older man seemed to feel a little easier, took out his hand from his pocket and quickly looked at the watch on his wrist. “How much will you give me for this?” the man wrote.

Ray noticed a little shame in the grey eyes looking at him. The watch was nothing special and yet had great powers. It was something to exchange, a way out of a bad situation. Knowing that great need had brought the man to his shop in the first place, Ray asked, “How much do you need for it?” The reply came back on the notepad: “Whatever it’s worth.”

Ray reached into his cash-box, pulled out a fifty-dollar note and passed it into the man’s hand. As they shook hands, Ray looked into the man’s eyes; they seemed to say, “Thank 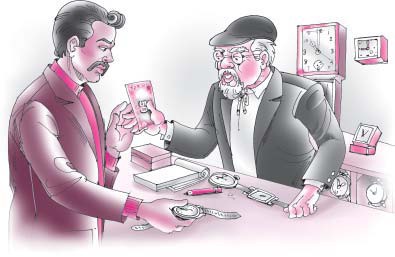 you!” They both knew the watch wasn’t worth that much. Before turning to leave, the man wrote, “I will be back to pick it up as soon as I can. Merry Christmas!”

The little story ended on the half hour with the clocks striking all together. The timepieces, which had been looking on silently all the while, rang out the time with such feeling that even Ray thought he could hear them. Their sweet, musical message was filled with hope. The timeless message of ‘Peace on earth, goodwill towards all’ was felt by the three men who stood in the old-clock shop.

1. What made Ray think the visitor was not really a shopper?
2. Why do you think he had come to the shop?
3. How did Ray communicate with him?
4. What do you think the man said to his friend who waited at the door?
5. Ray was not a pawnbroker. Why then did he lend money to people in exchange for their old watches and clocks?
6. “The watch was nothing special and yet had great powers.” In what sense did it have ‘great powers’?
7. Do you think the man would ever come back to pick up the watch?
8. When did “the unfriendly face” of the visitor turn truly friendly?