YOU may have heard the name of Tansen — the greatest musician our country has produced.

A singer called Mukandan Misra and his wife lived in Behat near Gwalior. Tansen was their only child. It is said that he was a naughty child. Often, he ran away to play in the forest, and soon learnt to imitate perfectly the calls of birds and animals.

A famous singer named Swami Haridas was once travelling through the forest with his disciples. Tired, the group settled down to rest in a shady grove. Tansen saw them.

‘Strangers in the forest!’ he said to himself. ‘It will be fun to frighten them’. He hid behind a tree and roared like a tiger. The little group of travellers scattered in fear but Swami Haridas called them together. “Don’t be afraid,” he said. “Tigers are not always dangerous. Let us look for this one.”

Suddenly, one of his men saw a small boy hiding behind a tree. “There are no tigers here, master,” he said. “Only this naughty boy.”

Swami Haridas did not punish him. He went to Tansen’s father and said, “Your son is very naughty. He is also very talented. I think I can make him a good singer.”

Tansen was ten years old when he went away with Swami Haridas. He lived with him for eleven years, learning music, and became a great singer. At about this time, his parents died. Mukandan Misra’s dying wish was that Tansen should visit Mohammad Ghaus of Gwalior. Mohammad Ghaus was a holy man. Mukandan Misra had long been devoted to him, and often visited him. While living in Gwalior with Mohammed Ghaus, Tansen was often taken to the court of Rani Mrignaini, who was a great musician herself. There he met and married one of the ladies of the court. Her name was Hussaini.

Hussaini also became Swami Haridas’s disciple. Tansen and Hussaini had five children who were all very musical. Tansen had, by this time, become very famous. Sometimes he sang before Emperor Akbar, who was so impressed by him that he insisted Tansen should join his court.

Tansen went to Akbar’s court in 1556, and soon became a great favourite of the Emperor. Akbar would call upon Tansen to sing at any time during the day or night. Quite often he would just walk into Tansen’s house to hear him practise. He also gave him many presents. Some of the courtiers became jealous of Tansen. “We shall never be able to rest till Tansen is ruined,” they declared. One of the courtiers, Shaukat Mian, had a bright idea.

“Let us make him sing Raga Deepak,” he said.

“How will that help us?” asked another man.

“If Raga Deepak is properly sung, it makes the air so hot that the singer is burnt to ashes. Tansen is a very good singer. If he sings Raga Deepak, he will die, and we will be rid of him.”

Shaukat Mian went to Akbar and said, “We don’t think Tansen is a great singer. Let us test him. Tell him to sing Raga Deepak. Only the greatest singers can sing it properly.”

“Of course he can sing it. Tansen can sing anything.” Akbar said. Tansen was afraid, but could not disobey the king. “Very well, my lord,” he said, “but give me time to prepare myself.” Tansen went home. He had never been more downcast and unhappy. “I can sing the Raga,” he told his wife, “but the heat it gives off will not only set the lamps alight, it will also burn me to ashes.”

Then he had an idea. “If someone sings Raga Megh at the same time, and sings it properly, it will bring rain. Perhaps our daughter, Saraswati, and her friend, Rupvati, could do it,” he said.

He taught the two girls to sing Raga Megh. They practised night and day for two weeks. Tansen told them, “You must wait till the lamps start burning, and then you start singing.”

The legend goes that on the appointed day the whole town assembled to hear Tansen sing Raga Deepak. When he began to sing, the air became warm. Soon people in the audience were bathed in perspiration. The leaves on the trees dried up and fell to the ground. As the music continued, birds fell dead because of the heat and the water in the rivers began 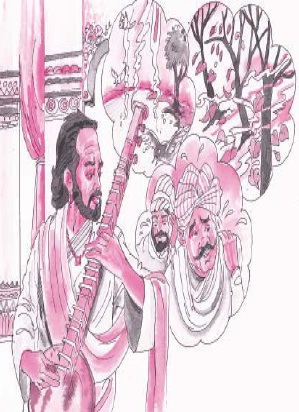 to boil. People cried out in terror as flames shot up out of nowhere and lighted the lamps.

At once Saraswati and Rupvati began to sing Raga Megh. The sky clouded over and the rain came down. Tansen was saved. The story goes that he was very ill after this, and Akbar was sorry that he had caused him so much suffering. He punished Tansen’s enemies. When Tansen got well, the entire city rejoiced. Tansen remained Akbar’s court singer till 1585 when he died. He composed several new ragas.

Tansen’s tomb is in Gwalior. It is a place of pilgrimage for musicians.

1. Why did Swami Haridas say Tansen was ‘talented’?
2. Why did Akbar ask Tansen to join his court?
3. How do we know that Akbar was fond of Tansen? Give two reasons.
4. What did the other courtiers feel about Tansen?
5. (i) What happens if Raga Deepak is sung properly?
(ii) Why did Tansen’s enemies want him to sing the Raga?
6. Why did Tansen agree to sing Raga Deepak?
7. (i) What steps did he take to save himself?
(ii) Did his plan work? How?