Class VI NCERT Mathematics Text Book Chapter 6 The Monkey and the Crocodile is given below.

ONCE, on the bank of a river, a monkey made a home for himself in a tree laden with fruit. He lived in it happily eating to his heart’s content the fruit of his choice.

The monkey was happy but lonely and wanted a companion to talk to and share the fruits with. But there was no one around, not even another monkey, till one day a crocodile appeared on the riverside.

“Hello, there,” said the monkey. “Do you live in this river? Would you like to eat some fruit?”

“Good morning,” replied the crocodile politely. “I did come here in search of food for myself and my wife. Nice of you to offer me fruit.”

The monkey plucked some from the nearest branch and threw them down. The crocodile found them delicious.

“Certainly, as many as you like and some for your wife too,” said the monkey. “Do come again. I’m rather lonely here.”

The crocodile visited the monkey regularly and ate the fruits which his host threw down. He took some home for his wife. The monkey and the crocodile were now the best of friends. They talked and were never tired of talking. They talked about birds and animals, about the villages nearby and the difficulties villagers faced in raising good crops for lack of rain.

One day, the crocodile stayed with the monkey longer than usual. His wife was annoyed waiting and waiting managing the little crocodiles that had just been hatched. She said, “Who is this friend of yours you are so fond of?”

“Oh, he is a very nice monkey,” he replied. “He lives on a fruit-tree. He sends fruits for you everyday. You don’t expect me to climb trees, do you?”

“A nice monkey, I’m sure,” replied the wife with obvious sarcasm. “If you ask me, this monkey should be my food. I want to eat his heart so much.”

“What a foolish thing to say!” shouted the crocodile. “I can’t kill a friend, though I won’t mind a monkey occasionally for a change of taste.”

“You bring him here,” ordered the wife. “I want to see him.”

“So you can eat him. Never!” declared her husband.

His wife was furious and she dived in to hide herself at the bottom of the river leaving the little ones to pester their father. The crocodile was in a serious dilemma. He loved his wife and was very fond of his friend too. Finally, he decided to be on the side of his wife. She was his life-partner after all. ‘I know it’s a sin to betray a friend, but I have no choice,’ he said to himself. ‘I’ll invite the monkey home and hope for the best.’

“My wife wants you over for a meal, dear friend,” said the crocodile when he visited the monkey next. “You must come home with me today.”

“With pleasure,” said the monkey. “I’m no swimmer, but can ride on your back.” And they set out.

In the middle of the river, where the current was the strongest, the crocodile could no longer hide his intention. “Sorry, my friend,” he said hesitatingly, “but I have to go under water now. I’ve brought you here to kill you. My wife cannot survive without eating your heart. Good bye.”

The monkey was scared and distressed. But he was sensible and clever like all monkeys. He kept a cool head. Calmly he said, “I’d do anything for you and your family. You are my only friend. After all, what is a monkey’s heart compared with the life of a crocodile’s wife? But how foolish could you be? Why didn’t you tell me before? I’d have brought my heart along.”

“But where is your heart?” asked the crocodile innocently.

“I thought you carried it all the time.”

“Of course not. It’s there on the tree. Let’s swim back at once and get it. Your wife must be waiting,” replied the monkey gaining confidence.

“Oh dear! What a mistake!” hissed the crocodile. They laughed loudly as the crocodile took a full turn to reach the tree. 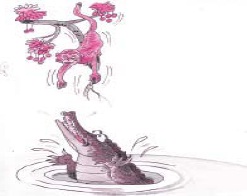 On the river-bank, the monkey jumped on to the tree and heaved a deep sigh of relief. He plucked a fruit or two from the nearest branch and throwing them down said, “Let your
wife have some fruit rather than my heart. Fresh fruits are good for mind and body. Good bye, friend, and if you don’t mind, we won’t meet again.” The crocodile, sadder and wiser, shed
a few tears which were genuine and turned back to go home. He was in a hurry to tell his wife a thing or two.

(a story from The Panchatantra)