Class VI NCERT Mathematics Text Book Chapter 8 A Pact with the Sun is given below.

SAEEDA’S mother had been ailing for a long time—fever, cough, body-ache, painful joints and what not. Treated by a variety of physicians for weeks, she often showed signs of improvement but soon relapsed into her old, sick self, one complaint substituted by another. Though weak and colourless, she was forbidden normal food and was under strict orders to remain perpetually confined to her small, dingy room with doors and windows fastened, deprived of sunshine and fresh air.

When she became critical, her relatives and neighbours persuaded her to consult a specialist even though his fee was likely to be high. Life is more precious than money, they said. Saeeda’s mother was poor but she heeded their advice and sold a few trinkets to pay the doctor’s fee and the cost of medicine.

The doctor came in a few days and examined her and prescribed effective but costly medicine. To the question as to what she should eat he said, “Anything you wish to eat — chapati, vegetables, milk, fruits, etc. In addition to all this,” he added emphatically, “leave this dark hovel and occupy a bigger room with doors and windows open. Sit in the sun every morning from eight to nine. Sunshine and fresh air,” he concluded, “are more important than medicine.”

The doctor and his advice became a subject of noisy commentary among all present. Some favoured while others opposed it. Exposure to sun and air for someone afflicted with chronic cough was dangerous, an experienced lady declared. A younger neighbour nearly quarrelled with her over this. Too exhausted to participate in the debate, Saeeda’s mother remained quiet but determined to follow the doctor’s advice.

“Forget the consequences,” she said at last. “I’ll carry out his instructions to the letter. Move my bed into the next room and let me sit in the sun on my charpoy for an hour daily.”

It so happened that the sky remained overcast next morning. The same was the case the following day. Saeeda’s mother was dejected. She muttered, “O Lord of mine, why have you ordered the sun to remain hidden? How will I ever be cured?”

Saeeda was playing with her doll nearby and she heard her mother’s lament but kept calm. Later in the afternoon, when she stumbled on a spot of pale sunshine in the courtyard, she ran to her mother to say the sun was there. “No, no”, said everybody present. “It’s too late and chilly. Your mother can’t sit out there.” Disheartened, Saeeda returned to her doll. There was no sun really except for its last remnant entangled in the top branches of the family mango tree.

Now, children have at their command a secret language, foreign to grown-ups altogether, in which they fluently communicate with trees, flowers, animals, the sun and the moon, perhaps even with the Almighty. Using that special language, Saeeda addressed her remark to the last departing ray of the sun. “Dearest sister, do come tomorrow with lots of warmth and brightness. You see, my mother is ill and needs your help.” 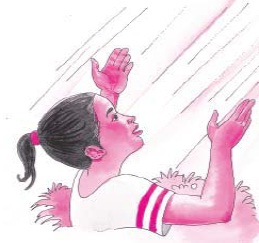 Next day, early in the morning, when the sprightly sunrays embellished themselves for their journey down to earth, the sun said, “It’s our day off again. We’re staying up here. The road to earth is blocked by an army of thick, mucky clouds.” The little rays so much wanted to go down for a lark but they remained quiet. One of them, though, who had made a pact with little Saeeda said, “Sir, I can’t stay back. I’ve given my word to Saeeda whose mother is ill and needs our help. I’ll pierce through the clouds to reach Saeeda’s courtyard. How else will her mother be cured?” Hearing this, all the rays nearly staged a revolt against their father, the sun. “Fancy staying back again,” they said in a single voice. “What will the people of the earth say about us? That we of the heavens have turned liars?”

The sun relented. “Please yourselves,” he said. “Mind your clothes, though. The clouds are mucky.”

“Never mind our clothes. We can always change. But go we must.” And the rays rushed towards the earth. The clouds stood guard between them and Saeeda’s courtyard. The little rays focussed their heat — and they had enough of it — on a battalion of clouds, which had to flee from its post. The rays got through, shooting past the bewildered clouds. They were already late. 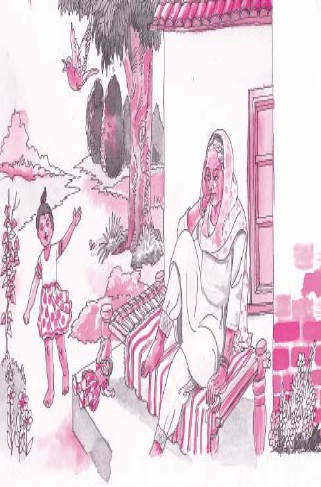 Saeeda saw the whole host of them approaching and her heart leapt with joy. She shouted, “Amma, Amma! The sun is here. Come out.” The old lady’s eyes welled up with tears of gratitude. Her charpoy was placed in the courtyard and she sat on it for an hour reclining against bolsters. It had been months since she had felt the sun on her hands and face and breathed in fresh air. She thought she was in a new world. Though pale, her face glowed and her eyes shone bright. She saw her child too bathed in sunlight and kissed her. The morning air brought in a new fragrance from nearby flowers. The birds chanted a new tune. Saeeda’s mother felt better already.

She is fully recovered now, but she still follows the doctor’s advice — an hour of sunlight and lungfuls of fresh air every day.

ZAKIR HUSAIN
[translated from the Urdu and
slightly modified]

1. What did the physicians ask Saeeda’s mother to do to get well? Did their advice help her? If not, why not?
2. What did the specialist prescribe in addition to medicine?
3. What did Saeeda tell the sunrays to do?
4. Why were the sunrays keen to go down to the earth the next day?

What is your own formula for keeping good health?

Who would you recommend to a patient in your neighbourhood — the physicians contacted first or the specialist contacted next? Give reasons for your choice. When would you make a pact with the sun? When you are going on a picnic, or when you are playing a cricket match? Think of other occasions.