Solids are the chemical substances which are characterised by define shape and volume, rigidity, high density, low compressibility. The constituent particles (atoms, molecules or ions) are closely packed and held together by strong interparticle forces

The solids are of two types : Crystalline solids and amorphous solids.

Distinction Between Crystalline and Amorphous Solids 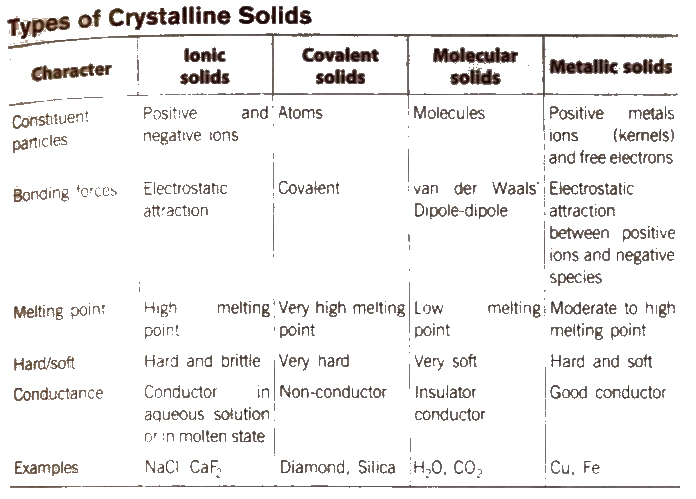 When a beam of X-rays falls on a crystal plane composed of regularly arranged atoms or ions, the X-rays are diffracted. If the waves are in phase after reflection, the difference in distance travelled by the two rays ti.e., path difference) must be equal to an integral number of Wavelength, nλ for constructive. 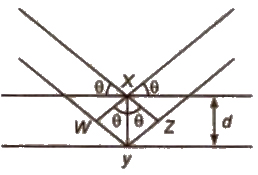 This equation is called Bragg’s equation.

θ = angle at which interference occurs.

The smallest geometrical portion of the crystal lattice which can be used as repetitive unit to build up the whole crystal is called unit cell.

(i) Simple or primitive Unit cell In which the particles are present at the corners only. 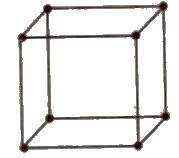 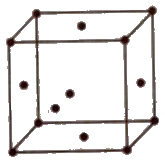 (iii) Body centred unit cell In which the particles are present at the corners as well as at the centre of the unit cell. 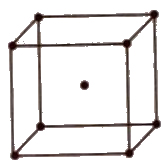 (iv) End centred unit cell In which the particles are present at the corners and at the centre of two opposite faces. 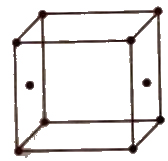 Number of Particles Per Unit Cell

There are about 230 crystal forms, which have been grouped into 14 types of space lattices, called Bravais Lattices, on the basis of their symmetry and seven different crystal systems on the basis of interfacial angles and axes. 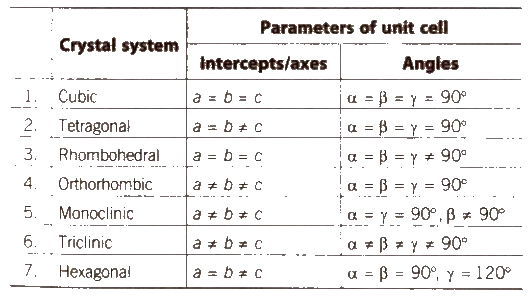 (i) Primitive cubic unit cell Atoms touch each other along edges.

It is defined as the number of particles immediately adjacent to each particle in the crystal lattice.

(i) Square close packing Space occupied by spheres is 52.4%.

Void or Space or Holes

where, d = density of unit cell

Z = no. of atoms per unit cell

a = edge length of unit cell.

The Structure of Ionic Crystals

The ionic radius ratios of cation and anion, play a very important role in giving a clue to the nature of the crystal structure of ionic substances.

Ionic crystals may be of two types

Point defects are the irregularities or deviations from ideal arrangement around a point or an atom in a crystalline substance Point defects can be classified into three types : (1) psychometric defects (2) impurity defects (3) non–stoichiometric defects

These are point defects that do not disturb’ the -stoichiometric of the solid. They are also called intrinsic or thermodynamic defects. In ionic solids, basically these are of two types, Frankel defect and Schottky defect

Non-stoichiometric crystals are those which do not obey the law of constant proportions. The numbers of positive and negative ions present in such compounds are different from those expected from their ideal chemical formulae. However, the crystal as a whole in neutral.

Types of n-stoichiometric defects are as follows:

(i) Met excess defect Metal excess defect due to anionic vacancies: Alkyl halides like NaC1 and KCl show this type of defect. centres ale the sites from where anions are missing and the vacant sites are occupied by electrons. F-centres contribute colour and paramagnetic nature of the crystal [F stands for
German wo\d Farbe meaning colour).

Metal excess defect due to presence of extra cations at interstitial sites, e.g., zinc oxide is white in colour at room temperature. On beating, it loses oxygen and turns yellow.

(ii) Metal deficiency defect due to cation vacancy It is due to the absence of a metal ion from its lattice site and charge is balanced by ion having higher positive charge. Transition metals exhibit this defect, e.g., FeO, which is found in the composition range from Fe0.93 O to Fe0.96O.

In crystal of FeO, some Fe2+cations are missing and the loss of positive charge is made up by the presence of required number of Fe3+ ions.

Classification of Solids on the Basis of Electrical Conductivity 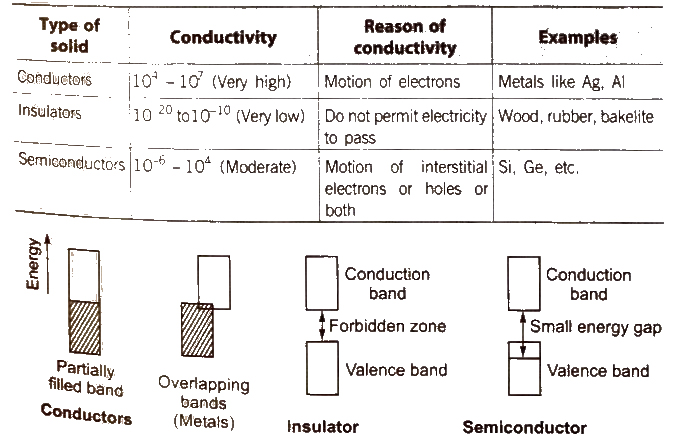 [The electricity produced on heating a polar crystal is called ‘pyroelectricity’.]

When mechanical stress is applied on polar crystals, electricity produced due to displacement of ions is called ‘piezoelectricity’

Their conductivity is due to the presence of impurities. They are formed by doping. It is defined as addition of impurities to a semiconductor to increase the conductivity. Doping of Si or Ge is carried out with P, As, Sb, B, Al or Ga.

Solids can be divided into different classes depending on their response to magnetic field.

These are weakly repelled by the magnetic field and do not have any unpaired electron, e.g., TiO2, V2O5, C6H6, NaCI, etc.

These are attracted by the magnetic field and have unpaired electrons These lose magnetism in the absence of magnetic field, e.g., O2, Cu2+, Fe3+, etc.

These substances have a net dipole moment due to unequal parallel and anti-parallel alignment of magnetic moments, e.g., Fe3O4, ferrites, etc.