It is defined as the attractive forces which hold the various chemical constituents (atoms, ions, etc.) together in different chemical species.

Bond forms to get the stability. with a release of energy.

According to this theory. atoms take part in the bond formation to complete their octet or to acquire the electronic configuration of the nearest inert gas atoms (Octet rule). This can be achieved by gaining, losing or sharing the electrons.

Valence electrons are reported by dots around the chemical symbol of element, e.g.,

A chemical bond formed by complete transference of electrons from one atom (metal) to another (non-metal) and hence, each atom acquire the stable nearest noble gas configuration, is called ionic bond or electrovalent bond, e.g., formation of sodium chloride

Favourable factors for the formation of ionic bonds

(i) Metal should have lowest ionisation enthalpy.

(iii) The energy released during the formation of 1 mole of crystal lattice, i.e., lattice enthalpy must be high.

[Some elements exhibit variable electrovalency. The reason for this iS unstable configuration of penultimate orbit and inert pair effect].

4. Ionic compounds are good conductor in molten state and in aqueous solution.

This cycle is based upon the fact that the formation of an ionic compound may occur either by direct combination of the elements or by an alternate process in which :

1. The reactants (metal) are vaporised to convert into gaseous state.

2. The gaseous atoms are converted into ion.

3. The gaseous ions are combined to form ionic lattice of molecule. e.g., formation of NaCI can be shown as 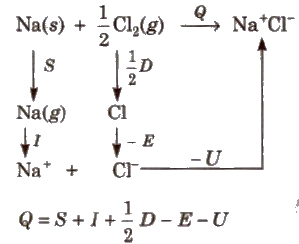 where, S = enthalpy of sublimation

1. Write the symbol of cation at the left and anion at the right.

2. Write their electrovalencies in figures on the top of each symbol as AXBY.

3. Divide their valencies by HCF.

In covalent bonding, the shared pairs of electrons present between the atoms are called bond pairs while unshared pairs or non-bonding electron pairs are known as lone pairs.

1. In general, covalent compounds exist in the liquid or gaseous state at room temperature due to magnitude of intermolecular forces.

3. Covalent compounds are generally poor conductors of electricity because they do not contain free electrons or ions to conduct electricity.

4. They are soluble in non-polar solvents like benzene but usually insoluble in water.

According to Octet rule during the formation of a covalent bond, the atom attain an inert gas electronic configuration (valence shell contains 8e– or shell is completely filled). An atom may attain this configuration by gaining, losing or sharing electrons with other atoms

Exceptions of the Octet Rule

(i) Incomplete octet of the central atom, e.g., LiCl, BeH2 and BCl3

Formal Charge on an Atom in a Molecule/Ion

Formal charge (F.C) on an atom in a Lewis structure

= [total number of valence electrons in the free atom]

Hence, O3 along with the formal charges can be represented as follows

In a covalently bonded molecule having more than two atoms, the bonds form an angle with each other, which is known as bond angle. In general an increase in the size of central atom decreases the bond angle. Factors affecting bond angle (i) Lone pair repulsion (ii) hybridisation of central room.

It is determined by X-rays diffraction method.

It is defined as the number of covalent bonds present in a molecule.

If bond order comes out to be zero, the molecule does not exist.

The bond enthalpy and bond dissociation enthalpy are equal in magnitude and opposite in sign.

[Bond dissociation enthalpy is determined by thermal or spectroscopic methods.]

It is defined as the product of the magnitude of the charge and the distance between the centres of positive and negative charge.

where, c is coulomb and m is meter.

(The shift in electron density is symbolised by broken arrow)

1. Dipole moment is helpful in predicting the geometry of the molecule.

where, XA and XB are the electronegativities of atoms.

Percent ionic character can also be calculated by dipole moment as

5. Dipole moment is greatest for ortho isomer, zero for para isomer and less than that of ortho for meta isomer.

The partial covalent character of ionic bonds was discussed by Fajan’s in terms of following rules :

Resonance stabilises the molecule as the energy of the resonance hybrid is less than the energy of any single canonical structure.

Resonance averages the bond characteristics as a whole.

According to this theory,

1. The geometry of a molecule or ion depends on the number of electron pairs in the valence shell of its central atom.

2. To attain minimum repulsive state electron pairs try to stay as far away as possible.

3. If the central atom is surrounded by only bonded electron pairs of similar atoms, the repulsive interactions are similar and the moleCular geometry is regular.

4. If the central atom is surrounded by only bonded electron pairs of dissimilar atoms, the repulsive interactions are not equivalent and hence. the geometry of molecule will not be regular.

5. If the central atom is surrounded by both bonded pairs (bp) as well as lone pairs (lp) of electrons. repulsive interactions are not equivalent and hence, geometry of the molecule will be irregular.

The repulsive interactions decrease in the order 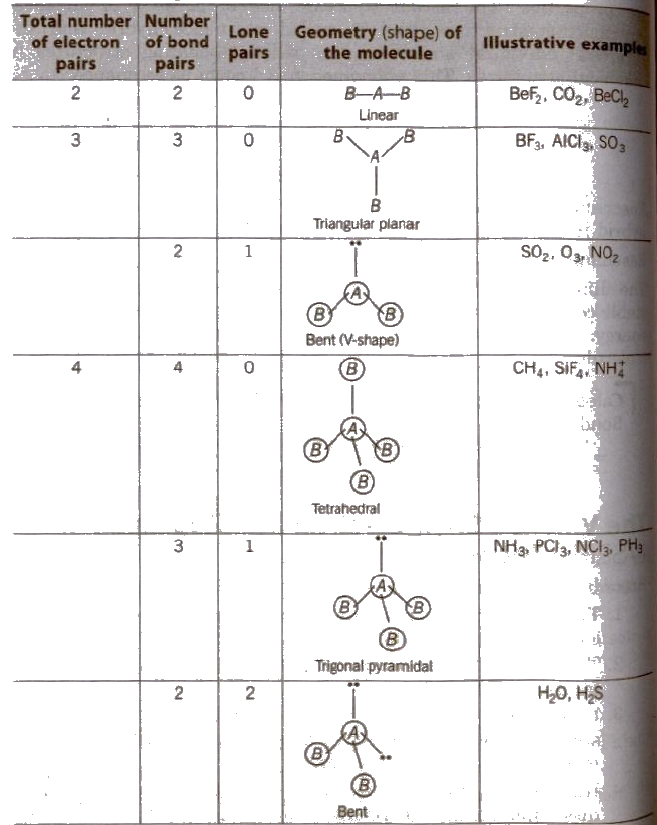 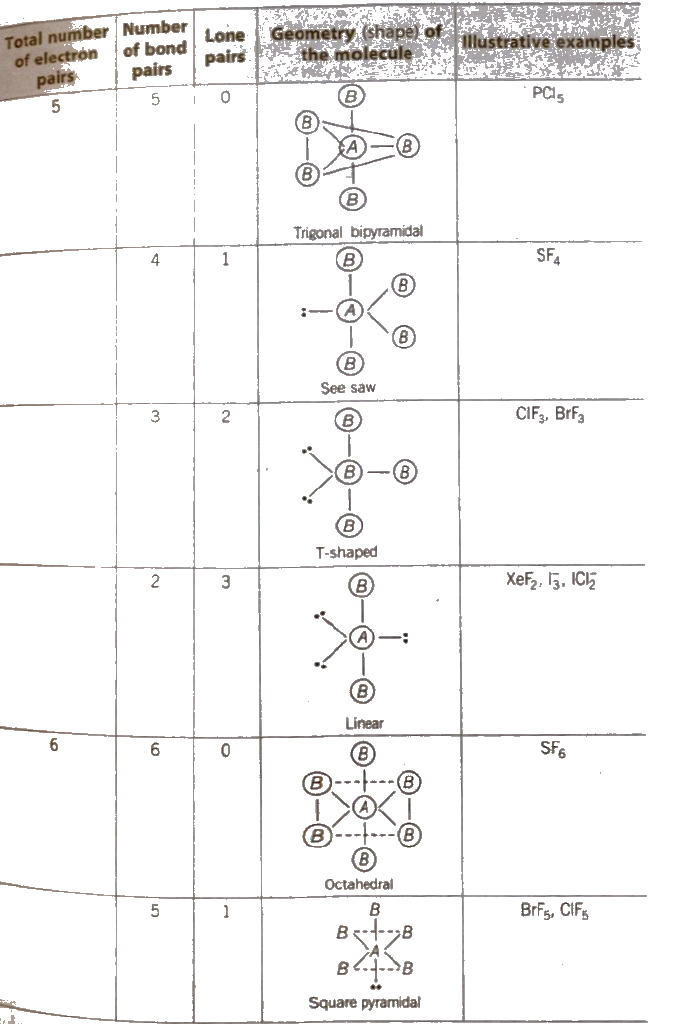 According to this theory, a covalent bond is formed by the overlapping of two half-filled atomic orbitals having electrons with opposite spins. It is based on wave nature of electron.

The following result in the formation of σ bond.

π bond is a weaker bond than σ bond.

Comparison of Sigma and Pi Bonds

1. The magnetic properties. of some molecules. It fails to explain.

It is defIned as the mixing of the atomic orbitals belonging to the same atom but having slightly different energies so that a redistribution of energy takes place between them resulting in the formation of new orbital of equal energies and identical shapes. The new orbitals thus formed are known as hybrid orbitals and are more stable,

Method for Finding the Hybridisation

Apply tho following formula to find the hybridisation of central atom.

Some Common Types of Hybridisation with Shapes and Examples 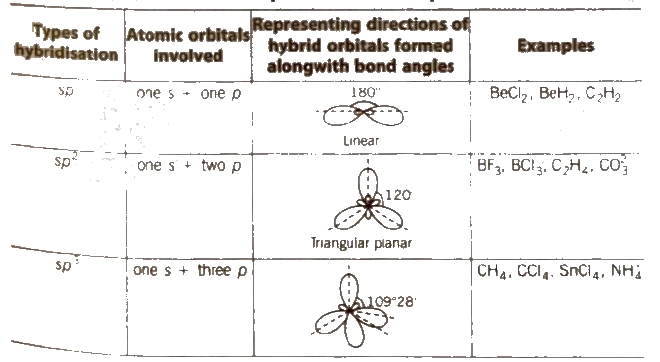 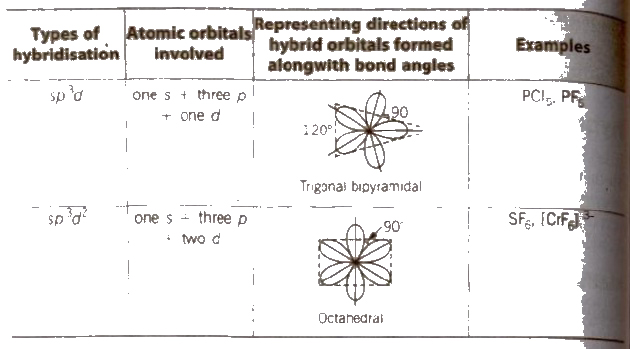 It is a type of covalent bond in which the electron pair (lone pair) is donated by one atom but shared by both the atoms so as to complete their octets. e.g.,

1. The molecular orbitals are formed by LCAO (Linear combination of atomic orbitals) method, i.e., by addition or subtraction of wave functions of individual atoms, thus

4. The shape is governed by the shape of atomic orbitals, e.g., s-s and p-p overlapping.

(i) Combination between s-atomic orbitals 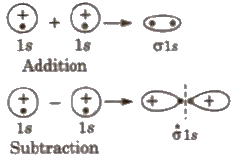 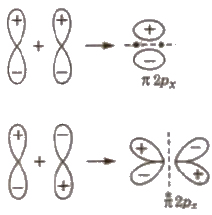 2 py atomic orbitals will also overlap in the same way and thus, resulting molecular orbitals are π 2 py and π 2 py.

[Molecular species having unpaired electrons are paramagnetic, while if all the electrons in the orbitals are paired then the molecule is diamagnetic.]

It is defined as the force of attraction existing between hydrogen atom covalently bonded to highly electronegative atom (N, O or F) and the electronegative atom belonging to another molecule of the same or different substance. It is represented by dotted lines. The chains possess a zig – zag structure.

(Hydrogen bond is purely electrostatic and a weak bond. The strength of the strongest hydrogen bond is about 5-10 kcal per mol. The more the electronegativity of atom involved in H-bonding, the more is the bond strength, e.g.,

Types of hydrogen bonds are

In meta and para isomer chelation is not possible due to the formation of desired size of ring.

Metallic bond is the force of attraction between a metal ion to a number of electrons within its sphere of influence. Electron-sea theory of metallic
bond explains number of the properties of the metal