The branch of science which deals with the quantitative relationship between heat and other forms of energies is called thermodynamics.

(i) System It refers to the part of universe in which observations are carried out.

(ii) Surroundings The part of universe other than the system is known as surroundings.

(ill) Boundary The wall that separates the system from the surroundings is called boundary.

(i) Open system The system in which energy and matter both can be exchanged with the surroundings.

(ii) Closed system The system in which only energy can be exchanged with the surroundings.

(iii) Isolated system The system in which neither energy nor matter can be exchanged with the surroundings.

Properties of the system which depend only on the nature of matter but not on the quantity of matter are called Intensive properties, e.g., pressure, temperature, specific heat, etc

Properties of the system which are dependent on the quantity of matter are called extensive properties, e.g., internal energy, volume, enthalpy, etc.

When microscopic properties have definite value, the conditions of existence of the system is known as state of system.

State functions When values of a system is independent of path followed and depend only on initial and final state, it is known as state function,e.g., Δ U, Δ H, Δ G etc.

Path functions These depend upon the path followed, e.g., work, heat, etc.

It is the operation which brings change in the state of the system.

(iv) Adiabatic process In which heat is not exchanged by system with the surroundings, i.e., (Δq = 0).

(v) Cyclic process It is a process in which system returns to its original state after undergoing a series of change, i.e., Δ U cyclic = 0; Δ H cyclic = 0

(vi) Reversible process A process that follows the reversible path, i.e., the process which occurs in infinite number of steps in this Way that the equilibrium conditions are maintained at each step, and the process can be reversed by infinitesimal change in the state of functions.

(vii) Irreversible process The process which cannot be reversed and amount of energy increases. All natural processes are Irreversible.

Internal Energy (E or U)

It is the total energy within the substance. It is the sum of many types of energies like vibrational energy, translational energy. etc. It is a extensive property and state function.

U depends on temperature, pressure, volume and quantity of matter.

Energy can neither be created nor destroyed although it can be converted from one form to the other.

Modes of Transference of Energy

It occurs when there is a difference of temperature between system and surroundings. It is a random form of energy and path dependent. Its units are joule or calorie.

If the system involves gaseous substances and there is a difference of pressure between system and surroundings. work is referred as pressure – volume work (WpV).

(v) When an ideal gas expands in vacuum then

Work and heat both appear only at the boundary of the system during a change in state.]

Heat Capacity of a System

Heat Capacity (c) of a system is defined as the amount of heat required to raise the temperature of a system by 1° C.

It is the heat capacity 1 mole of substance of the system.

where, m = mass of substance

It is the sum of internal energy and pV-energy of the system. It is a state function and extensive property. Mathematically,

Like U. absolute value of H also cannot be known, ΔH is determined experimentally.

Relationship between ΔH and ΔU

Here, Δn(g) = change in the number of gas moles.

Enthalpy or Heat of Reaction (ΔrH)

It is the change in enthalpy that accompanies a chemical reaction represented by a balanced chemical equation.

(i) Physical state of reactants and products.

Various Forms of Enthalpy of Reaction

It is heat change when one mole of compound is obtained from Its constituent elements.

It is the Enthalpy change taking place when one mole of a compound undergoes complete combustion In the presence of oxygen (ΔHc.)

ΔHc because process of combustion is exothermic.

It is the Enthalpy change when one mole of a substance is dissolved in large excess of solvent, so that on further dilution no appreciable heat change occur.

It is the enthalpy change when one mole of anhydrous substances undergoes complete combustion. It is an exothermic process.

It is the enthalpy change that accompanies melting of one mole of solid substance.

It is the enthalpy change that accompanies conversion of one mole of liquid substance completely into vapours.

Enthalpy of neutralisation of strong acid and strong base is always constant, i.e., 57.1 kJ.

It is the enthalpy change when one mole of the substance undergoes transition from one allotropic form to another.

It is the enthalpy change occurring when one mole of the molecule breaks into its atoms.

It is the enthalpy change, when one mole of a substance is diluted from one concentration to another.

It is the enthalpy change, when one mole of a solid substance sublines.

It is the enthalpy change, when one mole of an ionic compound dissociates into its ions in gaseous state.

According to Hess’s law

Applications of Hess’s law are

(a) In determination of beat of formation.

(b) In determination of heat of transition.

(c) In determination of heat of hydration.

According to this law, “The ratio of enthalpy of vaporization and normal boiling point of a liquid IS approximately equal to 88 J per mol per kelvin. i.e.,

This law states “The product of specific heat and molar mass of any metallic element is equal to 6.4 cal/ mol/ °C. i.e.,

where, ΔHv = molar heat of vaporisation.

It is the average amount of energy required to break one mole of bonds in gaseous molecules.

The energy required to break the particular bond in a gaseous molecule is called bond dissociation enthalpy. It is definite in quantity and expressed in kJ mol-1.

(i) Size of atoms

It is the measurement of randomness or disorder of the molecules. It is a state function and extensive property.

The change in entropy during a process is mathematically given as

Where, qrev heat absorbed by the system in reversible manner

Entropy of even elementary substances are not zero.

Entropy change of an ideal gas is given by

The change of matter from one state to another state is called phase transition.

The entropy changes at the time of phase transition: 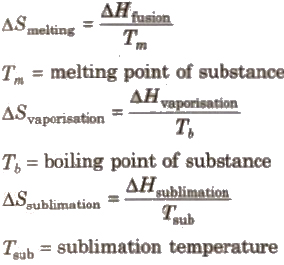 The physical or chemical process which proceeds by its own in a particular direction under given set of conditions without outside heir is called spontaneous process. It cannot be reversed.

All natural processes are spontaneous process.

Spontaneous process where no initiation is needed

(i) Sugar dissolves in water.

Spontaneous process where some initiation is required

(i) Coal keeps on burning once initiated.

(ii) Heating of CaCO3 to give calcium oxide and CO2 is initiated by heat.

All the processes which are accompanied by decrease of energy (exothermic reactions, having negative value of ΔH) occur spontaneously.

It fails when some endothermic reactions occur spontaneously.

A process is a spontaneous if and only if the entropy of the universe increases.

For a process to be Spontaneous

Limitations of ΔS criterion and need for another term We cannot find entropy change of surroundings during chemical changes. So we need another parameter for spontaneity viz Gibbs’ energy of system (G).

The entropy of the universe is always Increasing in the course of every spontaneous or natural change.

All spontaneous processes or natural change are thermodynamically irreversible without the help of an extemal work. i.e., heat cannot flow itself from a colder to hotter body.

The phenomenon of cooling of a gas when it is made to expand adiabatically from a region of high pressure to a region of extremely. low pressure is known as Joule-Thomson effect. This effect is zero when an ideal gas expands in vacuum.

[When an ideal gas undergoes expansion under adiabatic condition in vacuum, no change takes place in its internal energy, i.e., (∂E / ∂V)T = 0 where, (∂E / ∂V)T is called the Internal pressure.]

The number of degrees of temperature change produced per atmospheric drop in pressure at constant enthalpy when a gas is allowed to expand through a porous plug is called Joule-Thomson coefficient. It is given as

The temperature below which a gas becomes cooler on expansion is known as the inversion temperature. It is given as

where, a and b = van der Waals’ constant

At inversion temperature Ti, the the Joule Thomson coefficient μ = 0, i.e., the gas neither heated nor cooled.

It is an imaginary cycle which demonstrates the maximum conversion of heat into work. It involves four processes

The efficiency of a heat engine in a Carnot cycle,

It is the energy available for a system at some conditions and by which useful work can be done. It is a state function and extensive property.

Change in Gibbs energy during the process 1S given by Gibbs Helmholtz equation.

The Gibbs energy criterion of spontaneity

ΔG = 0, process is in equilibrium state

Effect of Temperature on Spontaneity 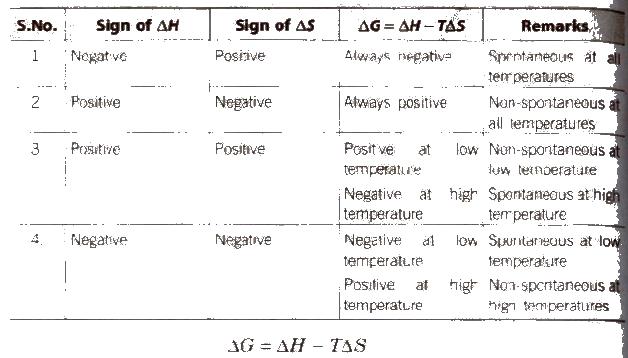 It is the change in free energy which takes places when the reactants are converted into products at the standard states, i.e., (1 atm and 298 K)

where, ΔG°f = standard energy of formation

Standard energy of formation of all free elements is zero.

⇒ We also know that

Relation between ΔG° and EMF of the Cell

This law was formulated by Nernst in 1906. According to this law, “The entropy of a perfectly crystalline substance at zero K or absolute zero is taken to be zero”. We can find absolute entropies of pure substances at different temperature.

This law is on1y applicable for perfectly crystalline substances. If there is imperfection at 0 K, the entropy will be larger than zero.