Physical processes involve such changes, which only affects the physical properties of the substance undergoing changes but have no effect on the chemical composition and properties.

Chemical processes involve changes in chemical composition and properties. Whenever a chemical change occurs, we can say that a chemical reaction has taken place.

In such reactions two or more substances combine to form a single compound.

In these reactions. a compound decomposes to produce two or more different substances.

Digestion of food is also a decomposition reaction.

These reactions involve displacement of one element or group by another. These are infact, redox reactions, e.g.,

Under given set of conditions if a reversible process or chemical reaction is carried out in a closed container, a constancy in some observable properties like colour intensity, pressure, density, is observed. Such a state is referred to as an equilibrium state.

Equilibrium may be classified as :

Rate of melting of ice = Rate of freezing of water 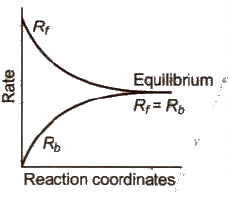 1. Equilibrium can be attained from either side.

2. Equilibrium is dynamic in nature, i.e., at equilibrium reaction does not stop.

3. At equilibrium, there is no change in the concentration of various species.

6. The observable physical properties of the process become constant.

Guldberg and Waage states that the rate of a chemical reaction is directly proportional to the product of the active masses of the reacting substances. For a general reaction,

where, kf and kb are rate constants.

In heterogeneous equilibrium, the active mass of pure solids and liquids are taken as

Kc is called the equilibrium constant.

Use of Partial Pressures Instead of Concentration

Relation between Kc and Kc

where, Δng = moles of products – moles of reactants (gaseous only)

Relation between Kc and Kp for different types of reactions

Units of Kp and Kc

1. It has definite value for every chemical reaction at a particular temperature.

2. The more is the value of Kc or Kp, the more is the extent of completion of reaction, i.e., Kc < 1 indicates lesser concentration of products than reactants.

K ≥ 103 shows completion of reaction and K ≤ 10-3 shows that the reaction does not proceed at all.

3. When the reaction can be expressed as sum of two other reactions, the Kc of overall reaction is equal to the product of equilibrium constants of individual reactions.

4. The equilibrium constant is independent of initial concentrations of reactants.

5. Equilibrium constant is independent of presence of catalyst.

7. If an equation is multiplied by n, the K becomes Kn, and if it is divided by m, the k becomes m √k.

8. In equilibrium constant expression if activities are used in places of molar concentration, h becomes dimensionless.

In homogeneous equilibrium, the reactants and products arc present in the same phase or physical suite (gaseous or liquid).

In heterogeneous equilibrium the reactants and products are present in two or more physical states or phases.

For any reversible reaction at any stage other than equilibrium, the ratio of the molar concentrations of the products to that of the reactants. where each concentration term is raised to the power equal to the stoichiometric coefficient to the substance concerned, is called the reaction quotient, Qc.

For a general reaction

which is not at equilibrium,

(i) Qc > Kc, the value of Qc will tend to decrease to reach the value of Kc (towards equilibrium) and the reaction will proceed in the reverse direction.

(ii) Qc < Kc it will lend to increase and the reaction will proceed in the forward direction.

(ii) Qc = Kc, the reaction is at equilibrium.

There are three main factors which affect the state of equilibrium.

Le – Chatelier’s principle states that if a system at equilibrium is subjected to a change in concentration. pressure or temperature. the equilibrium equilibrium change.

Effect of Change of Concentration

If at equilibrium the concentration of one of the reactants is increased. the equilibrium will shift in the forward direction and vice-versa.

Effect of Change in Pressure

No effect of pressure on equilibria having same moles of reactants and products. e.g., N2 + O2 ⇔ 2NO.

When there is change in the number of moles, the equilibrium will shift in the direction having smaller number of moles when the pressure is increased and vice-versa, e.g.,

Effect of Addition of Inert Gas

(ii) Addition of inert gas at constant volume If keeping volume of the system constant, an inert gas is added. the relative molar concentration of the substance will not change. Hence. the equilibrium position of the reaction remains unaffected.

(i) Effect of pressure on solubility The increased pressure, will increase the solubility of gas and vice-versa.

(iii) Effect of pressure on the melting point of ice

The ice occupy the more volume than liquid water, so increased pressure will result in melting of ice according to Le-Chatelier principle.

Favourable conditions for some chemical equilibria to get higher yield of product.

Calculation of the Degree of Dissociation (α) from Density Measurement