Before you read
A king has three questions and he is seeking answers to them. What are the questions? Does the king get what he wants?

he thought came to a certain king that he would never fail if he knew three things. These three things were: What is the right time to begin something? Which people should he listen to? What is the most important thing for
him to do?

The king, therefore, sent messengers throughout his kingdom, promising a large sum of money to anyone who would answer these three questions.

Many wise men came to the king, but they all answered his questions differently.

In reply to the first question, some said the king must prepare a timetable, and then follow it strictly. Only in this way, they said, could he do everything at its proper time. Others said that it was impossible to decide in advance the right time for doing something. The king should notice all that was going on, avoid foolish pleasures, and

always do whatever seemed necessary at that time. Yet others said that the king needed a council of wise men who would help him act at the proper time. This was because one man would find it impossible to decide correctly, without help from others, the right time for every action.

But then others said that there were some things which could be urgent. These things could not wait for the decision of the council. In order to decide the right time for doing something, it is necessary to look into the future. And only magicians could do that. The king, therefore, would have to go to magicians.

As the answers to his questions were so different, the king was not satisfied and gave no reward. Instead, he decided to seek the advice of a certain hermit, who was widely known for his wisdom.

The hermit lived in a wood which he never left. He saw no one but simple people, and so the king put on ordinary clothes. Before he reached the hermit’s hut the king left his horse with his bodyguard, and went on alone.

As the king came near the hermit’s hut, he saw the hermit digging the ground in front of his

hut. He greeted the king and continued digging. The hermit was old and weak, and as he worked, he breathed heavily.

The king went up to the hermit and said, “I have come to you, wise hermit, to ask you to answer three questions: How can I learn to do the right thing at the right time? Who are the people I need most? And what affairs are the most important?”

The hermit listened to the king, but did not speak. He went on digging. “You are tired,” said the king. “Let me take the spade and work in your place.”

“Thanks,” said the hermit, giving the king his spade. Then he sat down on the ground. 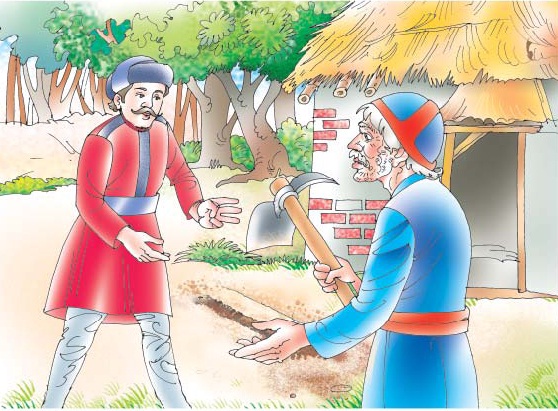 When the king had dug two beds, he stopped and repeated his questions. The hermit gave no answer, but stood up, stretching out his hand for the spade, and said, “Now you rest, and let me work.” But the king did not give him the spade and continued to dig.

One hour passed, then another. The sun went down behind the trees, and at last the king stuck the spade into the ground and said, “I came to you, wise man, for an answer to my questions. If you can give me no answer, tell me so and I will return home.”

1. Why did the king want to know answers to three questions?
2. Messengers were sent throughout the kingdom

(i) to fetch wise men.
(ii) to find answers to the questions.
(iii) to look for the wise hermit.
(iv) to announce a reward for those who could answer the questions.

The king turned round and saw a bearded man running towards them. His hands were pressed against his stomach, from which blood was flowing. When he reached the king he fainted and fell to the ground. The king and the hermit removed the man’s clothing and found a large

wound in his stomach. The king washed and covered it with his handkerchief, but the blood would not stop flowing. The king re-dressed the wound until at last the bleeding stopped.

The man felt better and asked for something to drink. The king brought fresh water and gave it to him. By this time the sun had set and the air was cool. The king with the hermit’s help carried the wounded man into the hut and laid him on the bed. The man closed his eyes and lay quiet. The king, tired by his walk and the work he had done, lay down on the floor and slept through the night. When he awoke, it was several minutes before he could remember 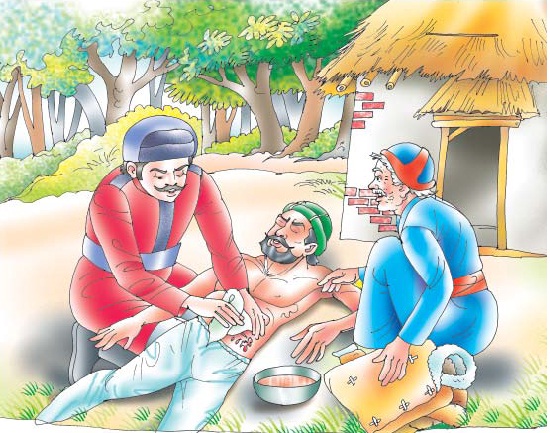 where he was or who the strange bearded man lying on the bed was.

“Forgive me!” said the bearded man in a weak voice, when he saw that the king was awake.

“I do not know you and have nothing to forgive you for,” said the king.

“You do not know me, but 1 know you. 1 am that enemy of yours who swore revenge on you, because you put my brother to death and seized my property. I knew you had gone alone to see that hermit, and I made up my mind to kill you on your way home. But the day passed and you did not return. So I left my hiding-place, and I came upon your bodyguard, who recognised me and wounded me. I escaped from him but I should have died if you had not dressed my wounds. I wished to kill you, and you have saved my life. Now, if I live, I will serve you as your most faithful servant and will order my sons to do the same. Forgive me!”

The king was very happy to have made peace with his enemy so easily, and to have won him over as a friend. He not only forgave him but said he would send his servants and his own doctor to look after him, and he promised to give back the man his property.

Leaving the wounded man, the king went out of the hut and looked round for the hermit. Before going away he wished once more to get answers to his questions. The hermit was on his knees sowing seeds in the beds that had been dug the day before. The king went up to the hermit and said, “For the last time I beg you to answer my questions, wise man.”

“You have already been answered!” said the hermit still bending down to the ground and looking up at the king as he stood before him.

“How have I been answered? What do you mean?”

“Remember then, there is only one time that is important and that time is ‘Now’. It is the most important time because it is the only time we have any power to act.

“The most necessary person is the person you are with at a particular moment, for no one knows what will happen in the future and whether we will meet anyone else. The most important business is to do that person good, because we were sent into this world for that purpose alone.”

1. Why was the king advised to go to magicians?
2. In answer to the second question, whose advice did the people say would be important to the king?
3. What suggestions were made in answer to the third question?
4. Did the wise men win the reward? If not, why not?
5. How did the king and the hermit help the wounded man?
6. (i) Who was the bearded man?
(ii) Why did he ask for the king’s forgiveness?
7. The king forgave the bearded man. What did he do to show his forgiveness?
8. What were the hermit’s answers to the three questions?
Write each answer separately. Which answer do you like most, and why?

2. Each of the following sentences has two blanks. Fill in the blanks with appropriate forms of the word given in brackets.

1. Imagine you are the king. Narrate the incident of your meeting the hermit. Begin like this:

The wise men answered my questions, but I was not satisfied with their answers. One day I decided to go and meet the hermit…

2. Imagine you are the hermit. Write briefly the incident of your meeting the king. Begin like this: One day I was digging in my garden. A man in ordinary clothes came to see me. I knew it was the king…
Do you know…
Does an ostrich really stick its head in the sand to hide from an enemy?

You may have seen a squirrel sitting on the ground eating a nut. What did it look like? Here is a poet’s description of just such a squirrel.
He wore a question mark for tail, 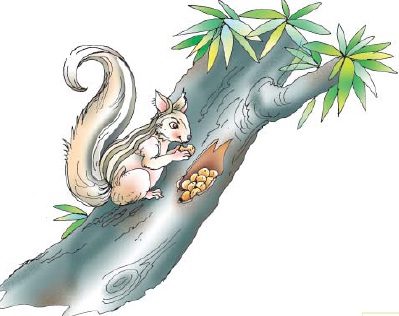 An overcoat of gray, He sat up straight to eat a nut. He liked to tease and play, And if we ran around his tree, He went the other way.

1. Why does the poet say the squirrel “wore a question mark for tail”? Draw a squirrel, or find a picture of a squirrel sitting on the ground. How would you describe its tail?
2. Do we usually say that an animal ‘wears’ a tail? What do we say? (Think: Does an animal wear a coat? Consult a dictionary if you like, and find out how ‘wear’ is used in different ways.)
3. “He liked to tease and play”. Who is teasing whom? How ?