Before You Read
Fire is both useful and dangerous. What is fire?

How did we discover it? How do we control it?

arly man didn’t know what fire was, but he must have seen the damage it could cause. He must have watched lightning and volcanoes long before he began to use fire himself. Fire was powerful and dangerous, and he was frightened.

Fire may have puzzled early man but we now know that fire is the result of a chemical reaction. When the oxygen in the air combines with carbon and hydrogen in a fuel, a chemical reaction takes place. Energy in the form of heat and light is released in this process. This is what we call fire.

Three things are needed to make fire— fuel, oxygen and heat. Wood, coal, cooking gas and petrol are some examples of fuel. Oxygen comes from the air. That is why, when you blow on smouldering paper, it often bursts into flame. The third thing needed to make fire is heat. Fuel and oxygen do not make fire by themselves, or else a newspaper or a stick lying in the open would catch fire on its own. To burn a piece of paper or wood, 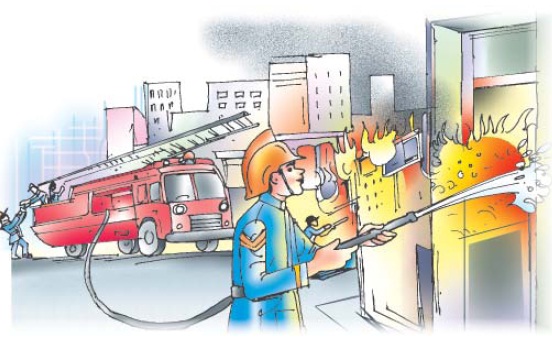 we heat it before it catches fire. We generally do it with a lighted match. Every fuel has a particular temperature at which it begins to burn. This temperature is called the ‘flash point’ or ‘kindling temperature’ of the fuel.

It is sometimes said that fire is a good servant but a bad master. It only means that fire is very useful as long as it is kept under control.

For instance, we use it to cook our food, warm our homes in winter and to generate electricity. But, on the other hand, if fire gets out of control it can be very dangerous. Each year thousands of homes and shops are damaged by fire. Vast areas of forest are also destroyed and hundreds of people are killed or injured.

Just as three things are needed to start a fire, there are three main ways in which a fire can be put out. In each, one of the three things needed for burning is taken away.

For example, we can take away the fuel. If the fire has no fuel to feed on, no burning can take place. We often let a fire die out simply by not adding more fuel to it.

The second way of putting out a fire is to prevent oxygen from reaching it. No supply of oxygen means no fire. Small fires can be put out or ‘smothered’ with a damp blanket or a sack. This stops oxygen reaching the burning material. Sometimes, carbon dioxide is used to extinguish fire. It does not allow oxygen to reach the burning material.

The third way of putting out a fire is to remove the heat. If the temperature can be brought down below the flash point, the fuel stops burning. You blow on a burning matchstick or a candle to put it out. In doing so, you remove the hot air around the flame bringing down its temperature below the flash point, and the candle goes out. Sometimes, water is sprayed on a fire. It absorbs heat from the burning fuel and lowers the temperature. The blanket of water also cuts off the supply of oxygen, and the fire is extinguished.

Some fires cannot be put out with water. If water is sprayed onto an oil fire, the oil will float to the top of the water and continue to burn. This can be very dangerous because water can flow quickly, carrying the burning oil with it and spreading the fire. Water should also not be used on fires caused by electrical appliances. The person spraying water might receive an electric shock and be killed. A carbon dioxide extinguisher is the best thing to fight an electrical fire.

We spend millions of rupees each year in fighting fires. And we spend more trying to find new ways of preventing fires from happening and getting out of control. On the whole, we have learnt rather well to control fire and put it to good use in our everyday life.

Long ago, there were no firemen. When fire broke out, everybody became a firefighter. People formed human chains (they still do if required) and passed buckets of water from a well or a pond to the blaze. Now there are laws about building construction which ensure that space is left between buildings to reduce the fire risk. Every new building, especially a public place, must ensure observance of fire prevention norms. Bands of firefighting workers with special equipment, known as fire brigades, are there to put out fires. Firefighters are highly trained people. They possess many skills. They cut off electricity supply, knock down dangerous walls, spray water and other materials to bring fire under control.

They are also trained in first aid so that

they can help people suffering from burns or from the effects of smoke.

The discovery of fire and its uses helped early man to cope with nature better and gradually adopt a settled mode of life. Fire is still worshipped in many parts of the world. Fire is indeed a friend but, as we know, it can be a dangerous enemy once it gets out of control.

1. Mark the correct answer in each of the following.
(i) Early man was frightened of
(a) lightning and volcanoes.
(b) the damage caused by them.
(c) fire.
(ii) (a) Fire is energy.
(b) Fire is heat and light.
(c) Fire is the result of a chemical reaction.

2. From the boxes given below choose the one with the correct order of the following sentences.

(i) That is fire.
(ii) A chemical reaction takes place.
(iii) Energy in the form of heat and light is released.
(iv) Oxygen combines with carbon and hydrogen.

1. What do you understand by the ‘flash point’ of a fuel?

3. Match items in Column A with those in Column B. 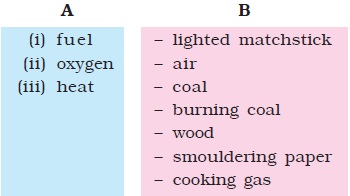 4. What are the three main ways in which a fire can be controlled or put out?

5. Match the items in Box A with those in Box B 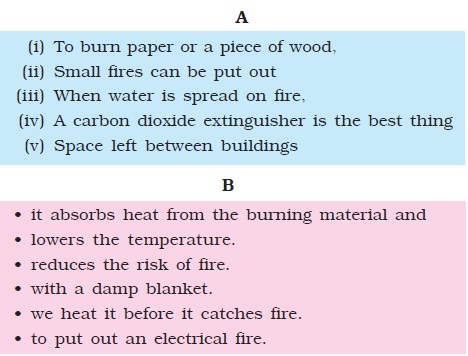 6. Why does a burning candle go out when you blow on it?

7. Spraying water is not a good way of putting out an oil fire or an electrical fire. Why not?

8. What are some of the things you should do to prevent a fire at home and in the school?

To burn paper or a piece of wood, we heat it before it catches fire. We generally do it with a lighted match. Every fuel has a particular temperature at which it burns.

The verbs in italics are in the simple present tense. When we use it, we are not thinking only about the present. We use it to say that something happens all the time or repeatedly, or that something is true in general.

Find ten examples of verbs in the simple present tense in the text ‘Fire: Friend and Foe’ and write them down here. Do not include any passive verbs.

2. Fill in the blanks in the sentences below with words from the box. You may use a word more than once.

(vi) When asked by an ambitious writer whether he should put some _____________into his stories, Somerset Maugham murmured, “No, the other way round”.

3. One word is italicised in each sentence. Find its opposite in the box and fill in the blanks.

(ii) PUPIL: What mark did I get in yesterday’s Maths test? TEACHER: You got what you get when you add five and five and___________ ten from the total.

(iv) If a doctor advises a lean and lanky patient to reduce his weight further, be sure he is doing it to _______his income.

4. Use the words given in the box to fill in the blanks in the sentences below.

2. Read the following newspaper report given in the box below.

Fire Station Goes Up in Flames

A fire chief was embarrassed when a station without a smoke alarm went up in flames. The building and a fire engine were destroyed in the blaze. Nobody was injured in the fire that was tackled by 30 firefighters in six fire engines from neighbouring towns.

Walk across a green field, a park or even under a clump of trees, and you will notice many wonderful things. What are some of the surprises a meadow has for someone with a keen eye and a sharp ear?

Meadows have surprises,
You can find them if you look;
Walk softly through the velvet grass,
And listen by the brook.

You may see a butterfly
Rest upon a buttercup
And unfold its drinking straws
To sip the nectar up.

You may scare a rabbit
Who is sitting very still;
Though at first you may not see him,
When he hops you will.

A dandelion whose fuzzy head
Was golden days ago
Has turned to airy parachutes
That flutter when you blow.

Explore the meadow houses,
The burrows in the ground,
A nest beneath tall grasses,
The ant’s amazing mound.

Oh! Meadows have surprises
And many things to tell;
You may discover these yourself,
If you look and listen well.

1. Read the lines in which the following phrases occur. Then discuss with your partner the meaning of each phrase in its context.
(i) velvet grass
(ii) drinking straws
(iii) meadow houses
(iv) amazing mound
(v) fuzzy head

2. Which line in the poem suggests that you need a keen eye and a sharp ear to enjoy a meadow? Read aloud the stanza that contains this line.

3. Find pictures of the kinds of birds, insects and scenes mentioned in the poem.

4. Watch a tree or a plant, or walk across a field or park at the same time everyday for a week. Keep a diary of what you see and hear. At the end of the week, write a short paragraph or a poem about your experiences. Put your writing up on the class bulletin board.

Bees are buzzing, frogs are hopping,
Moles are digging. There’s no stopping
Vines from climbing, grass from growing,
Birds from singing, winds from blowing,
Buds from blooming. Bees are humming,
Sunbeams dancing, raindrops drumming.
All the world is whirling, dizzy,
Summertime is very busy!

Delivery Delayed
Answer
The postman started moving round the tree in circles. The dog followed him, but as he did so, his leash got wrapped around the tree. The postman then safely walked up to the front door.

Play your role in this war, with your wits as your holy weapon!