If you wish to go on a long bicycle ride, the bicycle should be in good condition. If possible, an expert mechanic should overhaul it. But what happens if the machine has a will of its own and the mechanic knows next to nothing?

A Bicycle in Good Repair

A man I knew proposed one evening we should go for a long bicycle ride together on the following day, and I agreed. I got up early, for me; I made an effort, and was pleased with myself. He came half an hour late; I was waiting for him in the garden. It was a lovely day. He said, “That’s a good-looking machine of yours.
How does it run?”

“Oh, like most of them!” I answered; “easily enough in the morning; goes a little stiffly after lunch.”

He caught hold of it by the front wheel and the fork, and shook it violently.

I did not see why he should shake it; it had not done anything to him. Besides, if it wanted shaking, I was the proper person to shake it. I felt much as I should had he started whacking my dog.

He said, “This front wheel wobbles.”

I said, “It doesn’t if you don’t wobble it.” It didn’t wobble, as a matter of fact—nothing worth calling a wobble.

He said, “This is dangerous; have you got a hammer?” I ought to have been firm, but I thought that perhaps he really did know something about the business. I went to the tool shed to see what I could find. When I came back he was sitting on the ground with the front wheel between his legs.

He was playing with it, twiddling it round between his fingers; the remnant of the machine was lying in the gravel path beside him.

He said, “It looks to me as if the bearings were all wrong.”

I said, “Don’t you trouble about it any more; you will make yourself tired. Let us put it back and get off.” 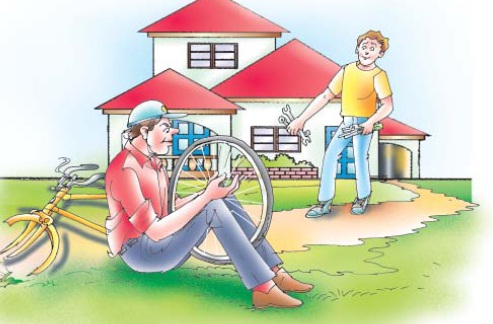 He said, “We may as well see what is the matter with it, now it is out.” He talked as though it had dropped out by accident.

Before I could stop him he had unscrewed something somewhere, and out rolled all over the path some dozen or so little balls.

“Catch ‘em!” he shouted; “catch ‘em! We mustn’t lose any of them.” He was quite excited about them.

We grovelled round for half an hour, and found sixteen. He said he hoped we had got them all, because, if not, it would make a serious difference to the machine. I put them for safety in my hat. It was not a sensible thing to do, I admit.

2. The bicycle “goes easily enough in the morning and a little stiffly after lunch.” The remark is .
(i) humorous.
(ii) inaccurate.
(iii) sarcastic.
(iv) enjoyable.
(v) meaningless.

3. The friend shook the bicycle violently. Find two or three sentences in the text which express the author’s disapproval of it.

4. “…if not, it would make a serious difference to the machine.” What does ‘it’ refer to?

He then said that while he was about it he would see to the chain for me, and at once began taking off the gear-case. I did try to dissuade him from that. I told him what an experienced friend of mine once said to me solemnly: “If anything goes wrong with your gear-case, sell the machine and buy a new one; it comes cheaper.”

He said, “People talk like that who understand nothing about machines. Nothing is easier than taking off a gear-case.”

I had to confess he was right. In less than five minutes he had the gear-case in two pieces, lying on the path, and was grovelling for screws. He said it was always a mystery to him the way screws disappeared.

Common sense continued to whisper to me: ‘Stop him, before he does any more mischief. You have a right to protect your own property from the ravages of a lunatic. Take him by the scruff of the neck, and kick him out of the gate!’ But I am weak when it comes to hurting other people’s feelings, and I let him muddle on.

He gave up looking for the rest of the screws. He said screws had a knack of turning up when you least expected them, and that now he would see to the chain. He tightened it till it would not move; next he loosened it until it was twice as loose as it was before. Then he said we had better think about getting the front wheel back into its place again.

I held the fork open, and he worried with the wheel. At the end of ten minutes I suggested he 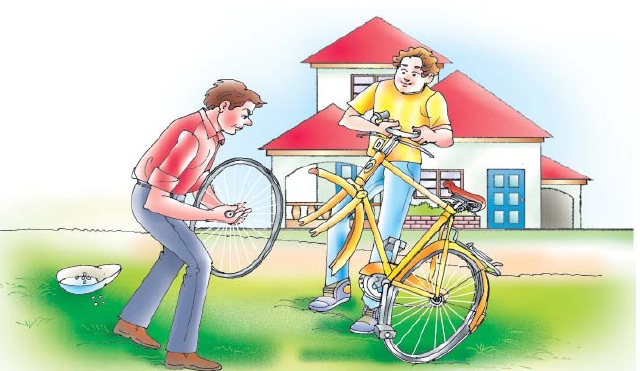 should hold the fork, and that I should handle the wheel; and we changed places.

At length we did get the thing into position; and the moment it was in position he burst out laughing.

It was the first thing he had said that made me respect him. I asked him what had led him to the discovery.

I looked for my hat; it was lying topsy-turvy in the middle of the path.

He was of a cheerful disposition. He said, “Well, we must put back all we can find, and trust to providence.”

We found eleven. We fixed six on one side and five on the other, and half an hour later the wheel was in its place again. It need hardly be added that it really did wobble now; a child might have noticed it. He said it would do for the present.

I said, “Watching you do this is of real use to me. It is not only your skill that fascinates me, it is your cheery confidence in yourself, your inexplicable hopefulness, that does me good.” Thus encouraged, he set to work to refix the gear-case. He stood the bicycle against the house, and worked from the off side. Then he stood it against a tree, and worked from the on side. Then I held it for him, while he lay on the ground with his head between the wheels, and worked at it from below, and dropped oil upon himself. Then he took it away from me, and doubled himself across it till he lost his balance and slid over on to his head.

Then he lost his temper and tried bullying the thing. The bicycle, I was glad to see, showed spirit; and the subsequent proceedings degenerated into little else than a rough-and-tumble fight between him and the machine. One moment the bicycle would be on the gravel path, and he on top of it; the next, the position would be reversed— he on the gravel path, the bicycle on him. Now he would be standing flushed with victory, the bicycle firmly fixed between his legs. But his triumph would be short-lived. By a sudden, quick movement it would free itself and, turning upon him, hit him sharply over the head with one of its handles. 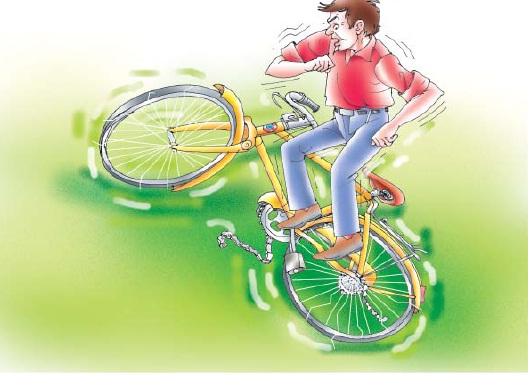 At a quarter to one, dirty and dishevelled, cut and bleeding, he said, “I think that will do”, and rose and wiped his brow.

The bicycle looked as if it also had had enough of it. Which had received most punishment it would have been difficult to say. 1 took him into the back kitchen where, so far as was possible, he cleaned himself. Then 1 sent him home.

1. Did the front wheel really wobble? What is your opinion?
Give a reason for your answer.

2. In what condition did the author find the bicycle when he returned from the tool shed?

3. “Nothing is easier than taking off the gear-case.” Comment on or continue this sentence in the light of what actually happens.

4. What special treatment did the chain receive?

5. The friend has two qualities — he knows what he is doing and is absolutely sure it is good. Find the two phrases in the text which mean the same.

6. Describe ‘the fight’ between the man and the machine. Find the relevant sentences in the text and write them.

I. Read the following sentences.

We should go for a long bicycle ride.

Look at the following.

Note: ‘Should’ and ‘ought to’ are often used interchangeably.

Rewrite each of the following sentences using should/ ought to/must in place of the italicised words. Make other changes wherever necessary.

(i) You are obliged to do your duty irrespective of consequences.

(ii) You will do well to study at least for an hour every day.

(iii) The doctor says it is necessary for her to sleep eight hours every night.

(iv) It is right that you show respect towards elders and affection towards youngsters.

(v) If you want to stay healthy, exercise regularly.

(vi) It is good for you to take a walk every morning.

(vii) It is strongly advised that you don’t stand on your head.

Read the following.
I made an effort, and was pleased with myself.

This sentence is in fact a combination of two sentences.

I did not see why he should shake it.

This is also a combination of two sentences.

Divide each of the following sentences into its parts. Write meaningful parts. If necessary, supply a word or two to make each part meaningful.

‘en’ at the beginning or at the end of a word is not always a prefix or a suffix. It is then an integral part of the word.

(i) Now arrange the words given in the box under the three headings — prefix, suffix and part of the word.

(ii) Find new words in your textbook and put them under the same headings.

Have you ever seen a snake fighting a mongoose, or getting into a hole, or swimming in the river? Everyone, almost everyone, believes that snakes are dangerous. Some are, most are not. Read this poem on a harmless garden snake.

I saw a snake and ran away…
Some snakes are dangerous, they say;
But mother says that kind is good,
And eats up insects for his food.
So when he wiggles in the grass
I’ll stand aside and watch him pass,
And tell myself, “There’s no mistake,
It’s just a harmless garden snake!”

(i) Pick out the line that suggests that the child is afraid of snakes.

(ii) Which line shows a complete change of the child’s attitude towards snakes? Read it aloud.

(iii) “But mother says that kind is good…” What is mother referring to?

2. Find the word that refers to the snake’s movements in the grass.

3. There are four pairs of rhyming words in the poem. Say them aloud.

4. A snake has no legs or feet, but it moves very fast. Can you guess how? Discuss in the group.

5. Can you recall the word used for a cobra’s long sharp teeth? Where did you come across this word first?
Do you know…

If you show love to plants or expose them to classical music, they grow well. Is this true ?