Sport is an integral part of a healthy life. It is one way in which we amuse ourselves, compete with each other and stay fit. Among the various sports such as hockey, football and tennis, cricket appears to be the most appealing national entertainment today. How much do we really know about the game called ‘cricket’?

The Story of Cricket 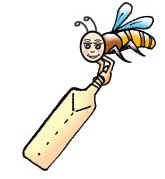 Cricket grew out of the many stick-and-ball

games played in England 500 years ago. The word ‘bat’ is an old English word that simply means stick or club. By the seventeenth century, cricket had evolved enough to be recognisable as a distinct game. Till the middle of the eighteenth century, bats were roughly the same shape as hockey sticks, curving outwards at the bottom. There was a simple reason for this: the ball was bowled underarm, along the ground and the curve at the end of the bat gave the batsman the best chance of making contact.

in a draw. No other modern team sport takes even half as much time to complete. A football match is generally over in an hour-and-a-half. Even baseball completes nine innings in less than half the time that it takes to play a limited-overs match, the shortened version of modern cricket!

Another curious characteristic of cricket is that the length of the pitch is specified—22 yards— but the size or shape of the ground is not. Most other team sports such as hockey and football lay down the dimensions of the playing area.
Cricket does not. Grounds can be oval like the Adelaide Oval or nearly circular, like Chepauk in Chennai. A six at the Melbourne Cricket Ground needs to clear much more ground than it does at Feroz Shah Kotla in Delhi.

There’s a historical reason behind both these oddities. Cricket was the earliest modern team sport to be codified. The first written ‘Laws of Cricket’ were drawn up in 1744. They stated, “the principals shall choose from amongst the gentlemen present two umpires who shall absolutely decide all disputes. The stumps must be 22 inches high and the bail across them six inches. The ball must be between five and six ounces, and the two sets of stumps 22 yards

apart”. The world’s first cricket club was formed in Hambledon in the1760s and the Marylebone Cricket Club (MCC) was founded in 1787. During the 1760s and 1770s it became common to pitch the ball through the air rather than roll it along the ground. This change gave bowlers the options of length, deception through the air, plus increased pace. It also opened new possibilities for spin and wing. In response, batsmen had to master timing and shot selection. One immediate result was the replacement of the curved bat with the straight one. The weight of the ball was limited to between 5½ to 5½ ounces, and the width of the bat to four inches. In 1774, the first leg-before law was published. Also around this time, a third stump became common. By 1780, three days had become the length of a major match, and this year also saw the creation of the first six-seam cricket ball. 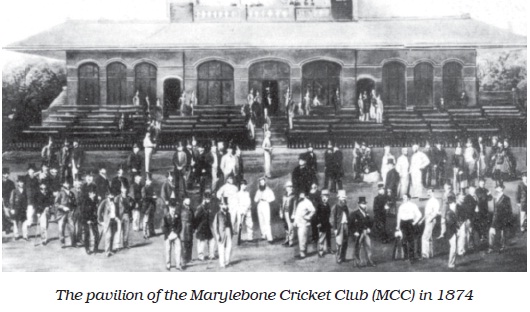 If you look at the game’s equipment, you can see how cricket both changed with changing times and yet fundamentally remained true to its origins in rural England. Cricket’s most important tools are all made of natural, preindustrial materials. The bat is made with leather, twine and cork. Even today both bat and ball are handmade, not industrially manufactured. The material of the bat changed slightly over time. Once it was cut out of a single piece of wood. Now it consists of two pieces, the blade which is made out of the wood of the willow tree and the handle which is made out of cane that became available as European colonialists and trading companies established themselves in Asia. Unlike golf and tennis, cricket has 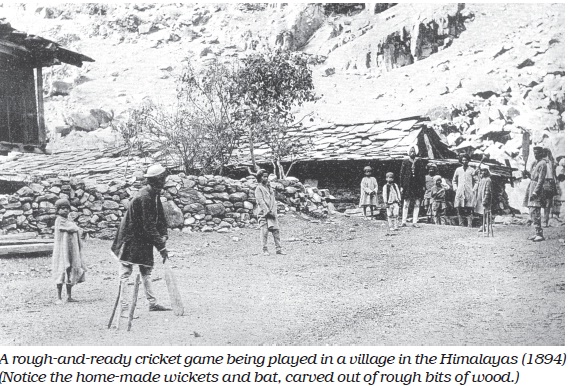 refused to remake its tools with industrial or man-made materials: plastic, fibreglass and metal have been firmly rejected.

But in the matter of protective equipment, cricket has been influenced by technological change. The invention of vulcanised rubber led to the introduction of pads in 1848 and protective gloves soon afterwards, and the modern game would be unimaginable without helmets made out of metal and synthetic lightweight materials.

2. “There is a historical reason behind both these oddities.” In the preceding two paragraphs, find two words/phrases that mean the same as ‘oddities’.

3. How is a cricket bat different from a hockey stick?

Oriental Cricket Club, in Bombay in 1848. Parsi clubs were funded and sponsored by Parsi businessmen like the Tatas and the Wadias. The white cricket elite in India offered no help to the enthusiastic Parsis. In fact, there was a quarrel between the Bombay Gymkhana, a whites-only club, and Parsi cricketers over the use of a public park. The Parsis complained that the park was left unfit for cricket because the polo ponies of the Bombay Gymkhana dug up the surface. When it became clear that the colonial authorities were prejudiced in favour of their white compatriots, the Parsis built their own gymkhana to play cricket in. The rivalry between the Parsis and the Bombay Gymkhana had a happy ending for these pioneers of Indian cricket. A Parsi team beat the Bombay
Gymkhana at cricket in 1889, just four years after 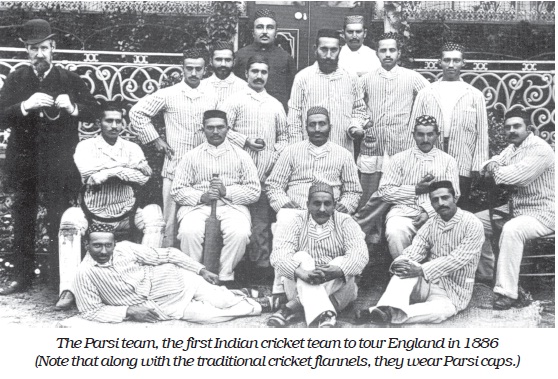 the foundation of the Indian National Congress in 1885, an organisation that was lucky to have amongst its early leaders the great Parsi statesman and intellectual Dadabhai Naoroji.

Modern cricket is dominated by Tests and one-day internationals, played between national teams. The players who become famous, who live on in the memories of cricket’s public, are those who have played for their country. The players Indian fans remember even now are those who were fortunate enough to play Test cricket. C.K. Nayudu, an outstanding Indian batsman of his time, lives on in the popular imagination when some of his great contemporaries like Palwankar Vithal and Palwankar Baloo have been forgotten. Even though Nayudu was past his cricketing prime when he played for India in its first Test matches against England starting in 1932, his place in India’s cricket history is assured because he was the country’s first Test captain.

India entered the world of Test cricket in 1932, a decade and a half before it became  n
independent nation. This was possible because

Test cricket from its origins in 1877 was organised as a contest between different parts of the British empire, not sovereign nations. The first Test was played between England and Australia when Australia was still a white-settler colony. Similarly, the small countries of the Caribbean that together make up the West Indies team were British colonies till well after the Second World War.

Write True or False against each of the following sentences.
(i) India joined the world of Test cricket before Independence. ______________

(ii) The colonisers did nothing to encourage the Parsis in playing cricket.___________

Television coverage changed cricket. It expanded the audience for the game by beaming cricket into
small towns and villages. It also broadened cricket’s social base. Children who had never previously had the chance to watch international cricket because they lived outside the big cities, could now watch and learn by imitating their heroes.

The technology of satellite television and the world-wide reach of multi-national television companies created a global market for cricket. Matches in Sydney could now be watched live in Surat. Since India had the largest viewership for the game amongst the cricket-playing nations and the largest market in the cricketing world, the game’s centre of gravity shifted to South Asia. This shift was symbolised by the shifting of the ICC headquarters from London to tax-free Dubai.

One hundred and fifty years ago the first Indian cricketers, the Parsis, had to struggle to find an open space to play in. Today, the global marketplace has made Indian players the best-paid, most famous cricketers in the game, men for whom the world is a stage. This transformation was made up of many smaller changes: the replacement of the gentlemanly amateur by the paid professional, the triumph of the one-day game as it overshadowed Test cricket in terms of popularity, and the remarkable changes in global commerce and technology.

RAMACHANDRA GUHA
[adapted from Chapter 7 of
India and the Contemporary World – I,
Textbook in History for Class IX, NCERT]

(i) It refers to the famous cricket fields in the world.
(ii) It means that there are many cricket playing countries in the world.
(iii) It implies that cricketers are like actors and every cricket ground is like a stage on which the drama of cricket is
enacted the world over.

1. Name some stick-and-ball games that you have witnessed or heard of.

2. The Parsis were the first Indian community to take to cricket. Why?

3. The rivalry between the Parsis and the Bombay Gymkhana had a happy ending for the former. What does ‘a happy ending’ refer to?

4. Do you think cricket owes its present popularity to television? Justify your answer.

5. Why has cricket a large viewership in India, not in China or Russia?

6. What do you understand by the game’s (cricket) ‘equipment’?

7. How is Test cricket a unique game in many ways?

8. How is cricket different from other team games?

9. How have advances in technology affected the game of cricket?

10. Explain how cricket changed with changing times and yet remained unchanged in some ways.

Clues to the hidden words are given below.

Horizontal : six deliveries, four runs, attacked while out of arena, no result, stumps, fielder to the off side of the wicketkeeper

Vertical : stumps flying, back to the pavilion, a lofty one, mid-air mishap, not even one out of six, goes with bat 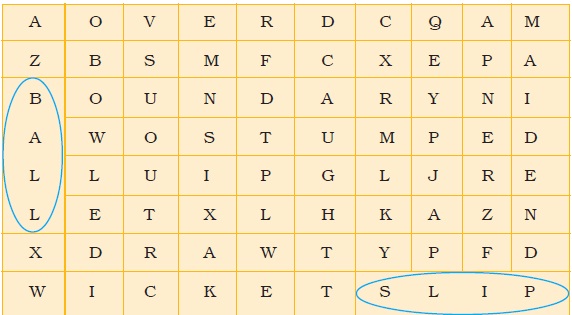 2. Add -ly to the italicised word in each sentence. Rewrite the sentence using the new word. See the examples first.

(i) It is obvious that the work has not been done in a proper way.

(ii) He made the statement in a firm manner.

(iii) The job can be completed within a week in an easy way.

(iv) You did not play in a serious manner, or else you would have won the match.

(v) She recited the poem in a cheerful manner.

3. Use the following phrases appropriately in place of the italicised words in the sentences given below.

(i) Actually, I didn’t intend to come to your place. I reached here without planning.

(ii) Sunil, there’s a letter for you in today’s post. There’s one for me also.

(iii) Everybody thought I had composed the poem. The truth is my younger sister did it.

(iv) The doctor told the patient to make sure that he took his pills on time.

(v) It will be better for us to plan our trip before setting out.

1. Complete each of the following words using gh, ff or f. Then say each word clearly after your teacher.

2. Write two paragraphs describing a bus ride to watch a cricket match in a village. Use the following points. Add some of your own.

Do you know…
Answer

According to some botanists, plants are able to sense the vibrations of music through their stomata. How this occurs is not yet known. Yields of some crops are reported to have increased substantially when the plants were exposed to music. Many plant lovers, including Prince Charles of Britain, believe that talking to plants makes them grow better.