In a binary solution, solvent is the component which is present in large quantity while the other component is known as solute.

(A) Following types of solutions are seen on the basis of physical state of solute and solvent. 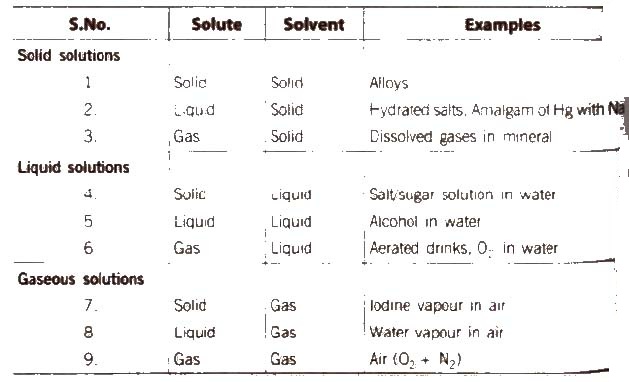 (B) Depending upon the amount of solute dissolved in a solvent we have the following types of solutions:

The maximum amount of a solute that can be dissolved in a given amount of solvent (generally 100 g) at a given temperature is termed as its solubility at that temperature.

The solubility of a solute in a liquid depends upon the following factors:

Greater the value of KH, higher the solubility of the gas. The value of KH decreases with increase in the temperature. Thus, aquatic species are more comfortable in cold water [more dissolved O2] rather than Warm water.

1. In manufacture of soft drinks and soda water, CO2 is passed at high pressure to increase its solubility.
2. To minimise the painful effects (bends) accompanying the decompression of deep sea divers. O2 diluted with less soluble. He gas is used as breathing gas.
3. At high altitudes, the partial pressure of O2 is less then that at the ground level. This leads to low concentrations of O2 in the blood of climbers which causes ‘anoxia’.

Methods of Expressing Concentration of Solutions

Various expression for the concentrations of solutions can be summarised as

or the volume of solute present in 100 mL of solution.

(iv) Parts per million (ppm) It is defined as the parts of a component per million parts (106) of the solution. It is widely used when a solute is present in trace quantities.

(v) Molarity (M) It is the number of moles of solute present in 1L(dm3) of the solution.

M = number of moles of solute / volume of solution (L)

Molarity varies with temperature due to change in volume of solution.

where, n1 and n2 arc stoichiometric coefficient in balanced equation.

(vi) Molality (m) It is the number of moles of solute per kilogram of the solvent.

Molality is independent of temperature.

(vii) Normality (N) The number of gram equivalents of solute present in 1 L of solution.

If two solutions of the same solute having volumes and molarities V1, M1 and V2, M2 are mixed, the molarity of the resulting solution is

To dilute V1 mL of a solution having molarity M1 to molarity M2 up to the final volume V2 mL, the volume of water added is

(viii) Formality (F) It is the number of formula weights of solute present per litre of the solution.

Molality, mole fraction and mass fraction are preferred over molarity, normality, etc., because former involve weights which do not change with temperature.

(x) Demal (D) It represents one mole of solute present in 1L of solution at O°C.

For a solution containing two liquids A and B, the partial vapour pressure of liquid A is

The proportionality constant is obtained by considering the pure liquid when χA = 1 then k = P°A, the vapour pressure of pure liquid, hence 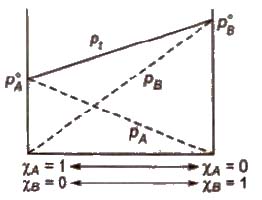 (iii) ΔVmix = 0 (No expansion or contraction on mixing)

Those solutions which shows deviation from Raoult’s law is called non-ideal solution. 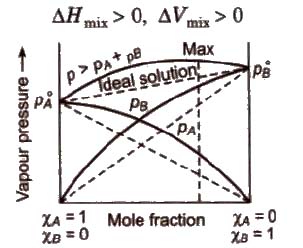 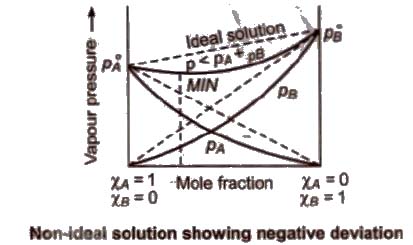 A mixture of two liquids which boils at a particular temperature like a pure liquid and distils over in the same composition is known as constant boiling mixtures. These are formed by non-ideal solutions.

(i) Minimum boiling azeotropes are formed by those liquid pairs which show positive deviation from ideal behaviour. Such azeotropes have boiling points lower than either of the components, e.g., C2H5OH (95.57%) + H2O (4.43%)(by mass).

(ii) Maximum boiling azeotropes are formed by those liquid pain; which show negative deviation from ideal behaviour. Such azeotropes have boiling points higher than either of the components. e.g., H2O(20.22O%)+ HCl (79.78%] by mass.

Colligative properties are those properties which depends only upon the number of solute particles in a solution irrespective of their nature. 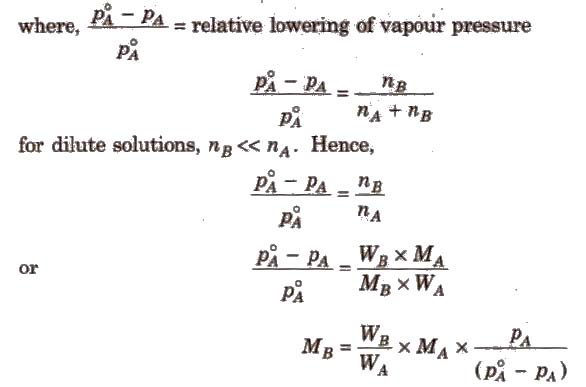 Ostwald and Walker method is used to determine the relative lowering of vapour pressure. 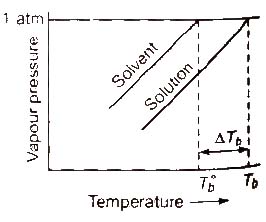 Kb is molal elevation constant or ebullioscopic constant. Molecular mass of solute can be calculated as

where, WB and WA = mass of solute and solvent respectively.

The boiling point elevation of a solution is determined by 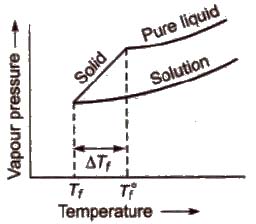 To find molecular mass of solute,

where, Kf is molal depression constant or cryoscopic constant.

Ethylene glycol is usually added to water in the radiator to lower its freezing point. It is called antifreeze solution.

[Common salt (NaCI) and anhydrous CaC12 are used to clear snow on the roads because they depress the freezing point of water. The freezing point depression is determined by Beckmann method or Rast method.] 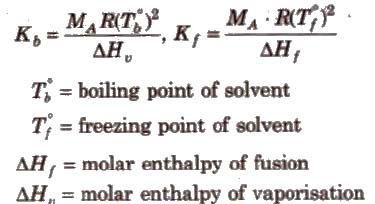 Osmosis is the phenomenon of spontaneous flow of the solvent molecules through a semipermeable membrane from pure solvent to solution or from a dilute solution to concentrated solution. It was first observed by Abbe Nollet.

CU2[Fe(CN)6]is an artificial semipermeable membrane which does not work in non-aqueous solutions as it dissolves in them.

The hydrostatic pressure developed on the solution which just prevents the osmosis of pure solvent into the solution through a semipermeable membrane is called osmotic pressure.

On the basis of osmotic pressure, -the solution can be

(i) Hypertonic solution A solution is called hypertonic if its osmotic pressure is higher than that of the solution from which it is separated by a semipermeable membrane.

When a plant cell is placed in a hypertonic solution, the fluid from the plant cell comes out and cell shrinks, this phenomenon is called plasmolysis.

(ii) Hypotonic solution A solution is called hypotonic if its osmotic pressure is lower than that of the solution from which it is separated by a semipermeable membrane.

(iii) Isotonic solution Two solutions are called isotonic if they exert the same osmotic pressure. These solutions have same molar concentration. 0.91% solution of pure NaCl is isotonic with human RBC’s.

Osmotic pressure method is the best method for determining the molecular masses of polymers since observed value of any other colligative property is too small to be measured with reasonable accuracy.

Reverse osmosis When the external pressure applied on the solution is more than osmotic pressure, the solvent flows from the solution to the pure solvent, I which is called reverse osmosis. Desalination of sea water is done by reverse Osmosis.

In some cases, observed colligative properties deviate from their normal calculated values due to association or dissociation of molecules. As we know,

These observed values are corrected by multiplying with van’t Hoff factor (i).

So to correct the observed value of molar mass, van’t Hoff factor (i) must be included in different expressions for colligative properties.

Degree of Dissociation (α) and van’t Hoff Factor (i) 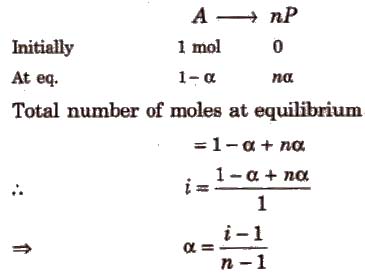 Degree of Association (α) and van’t Hoff Factor (i) 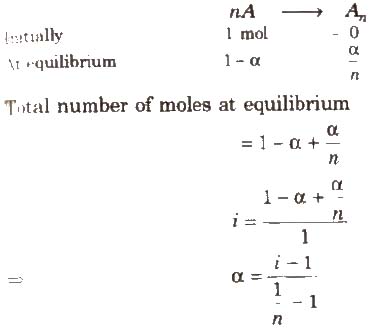